What aspects of this scene can be changed to improve it? [closed] 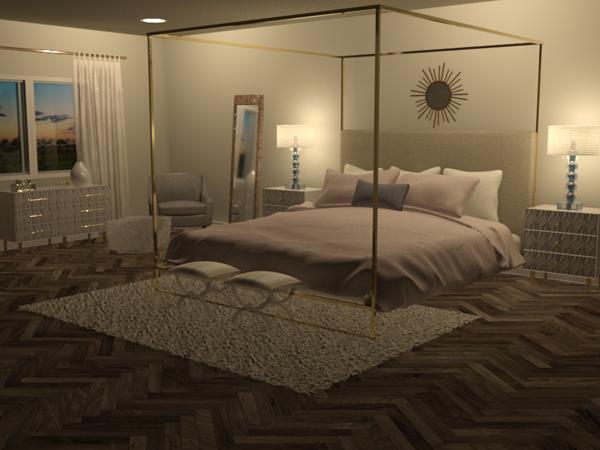 This is my first interior rendering in 3ds Max using Arnold. I've been scrutinizing it for days and would like criticism and tips from more trained eyes to make this scene more realistic.

1) I obviously lost my battle with noise reduction, is there a checklist anyone goes through to eliminate noise and fireflies from their scenes?

2) Ideally, how much post-render work would you typically do in Photoshop? (%)

3) What is your favorite way to convey realism that you think a lot of designers miss?

The focal length of your camera is inappropriate, unfortunately, which is why several folks have mentioned perspective issues - you've got perspective distortion as a result of focal length / lens choice - you need to adjust that first and foremost to get a more believable "read" from your image.

Note: most architectural / interiors clients (architects and interior designers) want to tell the whole story through one rendered image (both to save money and due to their own internal beliefs based on learning to hand-render and how time consuming it is) and so push for inappropriately wide camera angles. This is almost always a mistake.

Instead, set for a realistic camera FOV, and compose your POV as a vignette - assume you will allow elements to bleed off the image, to not be complete and unbroken. Instead, make interesting negative space shapes to aid in composition - compose the whole image using the rule of thirds or Fibbonaci numbers, the Golden Ratio whether expressed as rectangles, spirals or both. Especially true with interiors, be sure to place your camera's station point such to get eye height to be pretty close to a human-expectable standard - most people find it extremely disorienting to be in an interior, with no clear support other than the floor, and yet have the subconscious eye height set to 9'-6" - they can't "read" the image correctly.

Added to this, you have your camera pointing downwards versus mostly horizontally, resulting in an unnatural experience of the horizonline, and adding an uncomfortable perspective force to the verticals of the bed and the wall corner intersections - all over-emphasised due to your camera's downward view angle. Most of the time, architectural visualisations tend to reserve "bird's-eye perspective" (with the focal point far below the eye/camera station point, and the horizontal vanishing points off-image, and the vertical vanishing point beneath the floor and so darn close) like this for exterior views, and specifically exterior of multi-story high-rise - because in that brief, you actually want to over-emphasise the verticals, and that taut sense one gets of them receding vertiginously away from the viewer - to drive home the "wow this building's tall and we're just a tiny, flying spec compared to it" feeling - but it's really out-of-place in an interior, and especially an interior of a small room. Makes it seem the viewer is in a fever-dream.

Only after you reconceptualise the camera setup, POV and image layout, then you can look at the myriad other technical issues everyone has noted.

I will restrict my response here to the highest priority of those: lighting overall, and attendant with that shading / shadow-casting. Your lighting solution seems really poor - I note that though your lampshades "glow", it doesn't seem like that light is adding to the GI at the wall or the dressers on which those lamps sit. Further, if you are using GI, you're cutting it off at far too few bounces (in interiors one tends to use far higher bounce counts than exteriors) resulting in a flat and too-dark image. If the recessed cans in the ceiling are throwing enough light to impact the walls the way they are, why is the ceiling not only dark of base colour, but not catching reflected light from the illuminated walls nearby? Too few bounces - or inappropriate light linking. The lack of proper cast shadows under items is deeply disturbing to the viewer, who must either conclude these items added after the fact or that this image shows all the worst sins of poor CG with none of the benefits - you're forcing them to perceive your image as being in the uncanny valley. Also your background environment image should be part of an IBL approach, but right now I see no sign that there's any light being cast from outside the window into your scene - adds to the uncanny experience I'm afraid.

I think it's important to remember that even with the most amazing tools in the world, it's still a good exercise to consider your task/goals/brief first through lower-tech rubrics to inform your design decision-making: think firstly like an illustrator, and set up as though you were hand-illustrating a perspective vignette - this will aide in compositionally-humane thinking; think secondarily like an SLR photographer - set up your camera as though you were photographing this scene for a swanky hotelier client's major advertising campaign. I'd literally do a few hand-sketches of layouts prior to anything else - this will, I think, lead to you improving the floorplan of your room some, and for example, moving that mirror further towards the window so it's less scene-dominant. Remember, though you don't need to tell the whole story in one image, the images should feel narrative in some way - that's not just about adding clutter - it's about the image having something to say.

My initial thought isn't really enough to constitute a full answer, so I apologise for the brevity, but here it is anyway:

The most obvious thing to me is the lack of shadows cast by the furniture on the carpets and walls. The furniture looks like it has been cut out, and stuck on.

There are 3 questions here...

Ideally, how much post-render work would you typically do in Photoshop?

Convey a realism that you think a lot of designers miss?

I do not know if a lot of designers... but this is the case of your image... shadows...

This is a matter of settings. Current technology on render engines gives you realism out of the box, but you are not exploring the settings at all. I have the feeling that you are struggling on one thing that no one will notice (noise) and you forgot to observe your scene.

Here are other posts where simple shadows will give you better looks on simple images...

How can I make 3D mockups for packaging more realistic?

How to I make this more realistic/add more depth

Blending in an Ant Render with Newspaper Background

What aspects of this scene can be changed to improve it?

Without going into too much detail......

Trying to render a full room with various objects is a very tricky thing due to lighting. It can take tens, or hundreds, of hours to get lighting correct and that's after you get positioning and perspective correct. I, personally, would never attempt something like this unless I had a couple (or several) months to finalize such a project. For me, to do it correctly would require painstakingly painting in light and shadows to match the room lighting.

The odd thing is.. if you are using a 3D rendering application, why is the lighting so horribly incorrect and missing shadows? Typically 3D rendering lighting is better because it calculates light casting properly. But I don't know your process, or how the image was configured, or how the particular 3D engine you've used functions.

It has too dark foreground. If it has nothing worth to be seen properly, it can be left out. I would put one light more, because the largeness of the room is a good thing to be seen.

Your image has colors like the lamps emitted light only at few discrete wavelengths leaving huge gaps in the spectrum. That makes colors faint. That's actually super realistic with some common lamp types. Sub 4000K color temperature makes all yellowish and this will be exaggerated if one tries to add saturation. This can be seen at the end of my story.

The bed and the small chairs are indefinite. Nobody knows are they placed like people normally expect or are they levitating in front of the camera and be not bigger than one's fist. Shadows under them would fix the placement.

There's a perspective anomaly. How the frame of the bed can be wider at the ceiling? I have no idea how it's made except inserting the bed afterwards and distorting it to make it to fit. Or the camera is near the ceiling, but the cropping lets people to assume the camera is in the middle of your image.

I inserted finally a version which has some of the problems fixed afterwards. The perspective is original and the top of the bed hasn't got sharpening because it's in good light and already presented well enough. 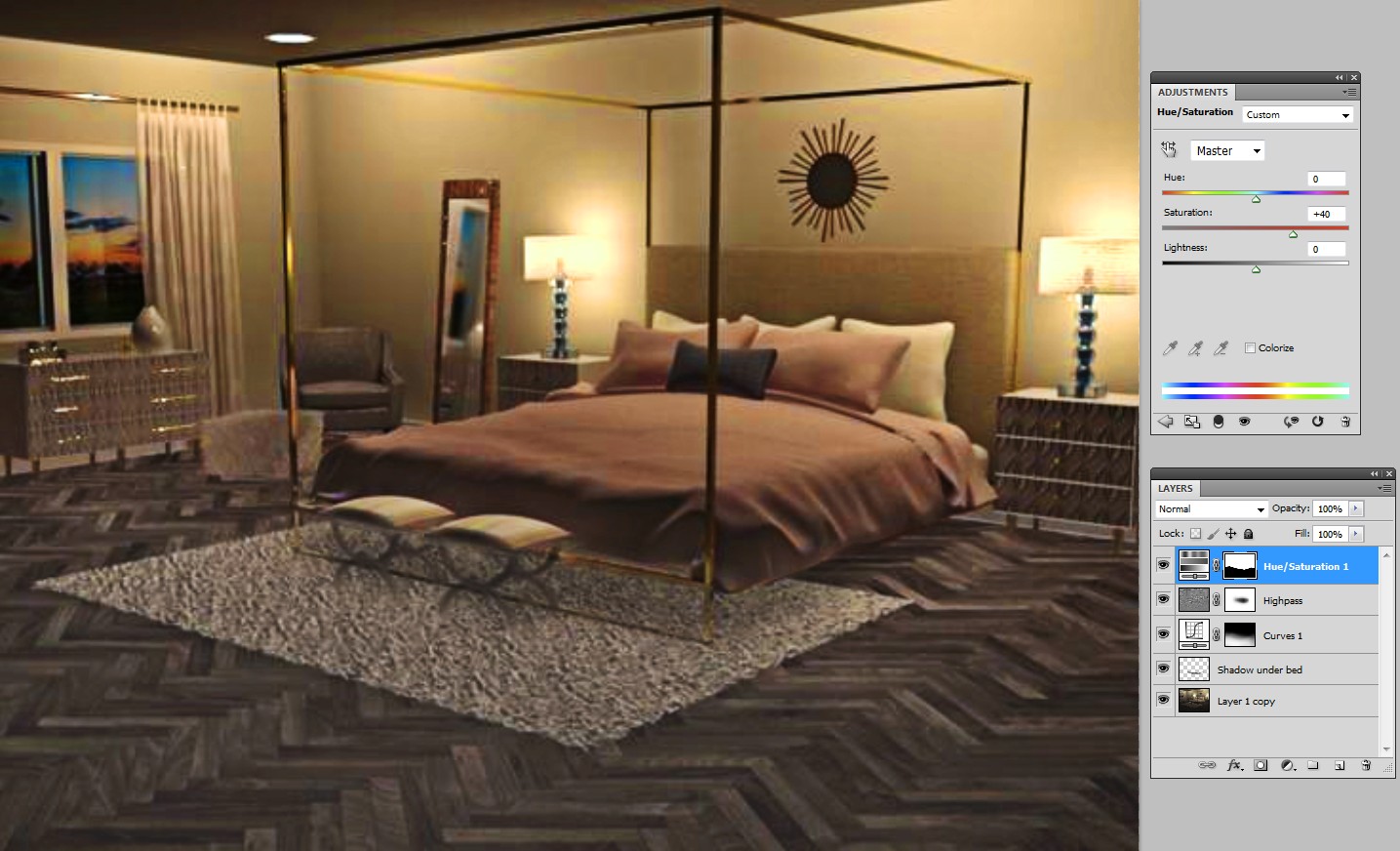 Fixes like these should be unnecessary! They create new problems such as the exaggerated yellowness and finally: They are only guesses. It's not your model any more.

Not the answer you're looking for? Browse other questions tagged critique lighting-effects noise render-settings or ask your own question.

4
Inkscape: realistic lighting and shading
2
How can I make 3D mockups for packaging more realistic?
0
Blending in an Ant Render with Newspaper Background
1
How to I make this more realistic/add more depth