I am longing for a method to get clear but shaky lines, like drawing a cartoon with china ink, such as this sample scanned from paper:

The strokes in Affinity Designer mostly use images, so the result will always be rasterized. I do not think I need such a sophisticated thing, but just a clear line with the jitter added.

Is there a way to achieve this in Affinity Designer?

Or can anyone recommend an alternative software (on the Mac) to use for this?

I'm unsure what the core issue here is, as "Brush 32" in the Assorted sampler brush pack which comes with Affinity Designer seems incredibly close to what you want right off the bat, it's snappily fast to draw with, doesn't result in large file sizes, exports happily to .svg, .pdf, .ai, and as already stated, looks pretty decent: 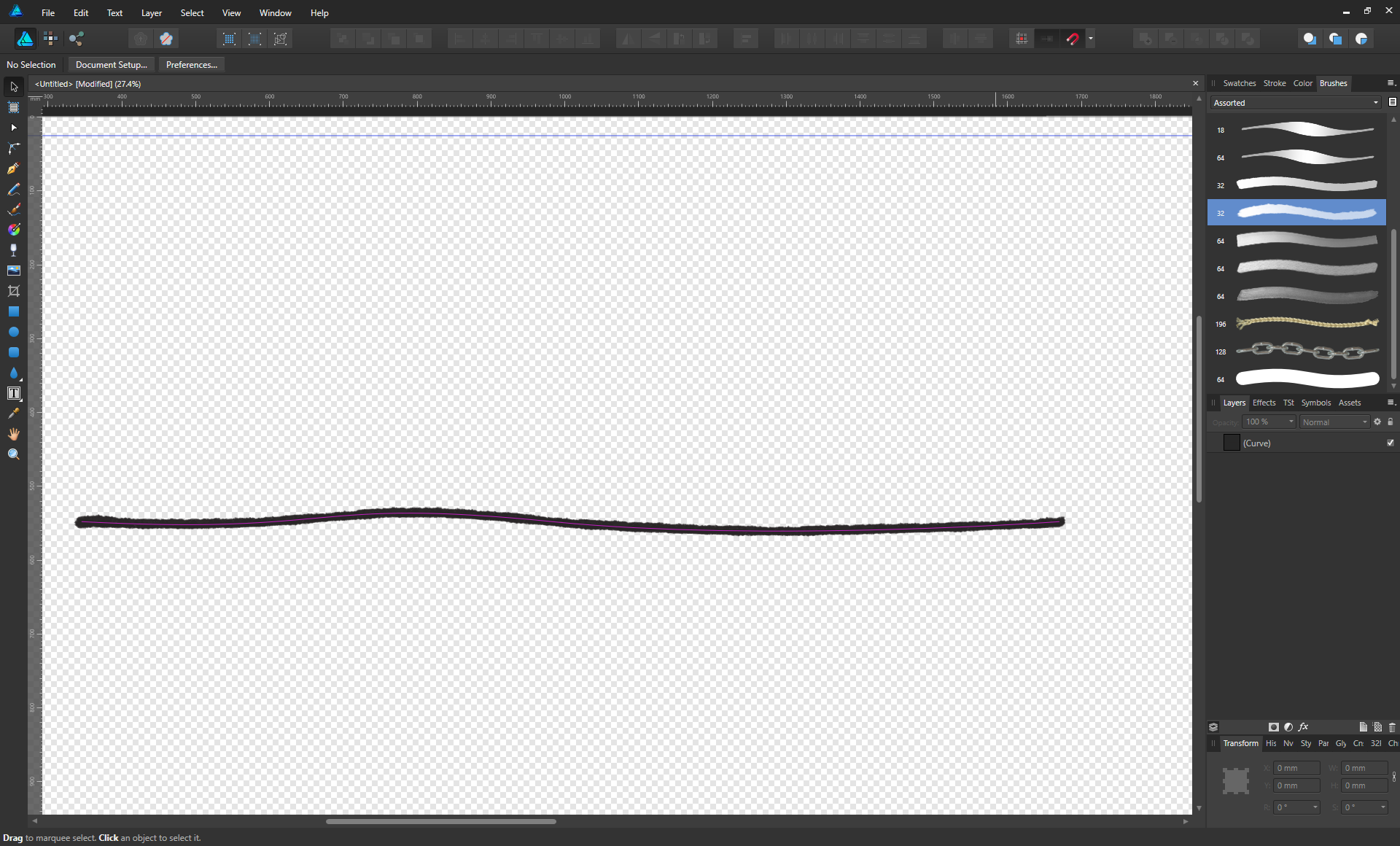 Moreover, if you have that lovely hand-drawn stroke image already scanned at a decent resolution, you can literally use that as the basis for a brush... which with about 3 minutes into it, looks then like this (those are a square and a circle via shape tool BTW): 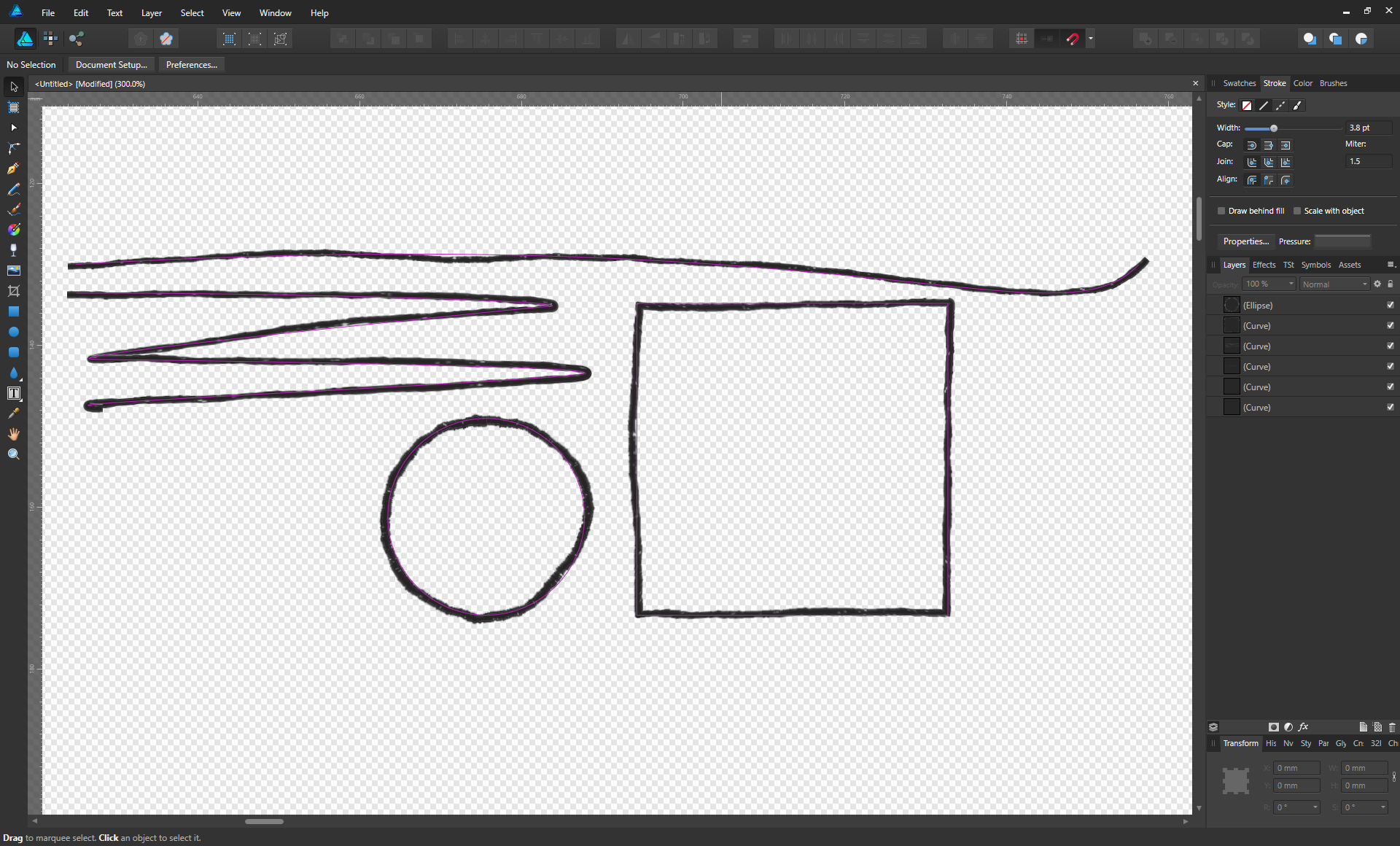 and this will print looking sharp as well as allow exactly the look you prefer with minimal effort.

If you were to add enough vector nubbly details to get your desired roughness, this would make for noticeably larger vector art files overall, and might involve some lag in the drawing effort.

That said, I've been drawing, sketching and illustrating a lot these days on my iPad Pro using Concepts App, Procreate, and both Affinity Designer and Affinity Photo; they're all really effective, each in their own way. Concepts app has a sheer vector engine, is infinitely scalable, and the vector brush system is pretty darn amazing... and it's a lot like what you're asking for. But so far, sadly not available on Mac OS; yes iOS, yes Android, yes Win 10 (Surface) but not Mac OS - no Surface equivalent hereabouts for us at this juncture, BUT... we designers of course could all happily use it with our Wacoms, couldn't we?

A simple solution - no fine structure nor width variations, only some zigzag, can be achieved with an effect. It's applied after the curve has been drawn. This is from Illustrator:

But Affinity Designer hasn't it.

If you use complex realistically texturized lines as vectors, it slows down common drawing programs. In practice you cannot have the effect as you draw, you must add it afterwards. That's obviously not a good thing because you would draw differently if the stroke is the final one - no matter is it done by free hand or more technical curves.

For ex. Inkscape allows you to draw in the fly so that the stroke pattern is taken from the clipboard. As well, after you have drawn a shape, you can place pattern along path. That can be a path effect, or a more flexible extension. Inkscape in addition has numerous filters which can reformat strokes. Here's an example of path effect: 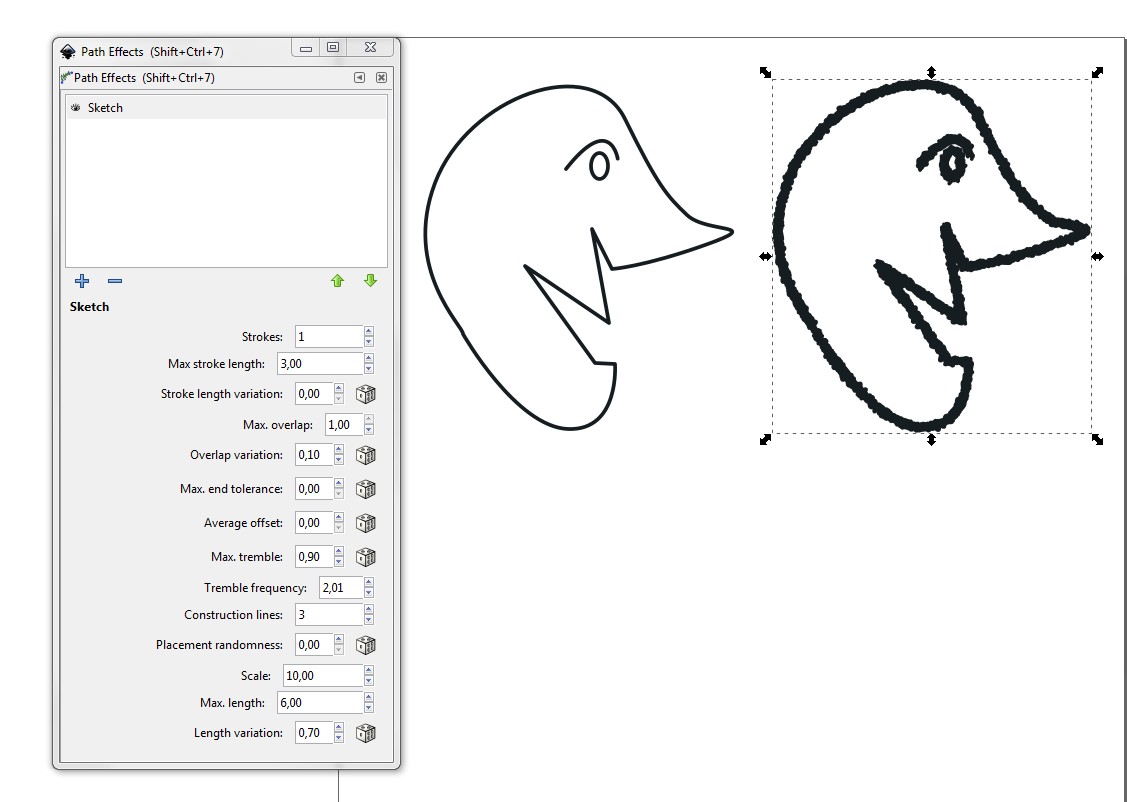 As said, very soon as you insert more curves Inkscape becomes slow preventing effectively rapid drawing if you use something finer than simple strokes. It's still possible that the performance is acceptable, if your pattern is simple enough. One centimeter of the stroke surely is non-realistic, but as a whole, it can be acceptable An example:

Here's an artificial bitmap stroke and the same as traced to BW in Inkscape. When the traced version was copied to clipboard and new curves were drawn with "take the stroke pattern from clipboard" the new stroke appeared well under half second after completing the stroke. So, it is a simple stroke until you release the mouse.

You must also do diverse trickery to prevent the pattern to be squeezed too much for short strokes, Generally you must have shorter versions and apply them afterwards for short strokes. Long strokes can be handled with splitting the curve here and there to avoid stretching the pattern too much. Here's an example of long curve. The pattern is from clipboard and the curve is splitted to four parts at nodes: 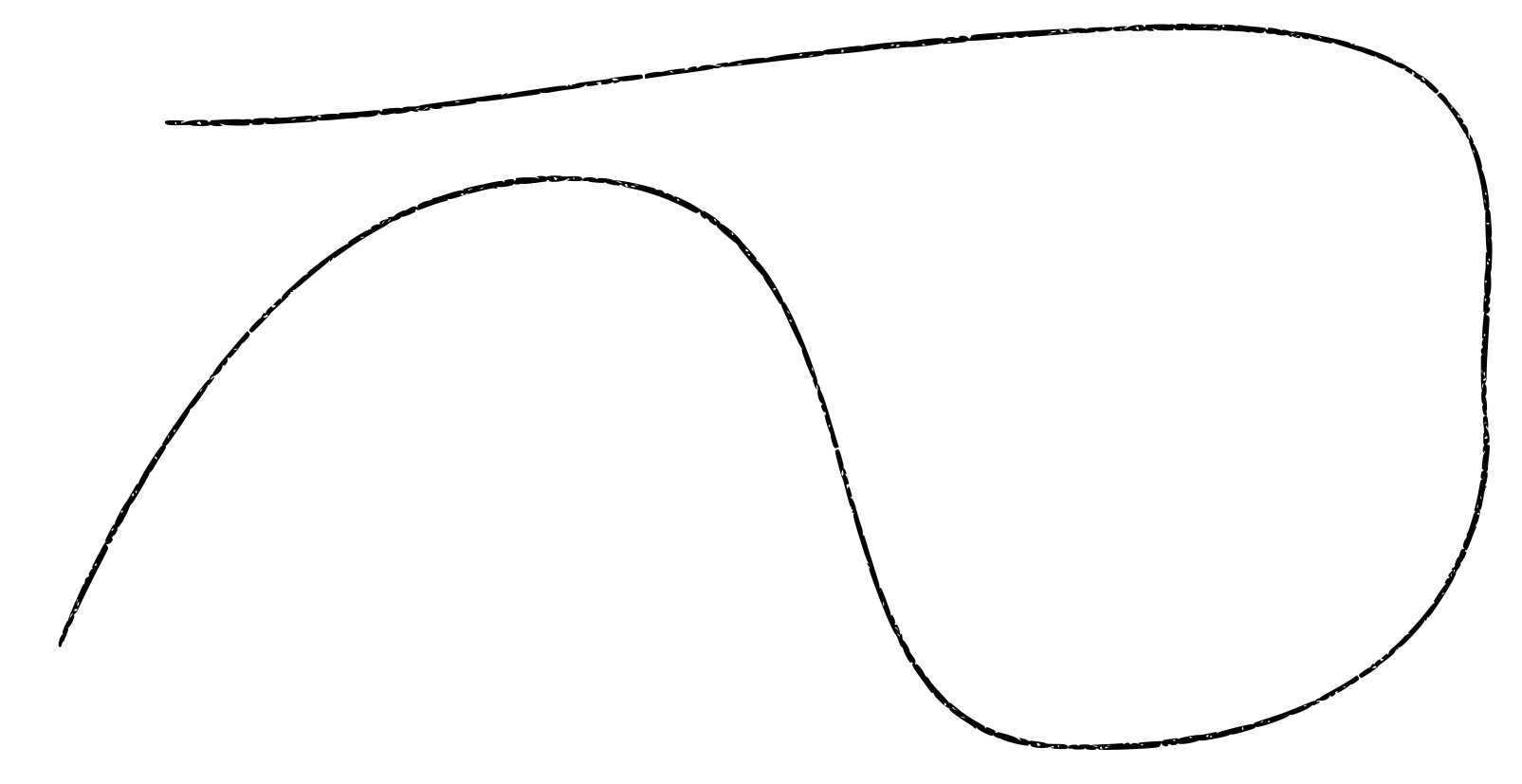 But the non-stable curve directions become easily without asking. Draw non-smoothed paths with a mouse.

Unfortunately I do not know how a draughtsman with ultra stable hands can especially program a high quality drawing tablet to insert direction variance (never needed additional instability) That variance should be in the software brush.

Affinity Designer's image brushes which really are repeated PNG images, are a crossing where the fence is lowest. The drawing performance can be tolerable, especially when you use low res images. The paths still stay editable. You also can change the brush afterwards globally or for selected paths. I don't see Affinity Designer's solution by any means an overkill. My opinion: it works very well. Illustrator also has the same in CC versions.

In bitmap graphics programs (GIMP, Photoshop, Affinity Photo) you can draw paths and stroke them with brushes to keep things still editable. Or you can draw directly as bitmaps without path editability. Paths in bitmap programs are auxiliary tools and their editing & combining possiblities are more rigid than in vector programs. I cannot recommend them ecxept if you draw directly the final curves as bitmaps and do not need heavy edits. Even better performance in that case is probably got by using 100 years older tools.

Theres still one way to make variance: Bitmap images can be distorted with numerous filters. They can have small feature noise as well as waveness in a larger scale and all randomized. Unfortunately they are not "in the fly", but post processings. Photoshop's smart filters can offer a possiblity to see the result also when wanted during the drawing work.

here's an example of 2 different filterings in Photoshop. They are random attempts, not especially tried to simulate something special. 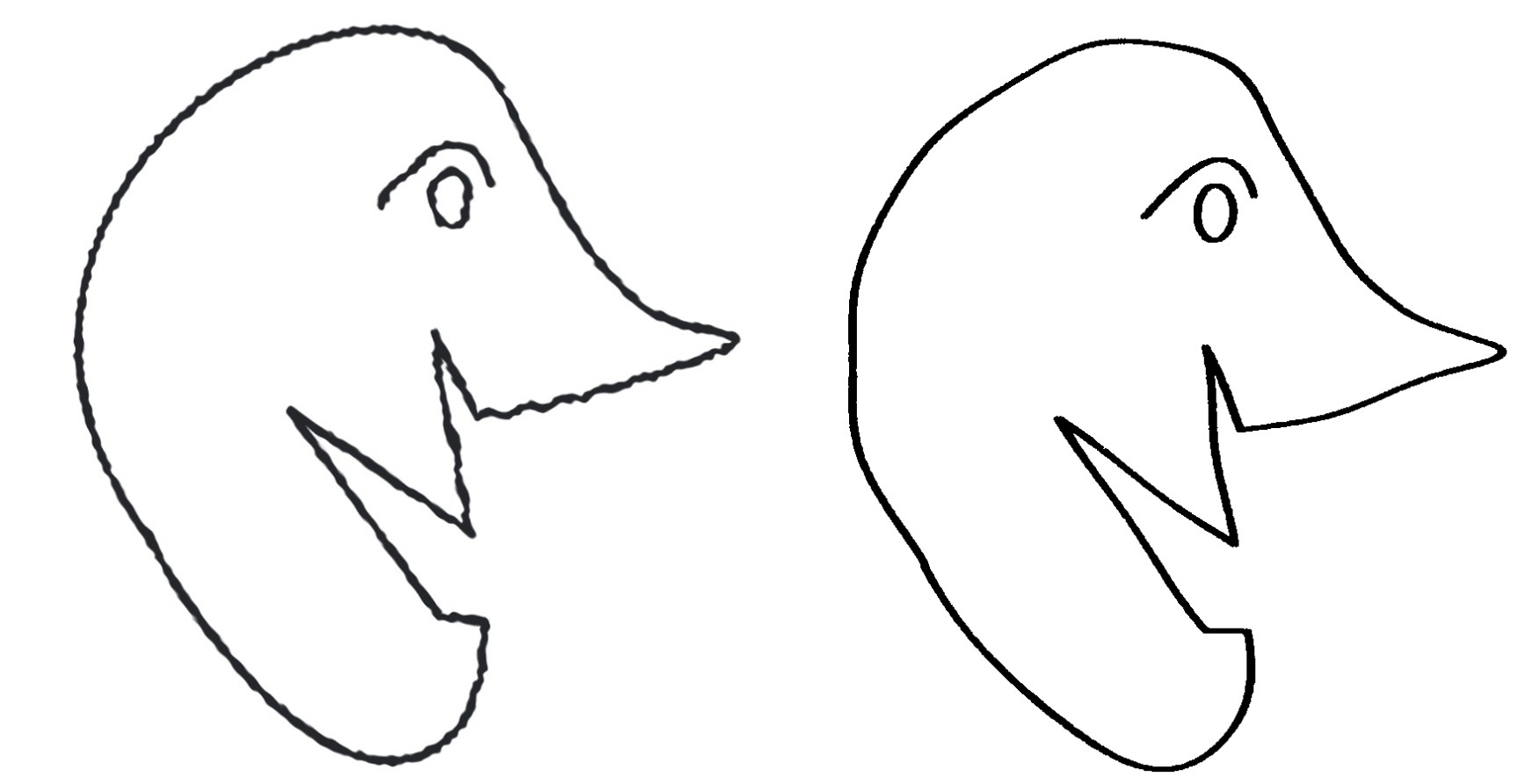 In the left a ripple effect is applied, In the right theres more effort. The shape has got waves filtering to create bends, there's a slight amount of blurred noise added to the image, then tresholded to make the stroke grainy. Finally a little horizontally shifted copy is added to make the line widths in large scale non-uniform.

Remember: You can keep your vector images and goto Photoshop or other bitmap program for stroke effects. Finally everything is shown as bitmap, there are no vector screens nor newspapers.

I would recommend Procreate for Mac. Any of the “brushes / pens / pencils” available can be adjusted for how powerfully “streamlined” they are. Here is a screenshot of the adjustment for Streamline: 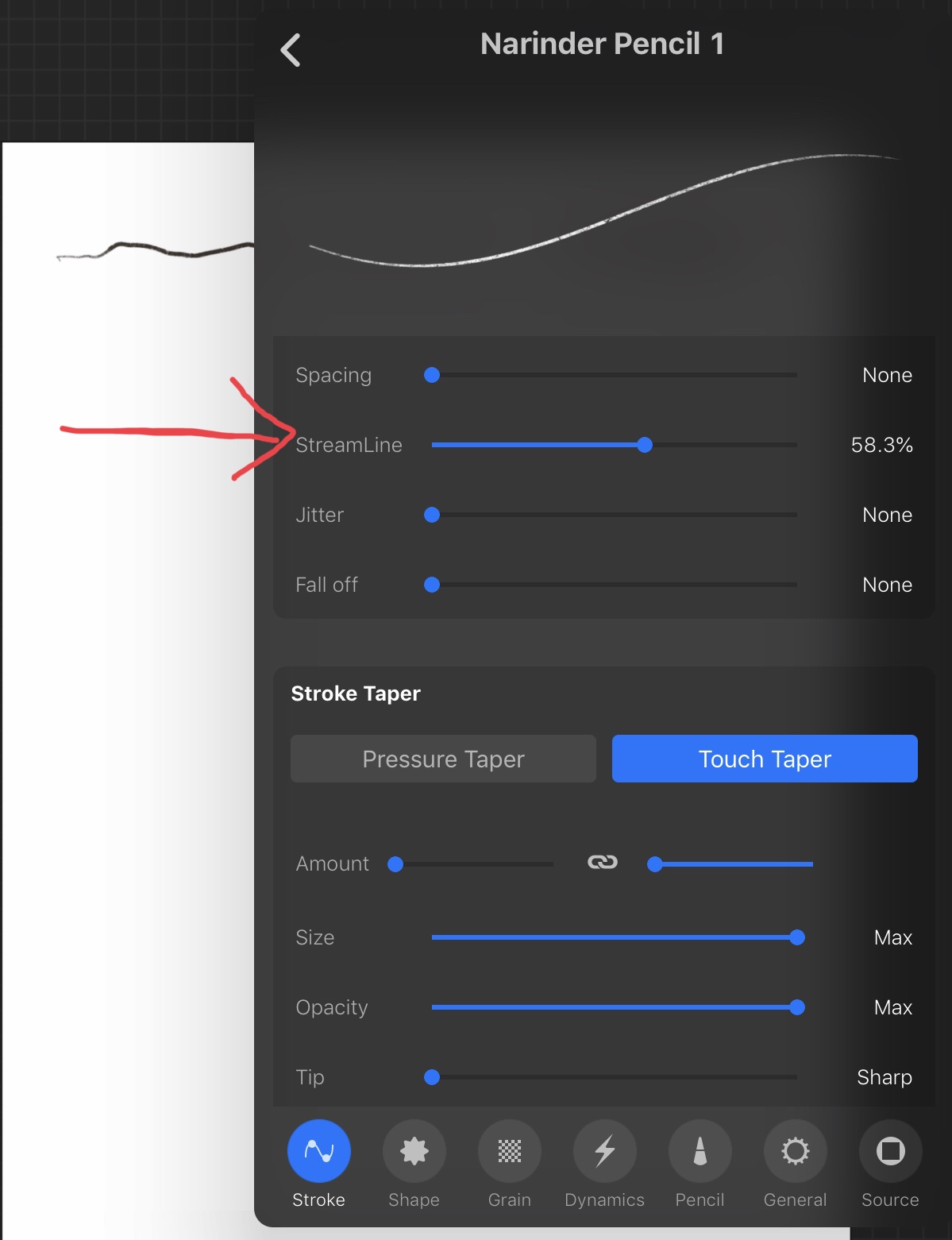 In this example I show a range of the “streamline” adjustment available (from 0% to 50% to 100%) in two of brushes, the Narinder Pencil, and the Technical Pen. As you can see, at “0% Streamline”, the line can be drawn quite shakily if desired: 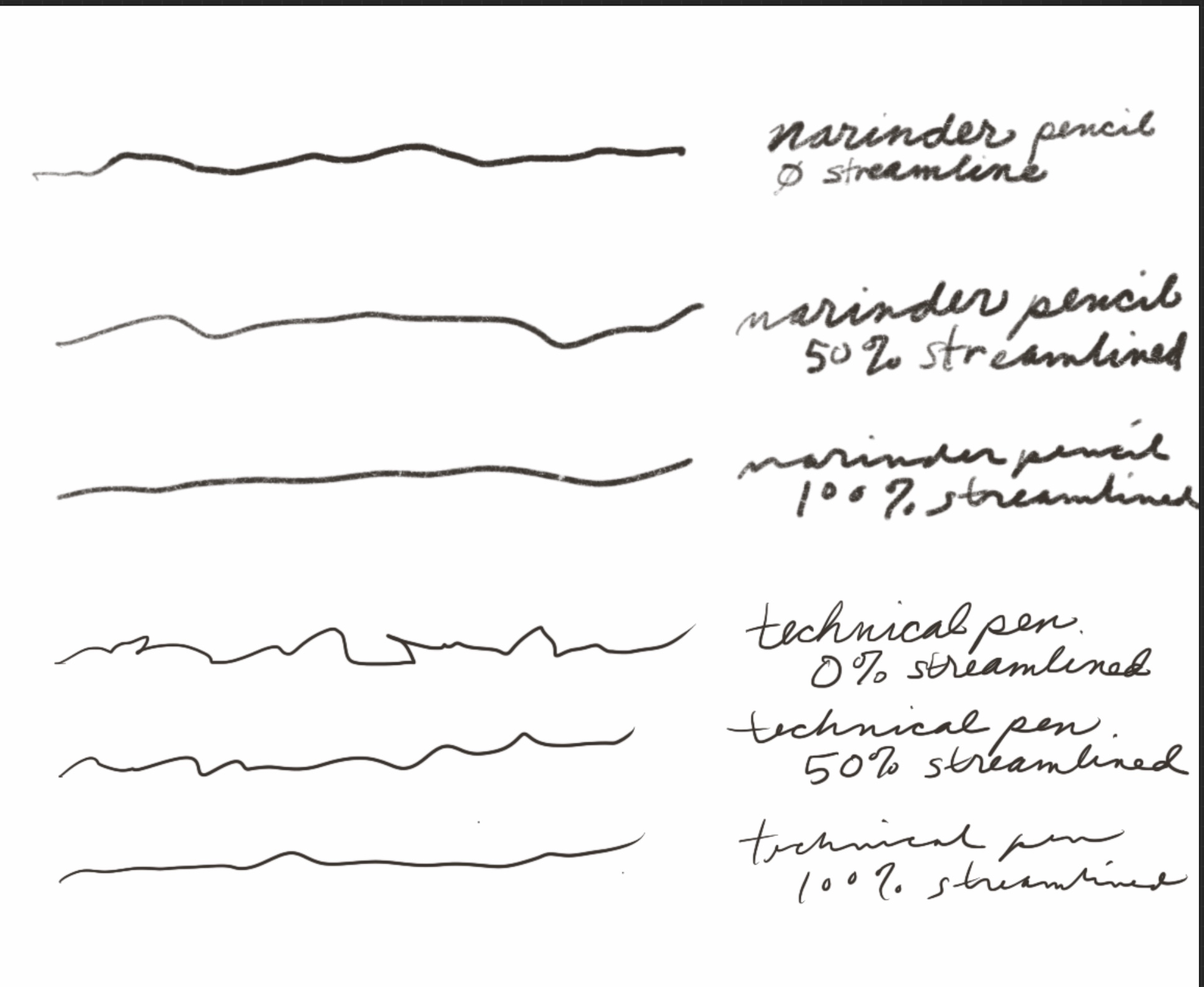 So with Procreate, you can make a line as “clear and shaky” as your heart’s longing desires.

8
Stroke a path from thick to thin
2
Diagonal lines for brush stroke or dashed stroke
0
Stroke won't change in Illustrator
0
How to expand stroke from image in affinity designer
2
Using the pen tool for drawing a geometric pattern
3
How to keep stroke size unchanged when changing brush in Affinity Designer?
0
Illustrator stroke preview for pencil while drawing like paintbrush
1
style name of a real cartoon image
9
Adding transparency to ink drawing