Why 0 lightness in LAB is not guaranteed to be black?

Since the L in LAB represents Lightness, why having 0 lightness is not guaranteed to be black? 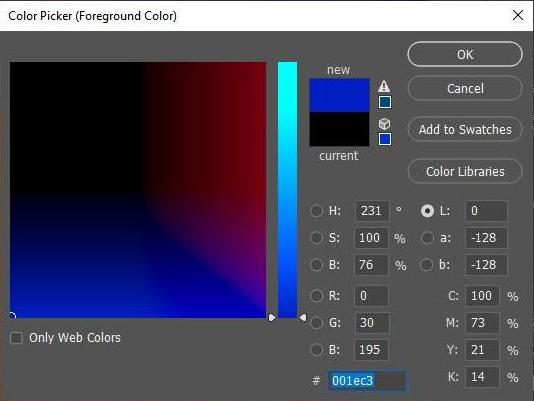 This is more of a long comment than proper answer. Something towards an answer though.

The color of your choice is outside of human visible spectrum, which is a slightly arbitrary thing. What color is it? Well, nothing really it does not exist. wikipedia has a good animation of the shape of possible colors here.

Now since the color has to be turned into RGB, it probably undergoes the same color transformation as anything else in Photoshop. Now color profiles are supposed to try to find suitable alternatives even in cases that are impossible, a bit depending on the conversion intent, what you see is the closest color to that can be displayed.

About 100% of the generally known facts about the subject has already been said in other answers and comments. I can only turn the viewpoint.

"XYZ" color model has already undergone scaling from nerve signal voltages to practical number scale, but it's still impractical to use. That's because generally people more likely recognize such qualities as lightness and color. The attempt to separate lightness and color is a psychological phenomena. It obviously has been developed because it makes possible to easily present seen color sensations in symbolic communication (=language). You can for ex. say "it had the same color as this, but it was as dark as that"

There are many attempts to create numeric systems for lightness and color. Lab is quite succesful one. Numerous people are taken to tests what they see and finally the scientists have developed a transformation formula from XYZ to numbers L, a and b, where L is the lightness and numbers a and b present the color.

If you write arbitary numbers to L, a and b and manually calculate the corresponding color sensation numbers XYZ, you can well get a XYZ combination which is nonexistent in the nature, no light radiation could produce it. You would need negative light which gives negative exitations to eye nerves. No such phenomena has been found in physics. It's also possible that you wrote something which presents an existing color, but is out of the range which sRGB monitors can produce.

If you put those totally or at least in sRGB meaningless Lab numbers to the exact formula which converts numbers to sRGB, you will get something outside the range 0...255. Here's a calculation example:

The spreadsheet is taken from https://www.kennethmoreland.com/color-maps/DivergingColorMapWorkshop.xls

If you write something arbitary to L, a and b in Photoshop's color selection dialog, the resulted RGB numbers are truncated to 0...255 and you can get something obscure to your screen, for ex. L=0 gives a visible color as you have found. Note: There's also color management which complicates the mess.

Fortunately you can switch Proof colors and Gamut warning = ON. Select proof color=computer screen, then non-displayable Lab combination is shown as greyed.

Why image processing software allows Lab numbers which present either no color at all or something beyond the capacity of displays?

Answer: That's for convenience. Many pieces of software operate internally in Lab mode. You may have 2 adjustment layers. If one of these makes some impossible colors, but the next fixes them to displayable rage, you can watch it right and be happy. We use the same principle in ordinary thinking, too. Negative numbers are a good example.

BTW. One can wonder if Lab numbers can present nonexistent colors and theres's as many different combinations as in RGB, would Lab possibly be somehow sparse ie. were there big holes between the visible colors? Answer: It is sparse in visible range, if you really use 8 bit numbers. But that's compensated by having internally at least 16 bit Lab numbers and you can do it, too.

8
If these colors all have the same lightness, then why does my brain tell me some are lighter than others?
17
Why not use pure black (#000) and pure white (#FFF)?
11
What are the pros and cons of using Lab color?
2
Are there any colors besides black that will work with the tetris palette?
2
Why is azure used instead of teal as cyan in color mixing?
0
How to quantify the distance between two colors?
2
Palette of at least 10 hues with 4 lightness levels (by perceived appearance)