How to create perspective with curved lines?

I have a simple task:

I want to create a train track that's slightly curved and disappears in the distance. The best I've achieved so far is the following image which I created with Affinity Photo: 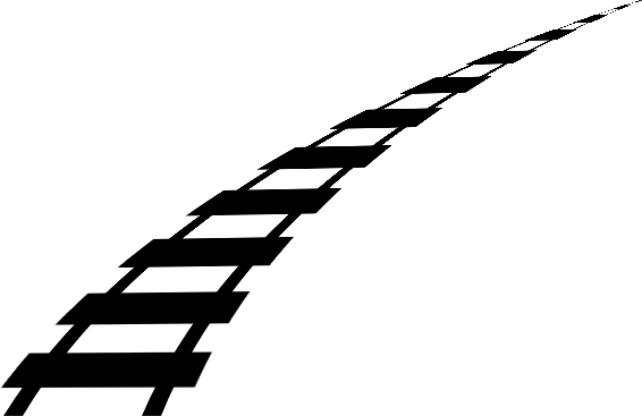 It transports the idea but when you have a closer look, it's clear that the perspective is wrong: The planks should get much thinner in the distance, but they appear to be somewhat distorted instead.

How can I do this right?

I guess I'll have to start with something like the follwing as a first step. What's step number 2?

(I currently don't have an Adobe subscription, so I'd welcome a solution with Affinity or Inkscape or some other software. But I'm also curious how an Adobe solution would look like.)

I am not an Affinity Photo user. However, I should imagine like most image editors it has a distort transform tool.

What I would do is begin with a curved railway track in 2 dimensions, then distort it for perspective, and rotate as required.

This example was first made in Inkscape. Where I made a pattern for one railway segment then repeated it as a Pattern Along a Path. If doing this in Illustrator, a custom brush could be created and used similarly. 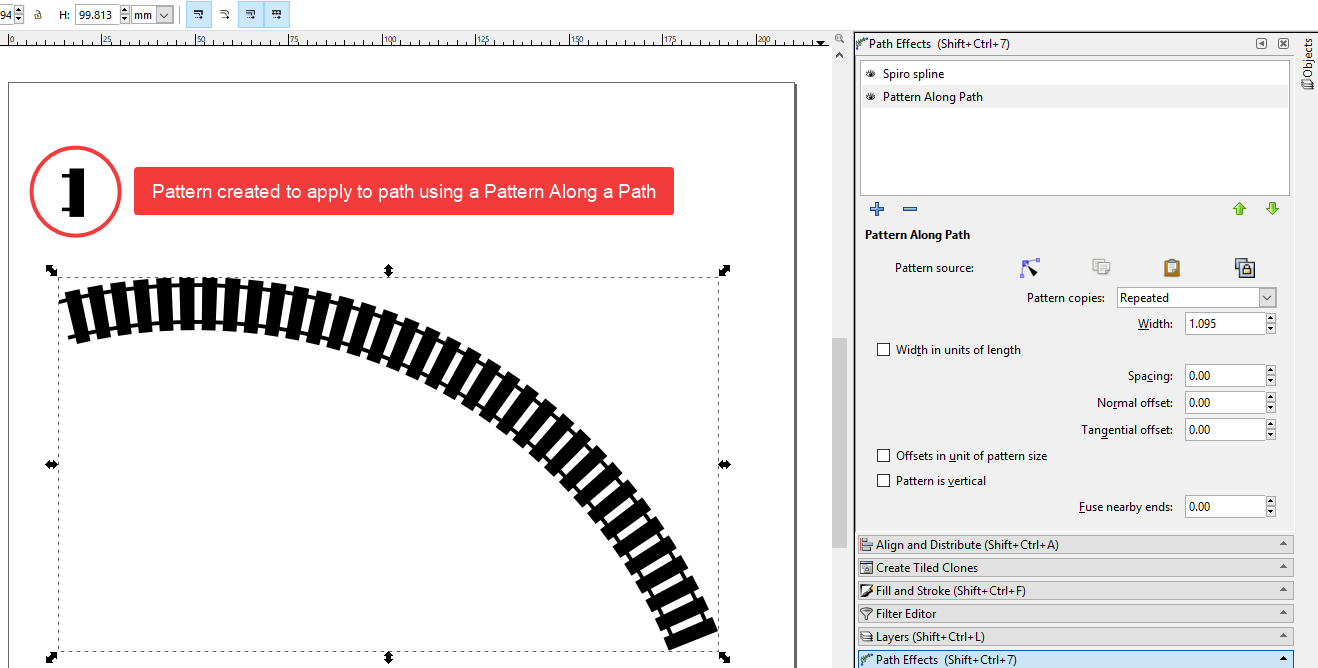 Then I converted the object to paths, and copied and pasted into GIMP where it was distorted and rotated, but the same would be possible in Illustrator/Photoshop or virtually any decent raster/vector image editors with distortion tools.

The point here is not the software used, but the curved 2D railway track you start with and the final transform and rotation.

Just as a side note, it's also possible to do a similar transform directly in Inkscape using Extensions > Modify Path > Perspective in conjunction with a quadrilateral to define the transform.

To create the quadrilateral for this extension, you must start at the bottom left with the pen tool, and create it in a clockwise direction.

In Affinity Photo have a straight piece of the railway as you already drew.

Make it curved with Mesh warp. Remember to apply the effect to make it fixed 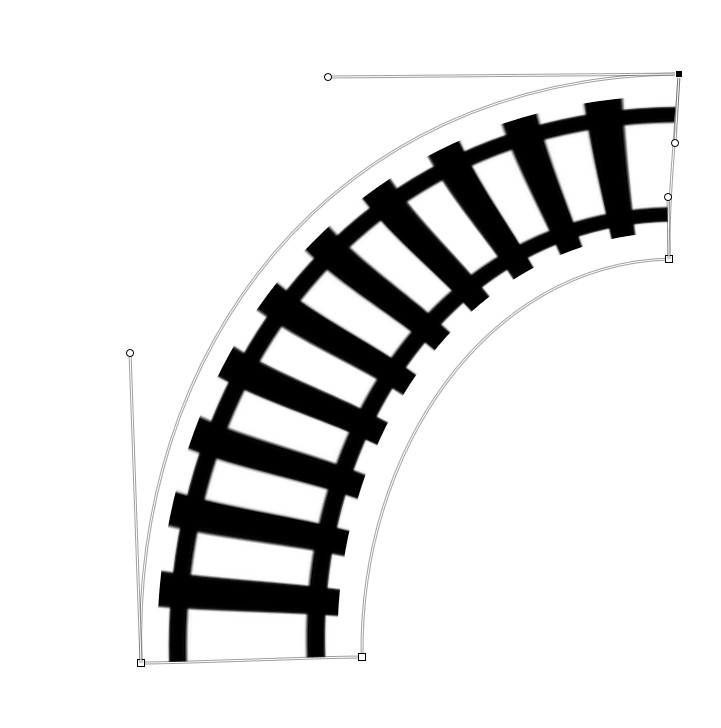 It's not geometrically perfect, it would be better to draw it originally to curved, but that's maybe easier in Affinity Designer. There you can have a piece of railway as image brush and you can draw easily as long piece and as curved as you want.

In A.Photo the next step is to add perspective with Perspective Warp: 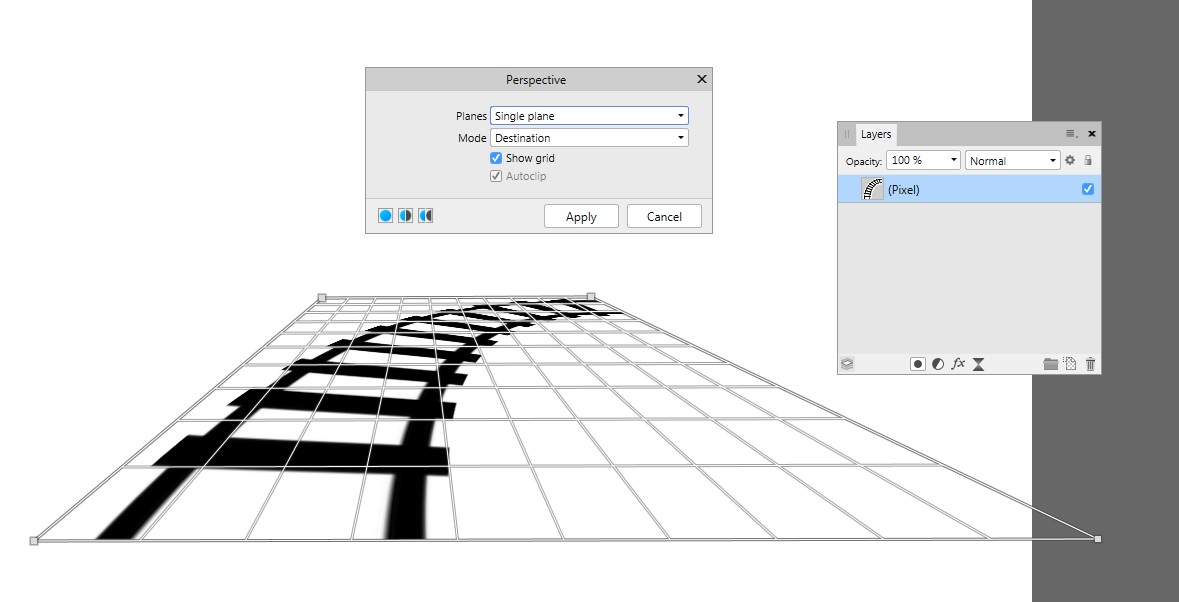 Again apply the effect to make it fixed.

Not asked: If you have perspective and at least the nearest end of the rails are in a big size, you maybe should draw them as 3D. That's complex. Here's an elementary draft from a freeware CAD with non-realistic dimensions, rail cross sections and materials

Not the answer you're looking for? Browse other questions tagged inkscape perspective distort affinity-designer or ask your own question.

1
How to wrap text on a curved path with perspective?
1
How to create multiple Lines/Paths in perspective?
2
Repeat lines and expand the space between them
2
Software to create perspective line with curves
2
Relation between picture plane and observer in perspective
2
How to warp an image for sloped rooftop graphic?
1
How to set up a perspective grid to draw a scene with multiple horizon lines
0
Linear perspective and receding lines
4
curved perspective
0
How to join two curved segments with straight lines in affinity designer?