What is the name of this perspective and how is it constructed?

I stumbled on this image in The Promised Neverland: 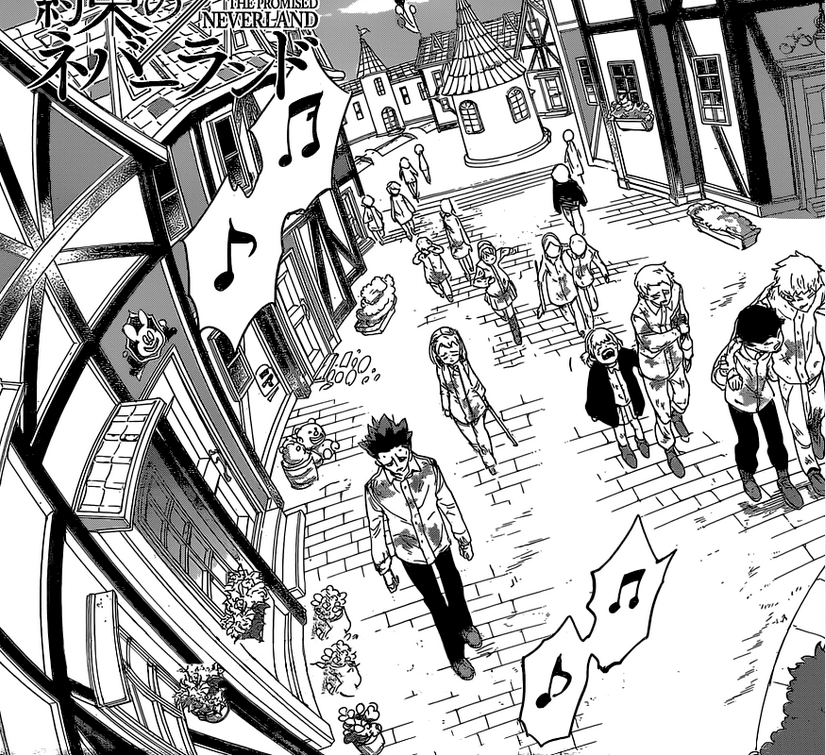 This kind of perspective is relatively common in the series and I'd like to know it's name, and how it can be constructed.

This is an example of a classic one vanishing point bird's eye perspective, but with a spherical warp in the left-hand side barycentric to the wailing child in the column of walking people.

This series of comics, manga and animé seems to frequently use very low eye station point (worm's eye view) or very high eye station point (bird's eye view) to add a sense of exaggerated perspective which is often called perspective force. There are also a number of examples of exaggerated "lens effect", where there is an approximation of the spherical distortions you get with a wide-angle or fish-eye lens when the subjects are closer to it than the lens was designed for - also another kind of of perspective force.

These are all used as a storytelling device to make the viewer/reader feel more injected into the action, and to feel like things are all a bit... off-kilter. It's an intentional push into the uncanny valley, for a specific desired effect.

As to how to construct the perspective grid for this image? Horizon line very high (1/6 paper height) (because bird's-eye) and tilted to the left almost 30º; vanishing point roughly 2/3 right versus centre of paper; once all main perspective grid lines drawn, if you want to add a spherical / lens distortion feel, redraw each perspective gridline as a long-chord arc passing through the same points, with all lines sharing a singular arc centrepoint. In the case of this image, the left-hand side horizontal / vanishing lines are heavily arced, and though they all do share a singular centrepoint ( the crying child) its not the same centrepoint as the few arced horizontal / vanishing lines on the right - the sphere distortion on the left is very strong (the arcs are tighter) to make for a more distorted, warped result.

After throwing a quick sketch together over this image, I'll add some details:

Curvilinear perspective [1], but many people would also call it fisheye perspective. A very good example of how to draw can be found on research gate, describing it here would make for a monster answer that would take a very long time to write*.

* Well I have been know to make such long monster answers before, but I don't have time right now.