How can I achieve an iridescent/metallic/holographic effect in raster editors?

I understand this effect can be achieved in 3D rendering programs, but I also believe that it can be achieved through a raster editor like Photoshop. I work in Affinity Photo on iPad, so I’ll need to be able to translate any workflow into there. I’ve tried liquifying brush strokes, and it gets close, but doesn’t quite accomplish what I’m going for. Other threads I’ve researched recommend normal/gradient maps, but that seems like a lot of work for still not quite what I’m trying to do. Whatever it is I need to do seems to be reliant upon color palette and texture. Have been searching forever for an answer!

Two more instances of this effect: 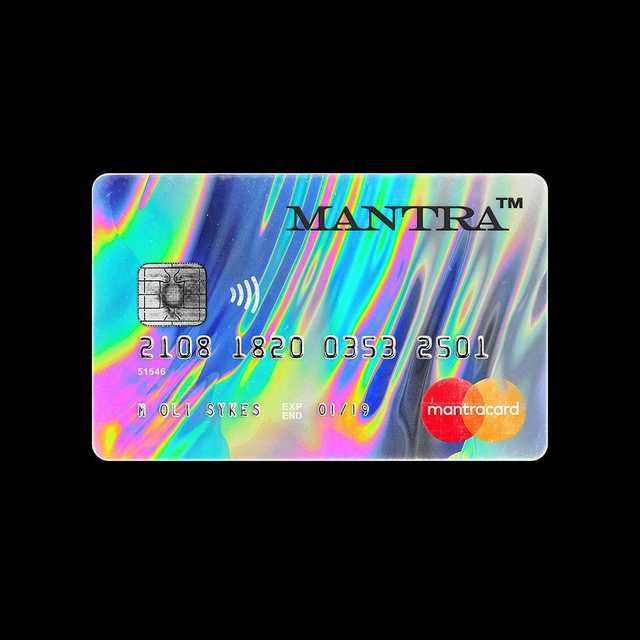 I was able to come pretty close pretty quickly in Affinity Photo - I could only take a couple minutes for this as I'm on a production rush right now I'm afraid.

I made a simple gradient fill, took that into the liquify persona and did some serious liquifying... 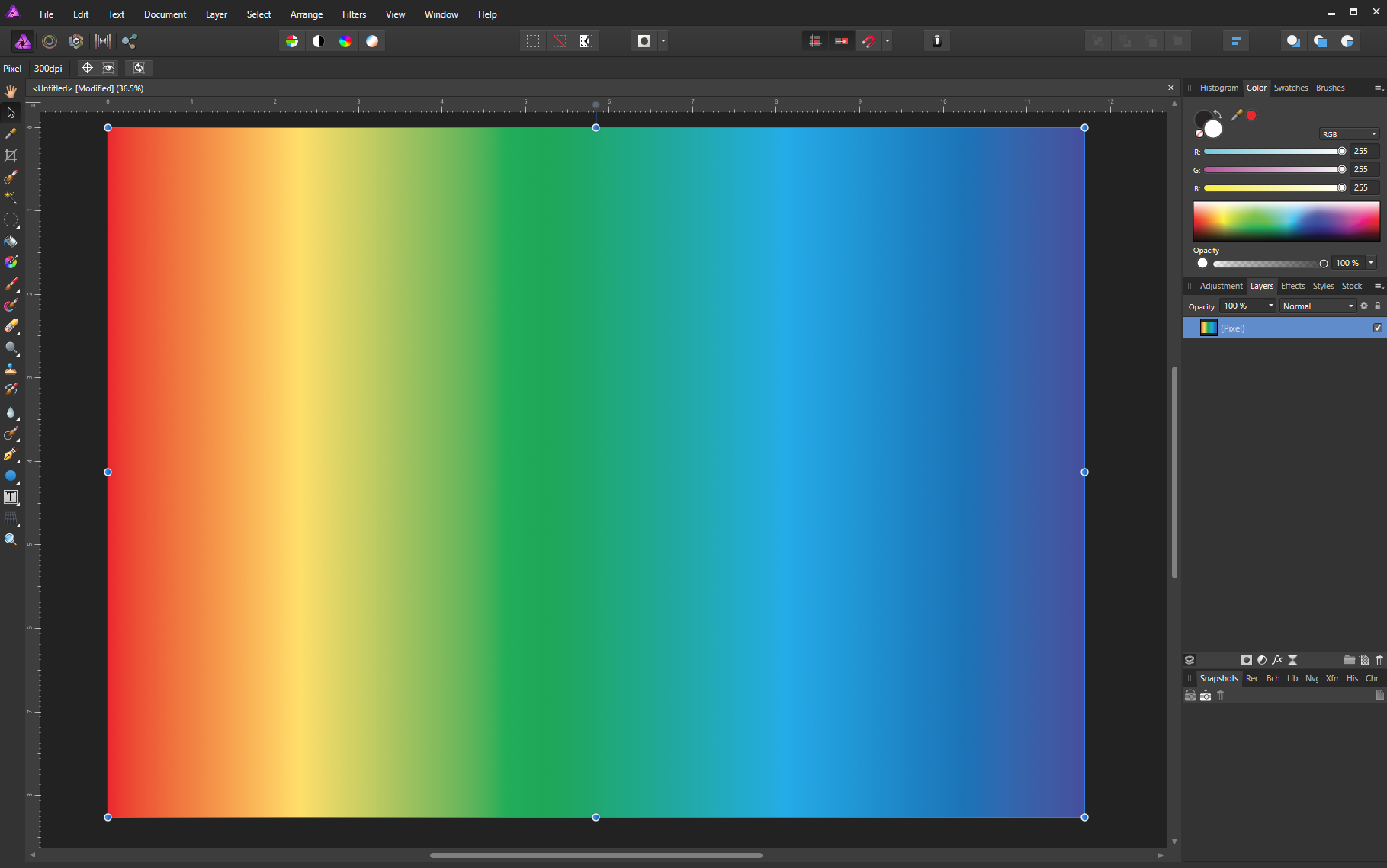 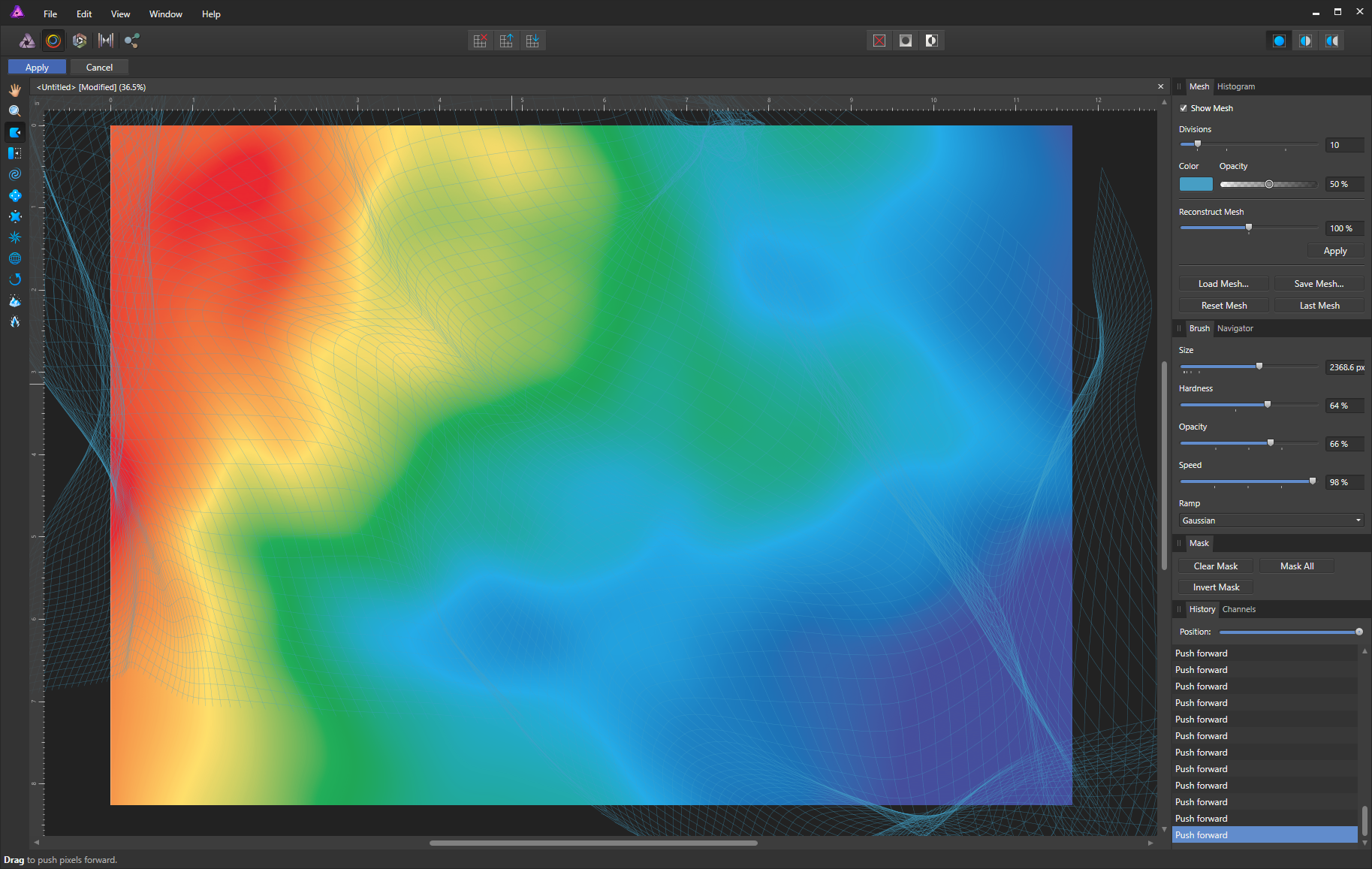 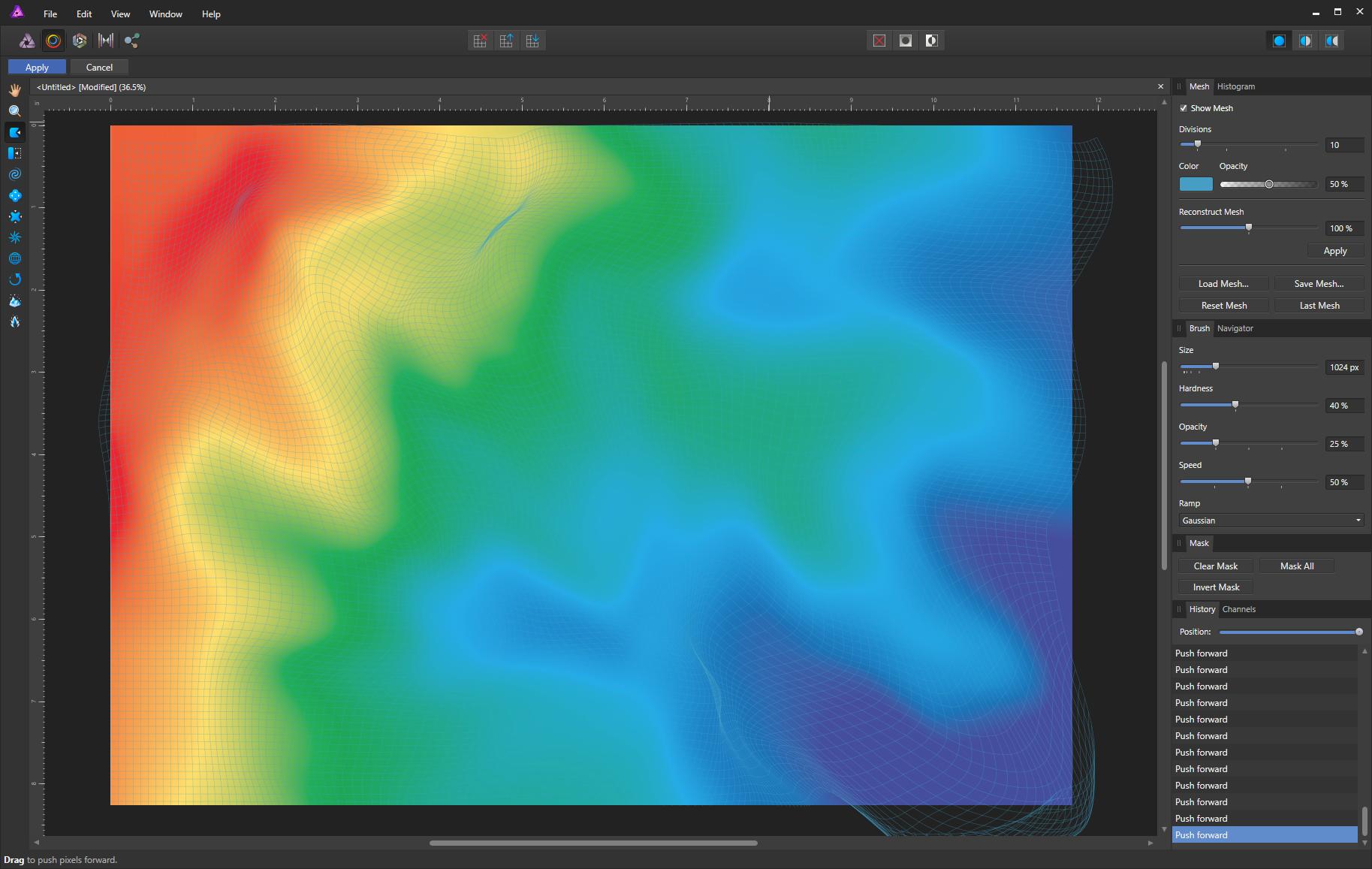 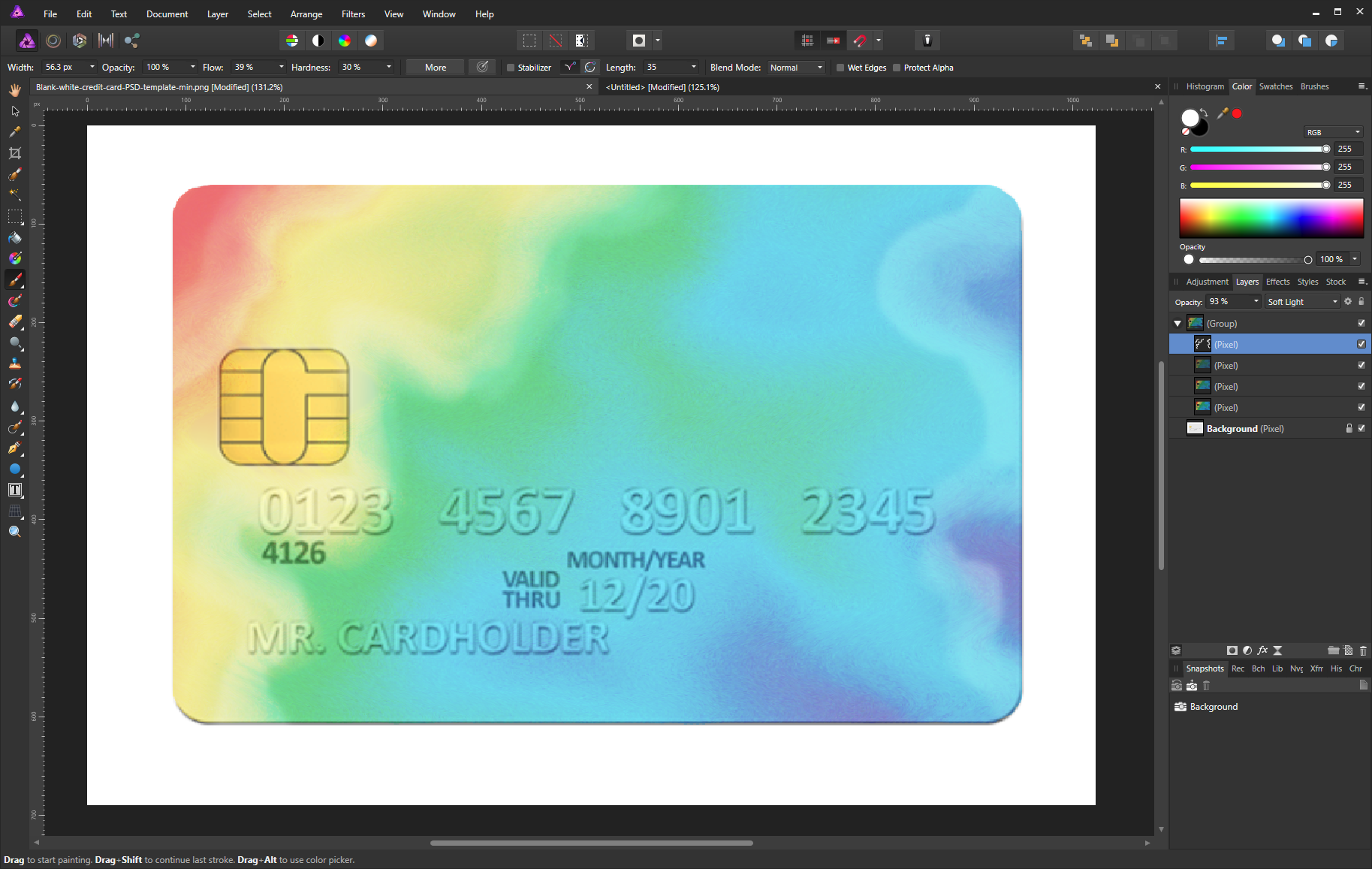 Again, I've just not the time right now to put into trying to exactly match your reference image, but I think this should demonstrate a workflow in Affinity Photo, both on desktop and Affinity Photo for iPad which will work for your use case.

You can simply paint the shapes. Fill the image at first with light grey. That presents aluminium. Here is used grey = 90% of full white. 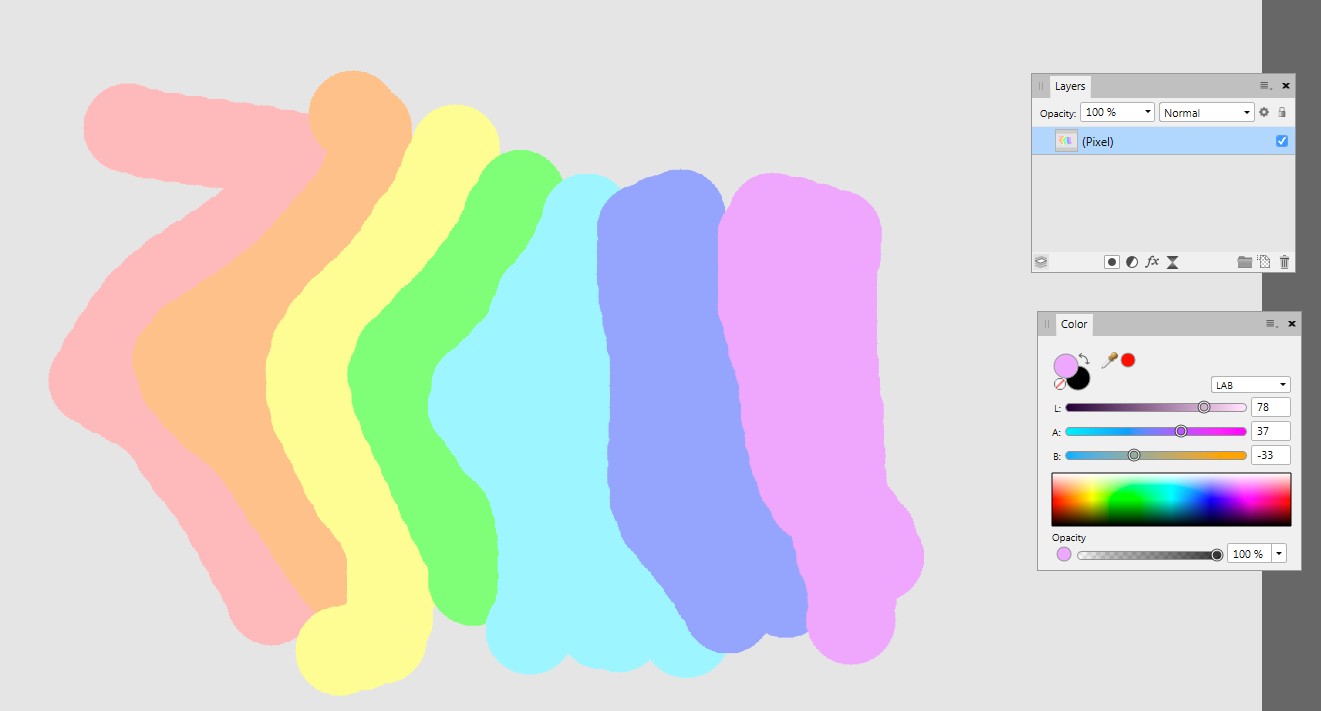 Here the lightnesses are about 80% of max ie. a little darker than the starting grey.

I found that making a good series from scratch isn't easy. Using the color selector in Lab mode helps a little. All colors can have the same luminance level (=L). I used the color picker and tried to pick the mentioned colors so that the color content numbers a and b were averagely as near the mid zero for every pick.

Then blur the image to get gradients Here 100 px Gaussian blur is applied. That's nearly the same as the width of the painted color stripes. 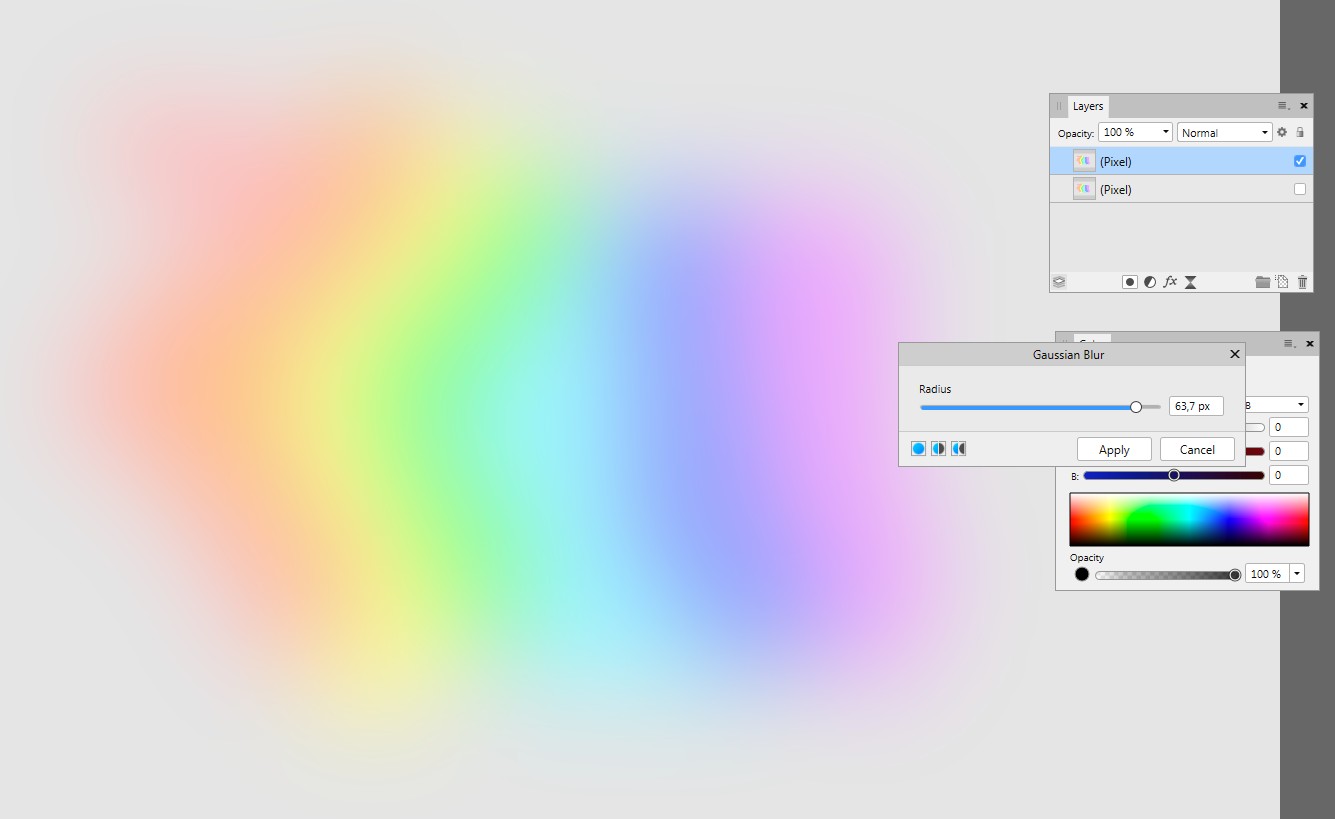 I must admit that originally I tried to use gradient map to make the color gradients. The result was not good. Or actually I thought it was good enough until I recently saw a real and big enough piece of iridescent looking aluminium foil. => Scrapped my existing answer and write a new, this one.

There's another answer (by user G.Falla) where a simple gradient is liquified heavily. I skip it. I drew the color stripes with some mild zigzags instead.

There's no reason for bigger complexity because I have no facts which actual physical structure things should be reflected. Generally there should be a certificate which should live in certain way when the viewing angle is changed. I'll return for it later.

Now it's ready to be used for something. If there's some content, the iridescence has bigger tolerance. I clipped a piece and placed it on a fake credit card: 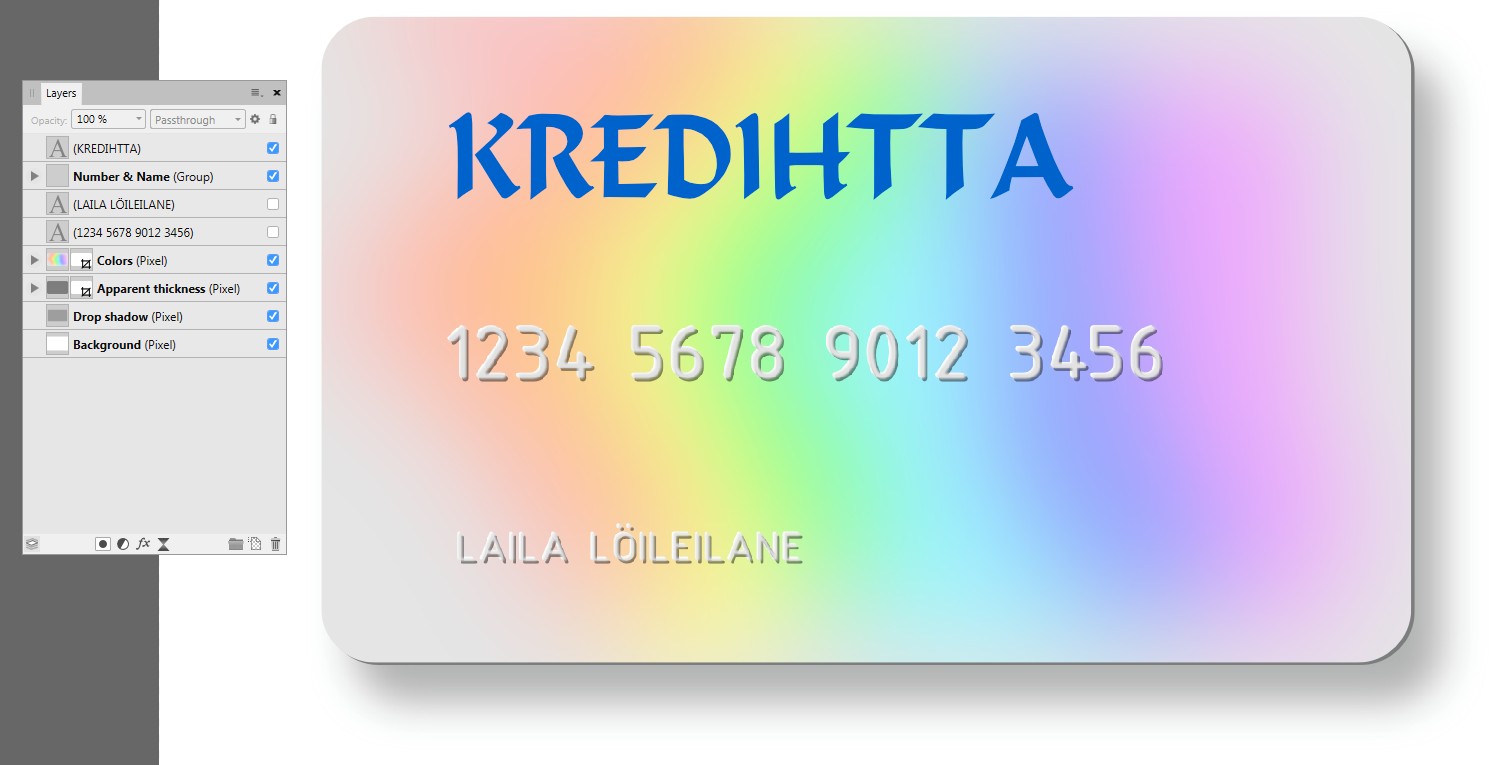 As said, the iridescent layer very likely isn't decorative, it has some difficult to reproduce holographic details, which can be seen only in certain angles and which live when one rotates the card. Those are impossible to be shown in a static image. If one can make a plausible logo for that purpose, it's better than nothing. I wouldn't try to copy anything real, but I wrote word GENUINE as a dummy certificate: 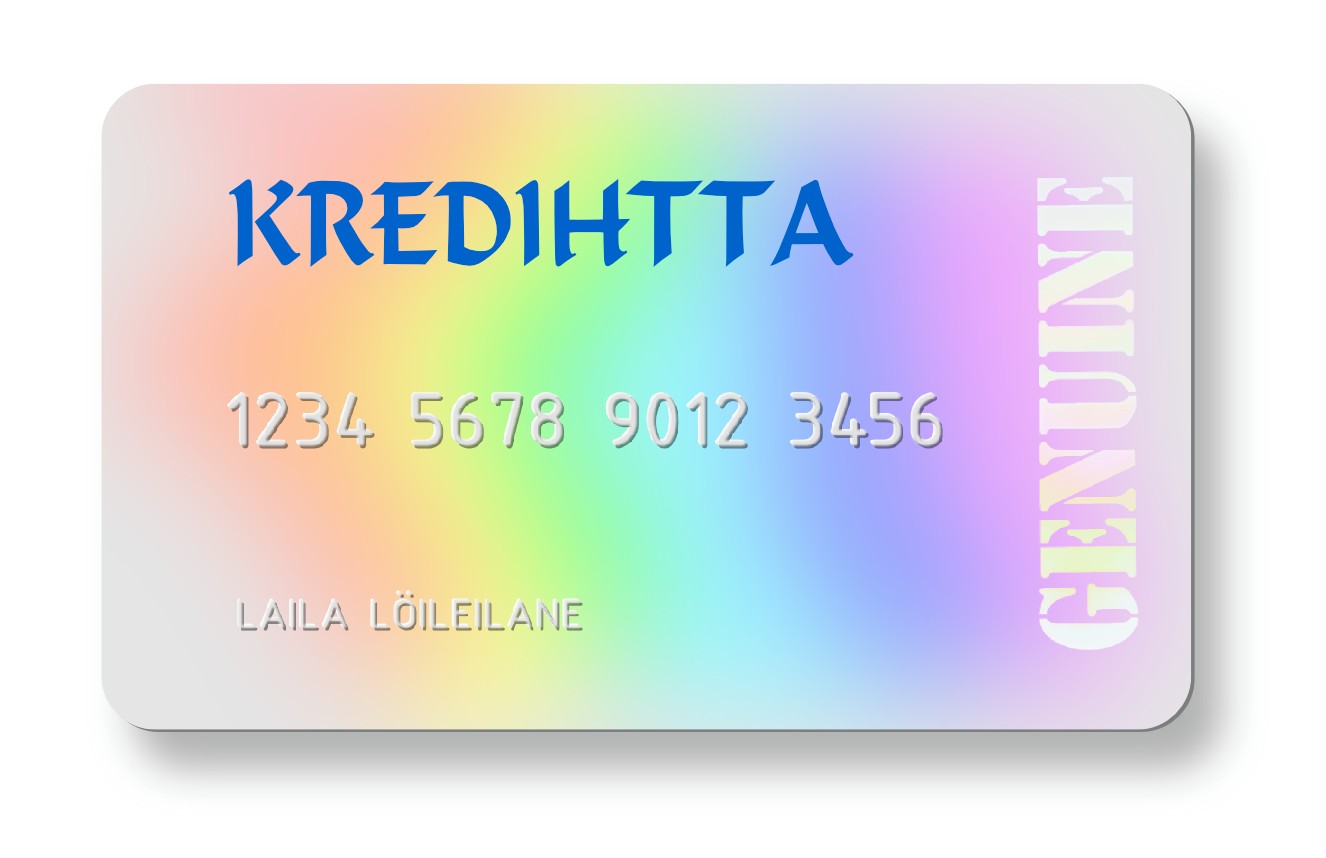 It's a new layer with different gradient fill. It has blending mode hard light to reflect possible underlying details altough in this case it's useless. The layer is substantially brighter than the underlying blurred layer. 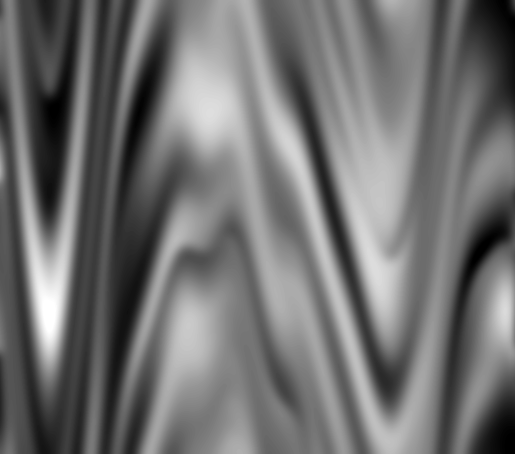 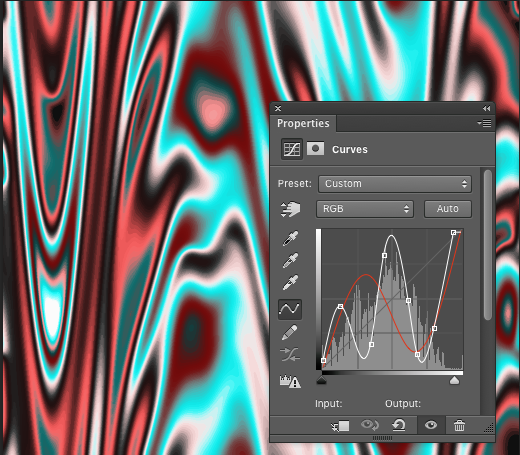 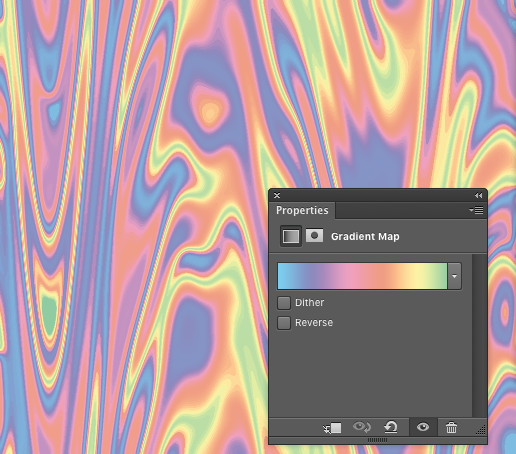 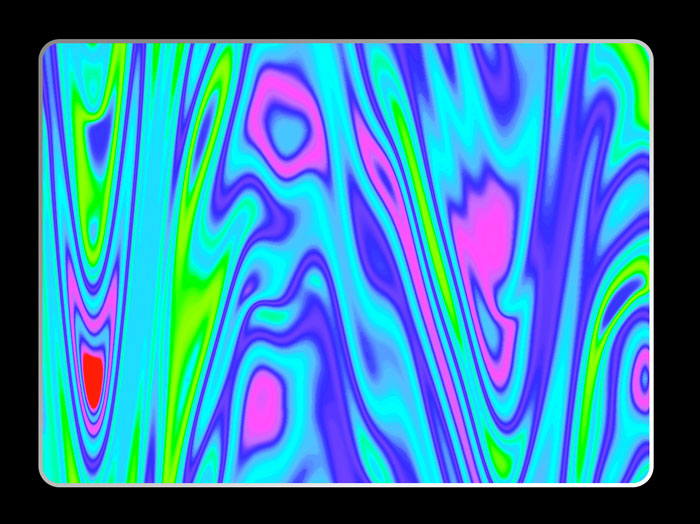 Not the answer you're looking for? Browse other questions tagged color photoshop-effects gradient texture metallic or ask your own question.

0
How to put a high metallic shining gradient border like this?
0
How to achieve this effect in Illustrator/Photoshop?
0
How to manuallly create glossy/metallic lightning effect on object?
1
How can I recreate this holographic iridescent water effect in Photoshop?
1
How to create a noise-gradient texture in Affinity Designer?
2
Gradient depth effect - How can we achieve this gradient?
3
Metallic effect on picture