How to recreate The Muppet Show logo in Illustrator?

Well, I'm not sure if you can call this a logo: 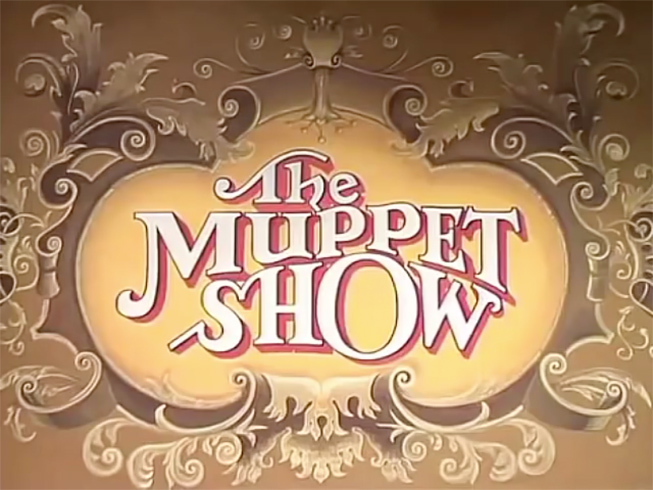 But yeah, I'm referring to the lettering that appears in the show's opening.

I understand that it's probably a hand-painted sign, but is it possible to recreate that with a normal font in Adobe Illustrator?

Thank you all very much for the wonderful answers! I actually intend to first learn the skills needed to recreate the Muppet logo, then make one of my own in a similar style. My friend is making a Biology show, so I thought it would be funny to help her create a logo in the muppet style.

I pretty much figured out the extrusion part, 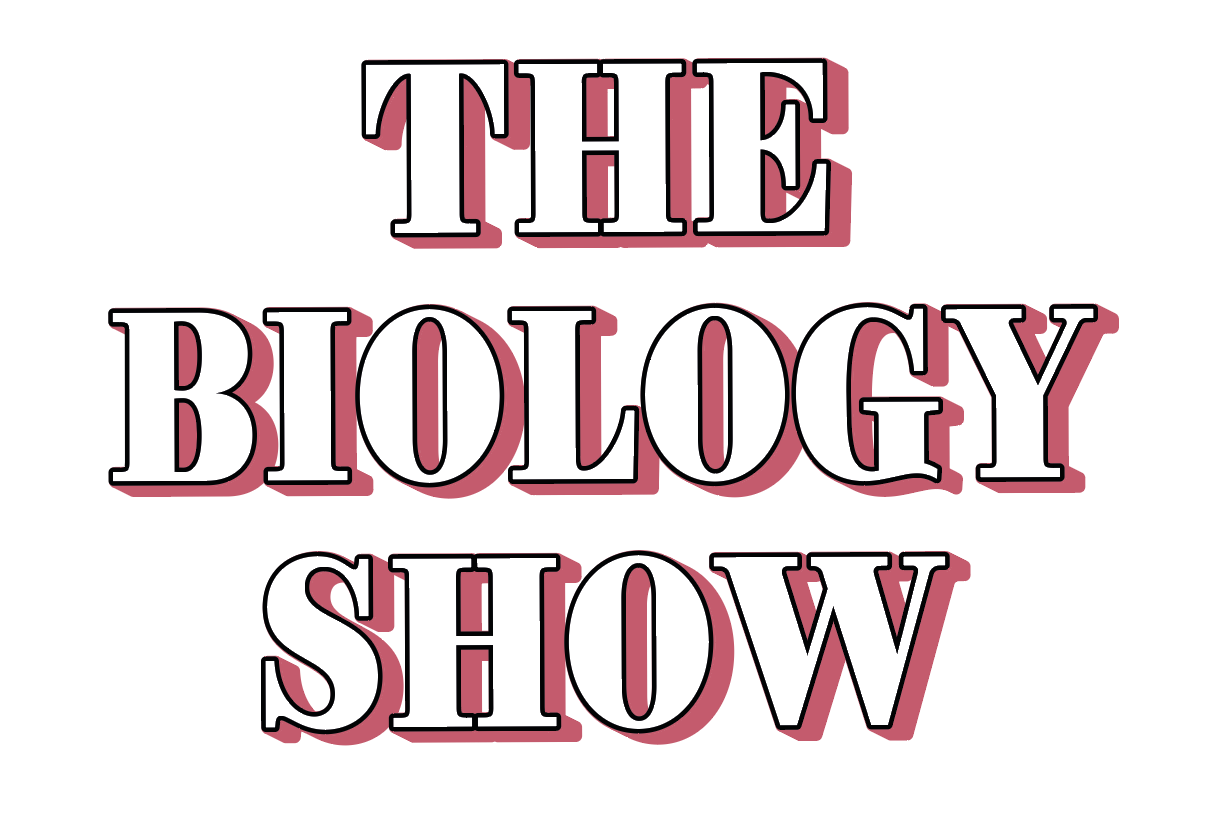 but I simply cannot figure out how to make the O in "show" inflate like that (and with the surround letters squeezing aside for it). I tried meshing and wrapping. The closest I can get is like this: 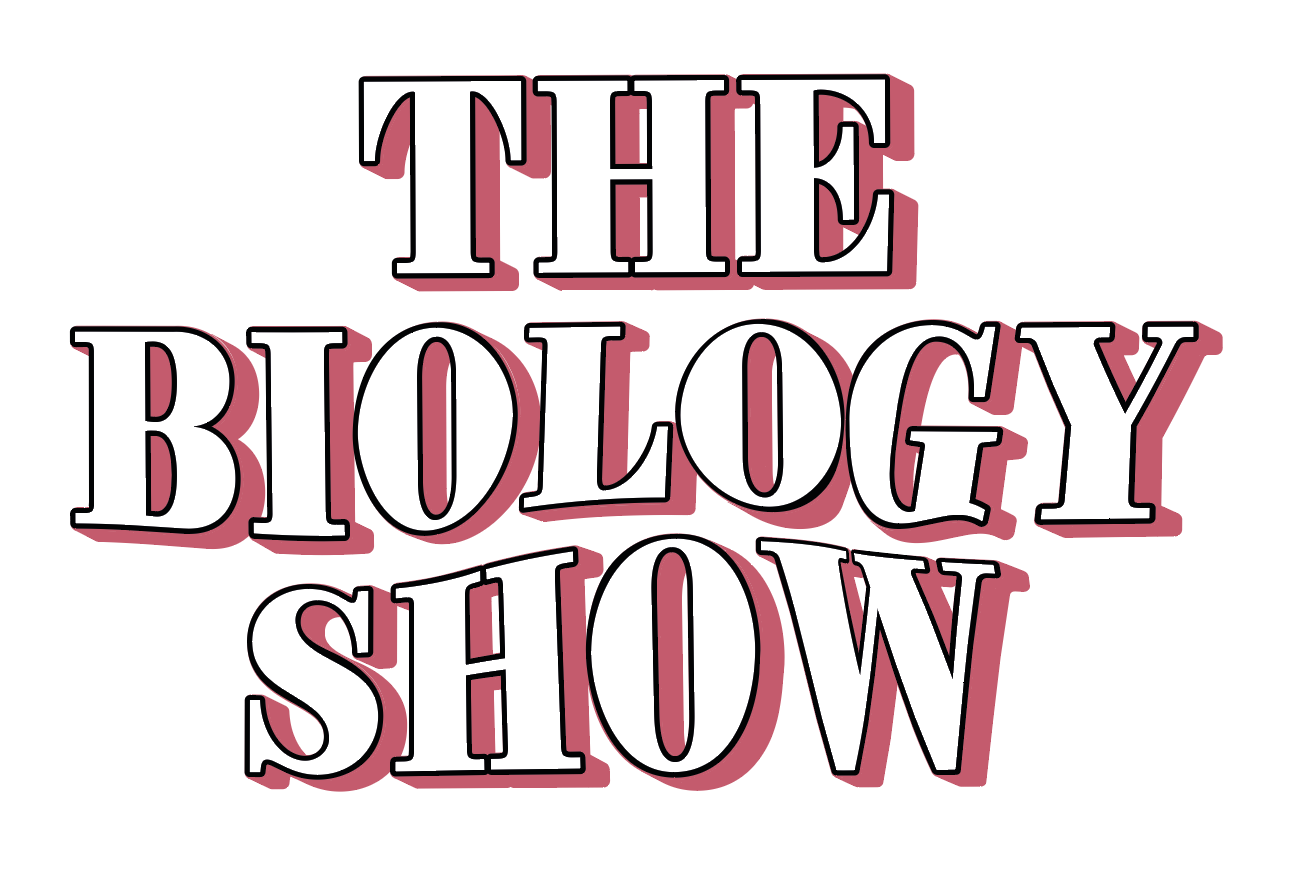 But it looks horrendously ugly. Now, I do realize that the creator of that Muppet Show logo did not use a wrap or mesh tool (instead, he/she probably just drew it that way), so I don't know how closely can I recreate that effect with technology (well, maybe it's just a skill thing). I think I will probably resort to drawing it by hand if I can't get it right.

Create each word as a separate text object with the stroke set to black, and fill set to white

Using Object > Envelope > Make with Mesh, apply a simple 1 column, 1 row mesh warp to each word, and distort as you wish by clicking and dragging the mesh handles/bezier curves.

Select all, then using Effect > Stylize > Drop Shadow, apply a red drop shadow with no blur.

Note that creating a more exact replica of the text is also possible, but it would involve tracing the letter shapes manually by hand, using the Pen tool. It's certainly possible, but it's probably copyright infringement.

Obviously you asked about the text "The Muppet Show". You seemingly have another answer which shows thoroughly how to distort ordinary straight text lines in a resembling style.

I guess you want an exact replica with all details, but you want to start from ordinary text.

It has a red extrusion add-on, which is easily generated with Illustrator's 3D extrusion effect. The plain text, of course, can be made by modifying a writing which is made with some resembling font. The text must be converted to curves and then you must edit the letters node by node to the wanted form. Ligature SH must be made by uniting in the pathfinder S and H. The job isn't easier than redrawing it, I bet it's heavier.

I do not believe you find an easy envelope distort mesh pattern which stretches whole text lines with few clicks just to the shown forms. Editing complex envelope distortion meshes is probably even more painful than editing the letters one by one.

If for some obscure reason I must copy the logo text, I would take the Pen and draw a copy (=manual tracing). Actually I would draw it in Inkscape, because the tools there seem to fit a little better to the job. But that's only an opinion.

The automatic tracing problem earns some attention because one can meet cases where its accuracy is enough.

So let's try it. At first the cleaning attempt. The black outline is not as bad as it generally is when somebody asks "Please, convert this to a sharp, smooth and accurate vector!" Its so solid that an image enlargener (not Photoshop's image resize!) can guess it's a sharp border and should stay thin. Enlargening to 400% with On1 Resizer and filling to a new layer with the paint bucket gives at least in small size pretty good filled letters:

The green layer was copied and pasted to both Illustrator and Inkscape. Black and white tracing (after finding a good treshold) gave in both programs quite the same result. Here's a zoomed shot from Inkscape. The fill is removed and a black stroke is inserted: 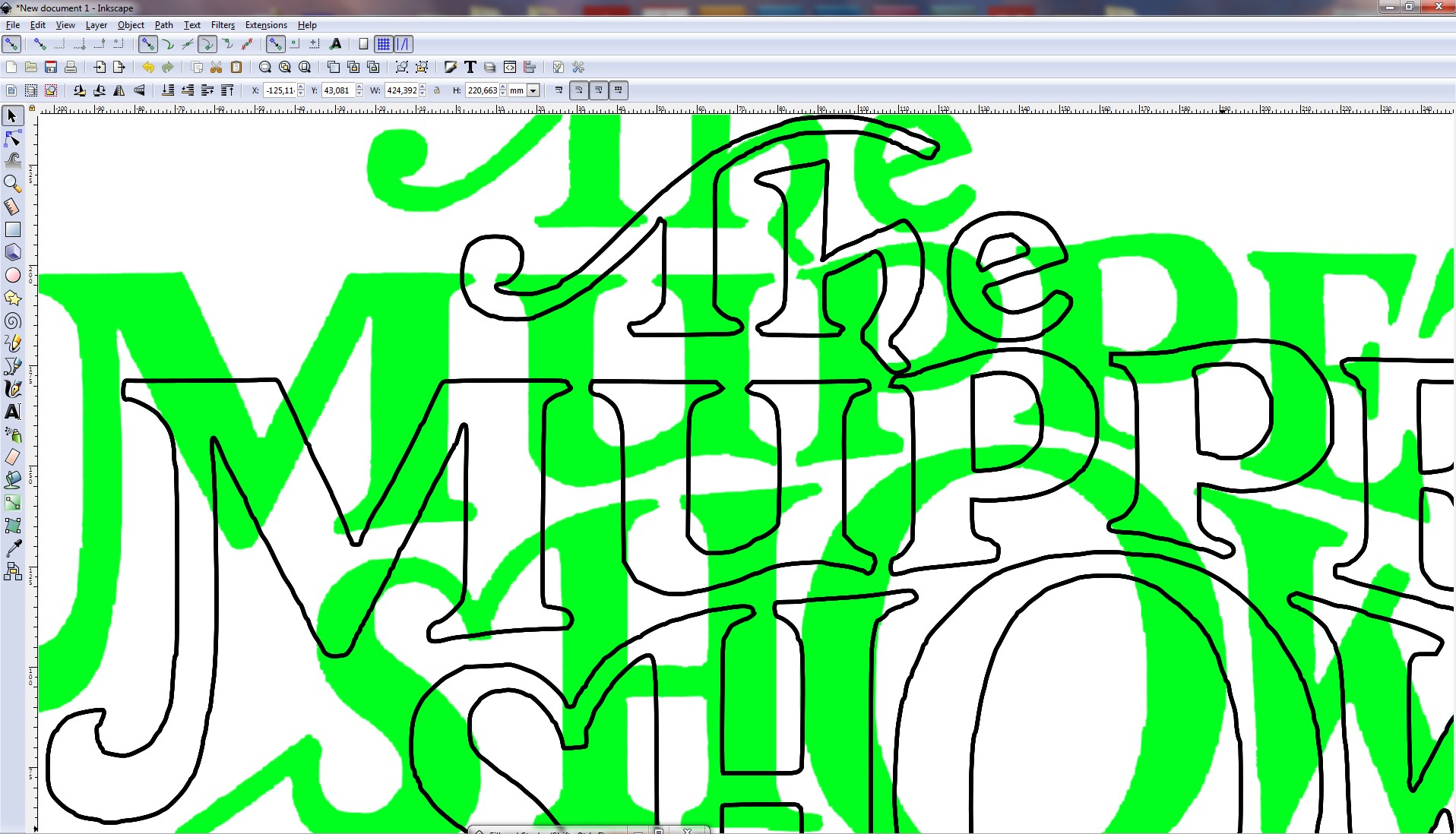 In Illustrator one can make the red extrusion. On top there's a grey version with black stroke. Here's the result: 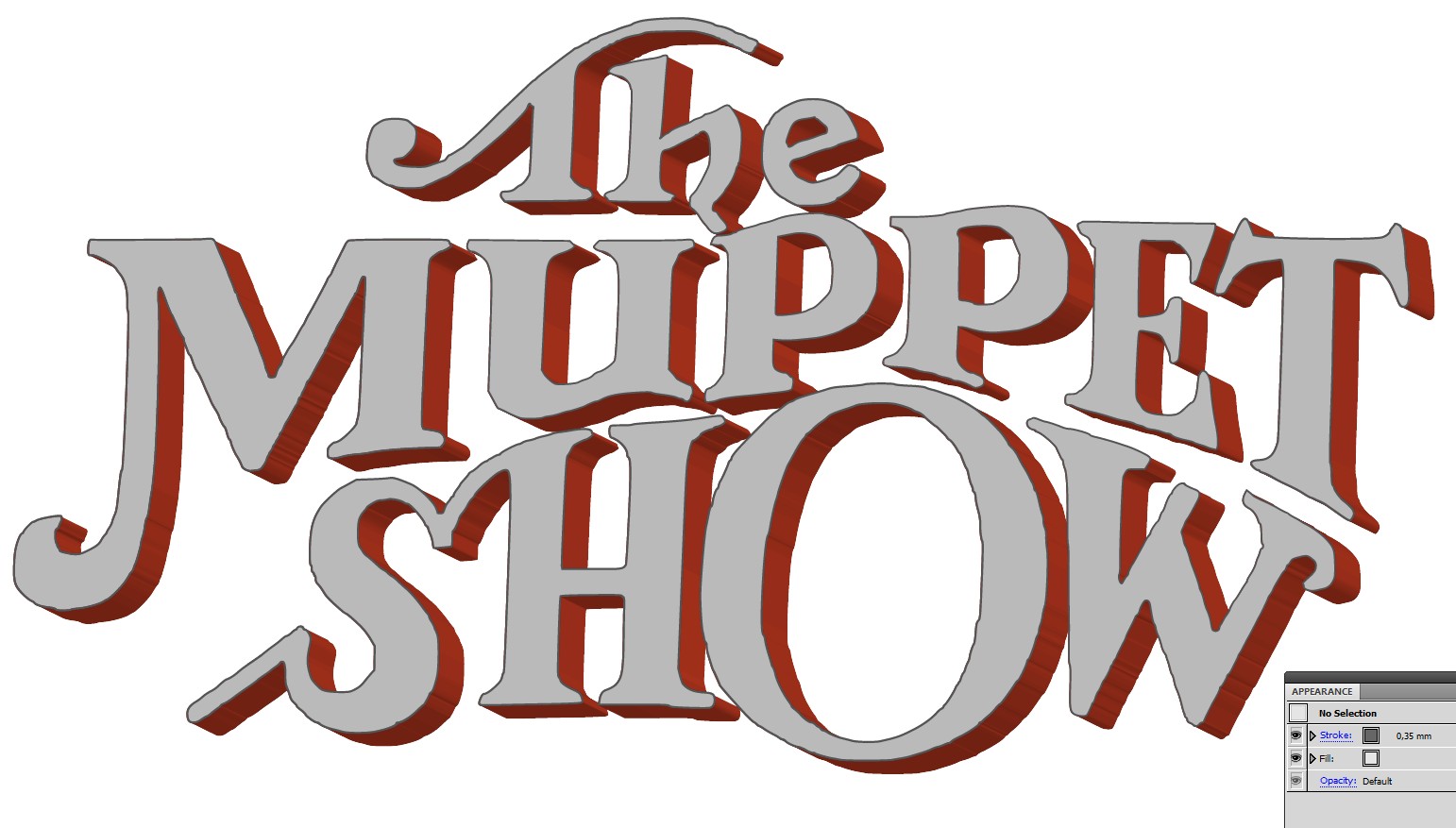 Quite coarse, I would say! But it could be perfect if The Muppets visit as guest stars in The Flintstones.

ADD: New edits in the question show that you really want make your own text but adapt the enveloping style to some degree from The Muppets. I recommend you to sketch some cages for the letters and then stretch your letters to the cages - not exactly, but keeping a good letter spacing. You must outline the text, ungroup and use the available distortion tools such as black and white arrows and the free transform filter (expand the result). I used only the arrows in the next example: 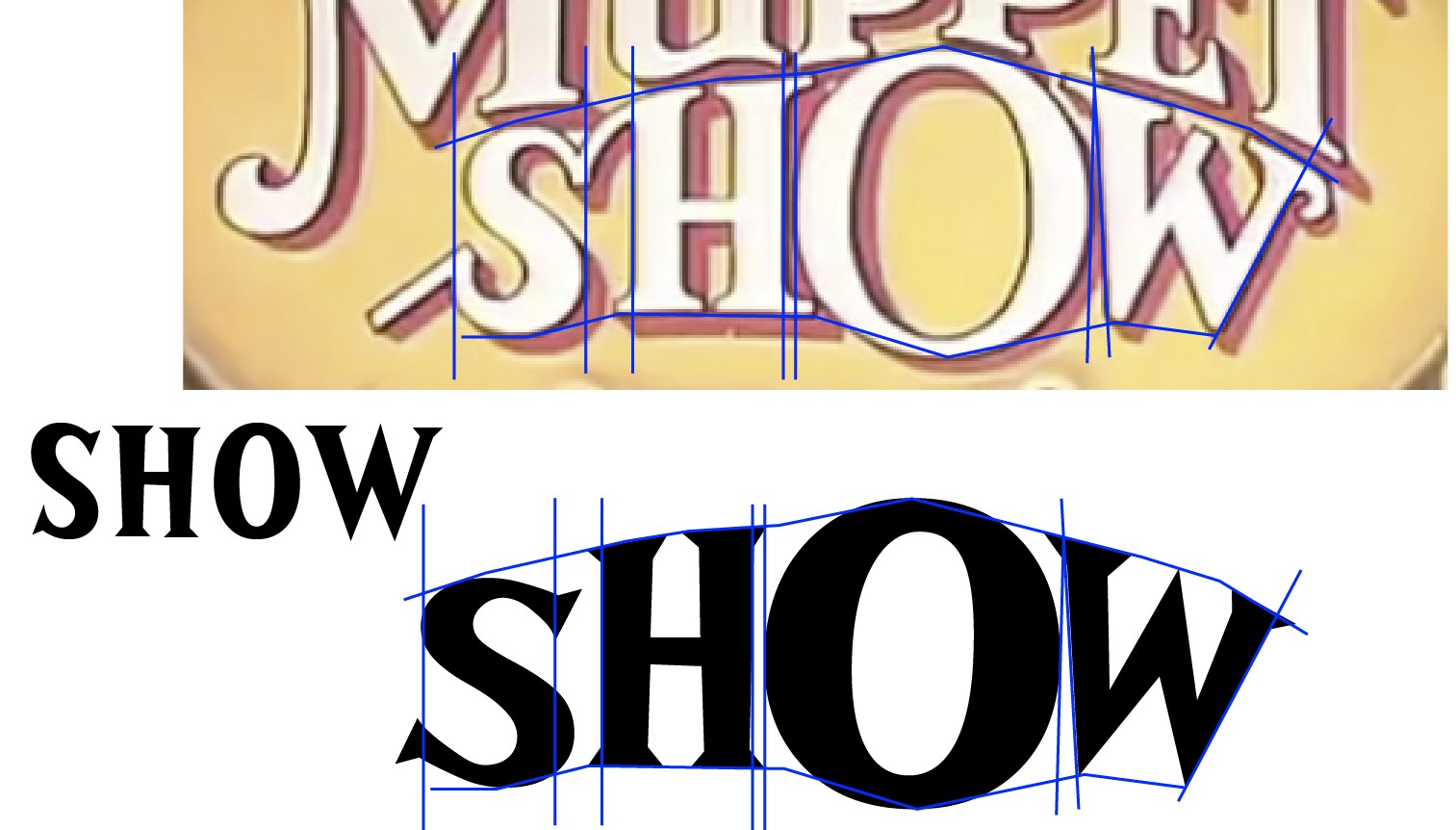 Envelope distortion make straight lines easily curved. I wouldn't use it if my original font contains straight lines. Arrow tools retain straight lines. If you move anchors of a curve, you must also adjust the handles to keep the curvature right. That's done in my S.

I think that those decorative extras such as the hook in the M are useful. You must draw something which fits to your letters. You can join combine new parts to the old ones for ed. with the Shape Builder or Unite in the Pathfinder panel.

2
Change text in a downloaded .eps file
1
How to recreate line effect in the famous Woolmark Logo
5
Ideal way to wrap a label around a bottle (3d extrude?)
0
Workflow and tools recommendation for detailed large print and web project
2
trying to recreate a logo & need some pointers
5
Recreate rough, handmade style strokes to vectorized lettering
5
How can I improve at drawing calligraphic font glyphs
5
Identification of a lively style of hand lettering from around 1900