making an action for join and smooth anchors in illustrator

Very commonly I need to join separate anchor points and convert to smooth whit these buttons. 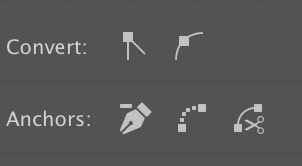 I wanted to speed up the process so I tried making an action for it so that I could just assign it to a Fn key, but neither of the actions show up when I record them. In fact it seems most other similar anchor interactions don't record in actions. Is there something I'm missing or is this just another oversight adobe will likely never get to fixing.

Alternatively, join at least has a keystroke (ctrl J) but converting anchor points to smooth doesn't have a keystroke that works in same fashion as when you click the convert smooth button. Is there a keystroke I'm missing or anyway to assign a keystroke to it?

What I feel works better is a simple menu shortcut..

If the anchors are already on top of one another....

You will be presented with a popup asking if you want a smooth point or a corner point, just select Smooth.

This shortcut is for Average then Join. By averaging the two points first (both vertically and horizontally), the anchors are precisely on top of one another. Therefore when you Join, AI assumes you want 1 anchor, not 2, and allows you to choose (asks you) whether that anchor is a corner point or a smooth point.

If there's some distance between the two anchors, you want to do this with an extra step...

The first shortcut simply averages the 2 anchors to the same location - this allows the second shortcut to ask you if you want a smooth or corner point when joining them.

In short, you don't really need an action. It merely takes some getting used to the spiderweb like shortcut. You'll always be presented with the smooth/corner pop up. I'm unaware of any way around that dialog window. But having the popup right there in front of you is much easier than hunting/peaking a control bar button, at least for me. And 90% of the time you can merely tap the Return/enter key to dismiss the pop up because it'll be set on whatever your last choice was.

This shortcut is a default shortcut and is buried in the keyboard shortcut menu somewhere. I'm not sure where, but I know it's there in case you want to alter it to a more convenient shortcut. I, personally, tend to not alter default shortcuts if it can be avoided so there's no learning curve when new versions are released.

Not the answer you're looking for? Browse other questions tagged adobe-illustrator vector actions shortcuts anchor-point or ask your own question.