Adding anchor points to group of strokes using another stroke

I'm trying to use a (complex-ish) shape to add anchor points to another group of paths where the paths cross over- however i'd like to do it without effecting the stroke weights etc as then the blend will lose its gradient effect. 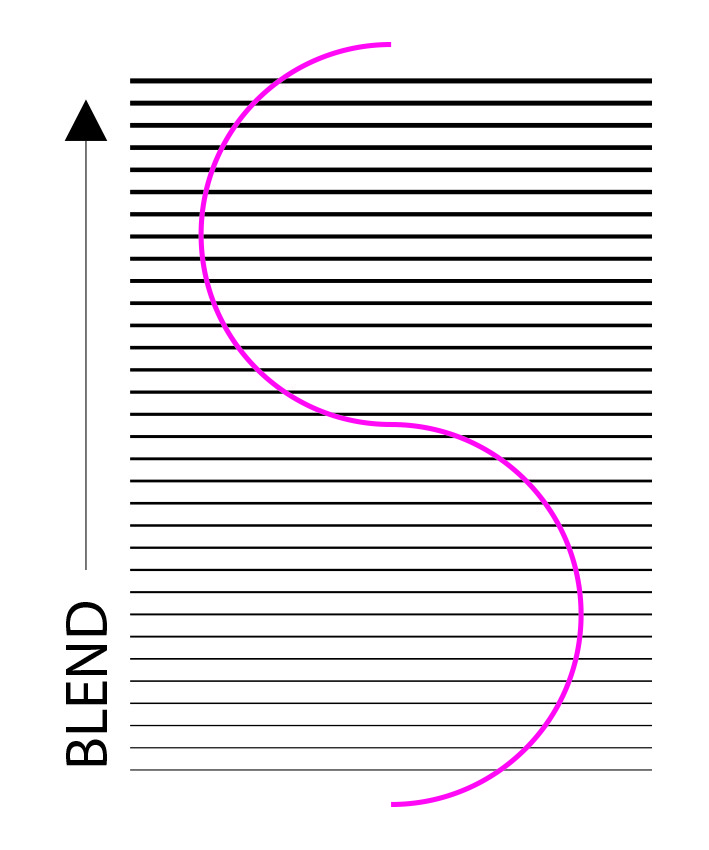 I've tried Pathfinder and different ways of stacking the two items but it either isn't doable or it instantly removes the stroke.

So, expand the blend. Select your red curve, send it to back and lock it temporarily to keep it safe.

Then add manually one by one with the anchor insertion tool new anchors to the crossings. Be sure you have snap to points and smart quides =ON. Otherwise you will not get the indications "On path" and "Intersect".

It's not known what is the future usage of the created nodes. If they are not needed for anything else than as markers, starting points for new curves, you can as well have invisible lines in front of your black lines or behind them for that purpose.

Copy at first your line mixture to the clipboard. Then make with pathfinder outline the splitted no-stroke cloud, as you already have done.

Delete from it the extras, leave only say left halves of the lines and group them. Give a good name to that group in the layers panel.

Paste in place the line mixture. Now there's anchors in the right places.

You can even join a ghost line and the actual line. You get a folded line where the marker is the end of the line. The stroke doesn't vanish if your ghost line is in the background when you join.

Not asked: Inkscape has some functionality that you maybe can use. Illustrator and Inkscape have a common file format, SVG. At least curves, their widths and simple colorings seem to work identically in both programs.

For Inkscape there's available an extension package for enhanced path operations. It's downloadable from here: https://gitlab.com/su-v/inx-pathops

Extension Generate from Path > Path Ops > Cut Path proceeds through a bunch of selected paths. The topmost path splits all underlying paths. Nothing vanishes. The cutter path and all formattings in splitted paths stay intact.

Unfortunately there's included no automatic tool for having continuous lines with the wanted new nodes. A programmer is still needed, if you cannot join the halves manually line by line.

Here's how I would handle this scenario:

Not the answer you're looking for? Browse other questions tagged adobe-illustrator path stroke illustration or ask your own question.

7
Why can I only see a path when it's not white?
0
Overlapping Stroke Anchor Points Illustrator CS5
6
Recommended workflow to expand paths without creating unnecessary anchors points
4
The pros and cons of using the appearance panel to create complex shapes and strokes in AI
4
How do I get rid off small lines that appear between paths in my logo?
7
Convert complex artwork into single color
0
Adding anchor points offset from intersections automatically in Illustrator