This is the 1977 "Charles Ross: Light Placed" poster by Jacqueline Casey and it's insane.

I was wondering how would one re-create a similar shape in Illustrator relatively easily. Just to clarify: I'm talking specifically about the shape which appears like a template for making a paper sphere, and not the contents.

Here's what I tried:

I feel like there's an easy way which I'm missing. Please share any ideas you may have

My approach would be modeling a 3D sphere using Blender and converting it into a 3D craftable paper model using this: https://tamasoft.co.jp/pepakura-en/order/index.html (No affiliation here)

A slower, but a free method, would be taking the initial 3D model, and extracting a base polygon of each row aligning it with the camera viewport. https://blender.stackexchange.com/questions/15045/how-do-i-align-the-viewport-to-a-face-normal 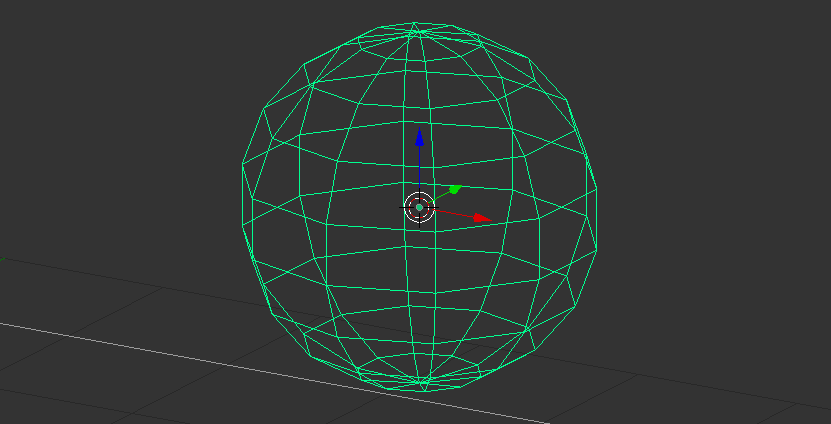 Another option would be manually marking the seams of the 3D model and unwrapping it. The process is a bit specific, so look at some tutorials online pls.

This is the result of partial work... Just a test.

But unwrapping can produce not exact shapes, that potentially do not assemble well on a real paper model, so use the previous method, face per face one. 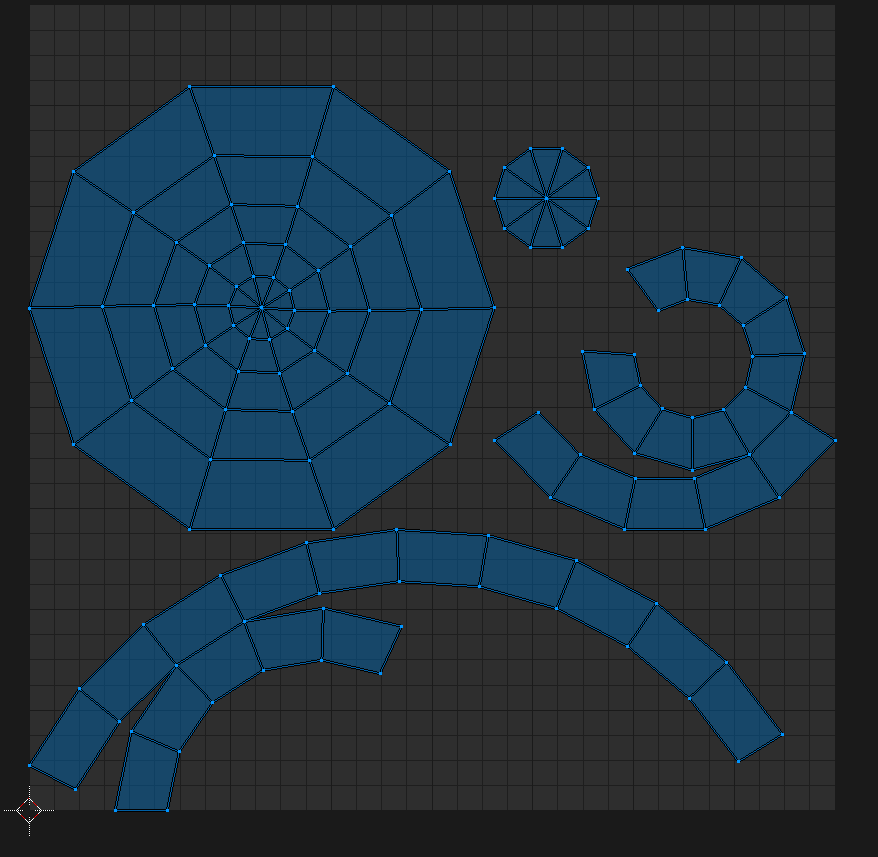 But a more exact way would be taking the mathematical approach @user287001 uses.

A simple way is to minimize calculations and let Illustrator find how long parts are needed. The slices are parts of cone surfaces. You should understand it if you watch the following revolved polyline. It's a half of approximated sphere. 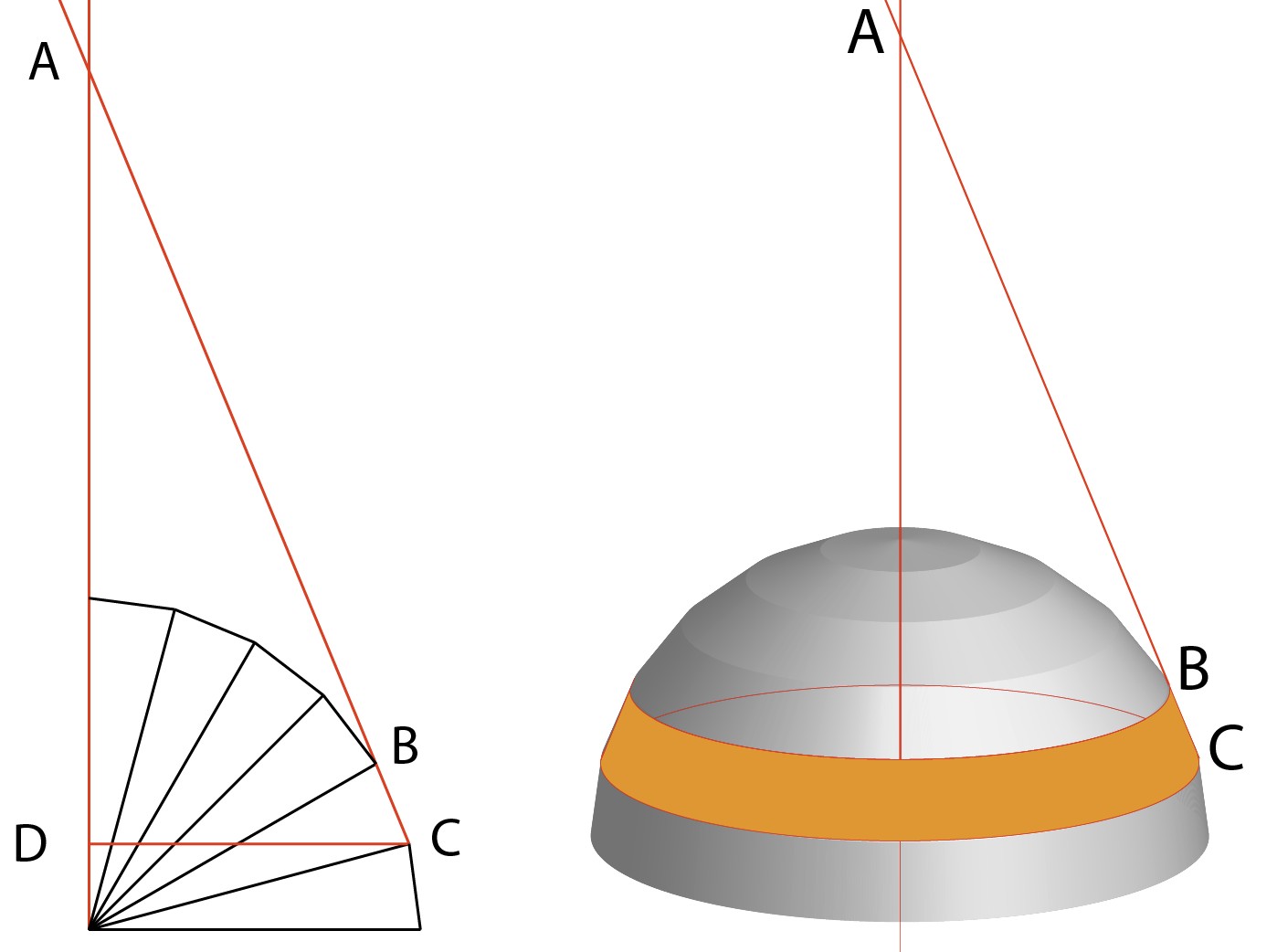 The orange stripe can be cut as an edge slice of a circle sector which forms the surface of a cone. Some calculations are needed. You must find the sector angle of the circle.

In the leftmost drawing you can find AC, BC and CD. AC can be got exactly by inserting a node to the crossing A and removing the extras with the direct selection tool. 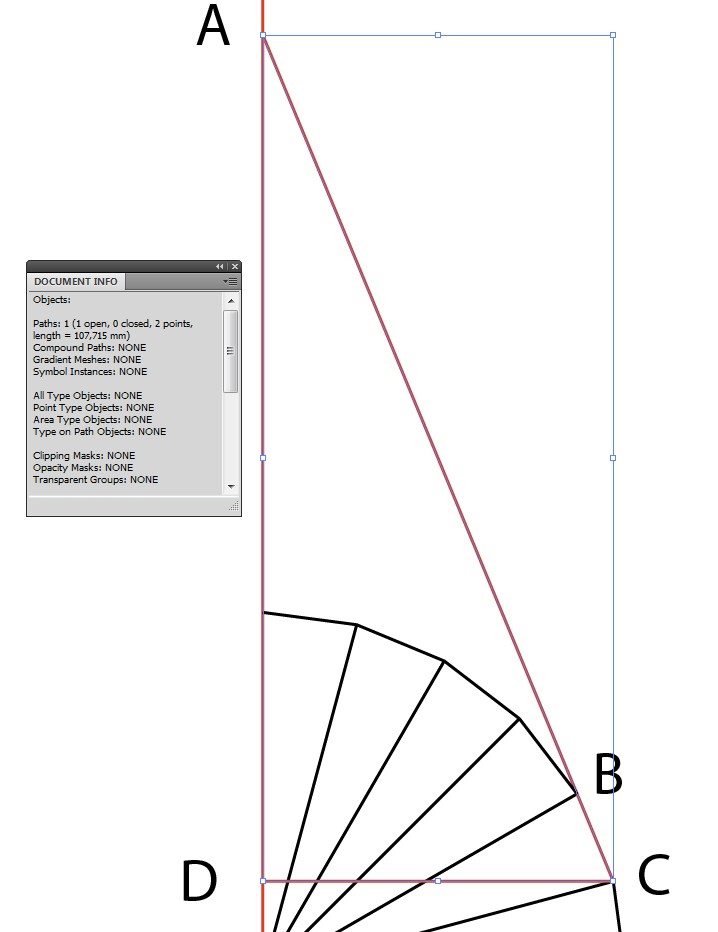 AC was drawn originally by extending the polyline segment BC holding the shift key and dragging the corner towards A.

Direct formula for the sector angle in degrees is (DC/AC)*360. So here we have the orange stripe: 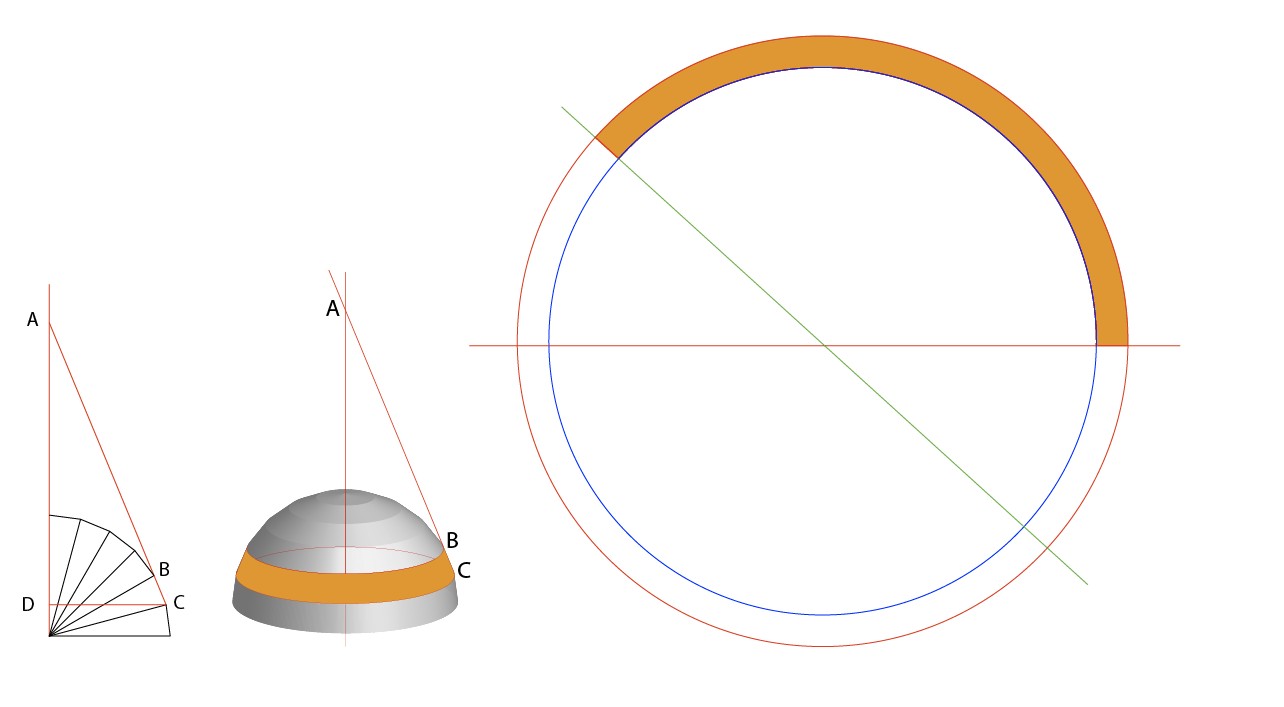 The rest of the needed stripes can be constructed in the same way. There's no reason why the stripes should have equal widths. It can be useful to make equator stripes and pole stripes 50% narrower and simplify them. The pole caps could be circle caps and the equator stripe could be one vertical cylinder instead of 2 opposite cones around the equator. Actually one gets a polygon just for it from Illustrator when he doubleclicks the polygon tool and inputs the values instead of dragging. 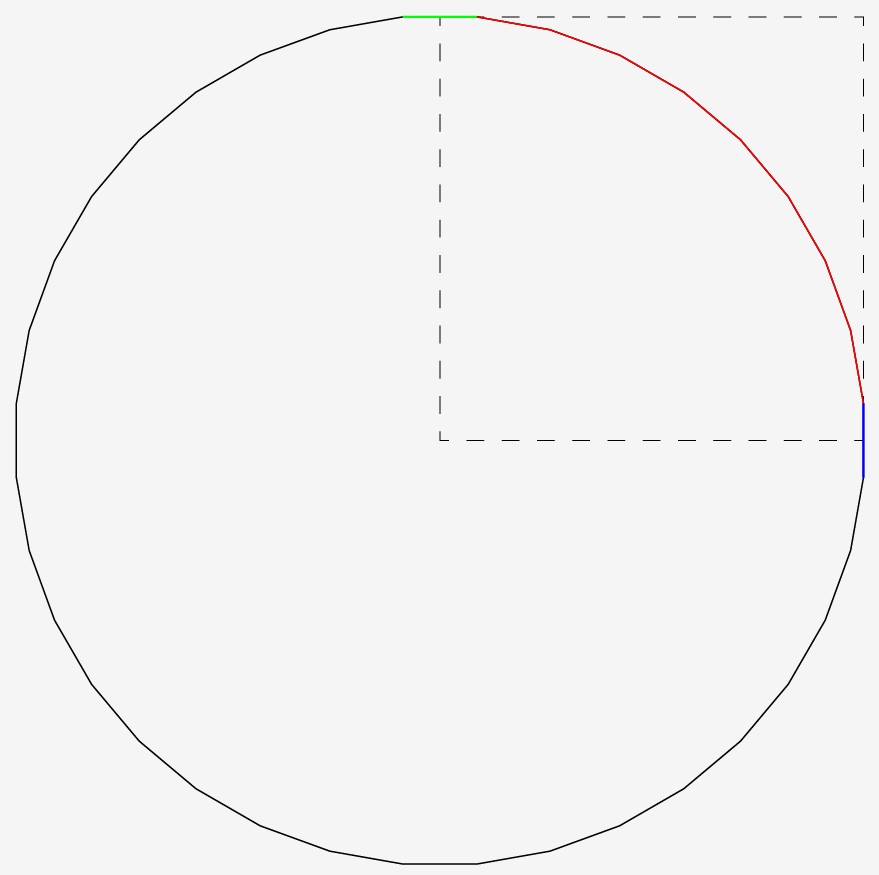 Actually you need the colored sides of it and the dashed square as a marker of the center. Red sides become curved stripes as the orange one was above. The green one is a round pole cap and the blue becomes a vertical cylinder (=a rectangle in a plane) symmetrically around the equator.

Automatization: Programming is needed. You may want to input the size of the sphere and and how many stripes it must have. I do not believe blending does the trick, altough I cannot prove that nobody will ever find good blending settings.

What to program: Trigonometric formulas for the stripe dimensions, drawing actual curves and the nesting (=placements for effective cutting). Programming and deriving the needed formulas are beyond the scope of this answer. But you can try this old-style Excel worksheet which contains your example case: https://www.dropbox.com/s/8dlssrkrdh7ebd9/spherestripes.xls?dl=0

It gives the dimensions of the needed stripes. Only the northern hemisphere and the equator are calculated, copy the stripes for the southern hemisphere.

If you happen to have a high end CAD program such as Inventor, Solidworks, SpaceClaim, Catia or other high cost stuff in the same league, you can revolve a N-gon to get a surface:

Only the northern hemisphere + the equator are revolved to keep the image simpler.

Because the surface stripes can be unfolded to plane, you at first split the surface to stripes. Assign some thickness to them and unfold them with the sheet metal functionality. Then you will have the stripes. Unfortunately I cannot show it in practice because I haven't such ($5000,-) software, the preceding images were only screenshots from entry level freeware CAD.

But nothing prevents to test the paperwork unfolder Pepakura that user Rafael suggested. Upvote him, if you see this useful:

I saved the revolved shape as STL file and imported it to Pepakura demo: 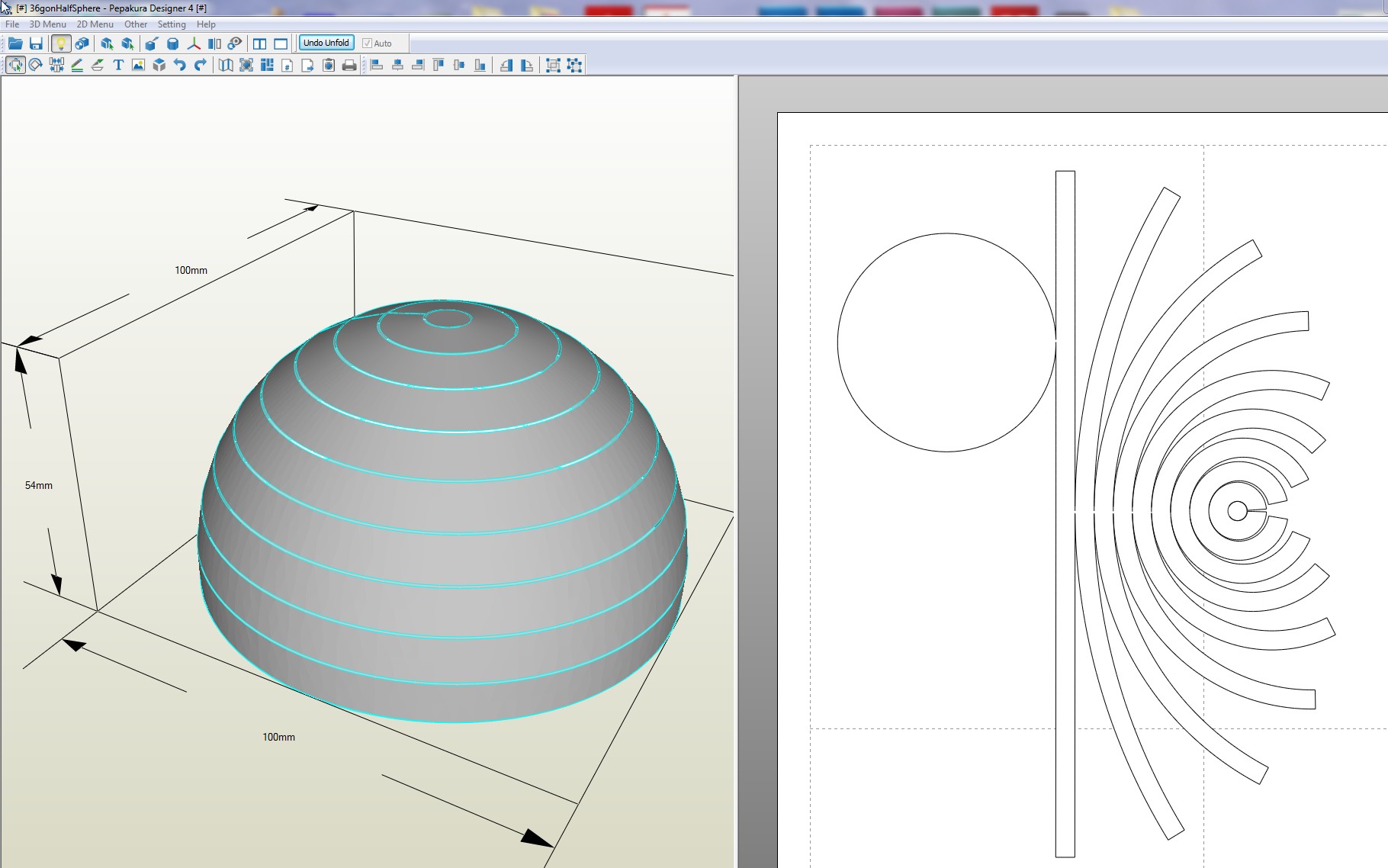 The circle in the left is the bottm cap. Not bad, I would say. Pepakura did the conversion in few seconds. It accepts also OBJ files.

In illustrator one can change the stokes, remove the unwanted parts, fill areas with the shape builder, duplicate those stripes which are needed for the southern hemisphere and move things to artistically acceptable places and positions. Here's what I got in a minute: 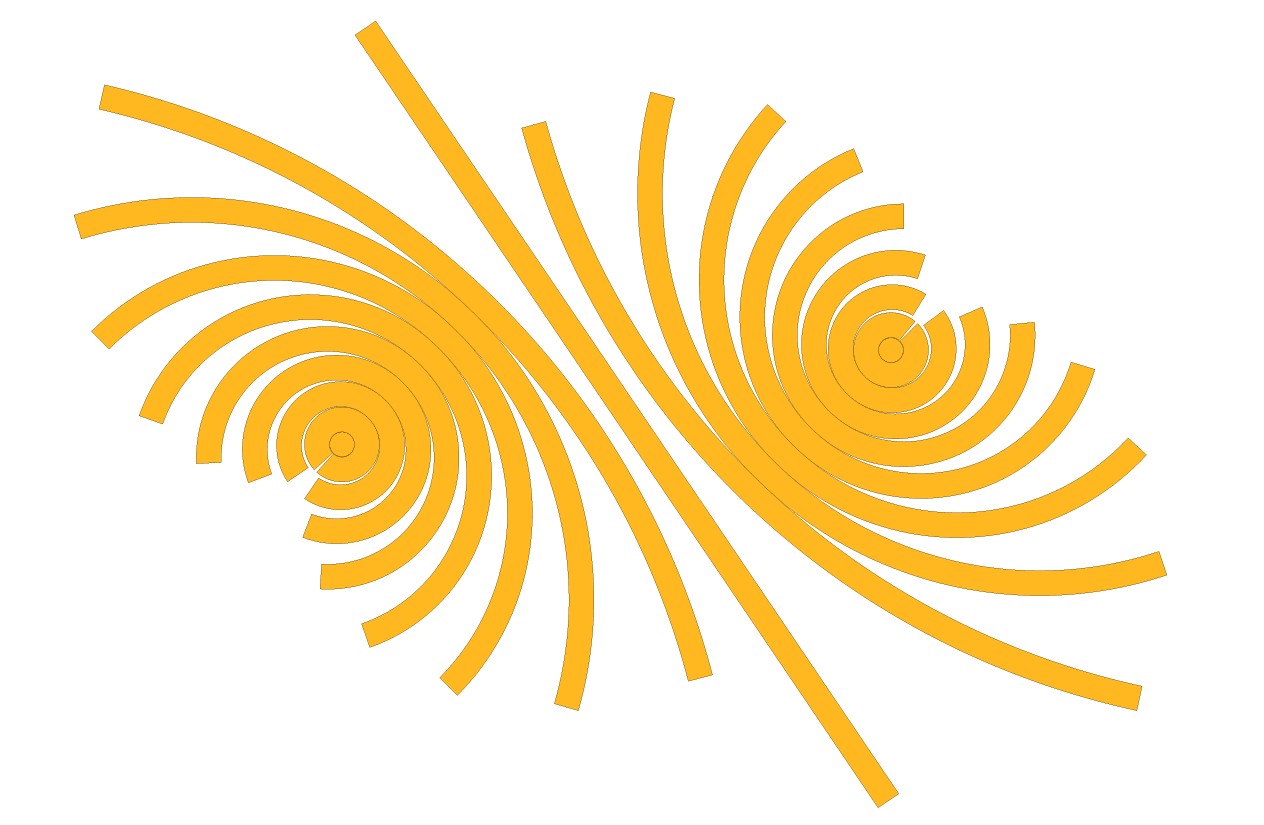 Filling with Shape Builder is actually a must, because the SVG from Pepakura contains a high number of unconnected line segments. There cannot be curves because STL file itself contains only straight lines.

It's definitely a Blend, maybe made by parts: 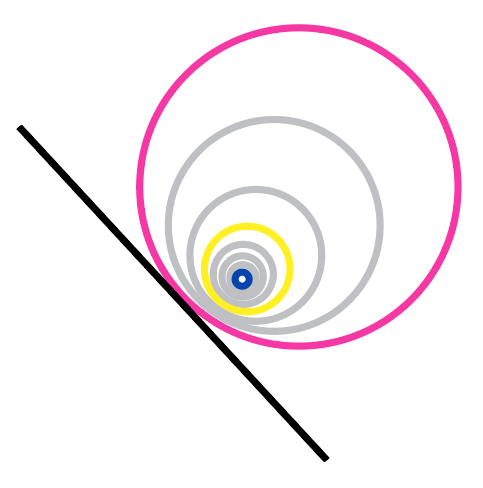 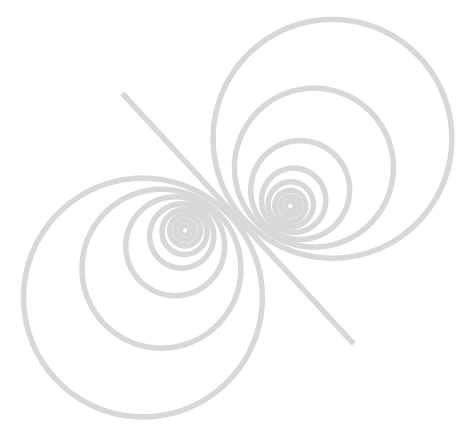 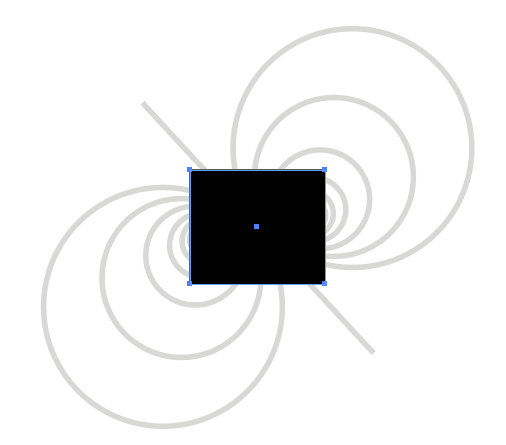 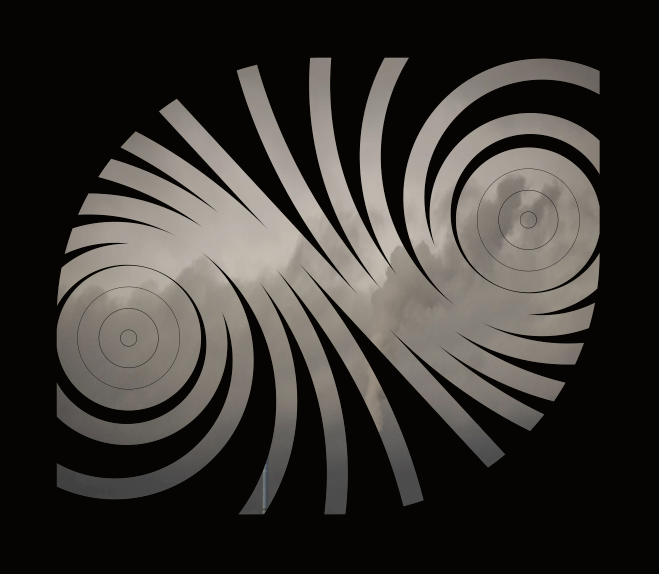 9
Is it possible to link shapes to a master shape, so that modifications to the master like repositioning, affect all linked shapes?
4
Adobe Illustrator: Creating a three-dimensional cone-like shape/mushroom cap
4
The pros and cons of using the appearance panel to create complex shapes and strokes in AI
3
Making a circle to intersect with other path(s) in Illustrator
2
Creating a rounded corner on a shape
0
Help identifying effect(s)
0
Illustrator: Using 'Unite' Function in Pathfinder Window Creates Erroneous Anchor Points/Shifts Shapes
0
Different bitmap/raster shape gradient like this example?