I've created a booklet in InDesign that I want to prepare correctly for printing at my local printers. This file contains .psd graphics that on my print drafts at home look a bit low resolution or cracked... Do I need to embed them or do something to make sure that they will be printed exactly like the originals' high resolution format?

Basically, how to prepare the whole file for printing ensuring that I get the correct fonts, high quality .jpg photos and high quality .psd files in it at the final print?

InDesign does not "store" any data for placed images. Everything is a "link" to the original image file and not "embedded" within InDesign.

What happens to placed images in InDesign upon output....

Where this becomes problematic.....

If you place a low resolution raster image into InDesign, InDesign uses that low resolution image. It won't create a "better" image. Whatever the original is, that's the only image InDesign can use.

If you place a high resolution raster image into InDesign and then scale it up (enlarge it), you have stretched the resolution. In many instances this will cause quality damage to the enlarged image. It is best to never enlarge an image more than 105% within InDesign itself.

If you are scaling raster images within InDesign, it is best to keep an eye on the Effective PPI which can be seen in the Info Panel (window > Info) with the image selected in InDesign. The Effective PPI should always meet the minimum requirement needed for output.

As for why your test prints look poor, it's not really possible to tell without much more information regarding image sizes and resolutions as well as hardware (printer) capabilities. It could be a hardware limitation of your printer, it could be the images themselves, or it could be how you've transformed images within InDesign.

InDesign has an incredibly powerful pre-flight & packaging system set up for exactly this task: 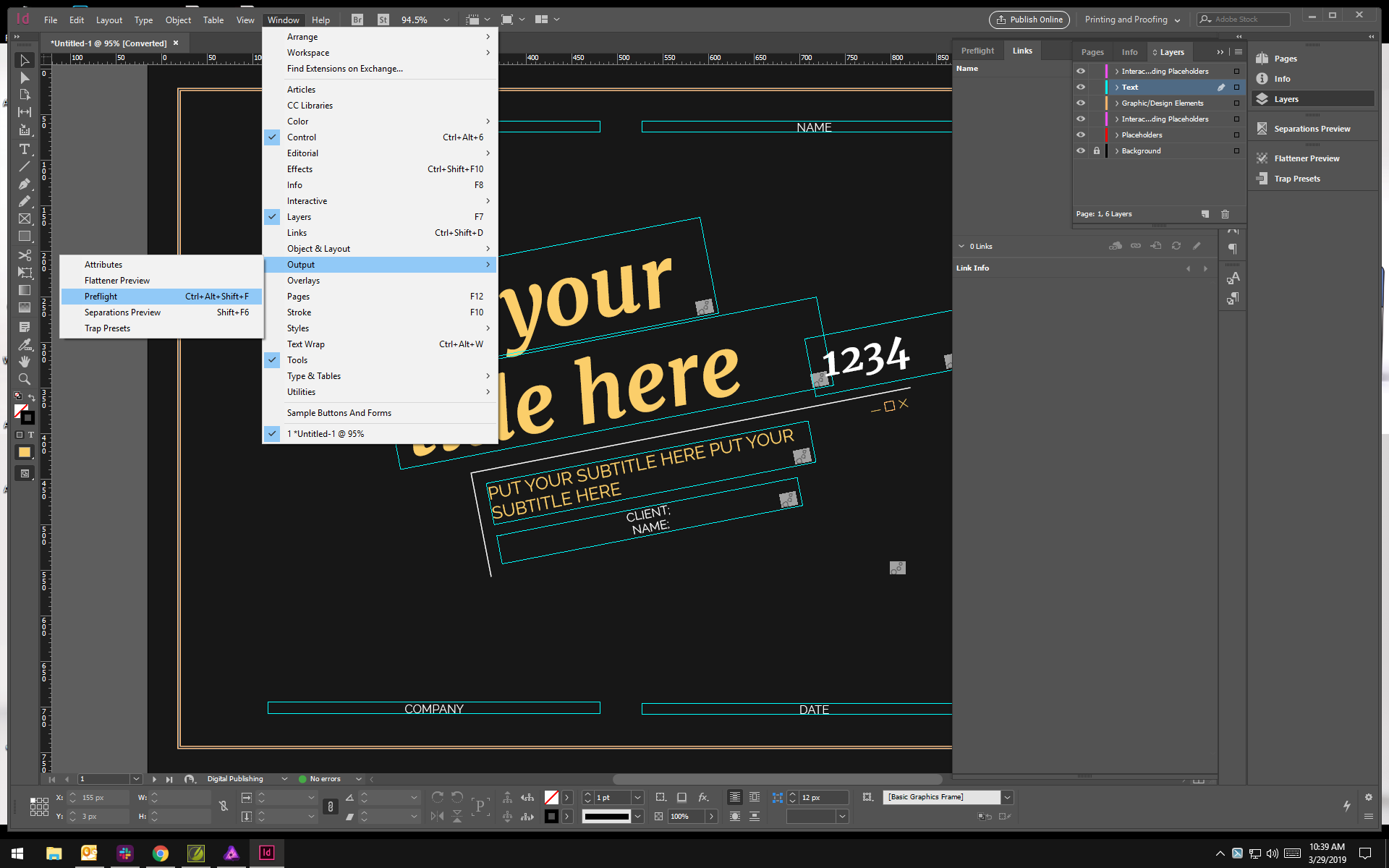 Once you've opened the palette up you can choose (or create) an appropriate pre-flight profile: 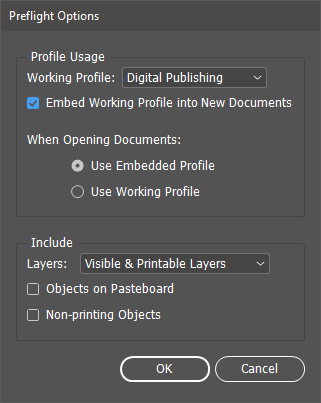 You can edit that profile and add all the relevant resolution and colour space parameters which you feel appropriate to this given project: 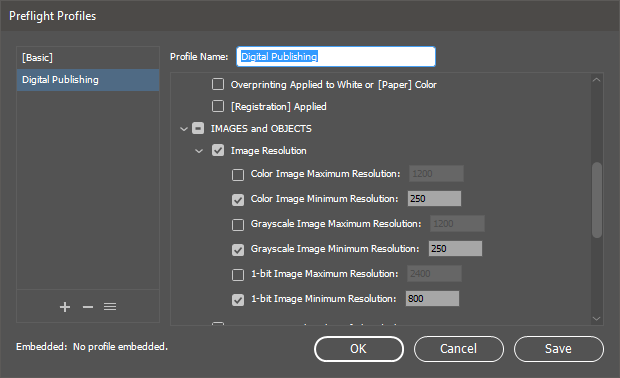 Which will then become an instant ongoing pre-flight in the panel against all such issues: 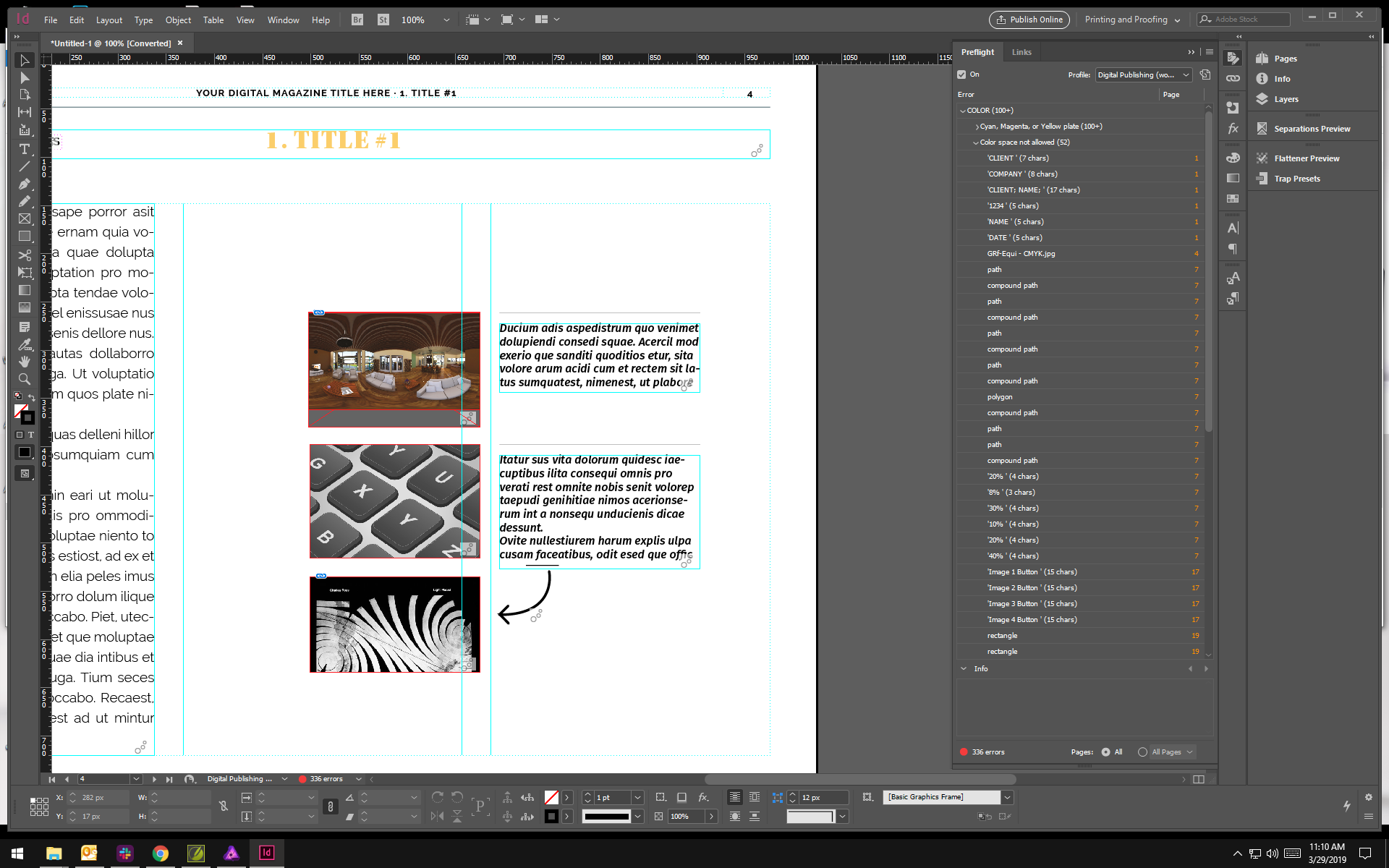 And this will let you know instantly where and what issues you have before you go out to print.

Once you are ready to print, use the Package command to build a fully press-ready package which includes all linked resources (including fonts) in one resource folder,; it creates a new "packaged" version of your ID file, with all links repointed to the correct resource in the packaged folders - pretty much insta-ready to FTP up to your PSP (Print Service Provider) and you should be good-to-go.

Not the answer you're looking for? Browse other questions tagged adobe-photoshop adobe-indesign print-design digital-printing or ask your own question.

3
Scaling images down in InDesign and ppi

13
How to print photographic postcard/business cards
3
What is the highest possible print resolution in book publishing?
1
InDesign CS4 displays transparent image correctly on screen, but the exported PDF sometimes prints a faint background
1
Is it possible to print designs with huge resolution?
0
High resolution images scaled down in Illustrator are blurry when zoomed in as PDF in Adobe Acrobat?
0
Best format to save Photoshop artwork for printing?
2
Printing magazine as PSD instead of PDF?
10
Why would a commercial printer require all text to be outlined?
3
Best way to email huge .ai file (2GB) for printing?