How to create 3D effect (relief) in lines (adobe illustrator)

How can you create this 3D rilief looking effect in lines like there is an object laying underneath.

This question might already being asked on the forum, But can't find it..

Edit: Someone mentioned in the answers it might be a plugin for illustrator, it's called Afternow by Scriptographer. But this plugin isn't up to date anymore since adobe CS7 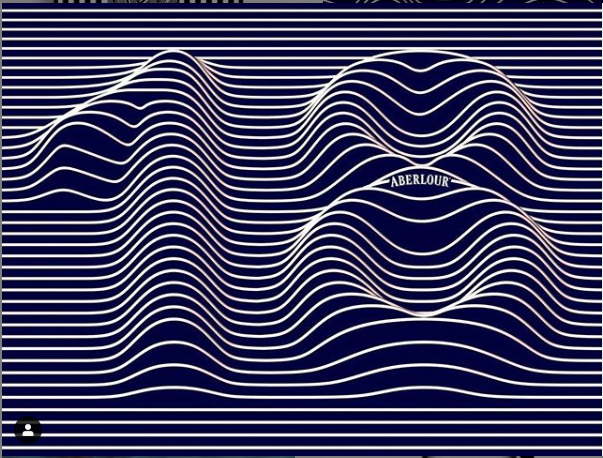 It's bended straight lines on a plane. Theoretically it can be made in 2D - just bend some lines. There seems to be also some faint coloring to create a shadow like in 3D renderings.

An example (nothing fine formed, only a coarse and quite thin ring):

Draw a bunch of equally spaced horizontal lines, three ellipses and a vertical line in the middle 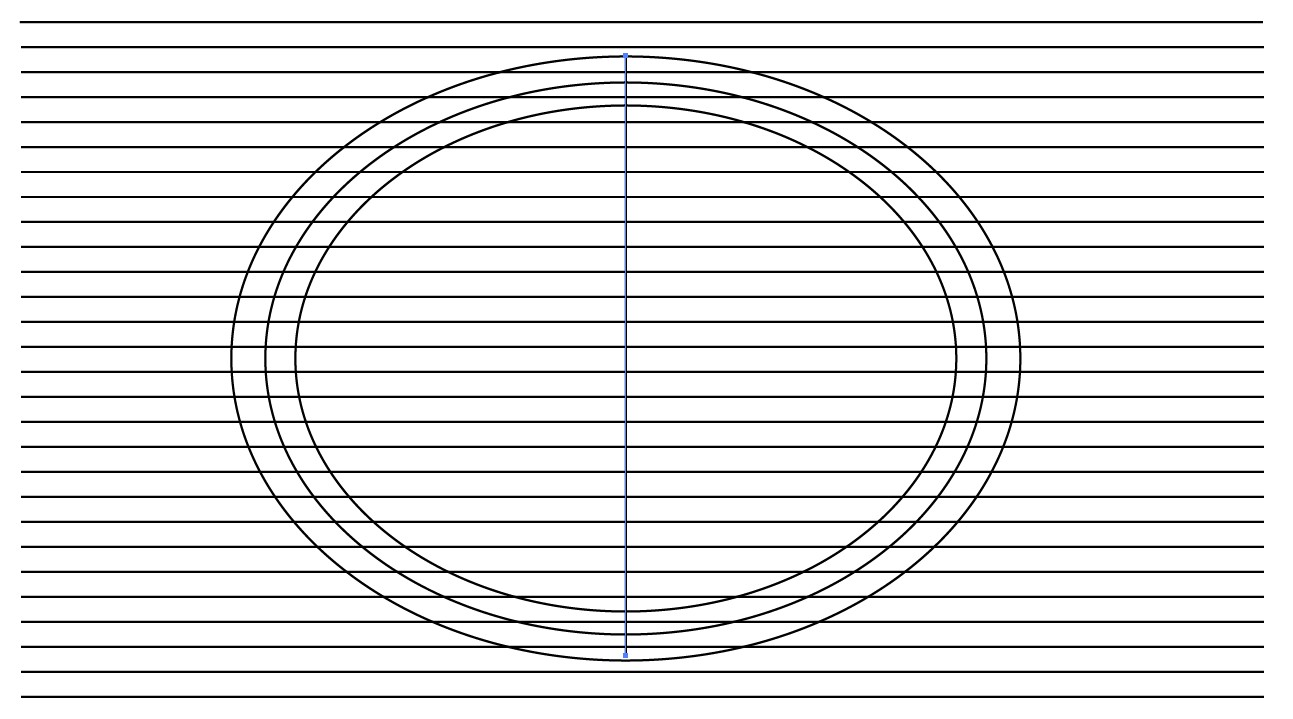 Split all in every crossing. Pathfinder panel has button Outline for it. After applying "Outline" ungroup and remove everything, but the splitted horizontal lines. 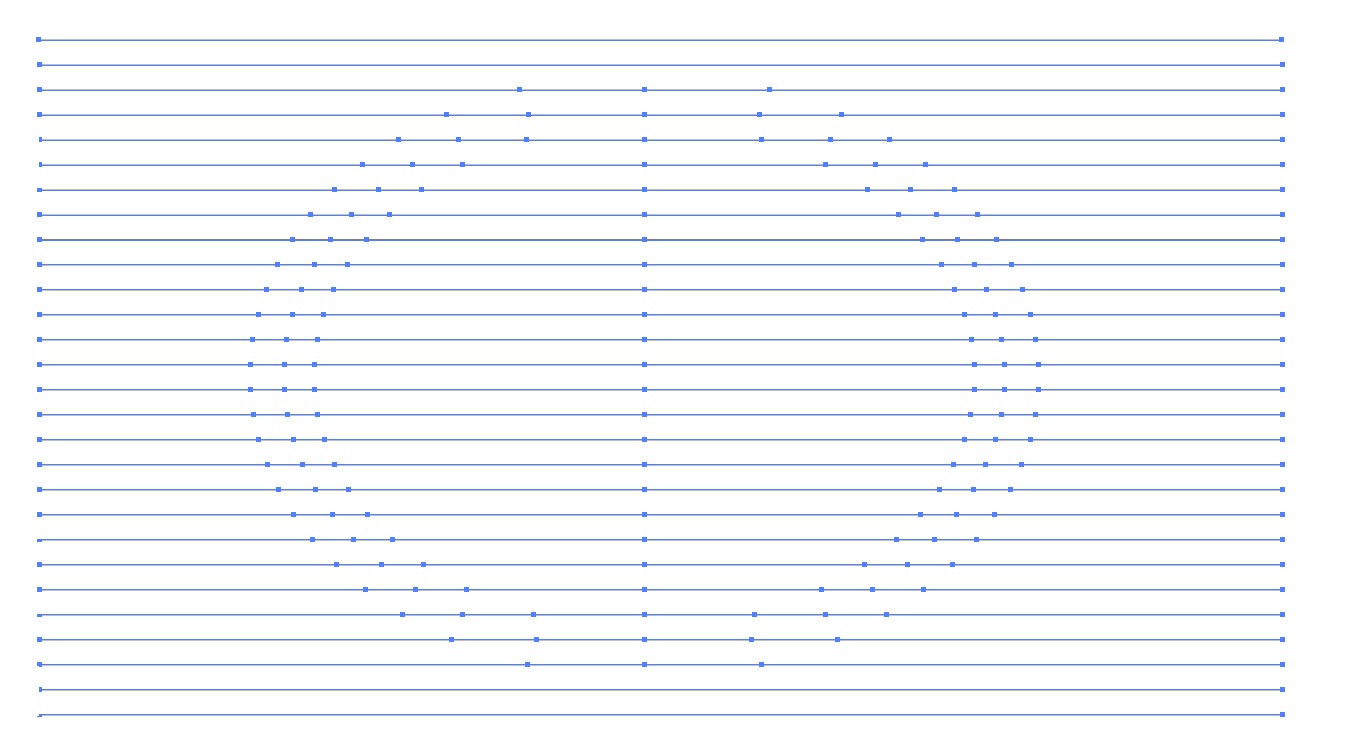 Join the lines again. They can be as well a single path. Select all and press Ctrl+J. A thin Stroke is useful for later steps. 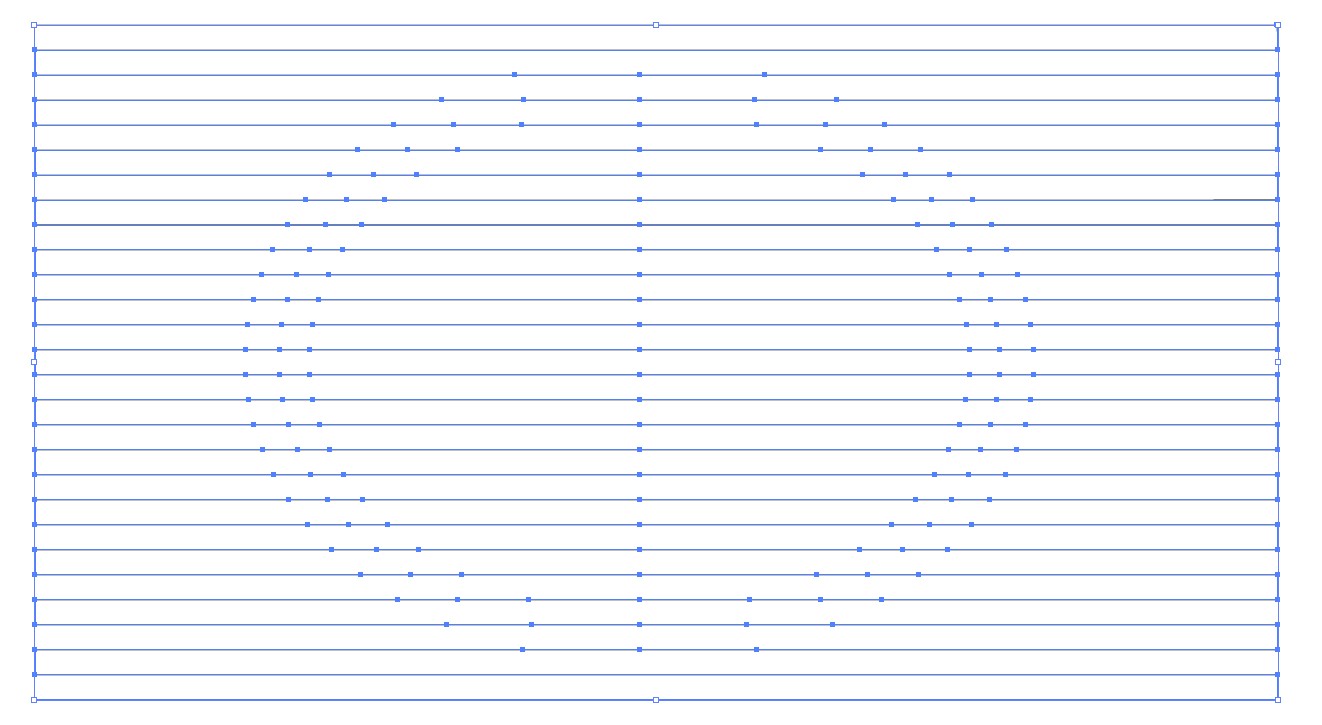 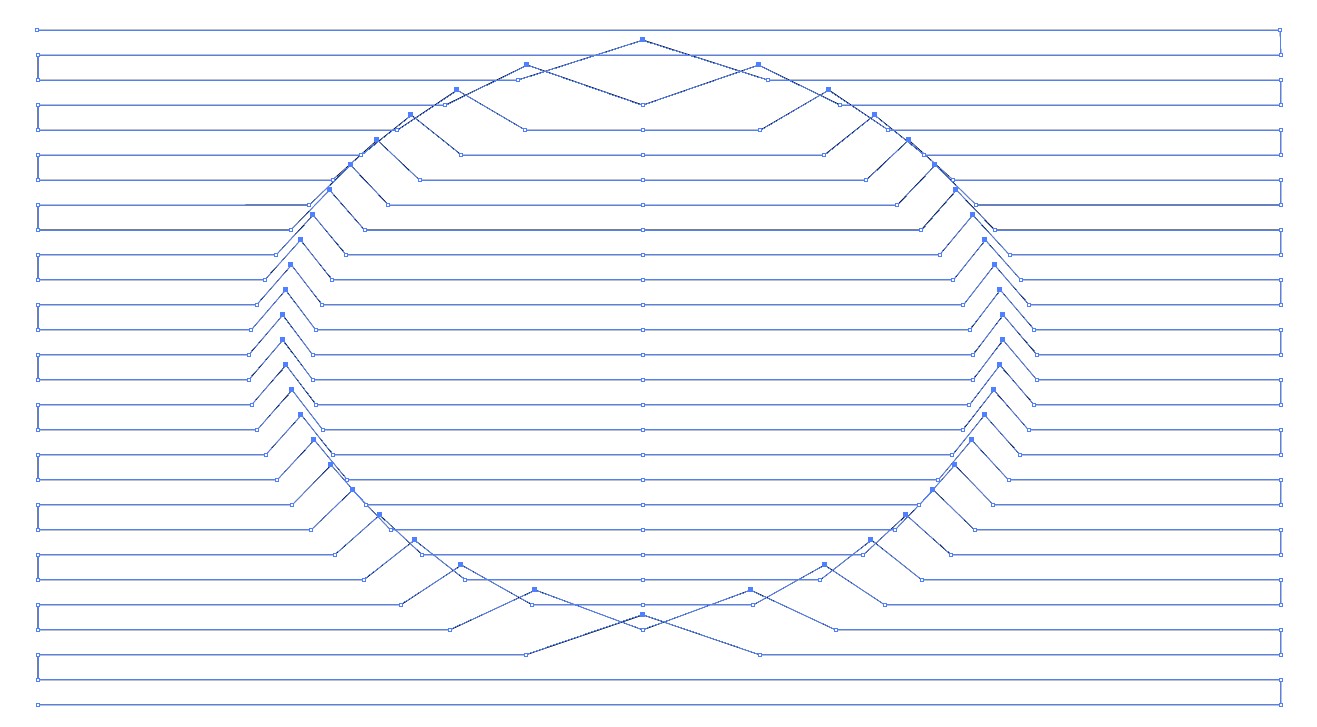 In the bottom there was one line missing nodes due poor calculations. But I inserted them separately and made the needed shorter push. 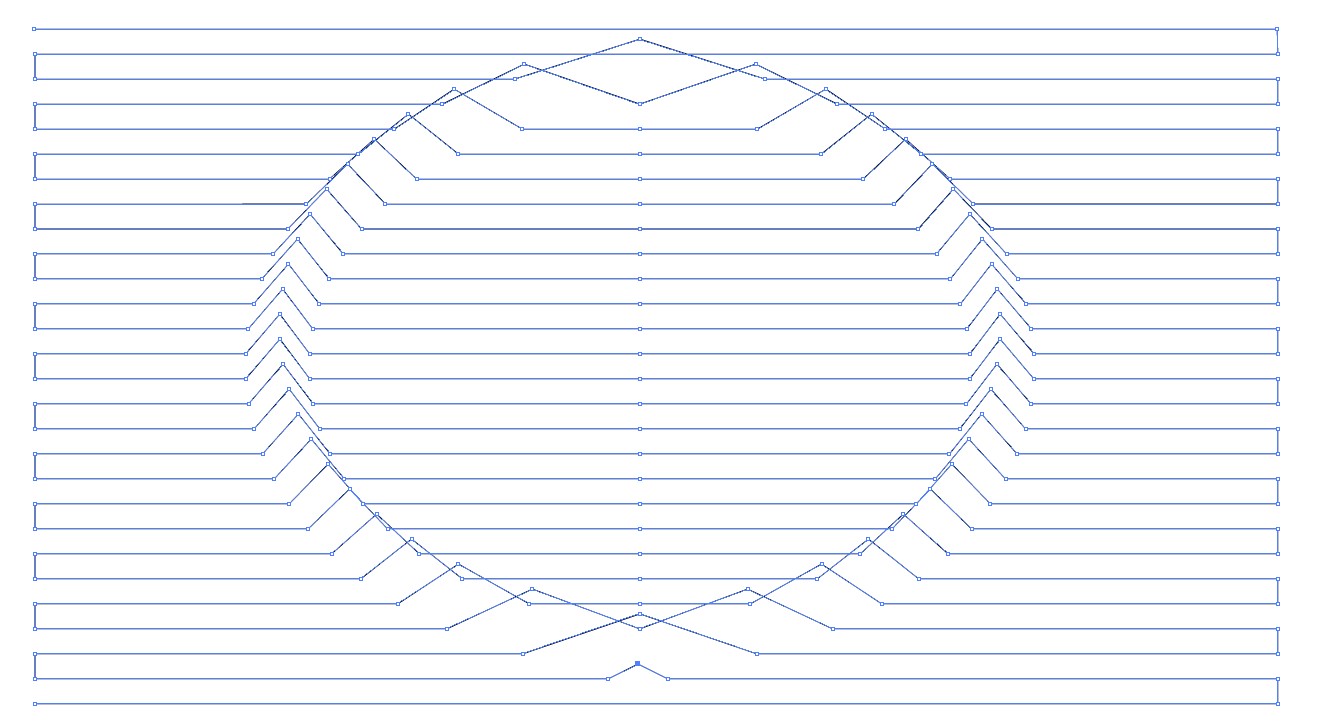 Next step is to add effect Stylize > Round corners. It makes circular roundings which look out non-smooth due steep changes in the curvature. It's fixed by fixing the effect (=Object > Expand Appearance) and applying Object > Path > Simplify: 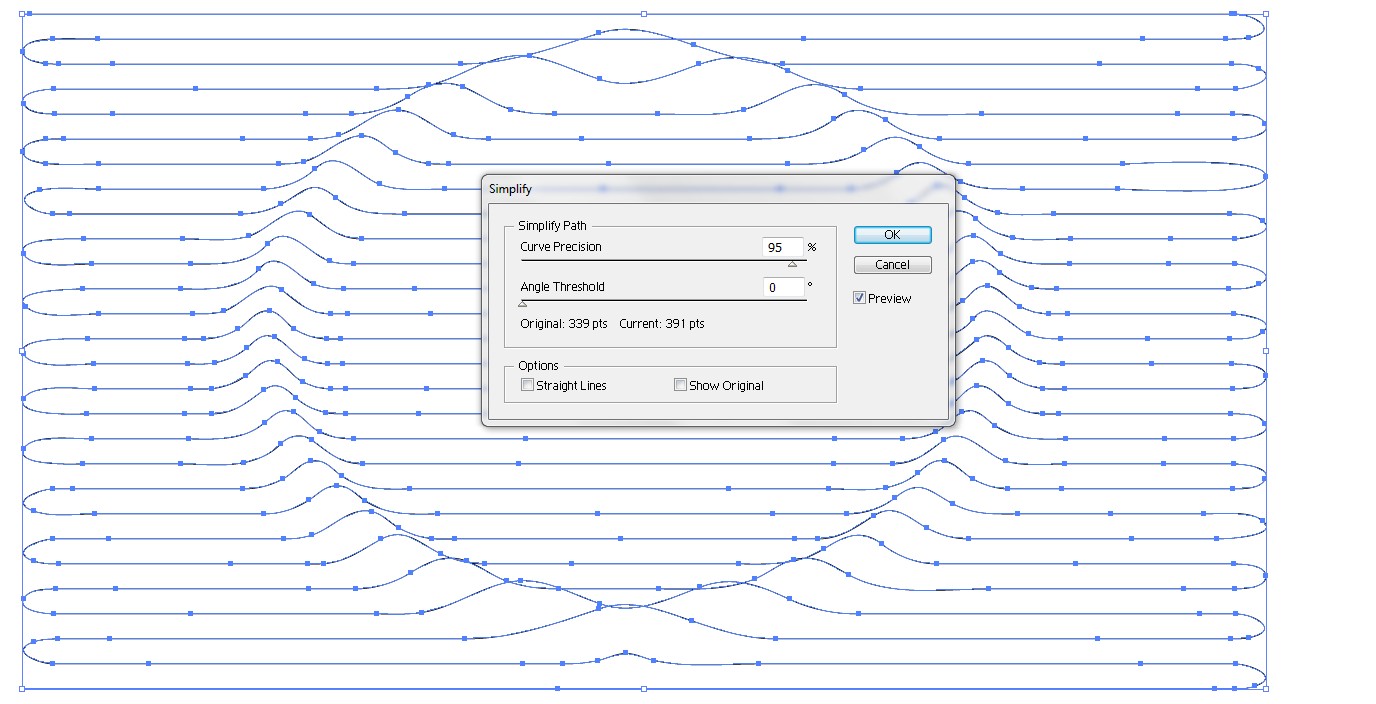 Add vertical lines to the right and left to get fillable areas. Fill them with the Shape Builder. Delete remnants and select good fill and stroke: 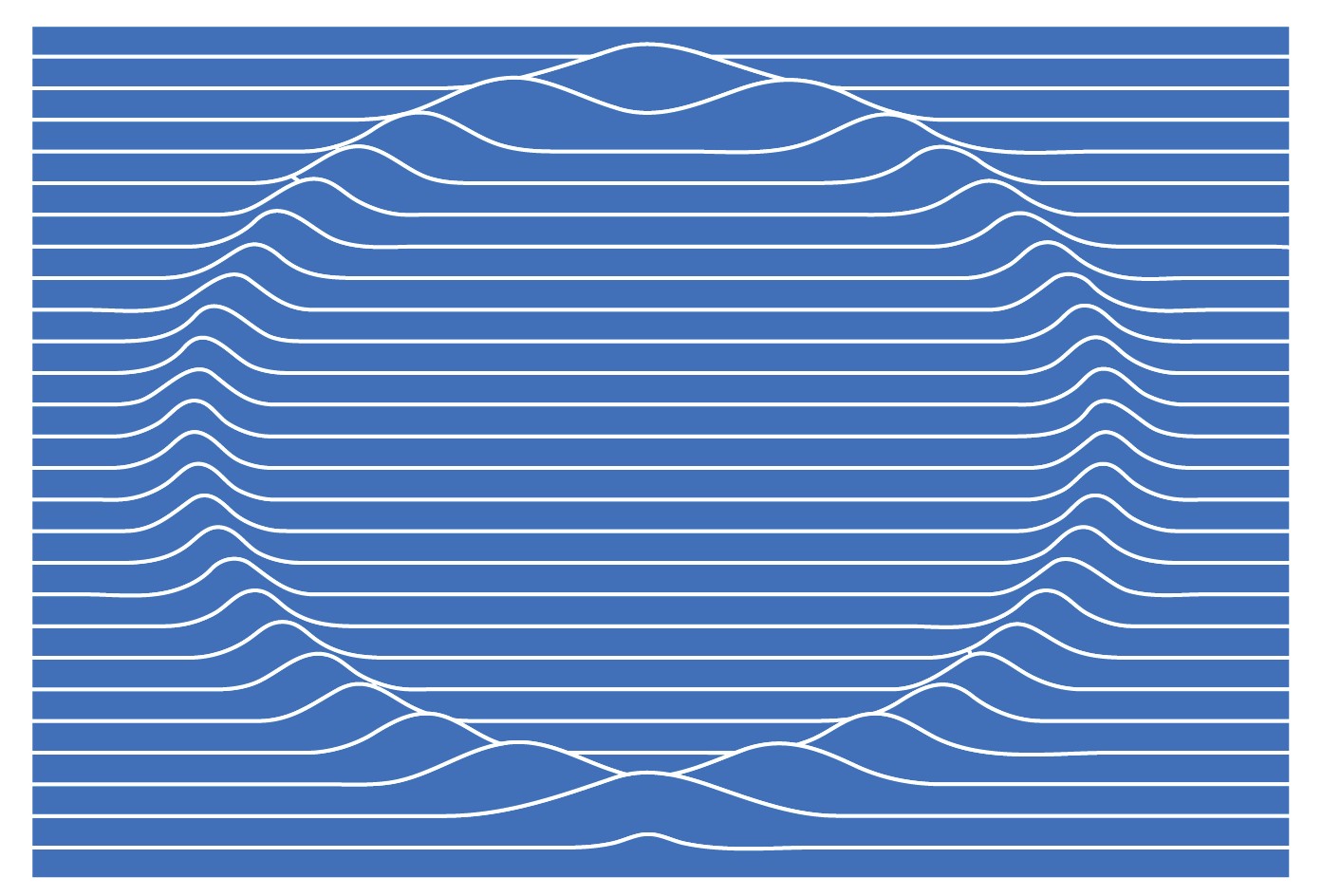 A slight shadow makes the 3D appearance stronger. It can be made easily by drawing a couple of black curves to the wanted shadow areas and blurring the curves. Width tool is used to taper the curves (=half ellipses) to make the shadows end smoothly. Before blurring: 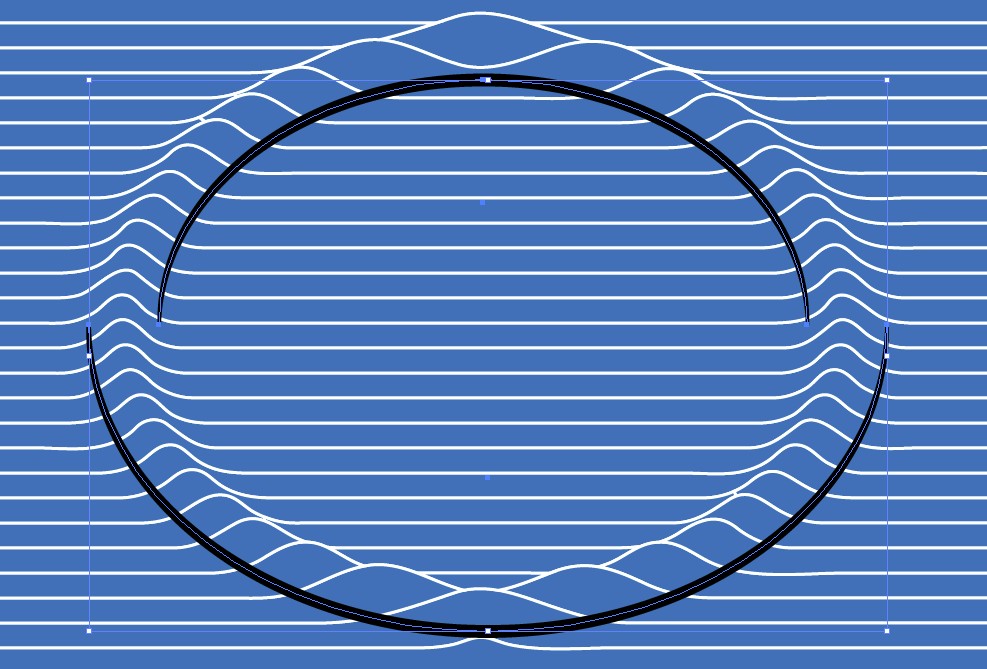 After blurring, reducing the opacity and tweaking the placements: 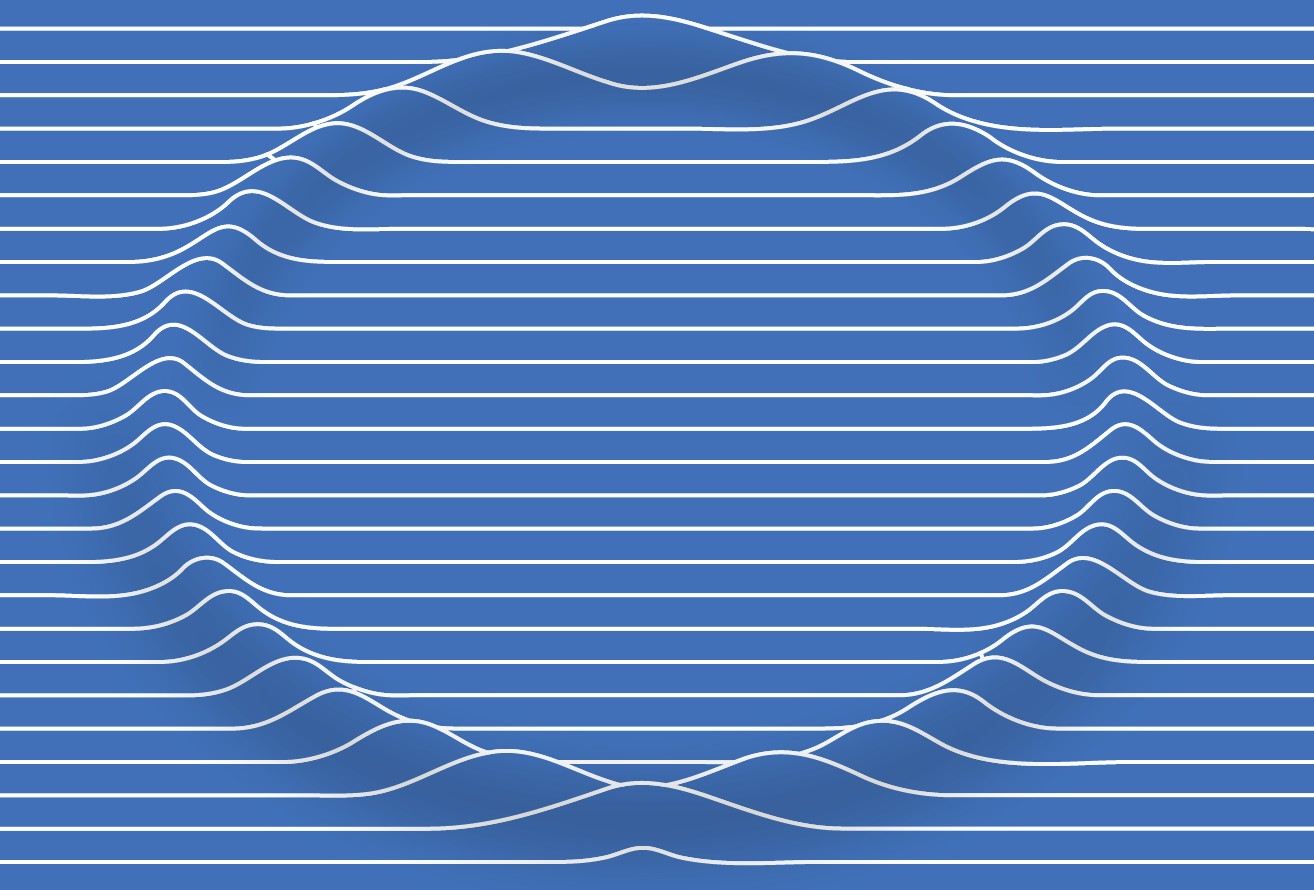 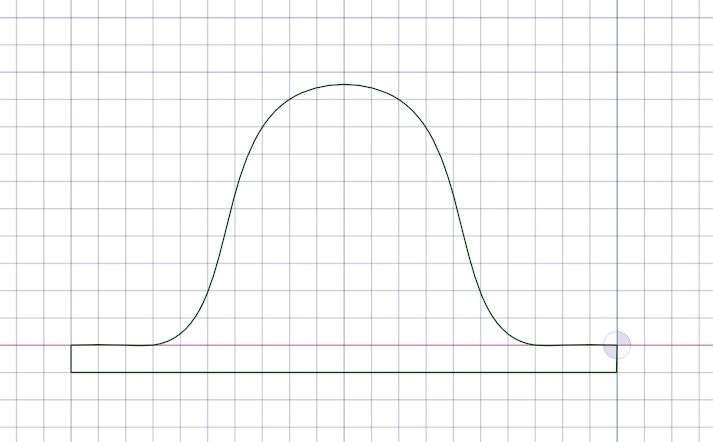 The intended revolution axis is the right edge. 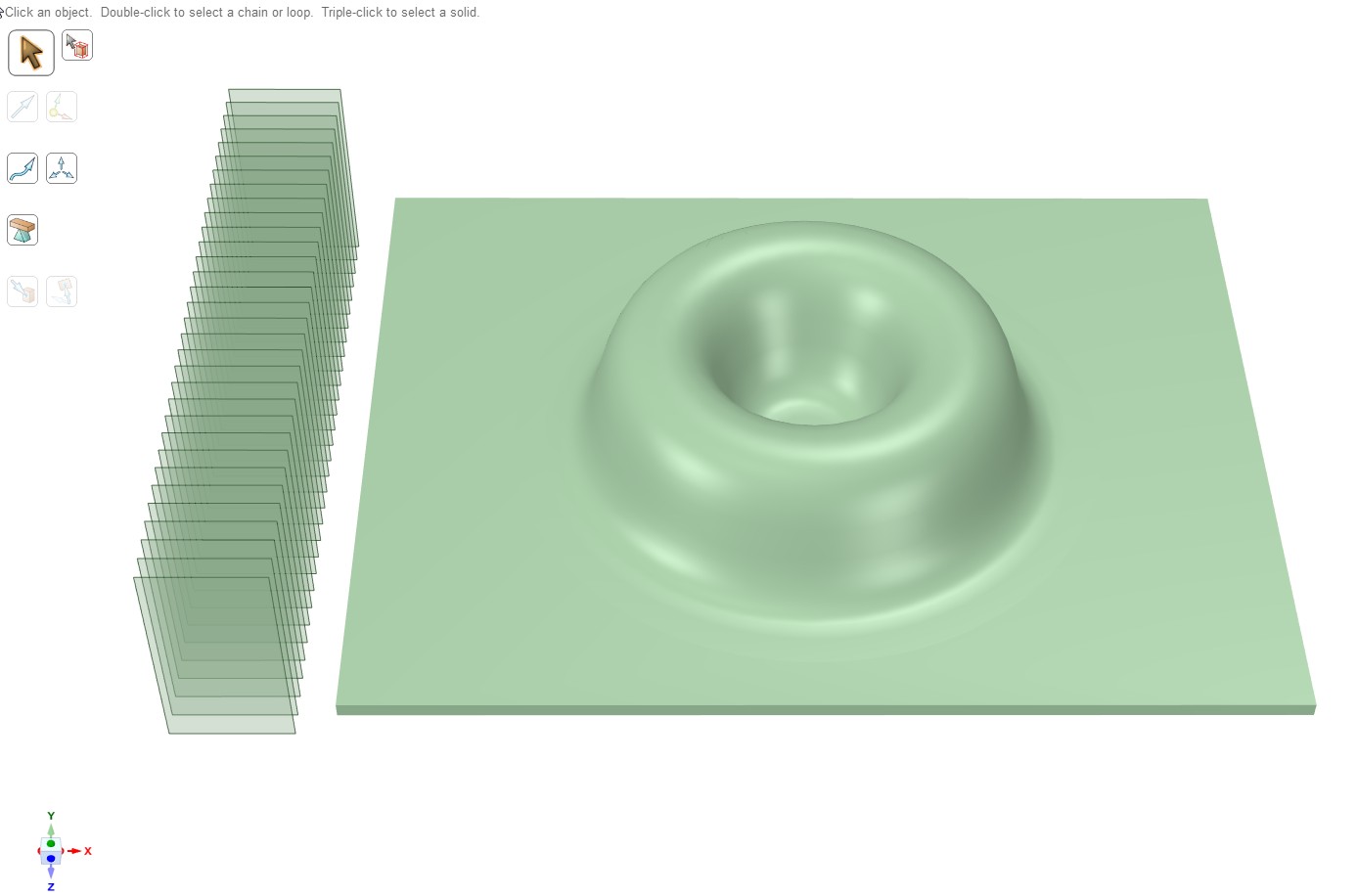 After making the slicing it's a bunch of separate solids: 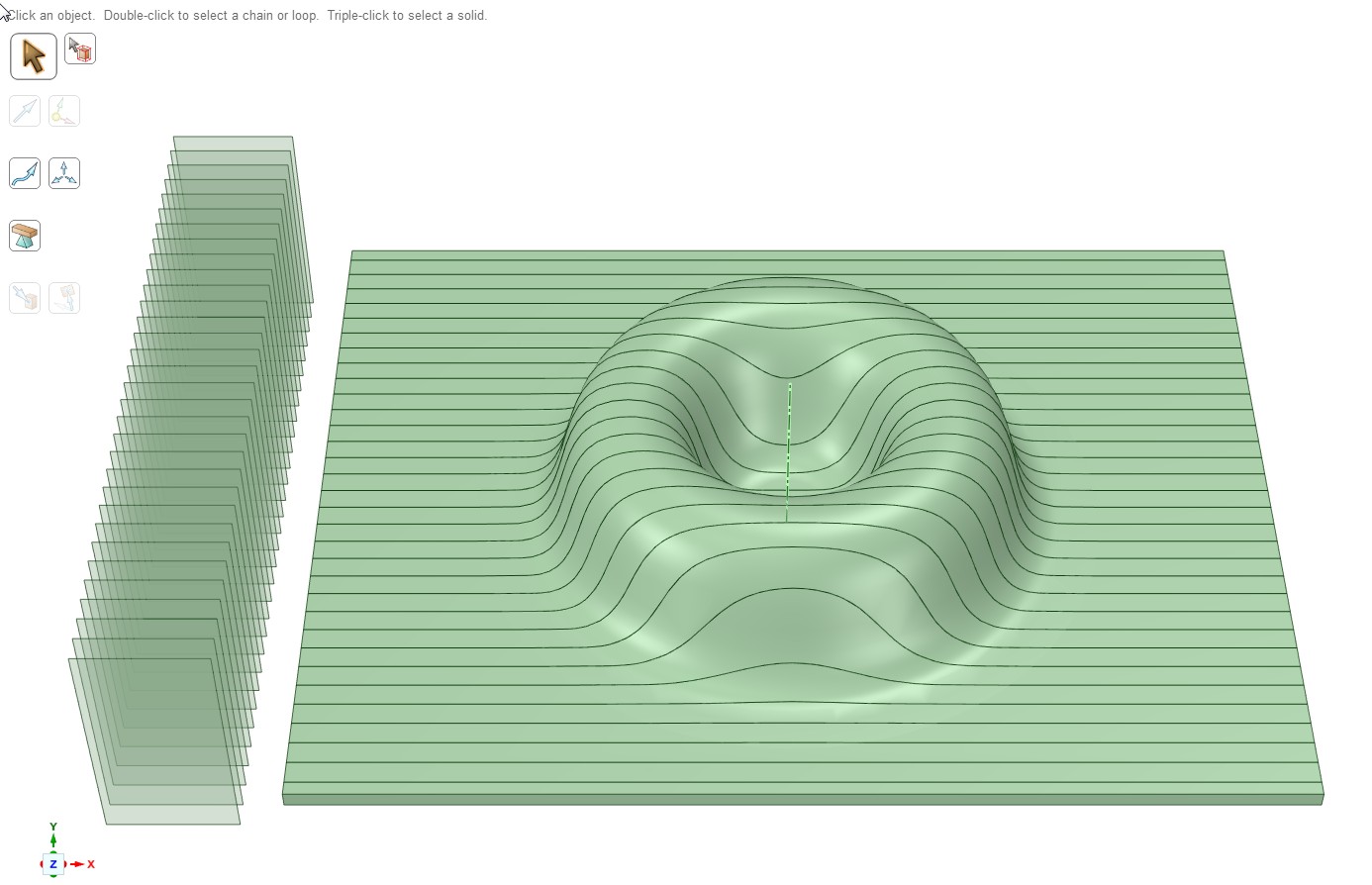 Changing the view to "wireframe without hidden lines" gives this: 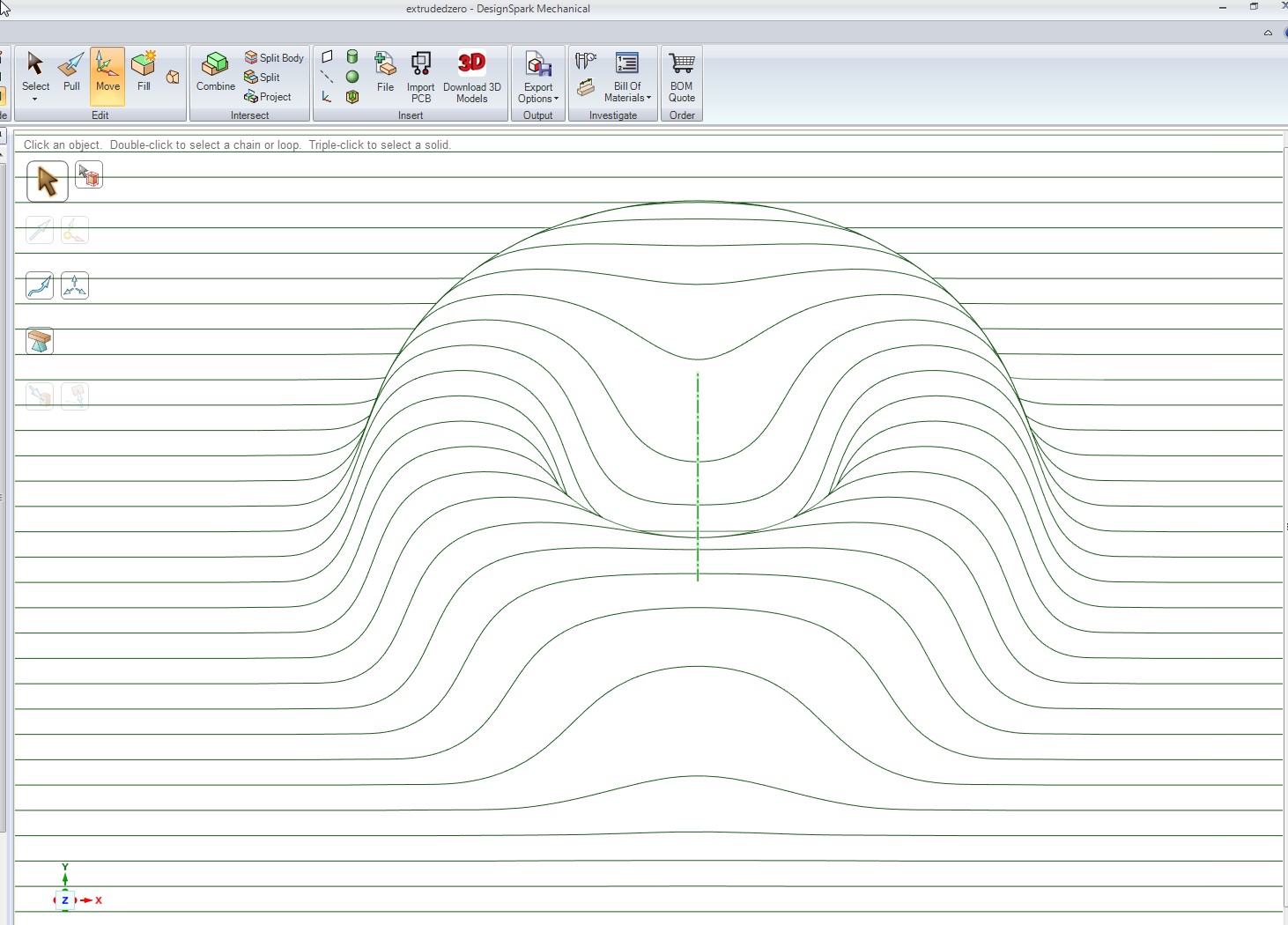 Unfortunately I have a limited freeware CAD program. No usable technical 2D drawings are allowed without getting a high cost paid version. Thus proper coloring and high resolution rendering are disabled as well as exports and imports in common 2D vector and 3D CAD file formats.

But the wireframe view can be printed as PDF. Illustrator opens it. In Illustrator, after removing numerous clipping masks and groupings, I could set white stroke color and place a blue rectangle to the background: 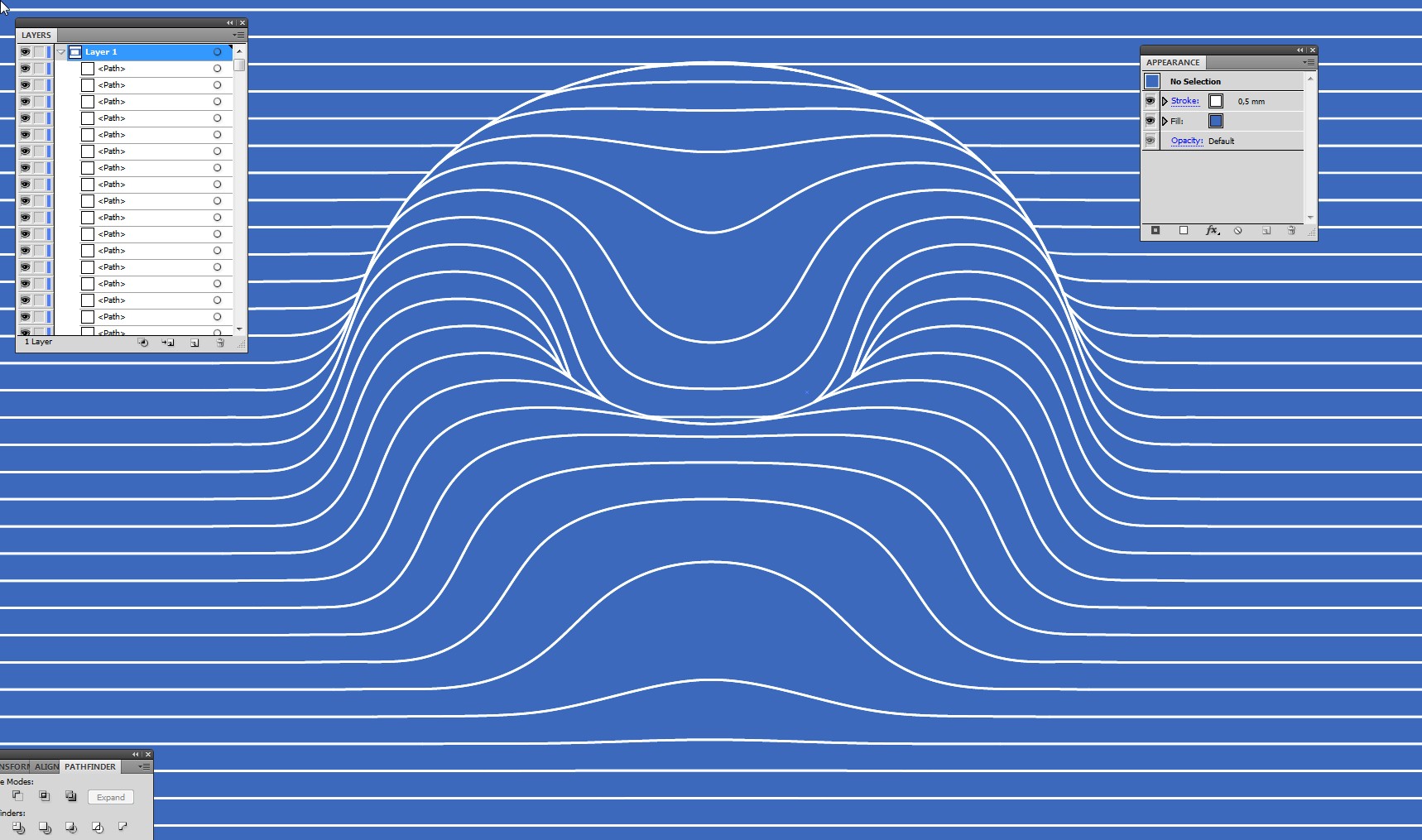 It still needs the shading.

One method more. Actually this was suggested by another user at first, but he got a bad comment and deleted his answer. I tried to reopen it, but with no result. So, it's now here.

Programmer HARDIK LAKHALANI has written a pair of scripts which do the job in Photoshop and Illustrator. Both programs are needed. The scripts are freely available with documentation here full tutorial.

The idea is to create a depth map in Photoshop. To get smooth forms like in questioner's example, one can apply gaussian blur. A screenshot of a depth map from the tutorial video: 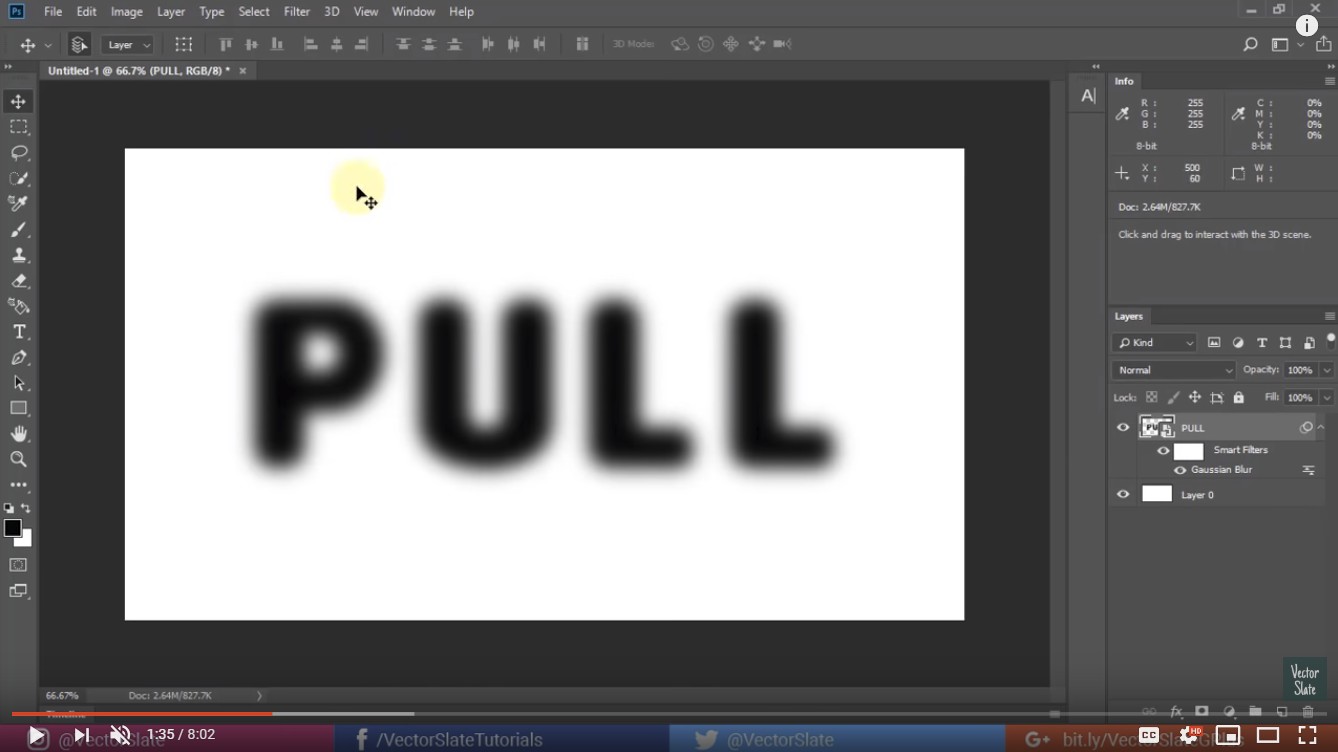 This illustration was done by Juan Carlos Pagan, a fairly well known and talented typographer and 3D modeler - given the subtle shadowing visible in some of the letterforms, and the way that each nearer "vectorline" obscures the one behind it, having a very slight black outline, I suspect it's actually one of his simple-looking but actually 3D letter form explorations.

Why don't you ask the artist directly? I'd love to know... 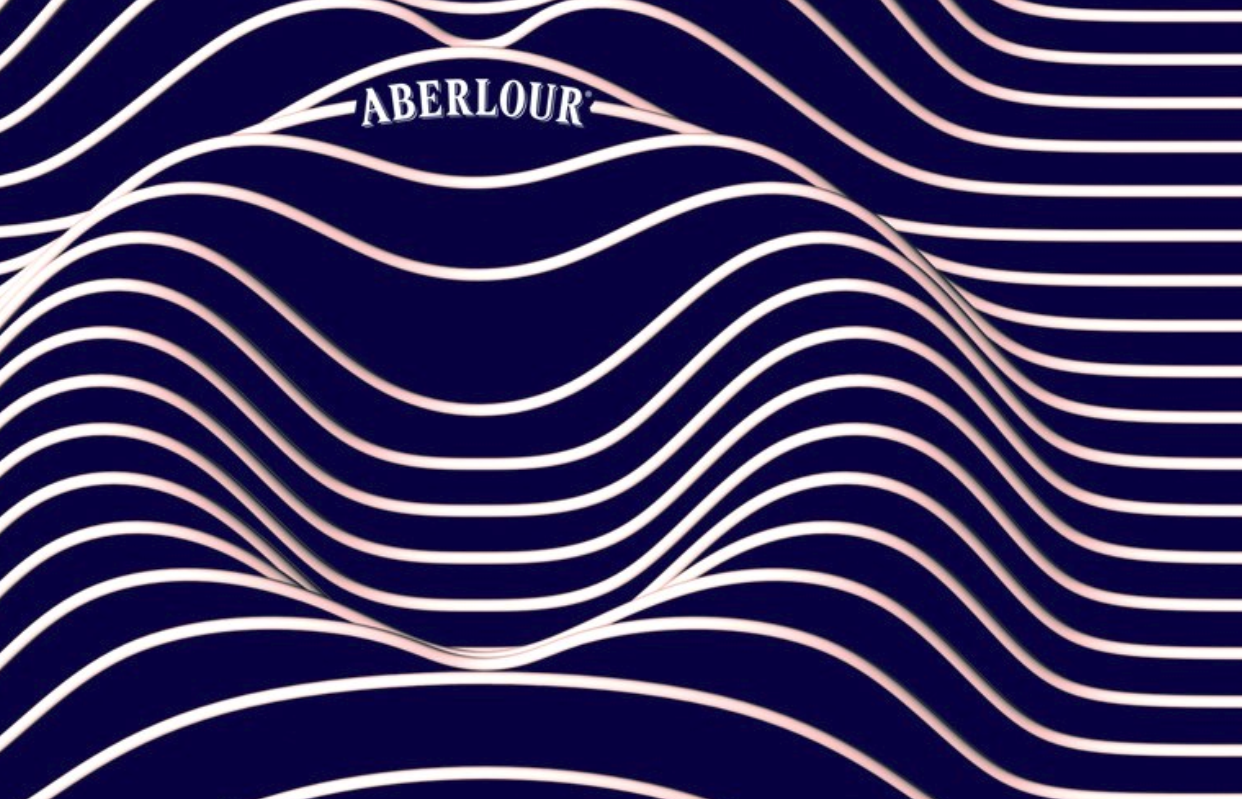 Not the answer you're looking for? Browse other questions tagged adobe-illustrator vector 3d or ask your own question.

10
Preventing Illustrator CC vector objects distorting when scaled
3
Tapered/sloped text effect in Illustrator (NOT skew or perspective)
1
Professional software to replace Geometer's Sketch Pad
0
How do you add weight to strokes in Photoshop? I see the option but no results
3
Trouble with closing pen tool lines in Illustrator for vector illustration
0
How to create a distortion effect in the middle part of a text?
1
How do I tidily join up lines in illustrator?
0
Clipping Mask Questions - Beginner - Adobe Illustrator
0
Adobe Illustrator, dpi, pixels and raster images