Brightness and contrast mapping in photoshop

I wish to map the brightness and contrast of an image into another image.

I have a grayscale photo of a face and an image full of glowing particles. I want to embed the face photo to the particle image so that together they look like the face is made of those particles.

This is an example of the wanted result:

The face photo I wish to use is a front view.

All simple layering attempts fail, the result is only a face photo and particles combined to the same image, but they still are a separate face and particles. How the embedding should be done so that the result is like the face is made of glowing particles?

Your example is a textured 3D model or someone who has respectable 2D graphic software skills has warped an image to look out like it's a 3D model.

You already have got an answer which shows how to modulate the brightness of a cloud of dots with a photo of a face. If the face image has deep contrasts and the dot cloud has irregular distribution, some 3D -like effect really can be seen altough closer look reveals that the dots still are in the same plane. Careful warping could fix it, but it's not easy. I skip it and suggest something else:

There's a totally different way to build the face like it's made of glowing dots. All dots are as bright, but their density varies along the local brightness of the face image. That's called halftoning. It's used in printing and in many drawing and engraving styles to simulate grayshades.

Photoshop has several high quality halftoning methods. One of them is Diffuse Dithering. To use it the photo must at first be converted to grayscale.

A good contrast is generally a must to avoid grey or washed appearance. Just in your case high contrast is bad because you want to keep white dots separated, large contiguous white areas are not wanted. Here's the original BW photo and and the low contrast grayscale version (it was desaturated RGB image, but the mode is changed to grayscale): 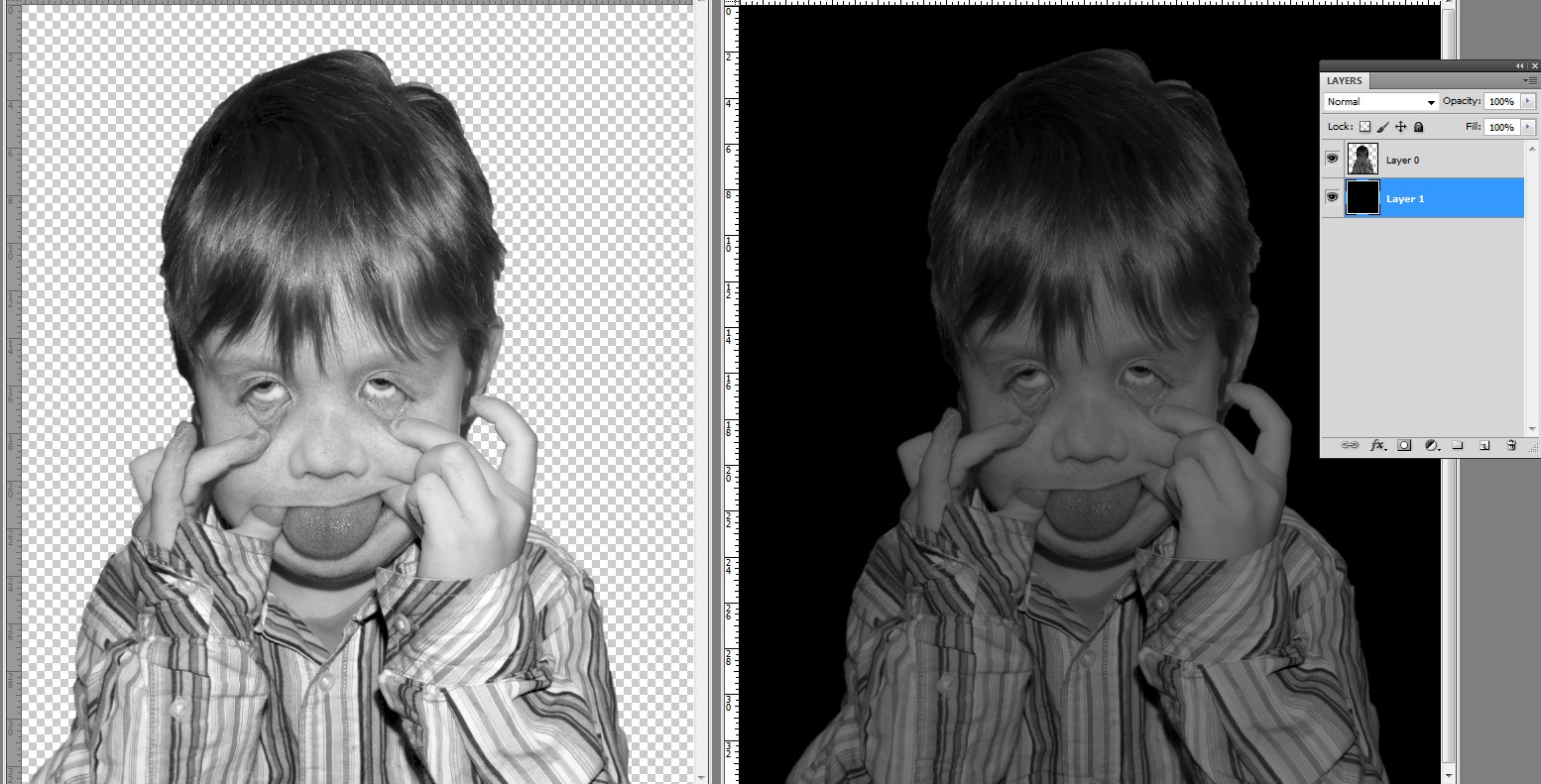 The low contrast version has got full black background and it's max. brightness is about 40% of full white.

After applying Image > Mode > Bitmap > Diffuse dithering the result is this: 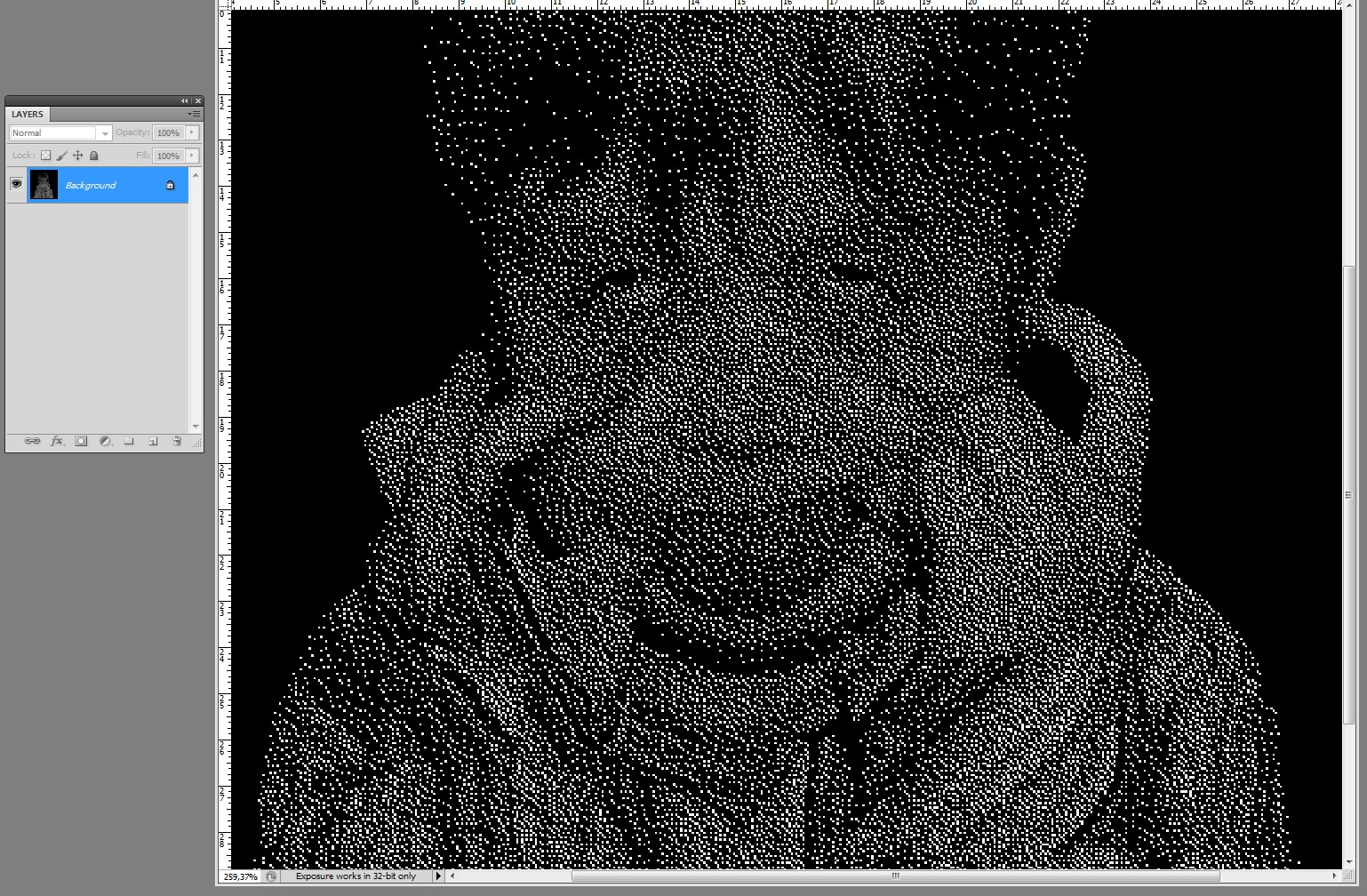 It looks out grey, but the dots are full white on black. Zoom in to see it.

You wanted glow. If it's colored, it will not melt white dots together, the image is still made of dots and looks out substantially less grey: 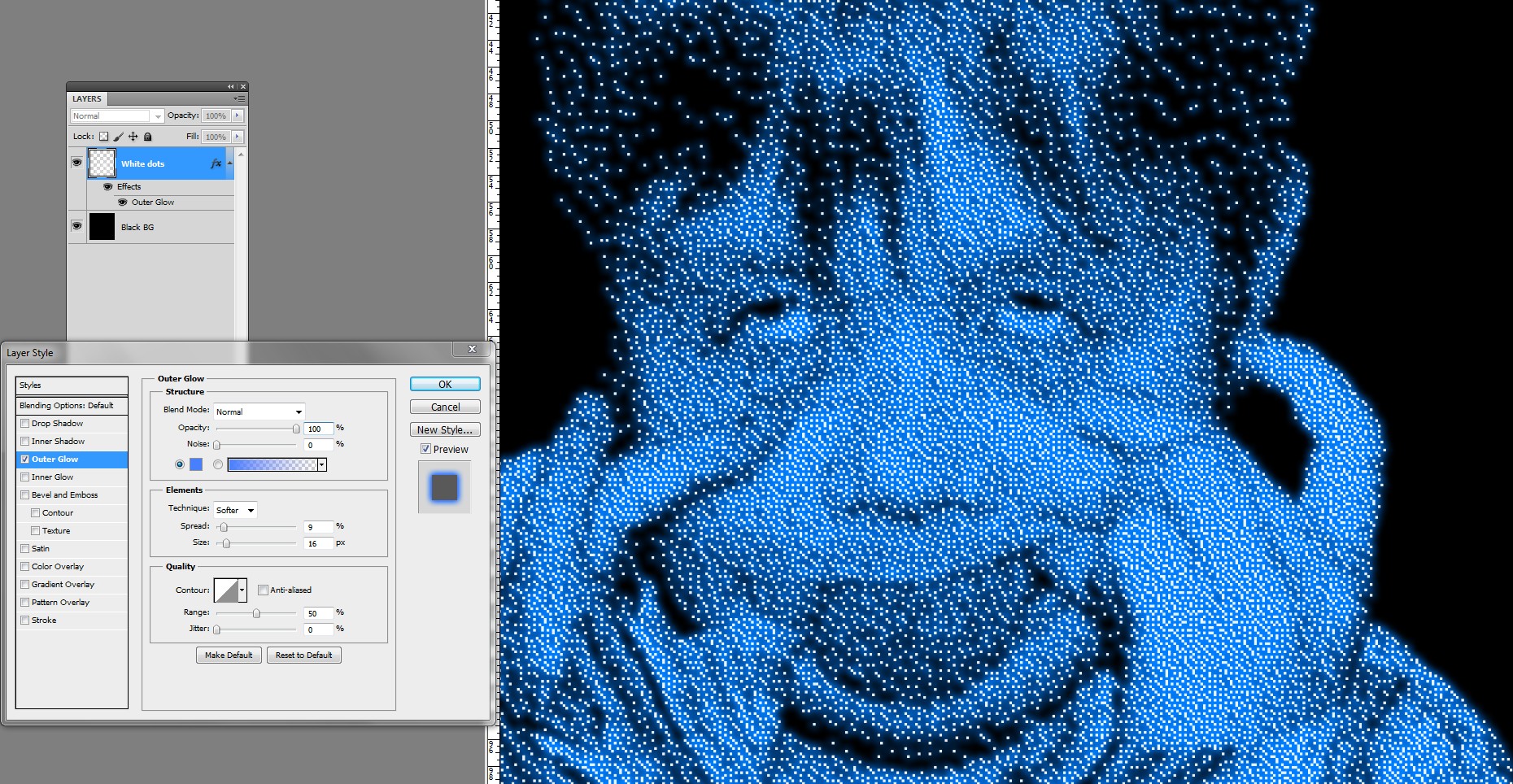 If I understand your goal correctly, it's simple. Just copy your face layer and paste it into the particle layer's mask, then invert the mask. 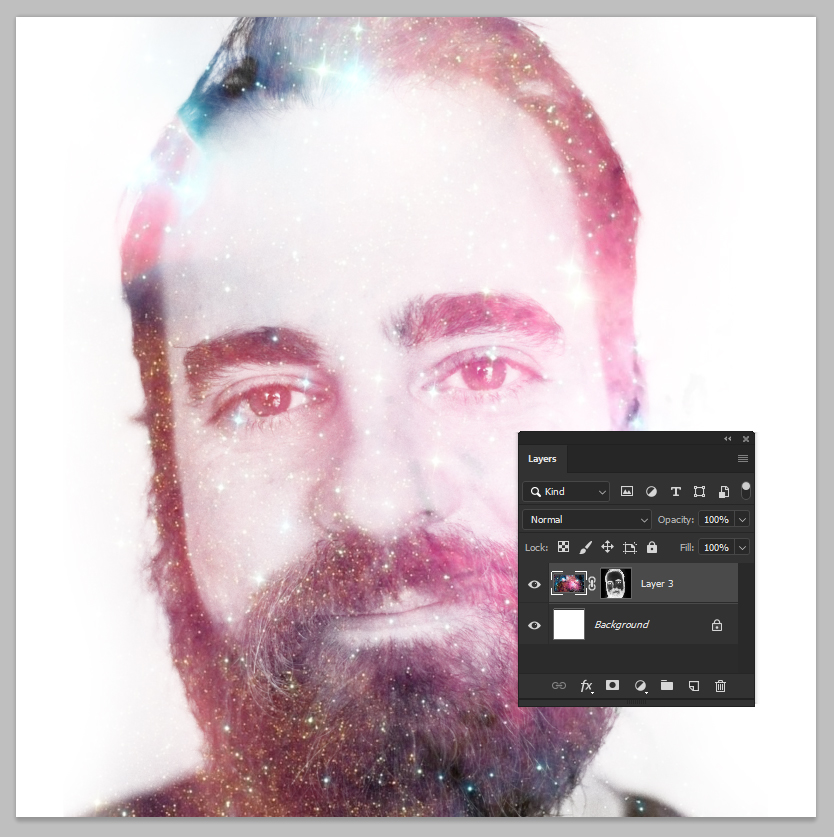 Here is the mask without inverting: 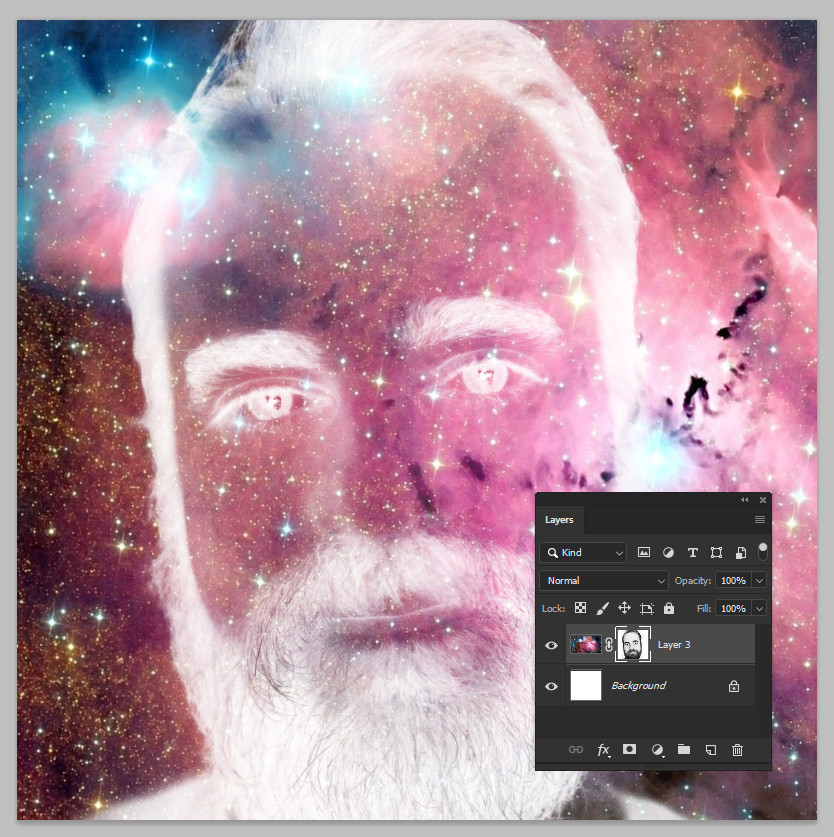 Here is the image with no masking. The face layer is set to "multiply" over the star background. 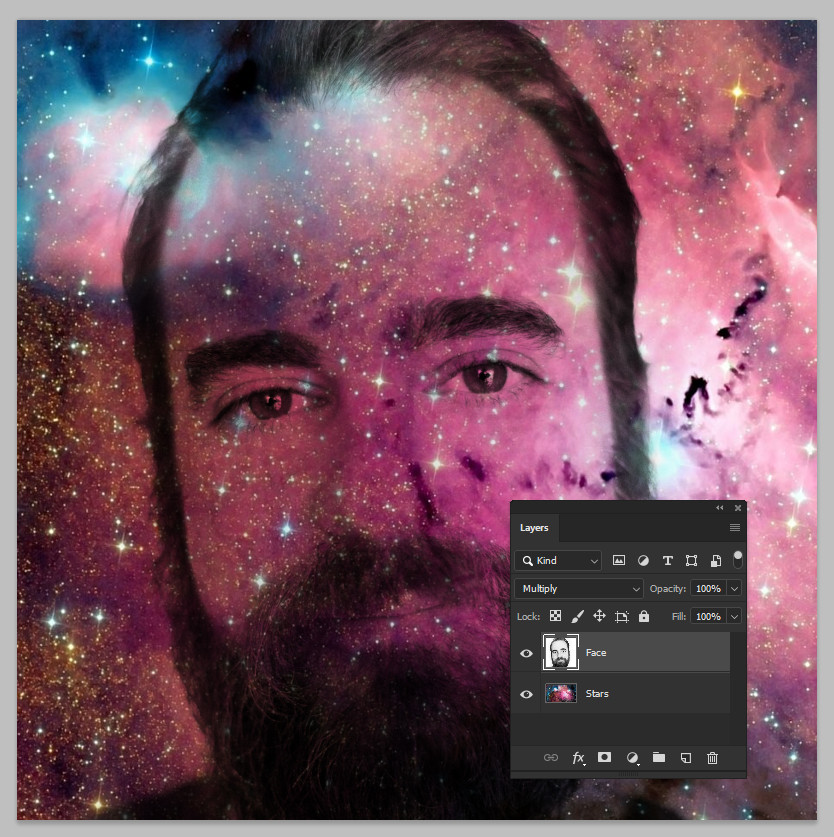 You can try adding an exposure adjustment layer with a mask. Then copy that to get more contrast. For best result you probably need a photo with good contrast between shadows and highlights. 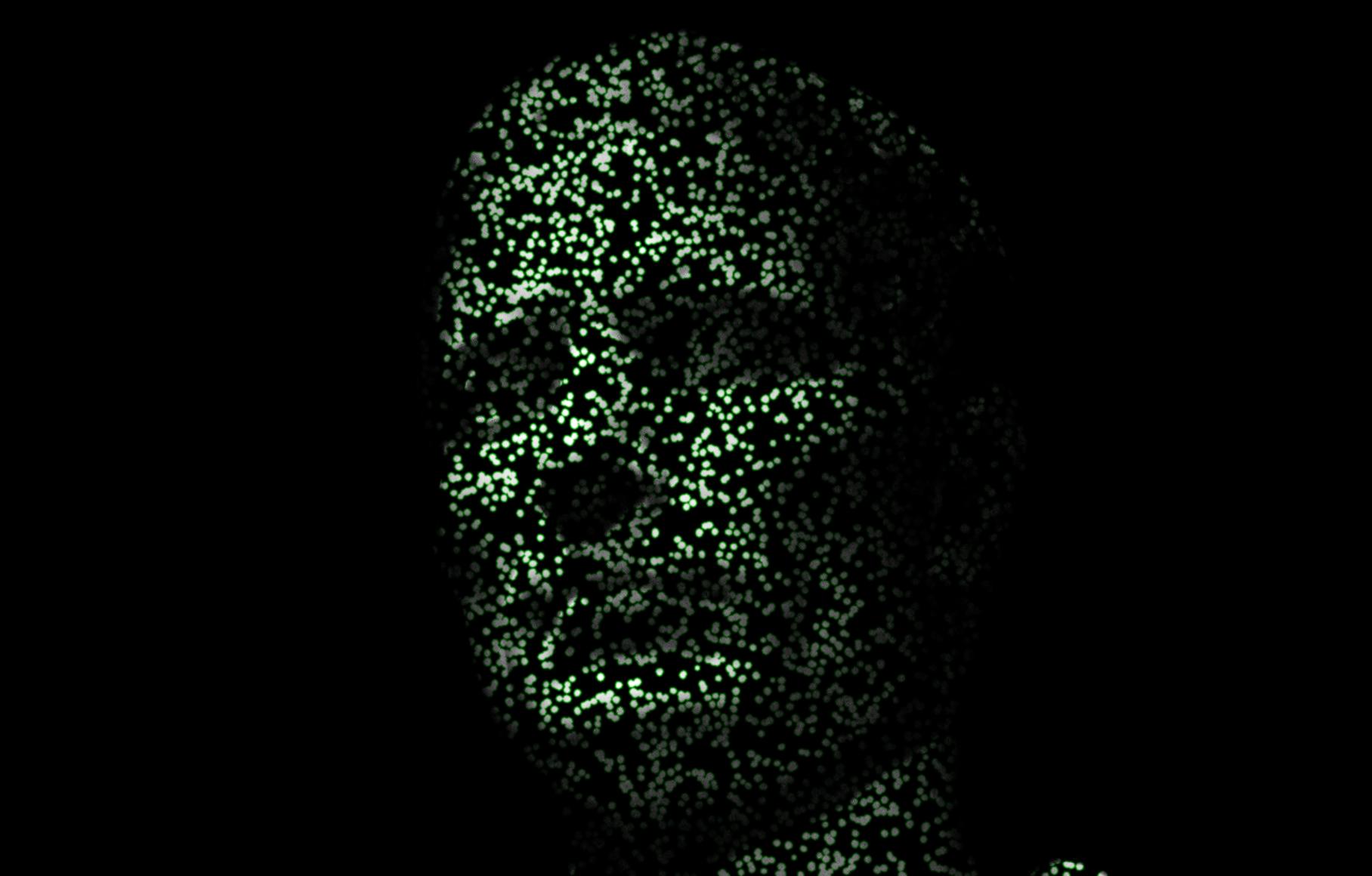 I added a Color balance adjustment but that is not necessary.

Not the answer you're looking for? Browse other questions tagged adobe-photoshop transparency photo-editing or ask your own question.

3
How can I achieve this stamp / photocopy effect?
8
How do I fix this photo (poor quality, saturation, color) in GIMP?
4
Even brightness in texture
5
Best Grayscale method for checking contrast?
0
colors change when copying and pasting from image to new photoshop document
0
Matching color, brightness and contrast of multiple images
2
Replace specific range of color in Photoshop with a flat color
1
Multiple Panorama Automation in Photoshop
2
Patterning face with a straight line brick-like pattern