How do I export a crisp icon from Illustrator?

I have created an icon in Illustrator that I would like to use as an emoji on Discord and Twitch. I exported it as a 2031 × 2002 image and uploaded it to Discord.

When I use the emote on Discord (top pic) it gets resized automatically to 32x32, and it looks nice and crisp. Twitch, however, asks for the image to be uploaded at the specified resolution (28x28) rather than doing the resizing itself.

If I use Illustrator to export for web at 32x32 resolution, or if I try to resize the image in GIMP, it results in the bottom image.

Edit: The top image, when I save it, has an original resolution of 128x128px. However, it is definitely being downscaled to 32x32 when it is being displayed in Discord (the white box is a 32x32 image in GIMP for scale).

So what I don't understand is how does it look good when the 128x128 image is downscaled to 32x32 on screen, vs having a 32x32 image to begin with, and is it possible to achieve this effect with a native 32x32 png? I am a photo/image/editing novice, so this might be something very obvious that I'm missing!

In Illustrator, I guess the best solution is to reduce the icon size from 2031 × 2002 to the needed sizes 28 × 28 and 32 × 32 and instead of exporting for web, use the Asset Export Panel and export it as 1x .png. 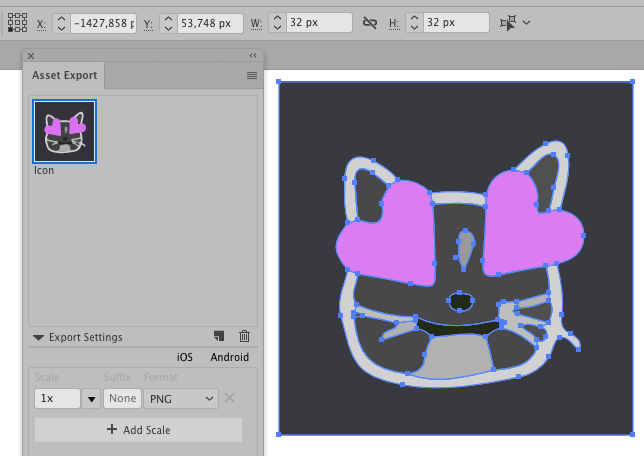 This is the 32x32px.png result made from your top image traced:

Not the answer you're looking for? Browse other questions tagged adobe-illustrator adobe-photoshop gimp icon or ask your own question.

0
Export Resolution in Adobe Illustrator
1
Gimp, OSX: PNG file seem to be saved without the alpha channel
1
Illustrator: Removing white borders from boxes after Create Object Map
0
Exporting colour image from GIMP turns grey
0
Logo in Illustrator to Photoshop for High-PPI Export
2
How do I work with an image in Illustrator and save it back as an image?