I have been having a mare trying to replicate fluorescent orange in Photoshop.

No matter what I try, like altering the hue, saturation, vibrancy etc. I cannot create a fluorescent orange in Photoshop, like Pantone 804 C sort of colour. The orange just comes across rather dull rather than fluorescent.

See below for illustration: 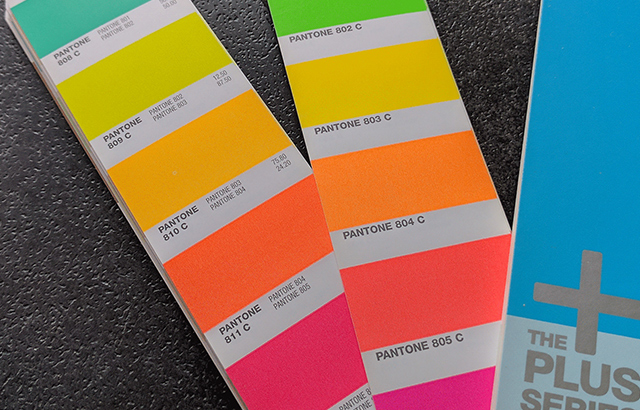 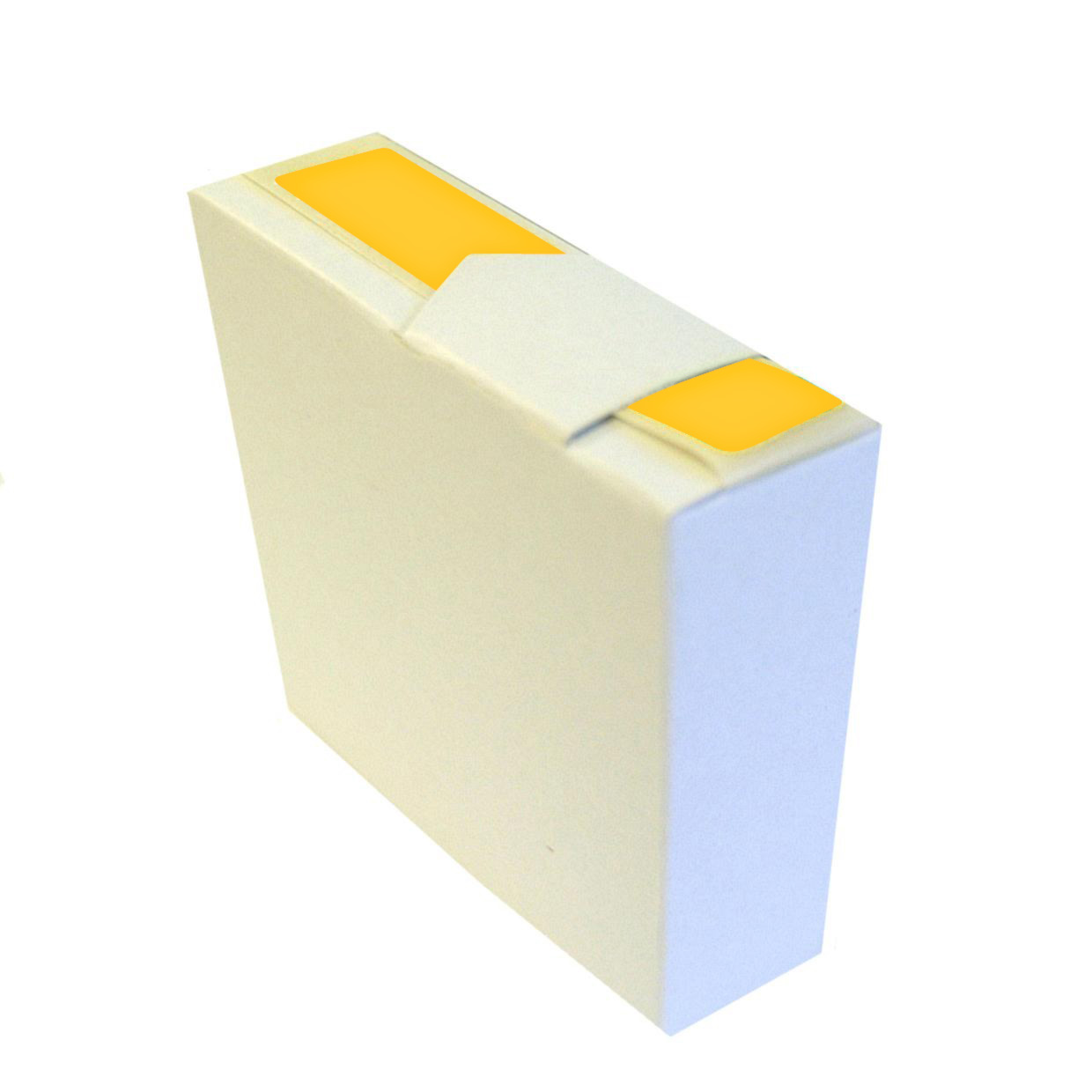 Is there a way I can achieve this? or is fluorescent colours not a possibility? 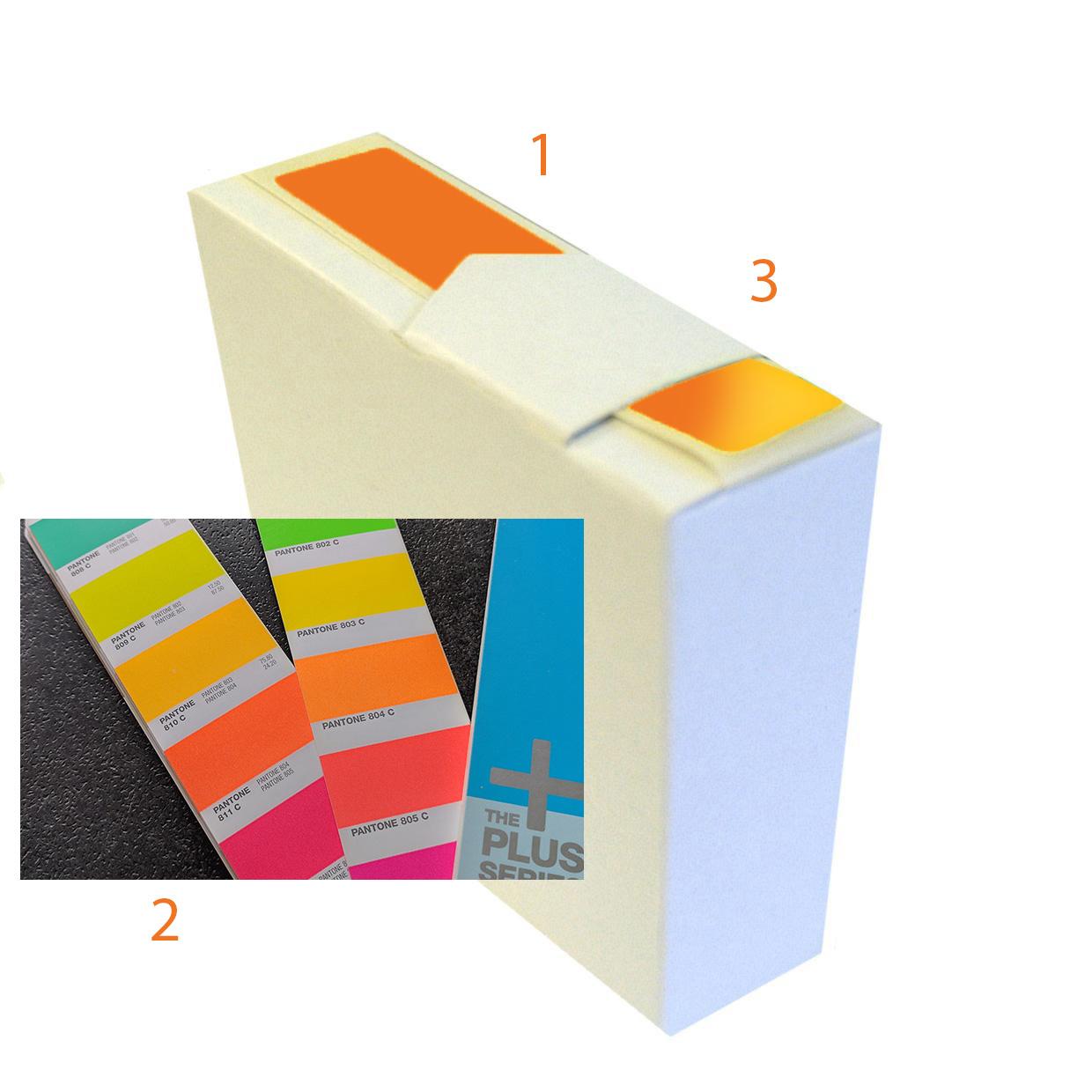 There is potentially one problem you are facing...

A fluorescent color looks more "vivid" on a dark background. This image has a white background...

This is about perception, it is a psychological thing, not a technical limitation of Ps or any computer.

Paint a dark background and your color will be more "vivid". 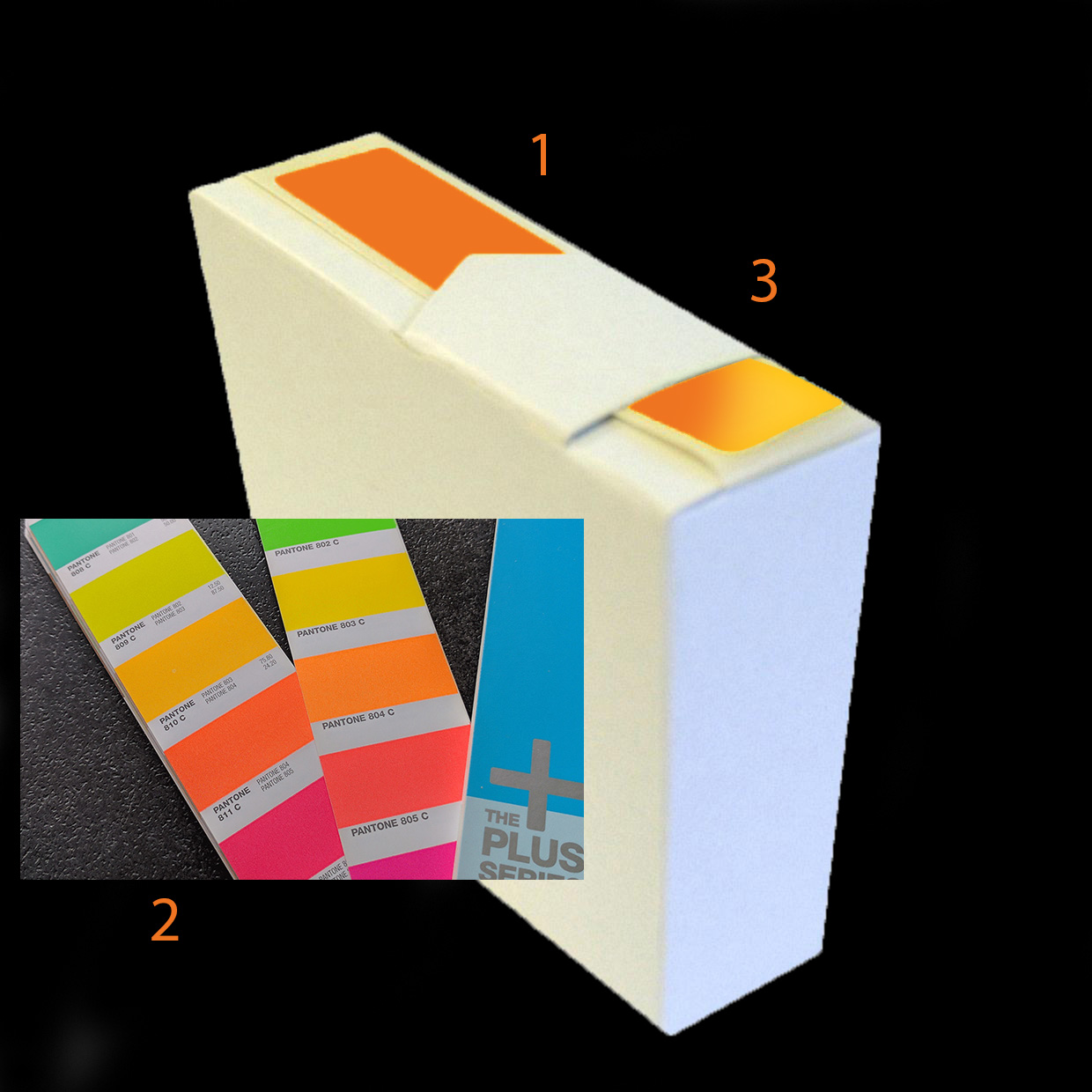 Here I darkened the box itself. The orange is the exact same on all 3 images. 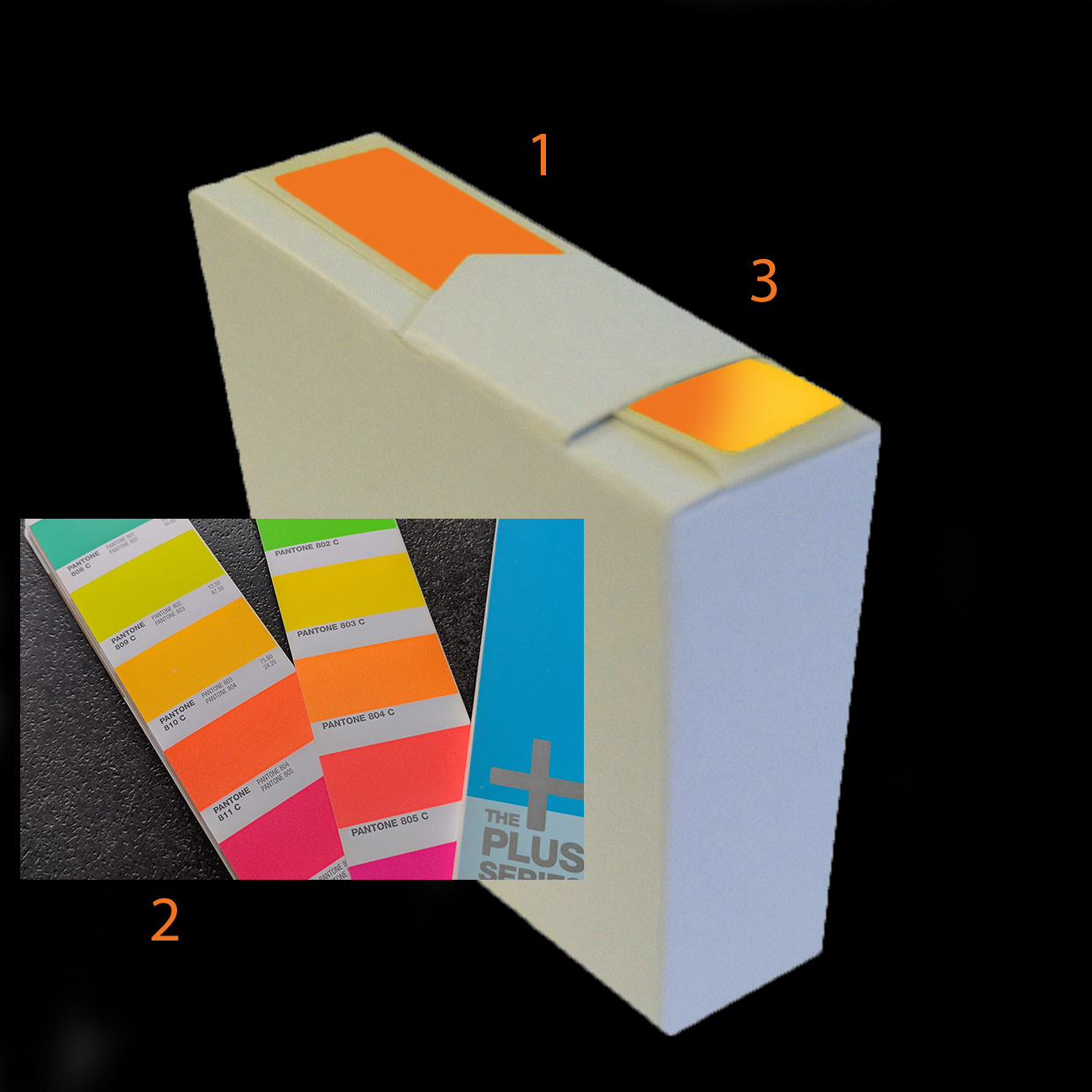 Note the difference, especially between image 2 and 3 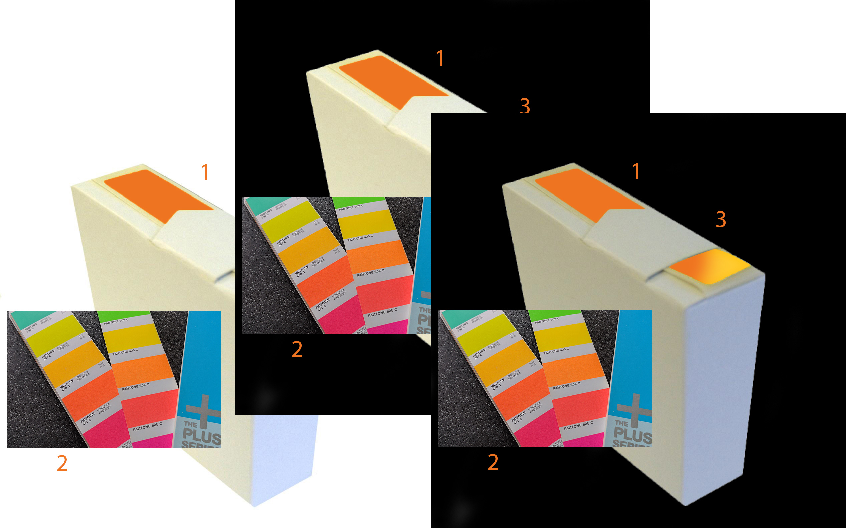 As suggested by Joojaa, increase the chromatic contrast. I am removing the yellow cast from the box making it bluer, so the complementary color, the orange, looks more orange. 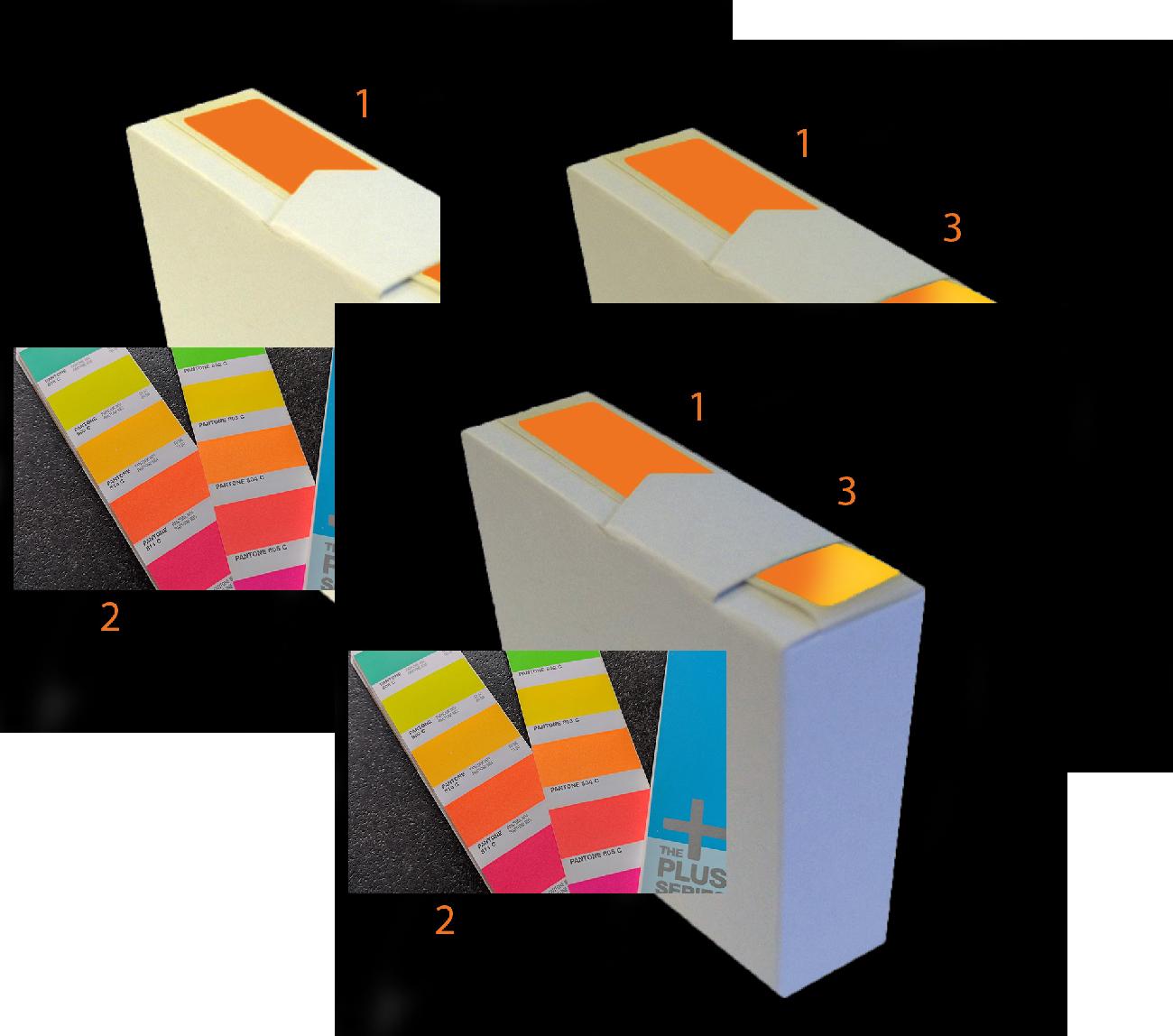 I must say, that the sampled orange can still be a heck more vivid. I am just using it as an example of why you did not achieve a fluorescent look.

I approached this super-quickly in Affinity Photo (my choice - in this case the application used is of no consequence to the matter in question) and got decent results which confirm the consensus of responses.

These first two were from colour-sampling from our reference image of the pantone fan, and if you compare the results it clearly supports Rafael's contention that the dark/light background has a huge impact.

Light background - almost no "pop" due to lower chromatic contrast: 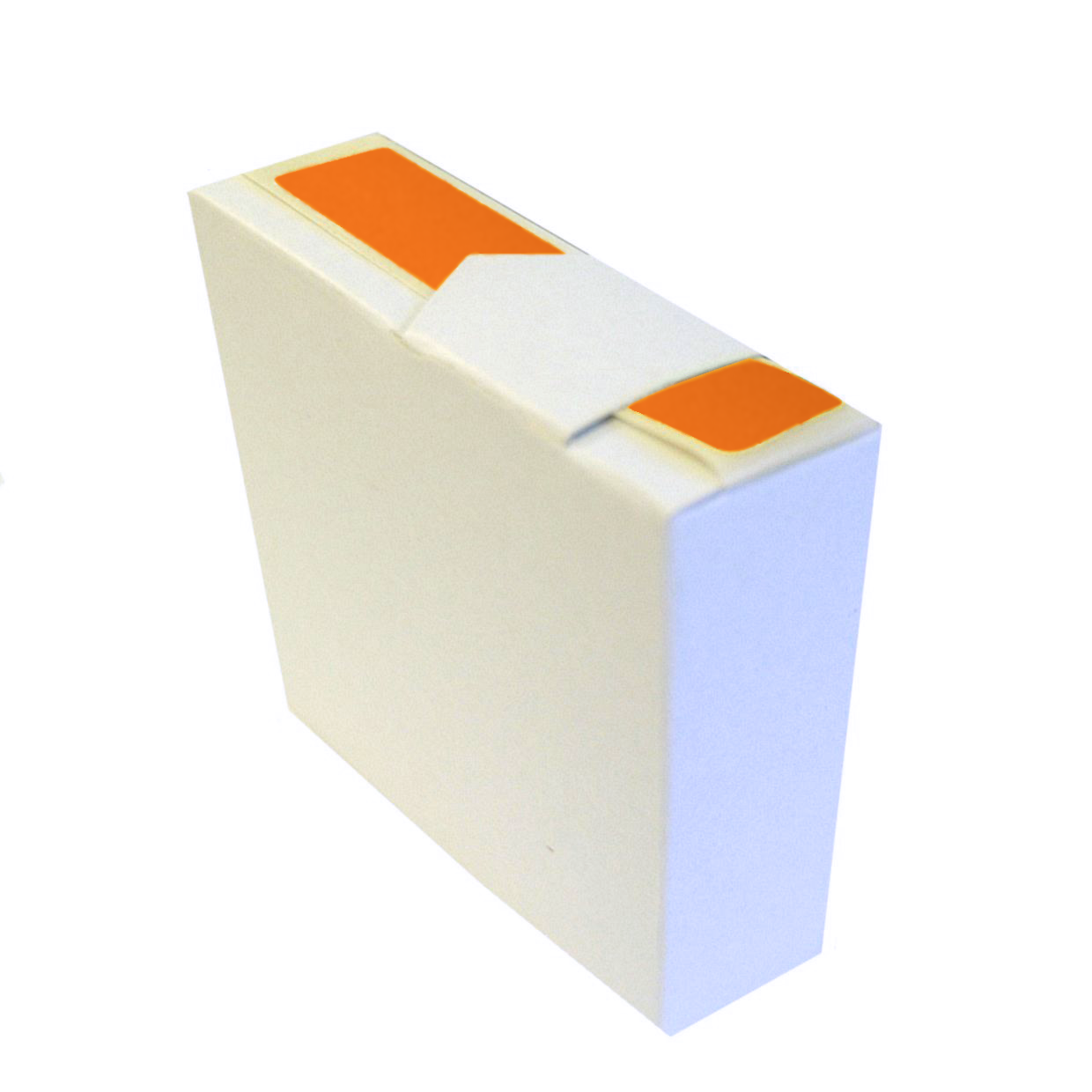 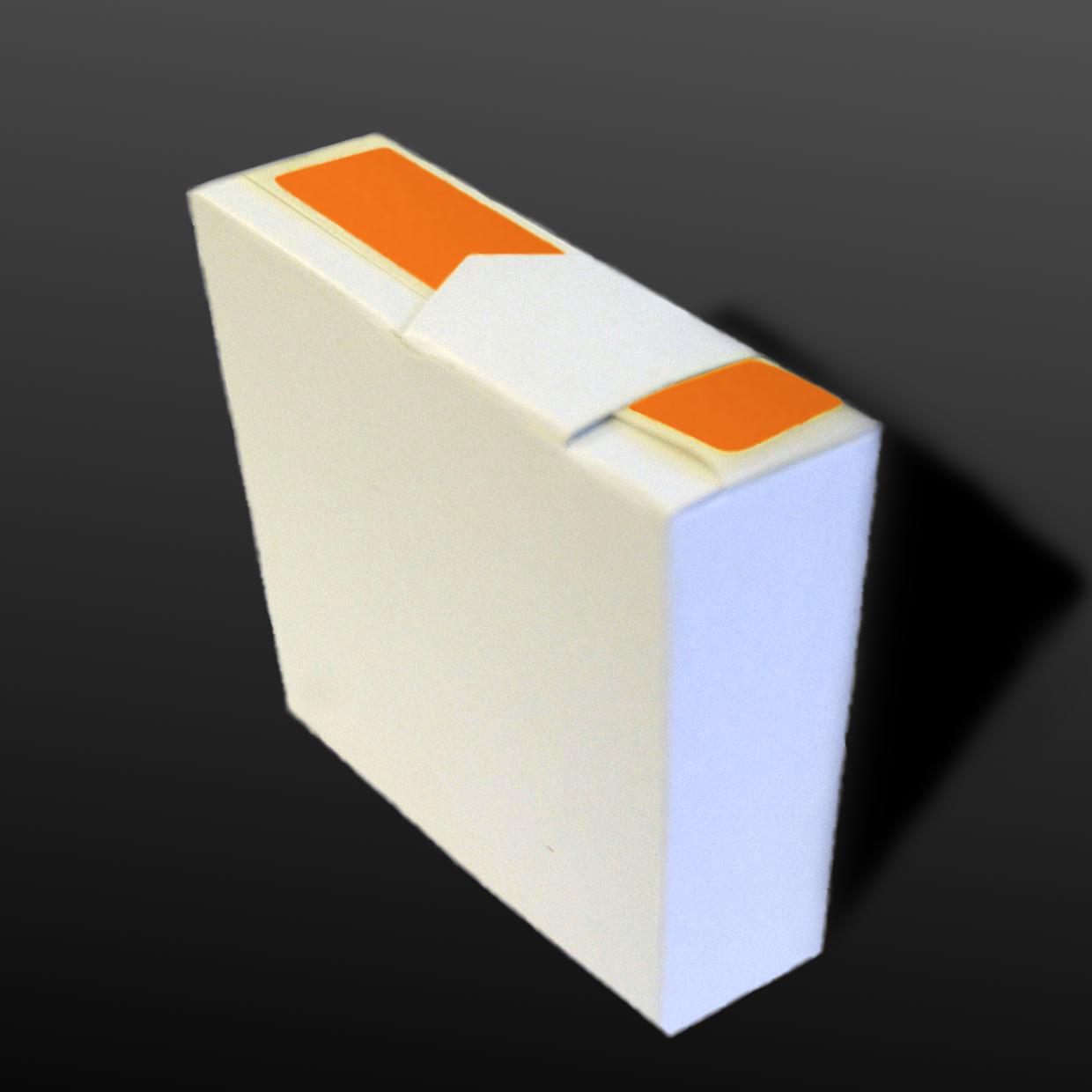 Just for completeness, this last is using the official Pantone swatch for Pastels & Neons 804C 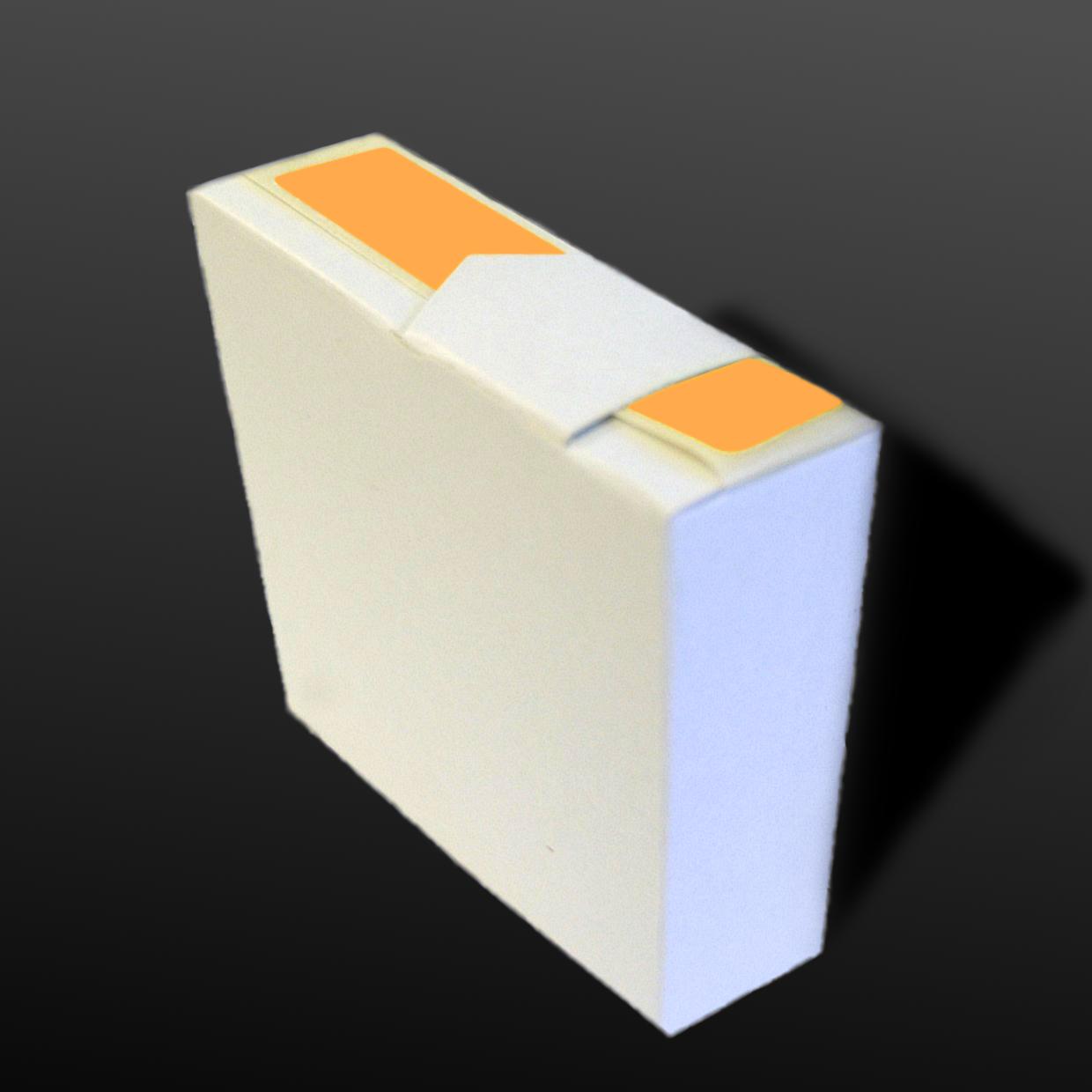 As is abundantly clear, no post-processing effect can imitate the real-world aspect of a "fluorescent" ink, an d though you can come closer with a super-high contrast composition, it will still fall short of emulation.

Inks generally look darker than the ambient (hopefully white) light because most inks generate the color effect by reflecting different wavelengths differently. For ex. blue ink reflects much more around 0,5 micrometers than around 0,7 micrometers. But reflected radiation energy is less than the amount of energy which comes as ambient light onto a painted surface, so colored surface looks dimmer than 100% reflecting pure white.

Fluorescent color materials can behave in even more complex way. They can store light energy into long living electron excitation states in bright ambient light conditions and emit it in a certain wavelength during a long time. That makes possible items which look self-illuminating when watched in low ambient light.

You cannot print with ordinary CMYK inks anything which looks fluorescent, because CMYK inks do not make the needed wavelength conversion. You need fluorescent ink. I have never seen them for sale in general stores. I'm afraid printers which can handle them are also kept out of the shelves in stores which aim to sell things to ordinary consumers.

On RGB screen the effect can be simulated. Let the white areas be grey enough and and let all other colors be darker than the one which should look fluorescent. Let it have maximum brightness and saturation.

Someone can claim that it looks like there's a lamp inside the fluorescent looking area. But that's what also real fluorescent inks do. They radiate a certain wavelength or few wavelengths by reusing the radiation energy that the fluorescent material has absorbed.

Not the answer you're looking for? Browse other questions tagged adobe-photoshop color cs4 or ask your own question.

10
Color Theory: Is there a measurement of "colorfulness"?
1
Can I use Solid Fill or Gradient Like Smart Objects
4
How can I create a mosaic with my own tessellating tile shape?
3
Replicate Color Overlay
4
Photoshop: change colour of animal fur
1
How do I change ONE colour of a placed image in Illustrator?
0
Changing to CMYK Color Mode Negatively Changes Texture Color That Was Made With Photoshop Colorize Tool
2
How can I adjust these background colors so they are the same?