Sometimes when I'm working on a piece, I'll use multiple resource intensive patterns & effects like Transforms, 3D revolves, etc. to the point where the document becomes slow and unstable. Then i'll try to expand things as much as possible to reduce them to their simplest forms, like basic strokes and paths, and I'll use clipping masks to put textures and patterns on the actual objects that make up the basic structure of the image, like their wearing a skin. Problem is it seems the complex objects objects are still consuming system resources even after expanding them, because the effects can still be adjusted and handles/anchors from before the clipping mask are still showing up in empty space. I think what I'm trying to do is what is referred to as flattening and/or consolidating in other softwares like Inkscape. How can I do that with Illustrator?

Sometimes I can get it to work if I'm really persistent and try enough combinations of tools like the pathfinder, expand, expand appearance, divide below tools, etc. but it's a hacky process and things never quite go the way i want them to when I do it like that.

Okay, so I didn't want to be too specific, I wanted to present the broader issue, rather than a specific image, because otherwise people get distracted and come up with solutions for a single case, that isn't necessarily relevant to all the other cases. So, I'm going to share a story relating to a specific case, but just try to keep it in mind. I mean, If you have a solve for this instance, go on and share it, but my hope is that we can target the root, rather than the symptoms.

Anyway. I play this game with my sister, right; it's like a competition. One of us finds an interesting photograph and we both have to recreate it in our own style, and see who can do it best. She draws it freehand, I construct scalable vector graphics. Here's the current subject (real photo, by the way): 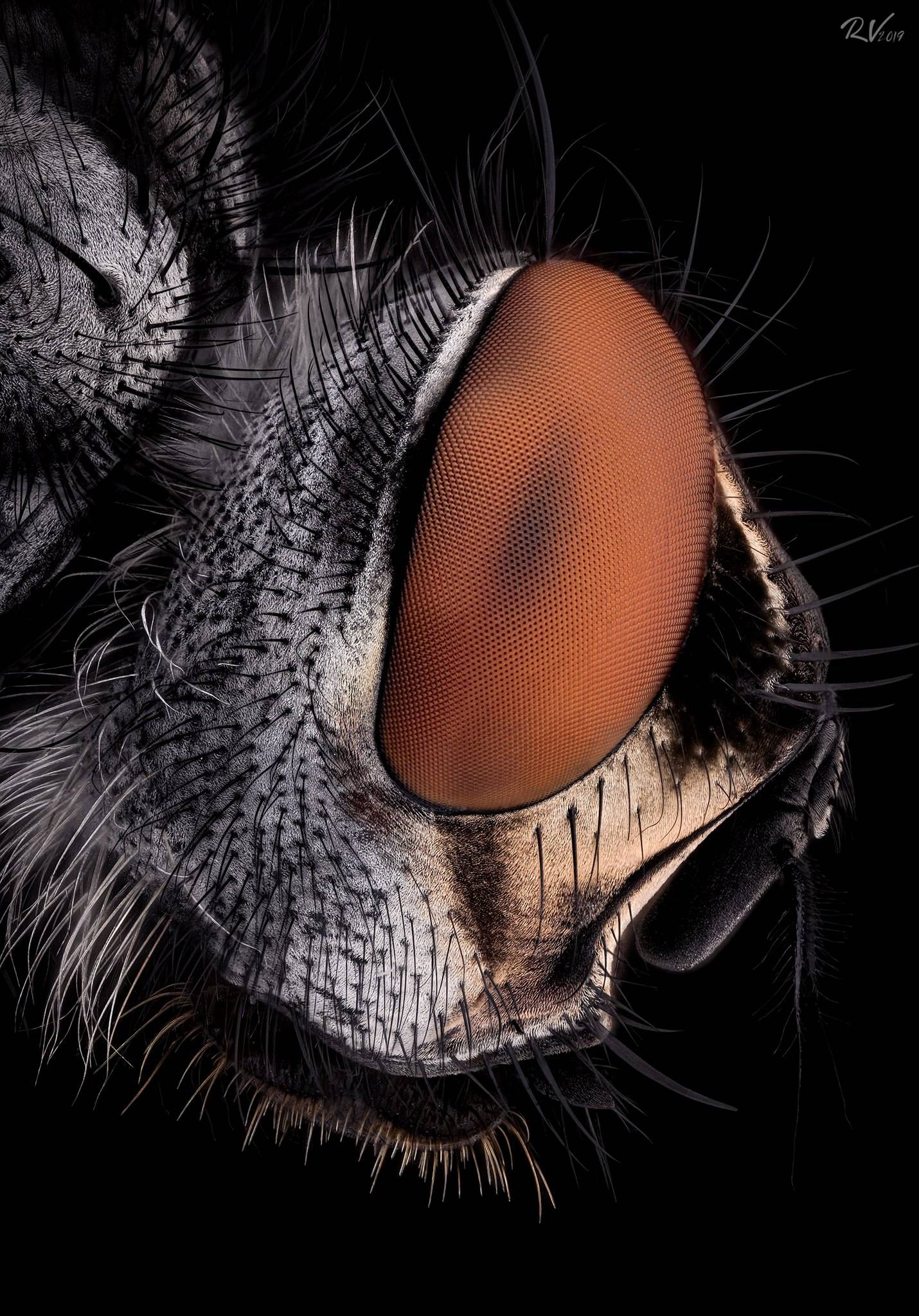 Naturally, I started with the eye(s). I made five variants. These were all exported directly from Illustrator and then previewed in Finder (macOS) Notice how the SVG has the best dynamic range. I don't know how that happened. 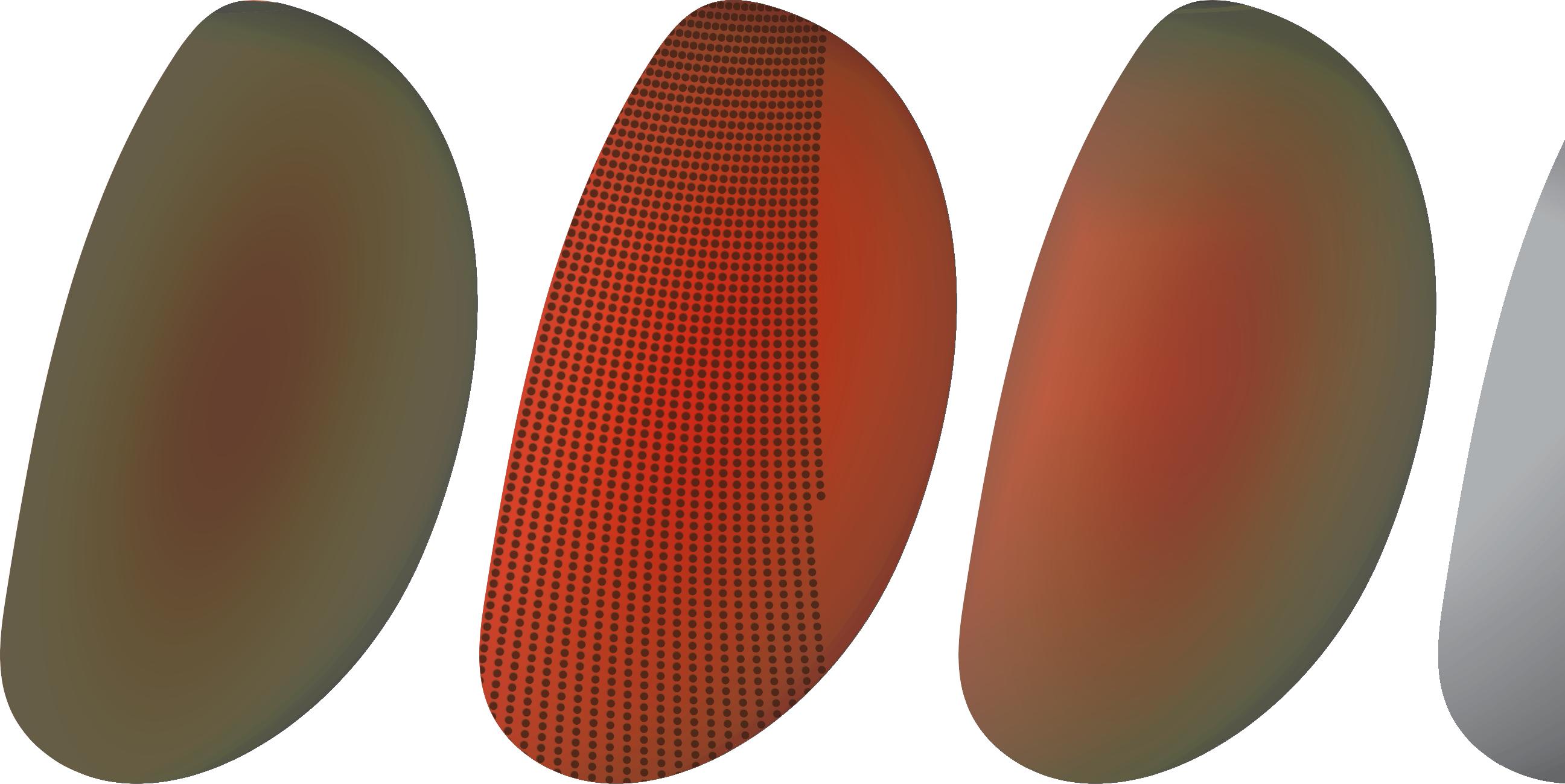 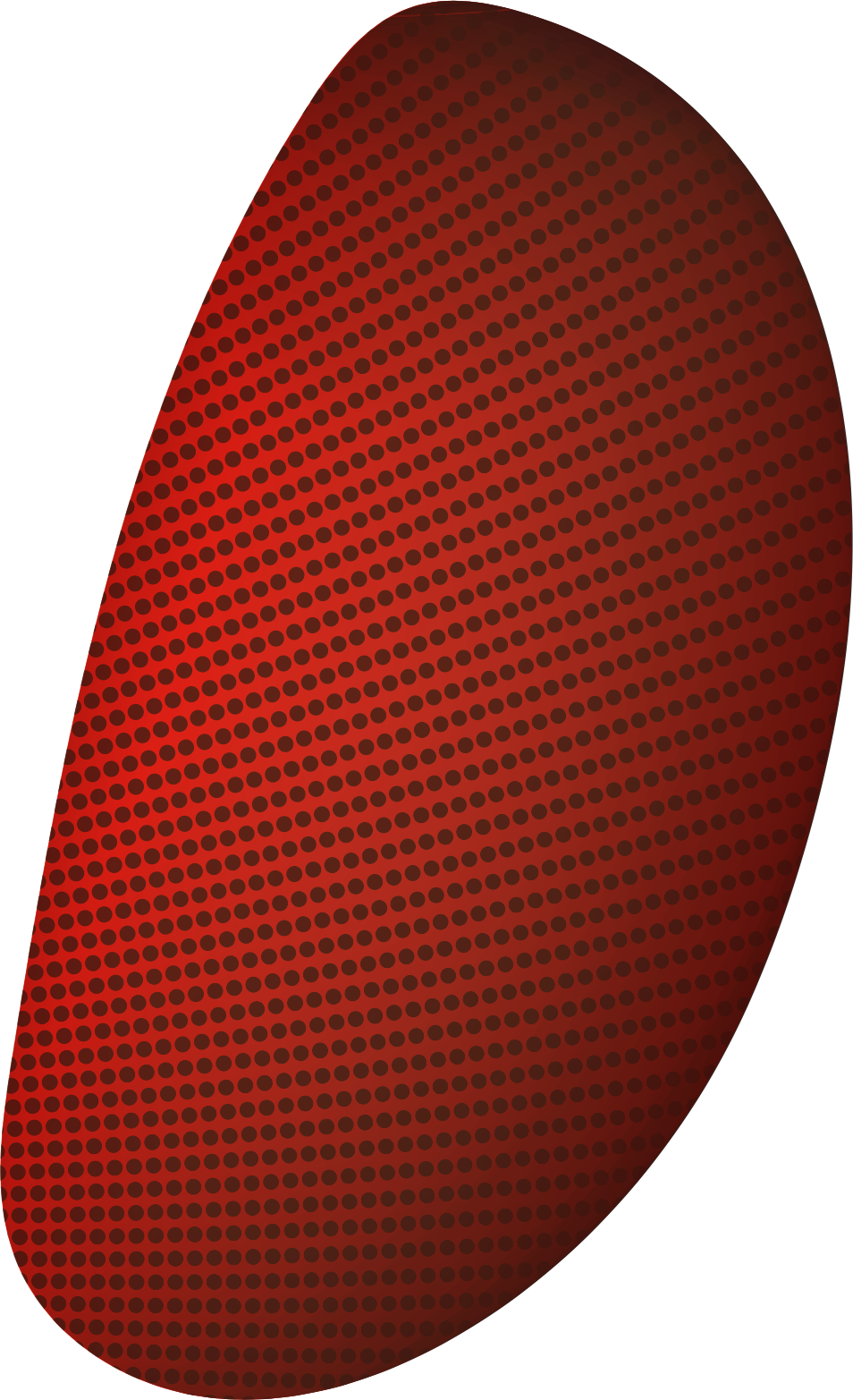 Screenshot of SVG - Subject #4 Isolated (second from the right) 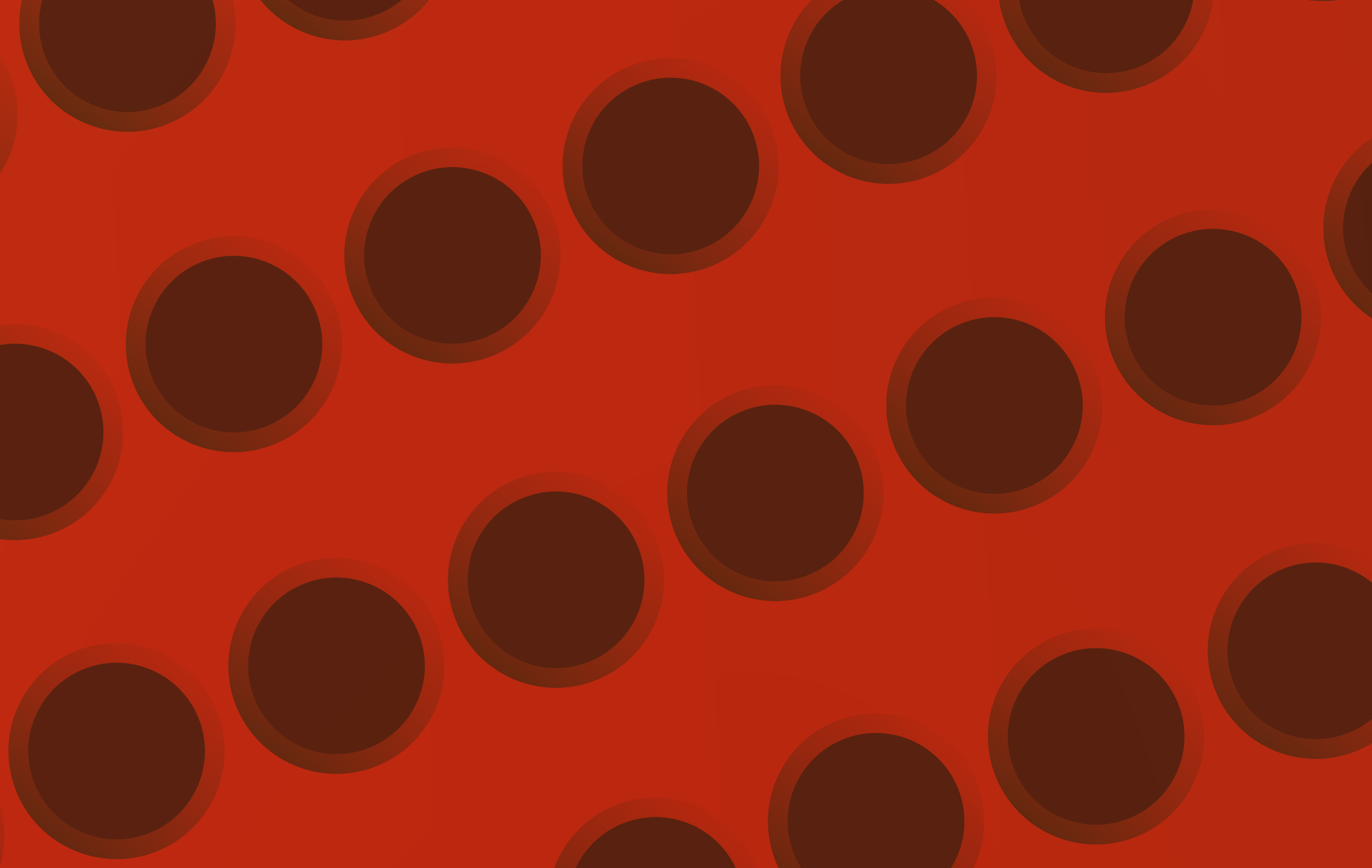 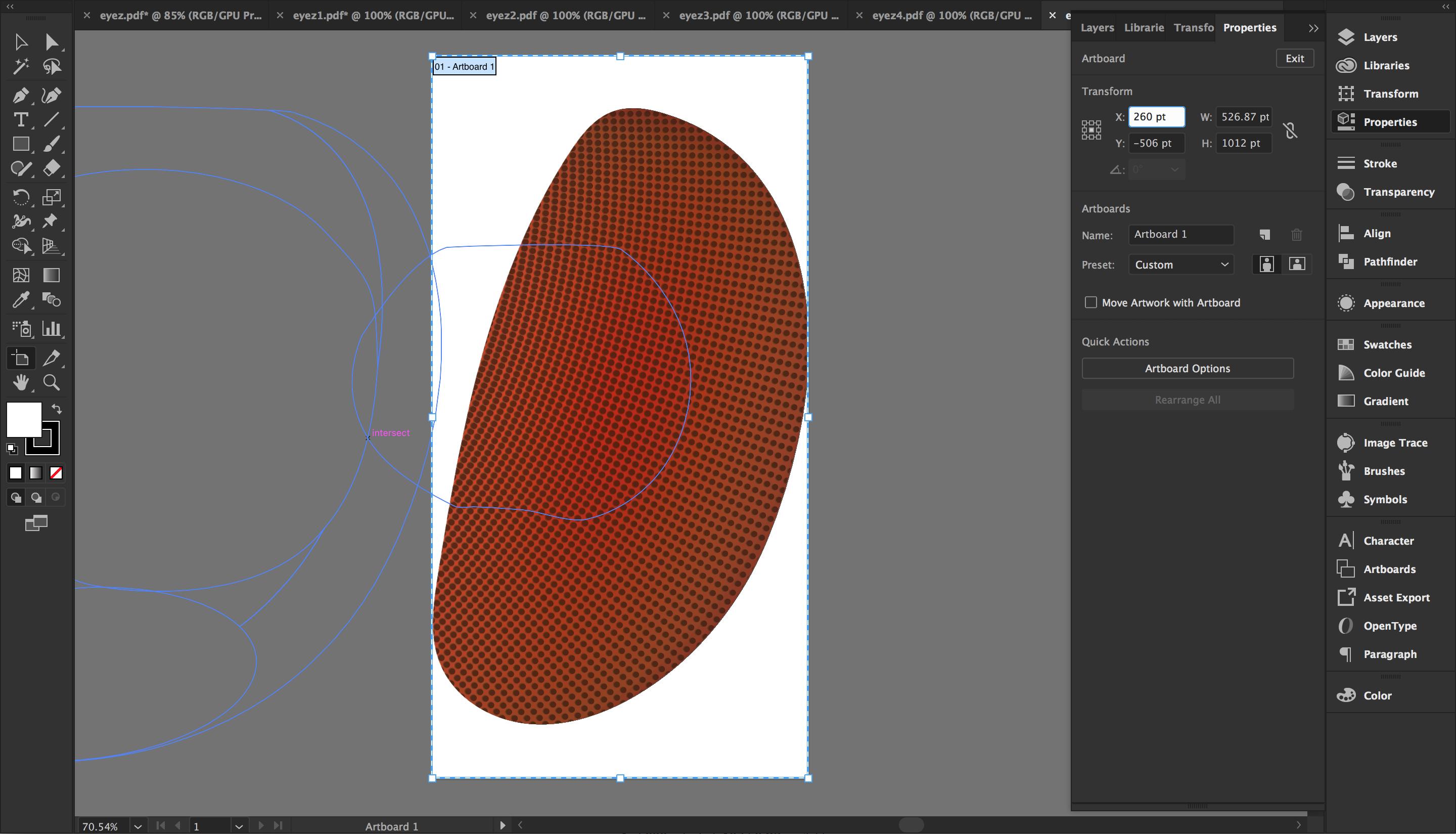 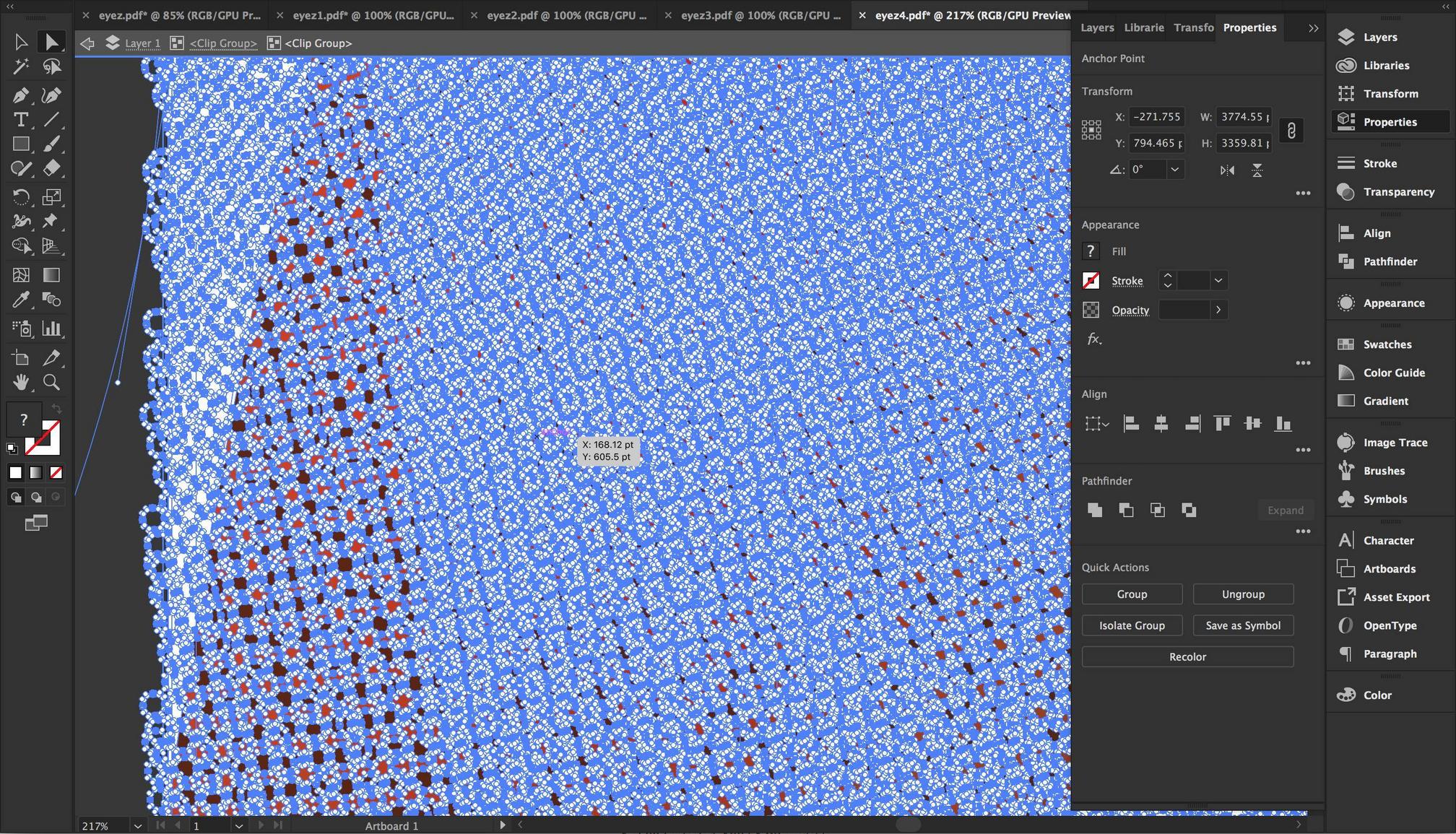 Screenshot of PDF - Variant with lots going on 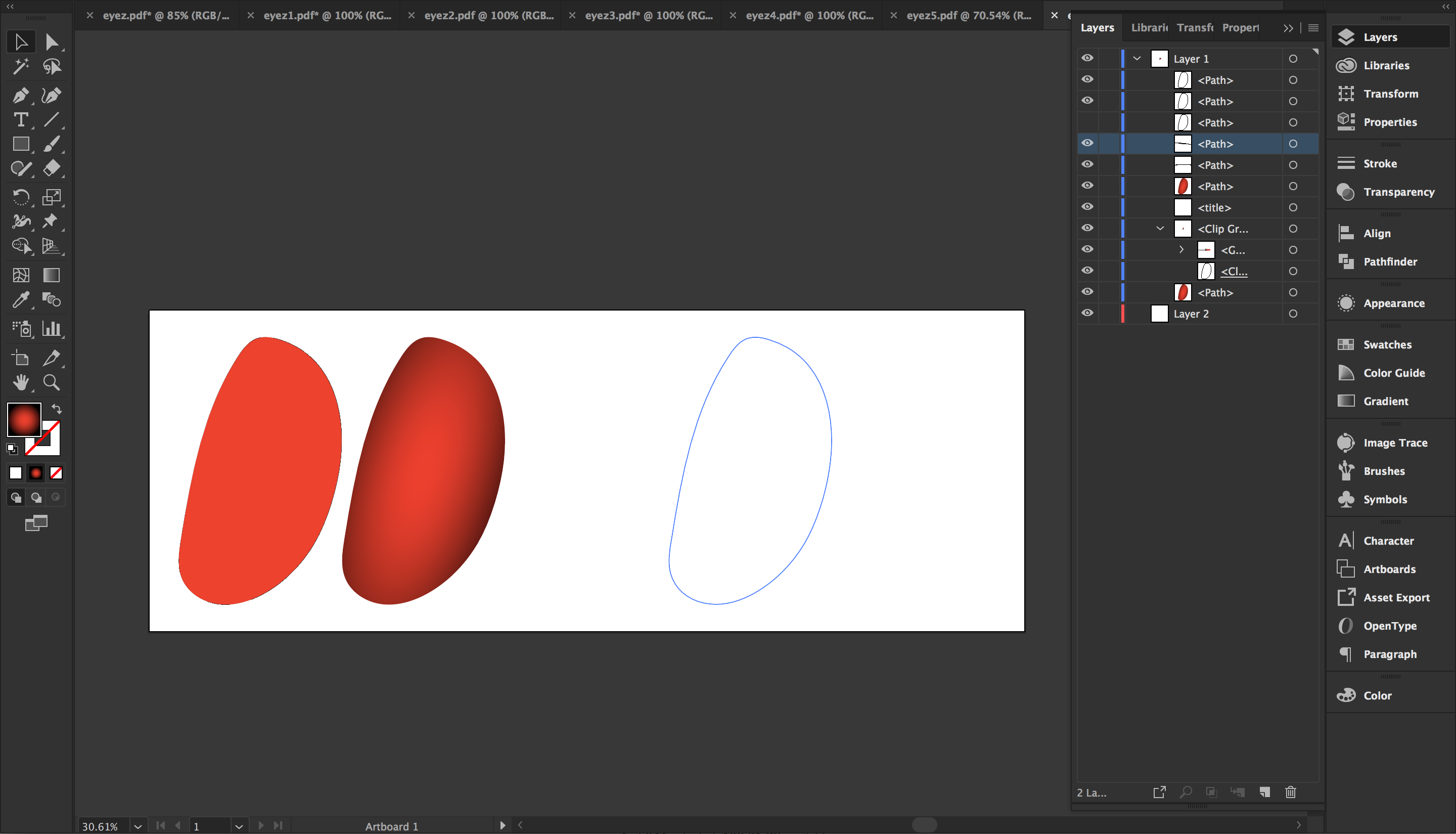 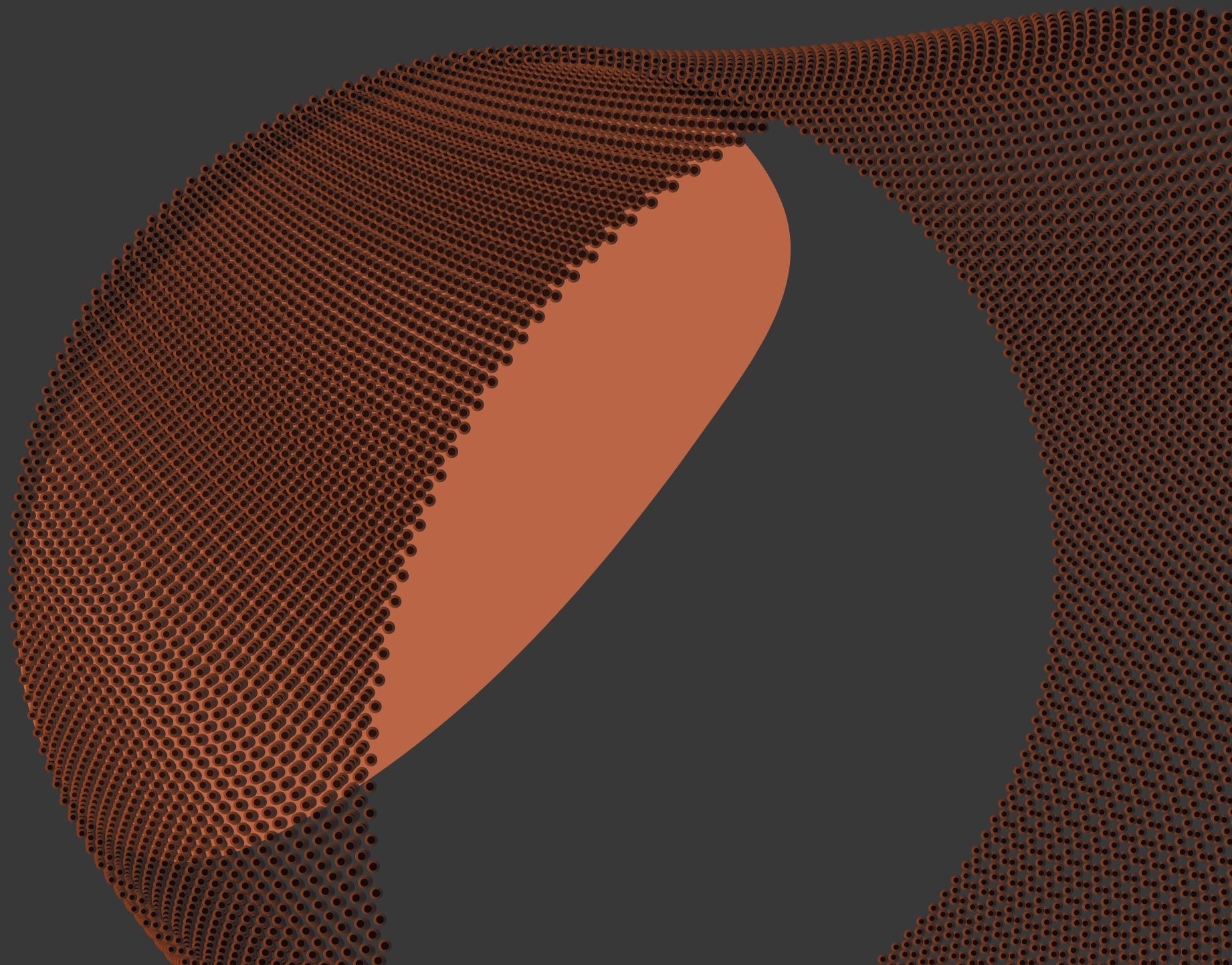 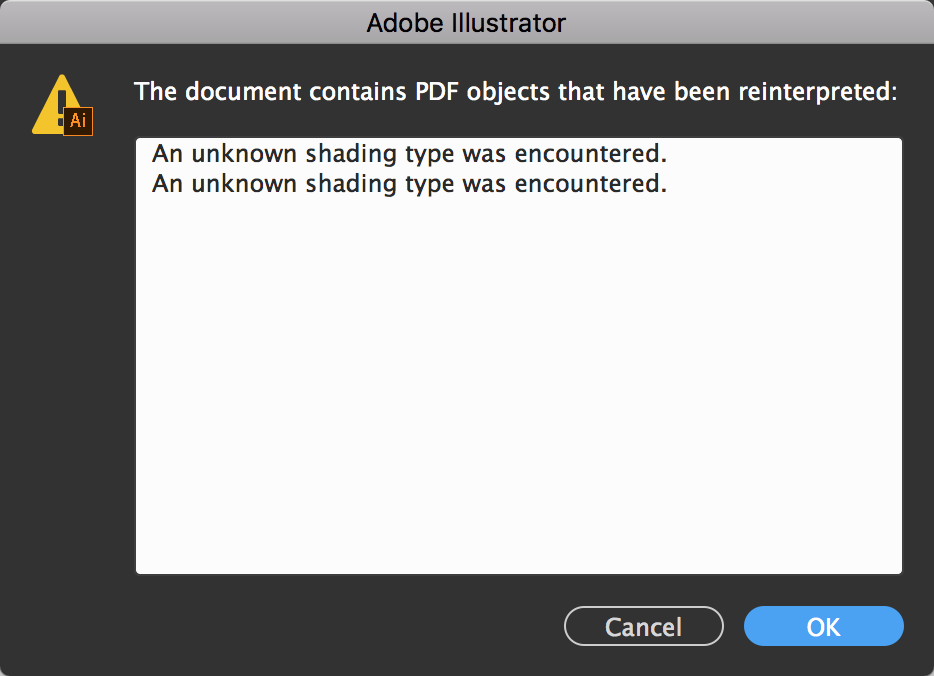 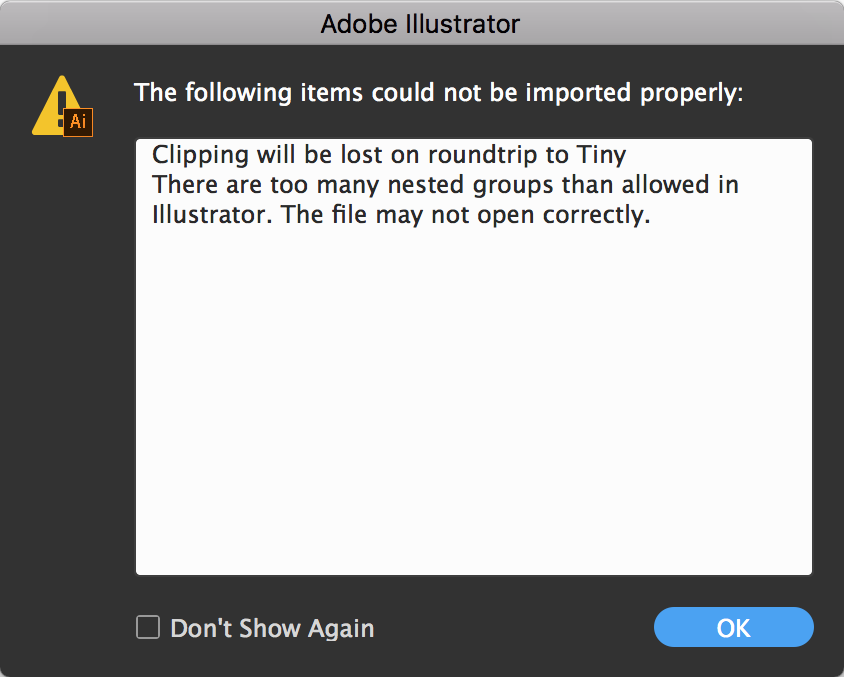 The SVG file is relatively light (12.9 MB) and can be previewed with my file manager, but cannot be opened properly by Illustrator (the software that built and exported them). Neither can Inkscape. Or any similar software that I've tried. So I resigned to using the PDFs that were exported at the same time. Illustrator can't display them properly either, but they still look kind of the same, almost; just kind of dull and lifeless. But even with a fully optimized PDF file weighing only 6.2 MB it's sluggish and locks up whenever I try to edit it.

I made the whole project public.
Browse the repository here.
Hosted on Google Drive

Overall thoughts, all I can do really as we don't have any details or screengrabs to understand your situation other than at an overview level:

1. If you have a lot of transparency effects, sometime a last step can be flattening transparency.

2. You can often save large file sizes when you have repeating or iterating elements by using Symbols.

3. Simplify paths whenever you can whilst keeping curve resolution - all the extra nodes / anchors add filesize too, especially with complex effects, fill patterns etc.

4. If you have a lot of faux-3D elements from Illustrator's 3D extrude or revolve tools, you can sometimes save file size and resources by expanding these, and then sequentially moving through the paths of that expanded group from the back, deleting anything which is hidden by the front elements - the 3D system generates ALL the relative surfaces projected into your 2D Cartesian space, in their appropriate relative stacking order - so when for example you've a solid roughly cylindrical object with shading, there are a bajillion filled paths that were "facing away from you" on the "back" side of the object, and illustrator faithfully reproduces them all for you in case you want to use transparency or wireframes or something: removing all faces you cannot see (culling, in 3D terms) will save you filesize and should make illustrator more performant.

In this image I did the exact opposite so you could see what I mean: I expanded the 3D rotated object and deleted the forward-facing stuff so you you could see all the stuff Illustrator created for the interior surfaces, the backwards-facing surfaces etc - all of which you can typically remove with impunity. 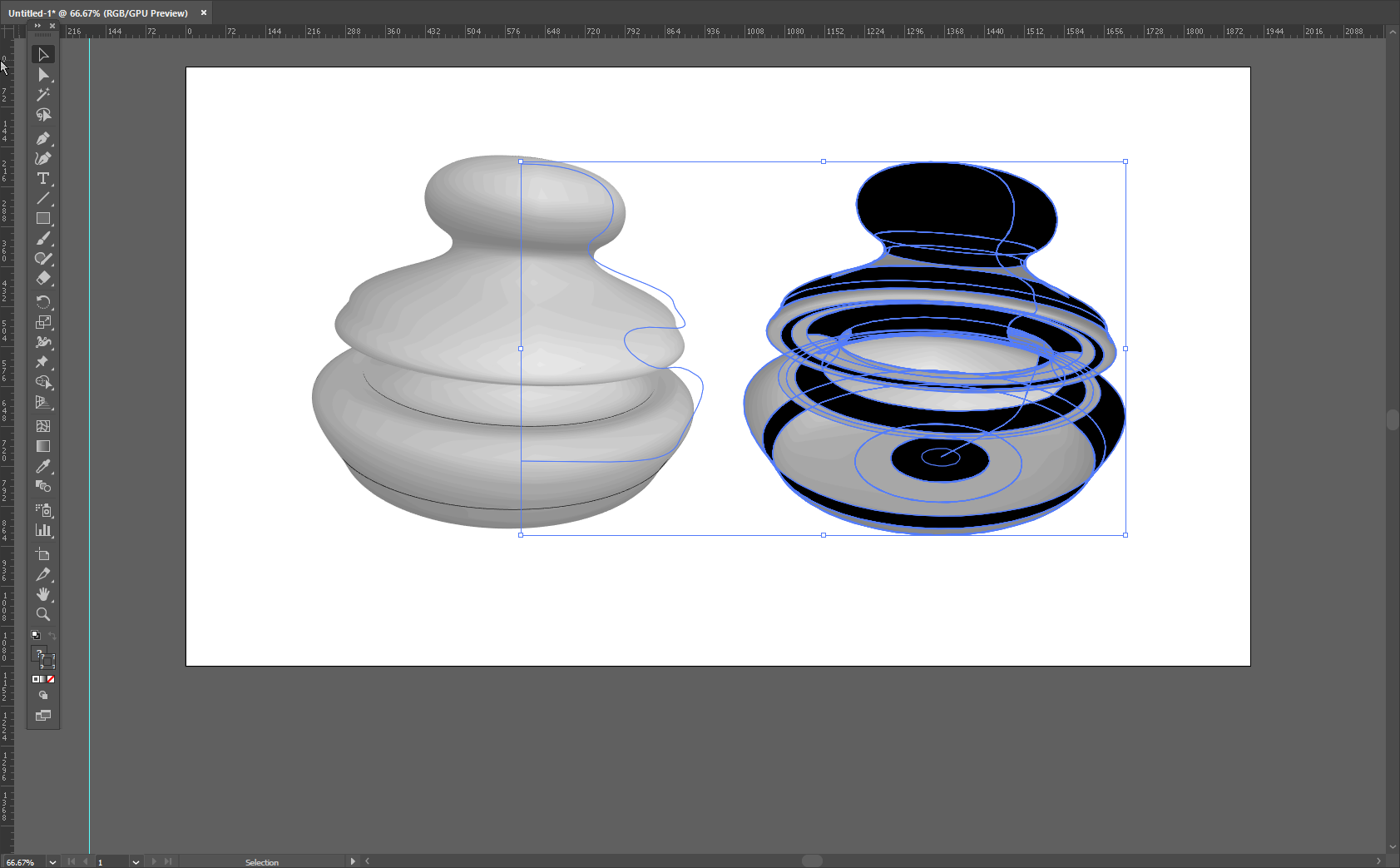 So - save lots of versions of the files as you go.

Also worth considering - you can Place Illustrator files into Illustrator files - so you could, for example, do your 3D extrude or rotate, and keep that in a single object container file, and place it into a hosting file in which your overall illustration exists - once it's placed, editing is a double-click and you're in deal, and you can both make your main file more performant and a fair amount lighter - and depending upon your workflow needs, this can allow task sharing in a meaningful way too.

Here's a host .ai file with the rotated object .ai file placed into it: 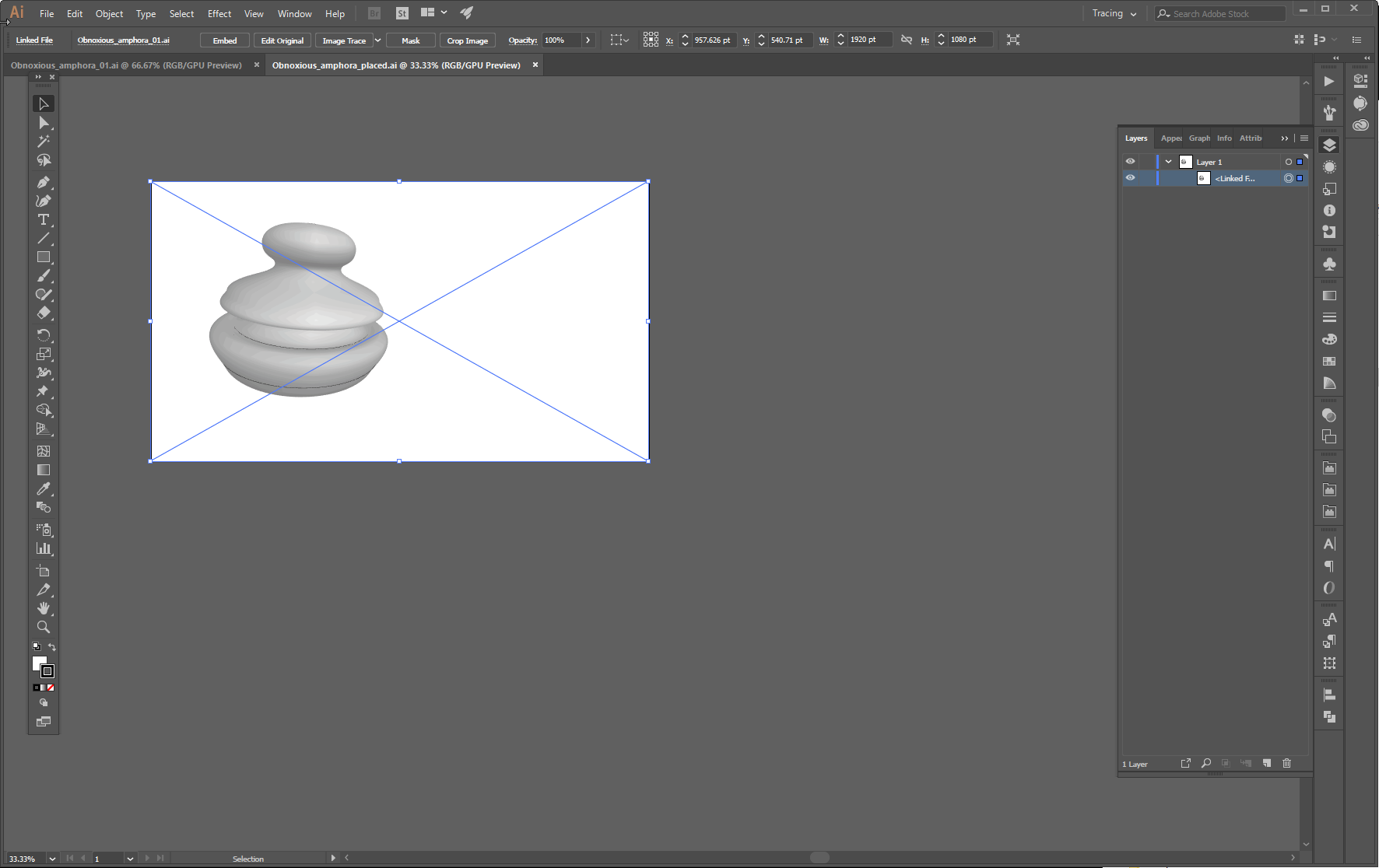 Hope some of this helps somehow; good luck.

Not the answer you're looking for? Browse other questions tagged adobe-illustrator vector workflow flatten or ask your own question.