Create interactive pattern inside a shape in Illustrator

I have created a pattern and I want to use it inside a shape interactively.

The pattern is filled horizontally in the image. I want it to be filled in a path along the fish's body. How can this be achieved?

I have read some answers where some people were able to achieve it using 'tilde' key, but I am unable to achieve the required effect. (I am using Adobe Illustrator CC 2018) 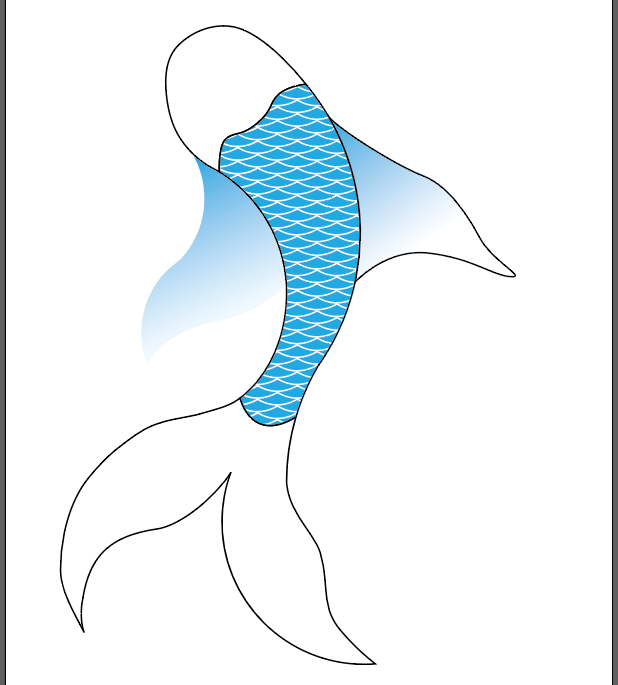 You can try to make a brush

In the left there's a large horizontal piece of a pattern. It's dragged to the brushes collection and defined to be an artistic brush.

A curve has been drawn, the brush is applied to it.

The red shape is a random body which follows approximately the curvature of the previous curve. It's used as a clipping mask in the rightmost image.

A copy of the red shape, but without a fill, stroke only, could be used as the outline, if that's needed

Clipping mask is not the only way to make it non-uniformly wide. Try also stroke Width Tool. It works also with complex brushes. In the next stripe the width tool is applied in the right:

As all pattern bending methods, using the pattern as a brush stretches and contracts the pattern at curves. There's no easy method to avoid it. The final pattern must be built manually for constant sized scales. That's not especially complex, only tiresome and it's very difficult to make it to look out regular.

You can switch on another gear in difficulty, if the pattern must be look out like it's wrapped around a body which has a thickness in 3D. In Illustrator you can solve it by making an extruded cylinder which has the scale pattern as a mapped surface texture. You can use an expanded image of that cylinder as a brush. It's tried in the next image:

In the left there's a piece of scale pattern (white fill, blue strokes). An ellipse is extruded to a cylinder. The scale pattern is put into the synbols collection and placed from there as mapped art onto the cylinder.

The view of the cylinder is rotated to straight sideways. Object > Expand Appearance is applied to fix the effect. The shape needed much cleaning. A clipping mask was removed and the shape was ungrouped 3 times.

Finally the blue parts were extracted (=select one, then select same) and dragged apart . The blue scale shape was sliced (Object > path > Divide objects below) with 2 vertical lines to seamlessly repeatable pattern and a pattern brush was made.

The brush was applied to a curve and the width tool was used to generate a form.

Warnings: 3D extrusion should be used in "no shading" mode to avoid extremely complex pattens when expanded. Also strokes are bad, have the circle or other extruded shape with no strokes.

The pattern strokes will not survive as mapped artwork, they will become uneditable filled areas when the extruded shape is expanded. You can still recolor them by changing the fill color. The scales are only narrow stripes, so colorizing the body of the mermaid is possible with a colored underlay shape. An example:

Not the answer you're looking for? Browse other questions tagged adobe-illustrator logo patterns swatches cc-2018 or ask your own question.