This is the picture of graphene oxide which I copied from a journal paper. How to create this kind of drawing using Inkscape ?

I have tried to create the diagram, like a flat sheet.That is also possible in MS Power point. But I am not able to create the wavy appearance like shown in the picture.

Inkscape isn't the right tool for your attempt to reproduce that image. It's not theoretically impossible, but Inkscape hasn't easy to use deformation tools for creating the wanted apparent 3D form.

In Inkscape you can make a straight plane image which contain that hexagon based structure. Without knowing the exact wanted structure I cannot write anything about the drawing methods that are needed.

One thing should be quite clear. It cannot be a photorealisic image of some real piece of graphene oxide, because photos of molecule structures are lunacy. Light is far too grainy for them and the structure is a statistical distribution without any solid form. I guess you want a quite finely rendered version of a bended sheet of some commonly used symbolic visualization of the material.

To put the straight 2D drawing onto a surface which is in 3D and has bends and bumps is easiest in a 3D program. You get for ex right perspective automatically.

Illustrator has some pure 2D tools (=interactive envelope distortion and warping tools) for that looks, but Inkscape hasn't such. Inkscape has path effects such as envelope deformation, but they are for simple items, not for full complex drawings.

Then there's the need of shading (lights and shadows). 3D programs can make it automatically, in 2D you must paint it. That is a big advantage of 3D.

If you bend a flat 2D image, an acceptable shading can well appear for free, as a side product. The bumps make the dark pattern here and there more dense and that's darker, no apparent lightness controlling layer isn't needed in that case.

If you accept a high resolution bitmap end result, you have plenty of options, even in well armed bitmap image editors such as Photoshop, Krita, Affinity Photo and Paint.NET you can transform your straight 2D drawing to a plausible version of the illustration you wanted. Here's an example of such bending operation (only deformations, no shading in this phase) in Affinity Photo, which I see exceptionally easy to use: 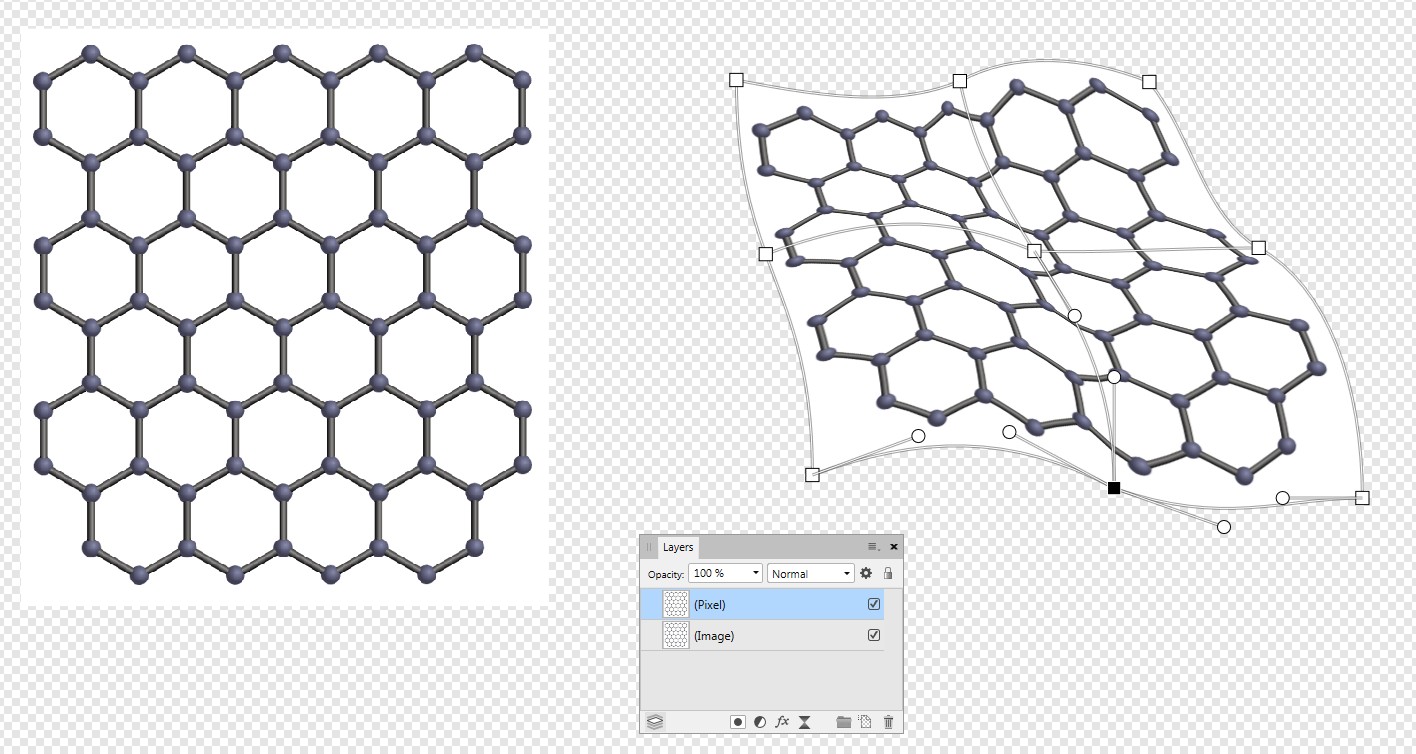 The warping mesh is only 2x2, but it can be as complex as one can handle. Illustrator has Envelope distortion with mesh, which is quite the same, except in Illustrator you can deform as well bitmaps as vector shapes.

The next image is a simple rectangular grating (=originally horizontal and vertical lines) distorted in Illustrator. It also shows how dense areas create false shading:

3D programs also want to make the final rendered 2D result as bitmap. If vector output is a must, you can take it without shading, if you have advanced enough 3D software. Then you can insert the needed shading gradients in Inkscape.

ADD: I watched some web images which seemed to have the same hexagon-like repeating pattern. Many of them were actually ads of 3D models of graphene-something. You can see a few of them in this marketplace: https://www.turbosquid.com/Search/Index.cfm?keyword=graphene

If one of them (or something in other 3D model marketplaces) happen to contain what you want, you can probably invest a few bucks and get that 3D model. But you must also have a program where you open it + cut and bend it to the wanted form. The needed 3D software user skills for less than 100% random working take easily weeks to get learned, if you are a beginner. If you are in a hurry, get local help or order the illustration from a competent draughtsman. Web is full of them.

Not the answer you're looking for? Browse other questions tagged adobe-illustrator inkscape design-principles artboard art or ask your own question.

2
Button Focus effect with inkscape
3
How to seamlessly merge junction of different shapes with gradients?
1
Need a font size with fraction in Inkscape
1
How to edit an EPS with GIMP or Inkscape
6
How can I draw a loopback connector using Inkscape connectors
0
Trim a shape in Inkscape
5
Inkscape: add a border around an arrow (for visibility)?
0
How can I connect a path to an object in Inkscape?
1
How to make a wavy surface in Inkscape?
7
Inkscape Text background with LaTeX text