why have odd numbers of logical pixels in an inch, such as ppi of 96?

I was just looking up the definition of pixel coordinates for the flutter framework. You specify sizes in logical pixels. There are 96 logical pixels in an inch, which translates to roughly 38 pixels per cm.

This seems like a very odd number. I mean, using inches as unit of length is already slightly strange to a European, but since the framework is developed by an American company, that makes sense at least. But still: Why not have 100 logical pixels per inch? That would make all conversions so much easier.

I looked this up and the official term is Device Independent Pixel. Windows has been using 96 pixels per inch as well (now this is exposed as a scaling setting), while Android is based on 160 pixels per inch. iOS expects you to specify sizes in UIKit pixels, where the conversion to actual physical lengths depends on the specific device. They can probably get away with it because iOS runs on a limited number of devices, but it does look confusing already.

What is the reason behind this? Is it historical, based on some typesetting conventions, or does it have advantages when you calculate the layout of your design?

This is beneficial for pixel alignment so you dont need to round or splatter units by half pixel values. Admittedly such a system more beneficial if you need to work with dividing ghroups of humans as they resist splitting in fractional numbers, really, really much.

Admittedly a multiple 60 would be better than 96 but it is probably too big a number. Manly as 60 is divisible by 5 too, so i would in fact use 120.

Here is a plot of how many divisors numbers have from 1 to 120. I have labeled the first numbers attaining a divisor count. Numbers based on ,multiples of 12 and then later 60 dominate. 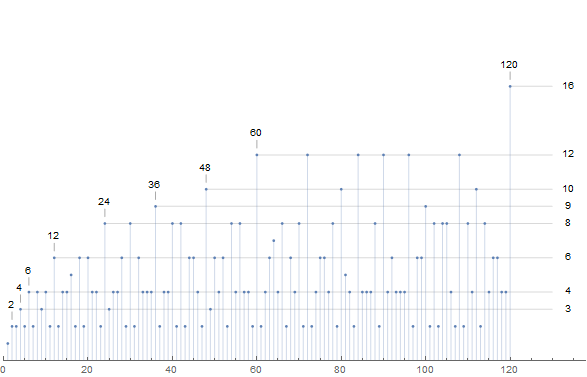 I never meet an European graphic designer, printer, who would use centimetres in the context of resolution. We just don't care. 96 is just bigger resolution from previous "screen resolution" of 72 pixels.
Why 72? Because Macintosh and Apple. Macintosh worked with Apple printer so the 72 was chosen because the picture on screen had the same size as in print.

Why 96? Because Windows. They came up with a whooping 1024x768 pixels in the late 80's. And figured out that if distance from printed page to eye is x then distance to screen should be x+1/3x.

Does it matter? In printing. In land of display you can dynamically change what you see. Zoom in, zoom out. Use 4 pixel square to act as "bigger pixel". You can "adapt" picture on the go. In printing you don't have such luxury.

Not the answer you're looking for? Browse other questions tagged resolution pixel layout ppi pixel-grid or ask your own question.

28
What is the difference between DPI (dots per inch) and PPI (pixels per inch)?
31
How can I export an image from Illustrator image at multiple sizes?
2
Which Photoshop features are affected by different DPI or PPI tags?
3
How can we talk about the “resolution” of a JPEG file?
0
calulating PPI with 10.1 inch (diagonal)
14
Are pixels in Photoshop logical or physical?
1
How to design in Photoshop an image for a display that has 132 PPI horizontal and 142 PPI vertical
2
In printing from digital images, how is PPI converted to DPI?
8
Dot vs. Pixel - rudimentary explanation