Can someone explain the differences between these 5 terms, as if I were 5 years old? 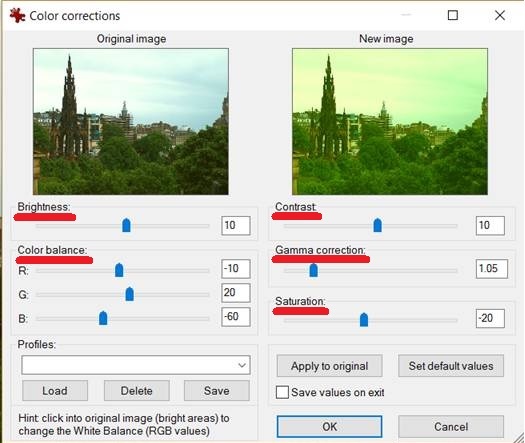 NOTE : I'm not photo scientist who knows every properties deeply thus this answer contains the explanation according to my sense! I might be wrong somewhere :)

Well all terms are based on different base like terms "Brightness" and "Contrast" are based on visual perception of "LIGHT" (which is ray itself and contains many physical values like wavelengths and etc) while terms "Saturation" and "Color Balance" are based on "COLOR" which also depend on light!.

Science says that our eye can only see something if it reflect any kind of light rays! if object will not reflect anything then our eye will consider it as black color! so same goes for images! brightness stands for the value of the light reflected; to test it just adjust slider to the max and you can see now your most of the part of image will be looking like its reflecting the light and therefore most of part of your image will be white

now i don't think contrast can be defined in some proper language but to make it easy to understandable i'll tell it : contrast it the relative different between brightness of different objects!

now what did i just said?? well basically contrast is comparative value as I think like assume you have two fruits! apple and strawberries in this case if you will put white lamp on both fruits which is placed together you'll see raspberry is more shiny then apple; in same case if you'll put different colored light like some yellowish black then there might be condition when your apple will look like it's more colored so basically the contrast is the visual difference between two objects reflexive brightness and color!

The best way to understand this term is to take example of saturation word from chemical science. basically in chemistry the term "saturation" stands for quantity of specific element in specific object. same rule can applied for the color as well. you can define saturation as the quantity of specific color (only primary colors) in any image so if you'll increase the value of saturation all of the color shades will be start turning towards it's primary color like if there is dull red (brownish) color then upon increasing saturation too much will result your color into red!

this is so easy and experimental term to understand. if your color model is rgb then color balance is only about changing saturation of Red; Green and Blue separately ! thus if you want more red color in your image just increase Red slider!

now this is the term which is hard to explainable because even I can't define it but as far as i understand it is like changing darkness in brightness and contrast; I means if gamma will increased then i think the both brightness and contrast will be increased and it'll seems like image gotten bright and clear and if you decrease it then the image will be seems like dull! but still I'm not much clear on this term!

Hope this helps you to understand the terms! and after all you don't have to learn definition at all as joonas and jooja said in comments just adjust sliders and experience and learn ! Best Regards :)

Not the answer you're looking for? Browse other questions tagged color-theory terminology image-editing irfanview or ask your own question.