Creating a 3D Extrude & Bevel of a package in Adobe Illustrator, how can I reach the same angle and perspective for Top View and Bottom View of the same object?

I can set the same Y and Z values, but how to adjust the X values for both, so that Top and Bottom objects look from the same angle?

Current view looks almost the same, but if to overlay both on each other, their sides are not aligned identical.

Values I set for Bottom View: 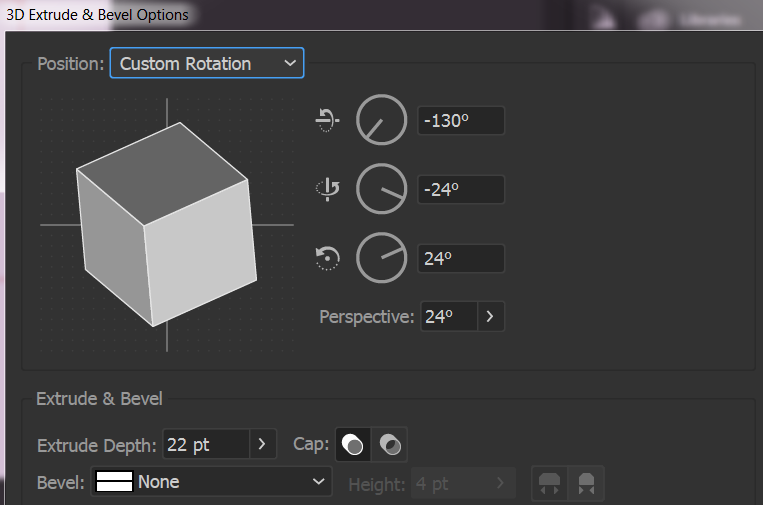 Values I set for Top View: 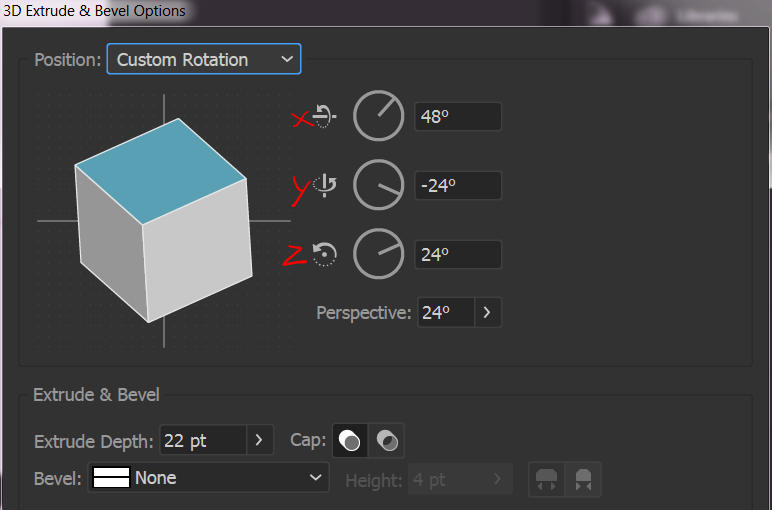 Here is the print-screen of the 'Map Art' 3D option in Illustrator. Isn't it a true 3D? 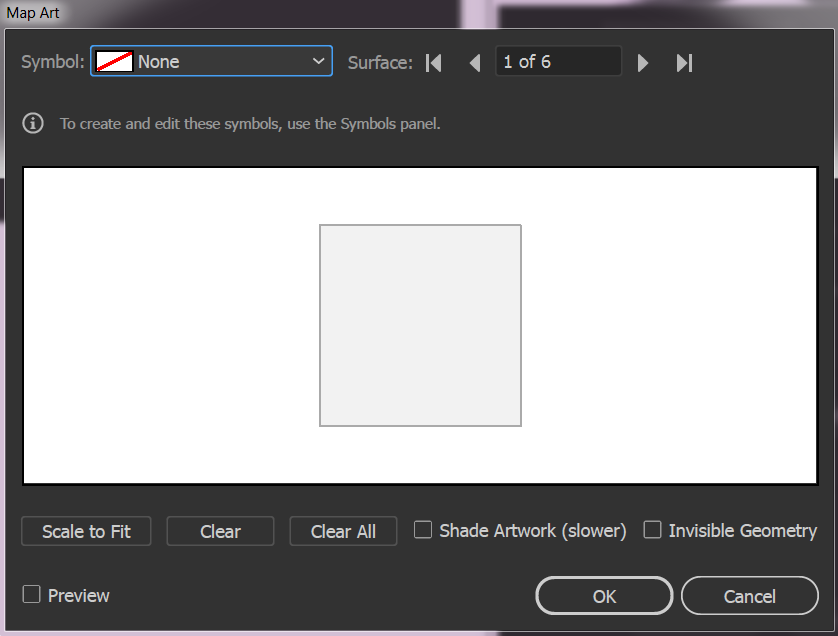 Illustrator's 3D effect is not "global". It is object-oriented. Meaning each instance of the effect is bound by the artwork it is applied to, not the artboard or "scene". The 3D effect is completely ignorant of any other objects with the 3D effect applied to them.

Illustrator is never the correct tool to use if you want global 3D settings. The only way to get "scene-like" 3D is though continual trial and error and "tweaking" of individual objects.

Or.. applying the effect at the layer level. 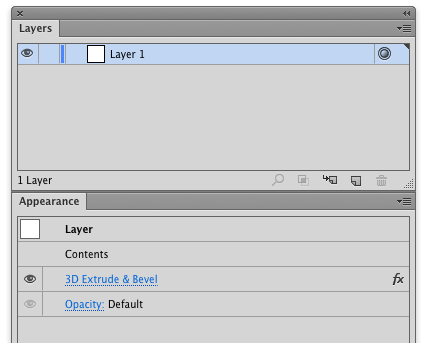 This means everything on that layer will have the same 3D Effect appearance applied to it.

But, when you apply the Effect to the Layer you can, and will, run into odd intersection issues....Note the purple shapes in the image below. They are in the correct stacking order, but still have this weird overlapping intersection issue. 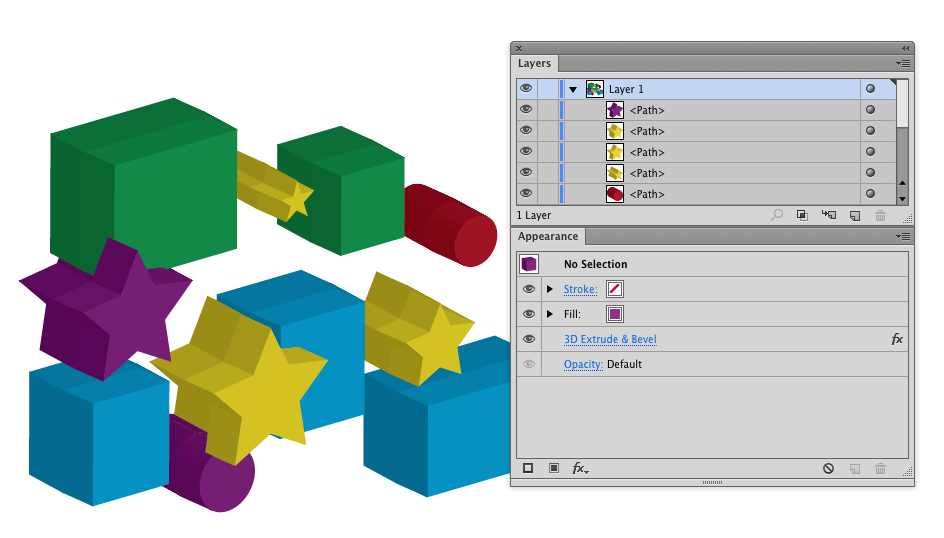 My guess is that by rotating your object 180° the bounds changed, thus changing the positioning of the object-oriented 3D center.

You aren't doing anything "wrong". It is, and always has been, a limitation of the 3D effect in Adobe Illustrator. The 3D effect is a "patch" solution.... a quick thing added many years ago to half-heartedly satiate users asking for 3D. It has never been fully developed by the Adobe team. And in reality, has never even been improved, updated, or altered in 10+ years of AI development. All they've done over the years since adding it is make certain the UI matches the rest of the application.

If you are seeking to build 3D worlds or scenes, you are better served by moving to a real full-fledged 3D application such as Blender, Lightwave, Maya, etc.

A little late, but maybe this is useful

To make top and bottom up versions (= otherwise the same projection, but 180 degrees differece in X-rotations) identical in Illustrator's 3D extrusion the shapes cannot be the same. The other shape must be = the first shape as flipped around horizontal axis.

Here the X-rotations are 75 degrees and -105 degrees. The results are identical.

About "does Illustrator have 3D?" Illustrator can show how a rendered 3D extrusion or revolution surface would look out. But there's no accessible 3D surface. You cannot build proper combined pieces. An example:

In the left there's 2 extruded shapes. This is in a 3D CAD program. Illustrator would make the same pieces in few seconds.

In the right there's a boolean difference of 3D shapes. It was 2 clicks in 3D CAD. Illustrator has nothing to make it in 3D, you must draw it.

About vector rendering of a 3D scene: It's sometimes useful to export the 3D scene as 2D vector wireframe and open it in Illustrator:

In this way it's well possible to get some tricky 2D drawing work done with very little effort. In Illustrator one can start from coloring or drawing the easy pieces.

About artwork mapping: It's a calculated 2D image how a 3D piece with mapped images would look out.

The mapping often is impossible because Illustrator divides surfaces to pieces. Only very simple shapes can be extruded or revolved so that you get the expected number of surfaces. Generally you may think you need 1...4 art symbols because you have 1...4 visible textured surfaces. But if the surfaces are divided, you must cover separately for example a dozen of them. Making all to fit is a nightmare.

Not the answer you're looking for? Browse other questions tagged adobe-illustrator 3d perspective or ask your own question.

2
Adobe Illustrator Transparent Mask
0
Illustrator CC: Mapping Art to 3D Object in Illustrator but the "Surfaces" aren't fully selected
1
Illustrator: how to align grouped objects and expand to be aligned top and bottom?
2
How can I create a spherical perspective grid in Photoshop or Illustrator
0
An orthographic projection has the same front and top view
3
GIMP - Flat image to round ball surface (sphere)
1
Why can ellipses be used to find squares in perspective drawing?
0
How can I distort one picture to make it match the perspective grid of another?