How to display better a product on a outdoor photo, without making it look childish and unrealistic?

For my next campaign, I have to use a half back and white, half colored photo of any Indian monument (Represents our Independence Day).

I also have to show 2 products --- they are EKG / ECG Machines --- one less colored, one little colorful and bright. Split is used to show one product was launched 50 years ago, and 2nd product is launched in this century. But I can't figure out if it's even possible without making it looking childish and ugly.

Right now it looks very bad at least to me.

The main problem I see is because the monument is basically outdoor. And product doesn't fit outdoor. Even if I place a table in place of that greenish/white area, it was looking very odd and unrealistic, as there's highway in front of monument.

I tried some options, and I guess it's not working. So is there any other approach that I can try out?

PS: The monument can change, but the products are a part of campaign. Positions can also change, but BG should be visible.

EDIT: Okay, I realized one thing after posting this question (read a comment under this question). Hand might seem a bad idea here. So I'm instead, using 2 products (2nd product will be different, more colorful). One for dark side, one for colored side, as shown below): 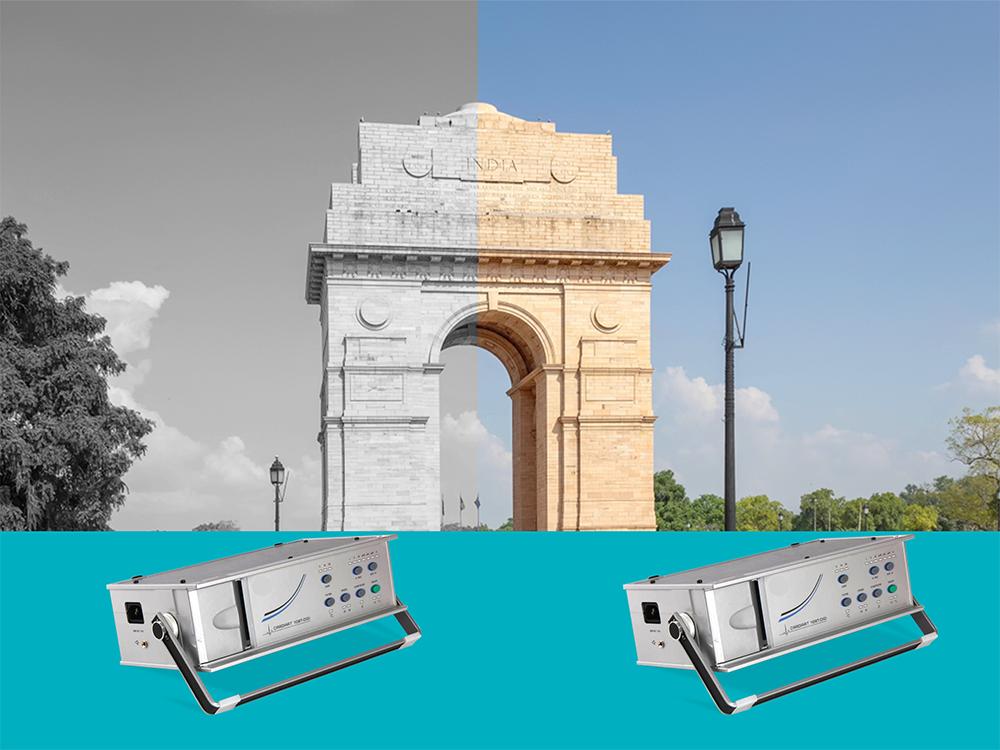 So it's slightly less childish (IMO). But still the question remains same. I don't find it very aesthetic.

I would suggest using a different treatment (medium) for the old and the new. The photograph seems appropriate for the product because it gives a detailed representation of what's being advertised and it's the more modern item. I think the change of color is beneficial but the contrast needs to be even more extreme.

To contrast with the photograph in the foreground:

I would suggest an approach where the background is treated in pencil or ink, as an illustration with a vintage style. Maybe a rough sketch or a cross hatch rendering or something along those lines. You could test this hypothesis by using a filter in Photoshop to have a rough rendering of what it could look like and avoid wasting precious time.

I would also use a limited palette of greys or possibly another color found in the photo for better harmony.

I would split the ad itself in two. Pick whatever monument - What you have (if well-known and high recognition) is fine.

The concept you want to push is "Then & Now."

Then: On the left side including the product launched then, I would show it with coarse screen (65-80 lines) as if it were shown on newsprint in a B&W newspaper of the day (or a little before for the sake of theatrics). Screen the equipment a bit finer for detail. Float the product on the background using techniques used then. Research your publications. (This is supposed to look pre-Internet.)

Now: On the modern side, the ad would be in colour shown as punchy and sharp as you can make it look "Now."

Run the copy spanning the split layout. Keep the logo on the modern side. If you have an elderly logo, stick it on the "history" (left for LTR reading) side.

To get the maximum impact from the comparison, use as much cliche technique as you are aware.

I am only seeking to help you create an advertisement which will gain sales......

Nothing you do is going to make this concept work.

A ECG machine has nothing to do with any national monument, any "passage of time", or a nation's independence.

Create whatever you want to create. It's all going to have a horrible return on investment (ROI) no matter what it looks like. This advertisement fails at the concept stage. It will always appear to be more of a "Travel" advertisement than a medical advertisement if you focus on a monument as the primary visual.

I would stress that color photography was prevalent in the 1970s. Black and white in no way indicates "50 years ago". In fact, other than "art photography" such as Ansel Adams, you'd be hard-pressed to find black and white photography from the 1970s. So, not only does the concept fail, the execution is in need of rethinking.

Throw in the fact that the target audience is probably aware of what the monument stands for.... then you lose more viewers if they are not interested in something related to political matters or the country's independence.

I had to ask a couple times what the object was.... that's how bad the concept is..... there's absolutely no indication that the product being sold is A) a medical device and B) updated in terms of technology. These should be the primary areas of focus.

Without function whatever form you use is irrelevant. This concept has no function and should be scrapped. Not all ideas are worthy of exploration. This is one such idea.

A better path may be to focus on technological advances in 50 years. That would certainly relate more to the device.

If you must use a photo of the monument... then a mock-Polaroid appearance blended with a smoother/clearer photo would work better in my opinion. (Polaroid photos were very common in the 70s and have a fairly unique appearance.) Using a Polaroid to Digital Camera blend with the photo of the monument on them would indicate how technology has advanced in the last 50 years.

If you're going to show a "50 years ago x now" image comparison it needs to look very different.

You could even go further on the subtlety and just use the "old" B&W image against you shiny colorful product, if you think your target audience will get the idea.

Not the answer you're looking for? Browse other questions tagged adobe-illustrator adobe-photoshop photo-editing critique advertising or ask your own question.

2
Can this rough design show the required message?

8
How can I determine which drawing tablet is right for me?
0
Added a real life image to an illustration. How do i make it match?/Look better?
0
Are there any tricks for changing the height to width ratio of an image without making it look compressed?
1
How to make hyperlinked Photoshop slices look better?
1
How to add highlights on a product photo?
0
How to make an an old photo look perfect and natural
1
How to recreate this photo look
3
How do you find right plane/perspective to place a product on a photo?