I have this SVG logo. I want to make the lines thinner. 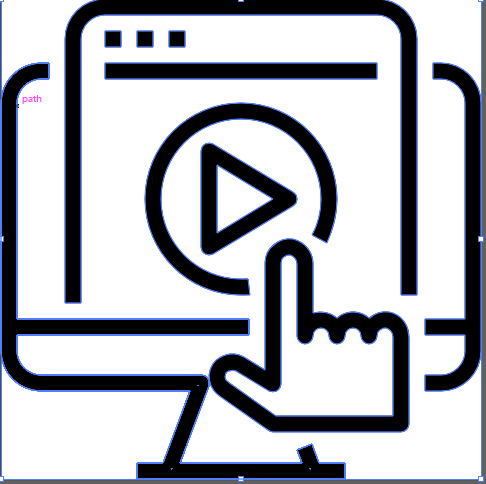 I have tried Offset Path -20px, but nothing changes.

I have also tried adding a Outline stroke that I can use and shrink, but when I go Object -> Path -> Outline Stroke

I apologize if this was already asked, I have looked over other questions and couldn't find the answer. I'm new to Adobe Illustrator.

You can find an approximate solution that you will then have to refine. 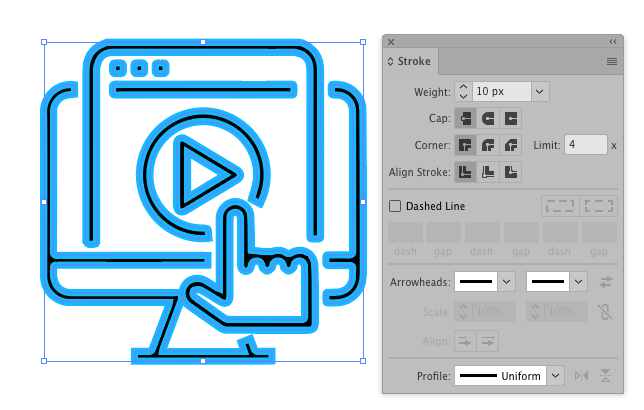 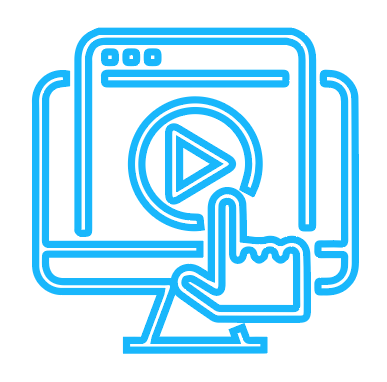 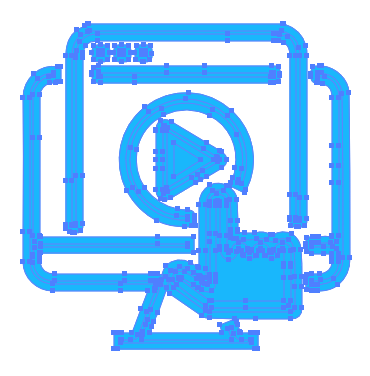 Get Inkscape (=freeware). Its Dynamic offset can work in your case. The effect is exportable. If one saves the result as plain SVG, it can be opened in Illustrator with no problems. 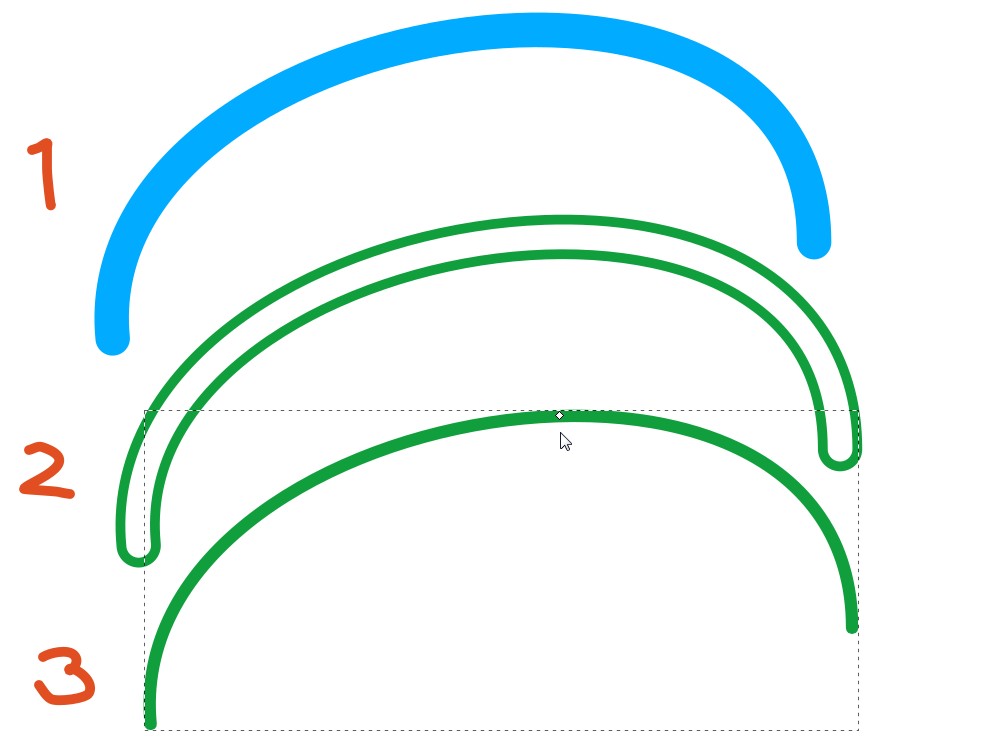 NOTE: To see the result better the adjustment is best to do for a filled shape which has no stroke. The green stroke is inserted here only for demonstration.

The method can be developed to get a single stroke, if that's needed. In Inkscape the Dynamic Offset is an readjustable effect. It can be fixed with Path > Object to Path. That makes the result a normal path. But it's still a closed shape if it's made of a shape which was like image 1.

That closed shape can be broken at the ends by splitting the path with the node tool. There's typically good nodes for it at tight curves, but one can also insert new nodes for it. Here the splitting is done and that half which got the original big rounded ends is moved apart: 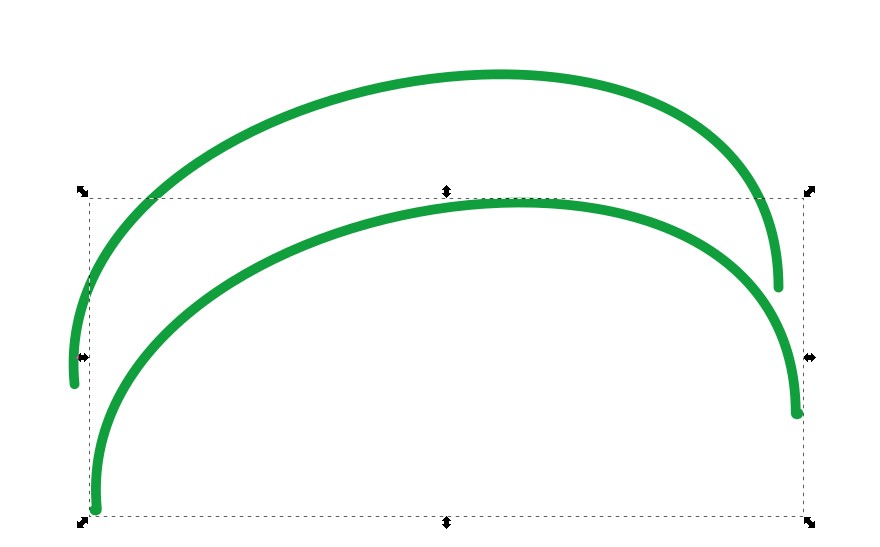 In Inkscape splitting a path doesn't release the halves, the result is a compound path. The parts must be released with Path > Break Apart. Illustrator's scissors release the halves as soon as they are clipped apart.

If the shape is like a closed path, a single stroke version needs different approach. In the next image the blue shape is actually a combined path (see the nodes): 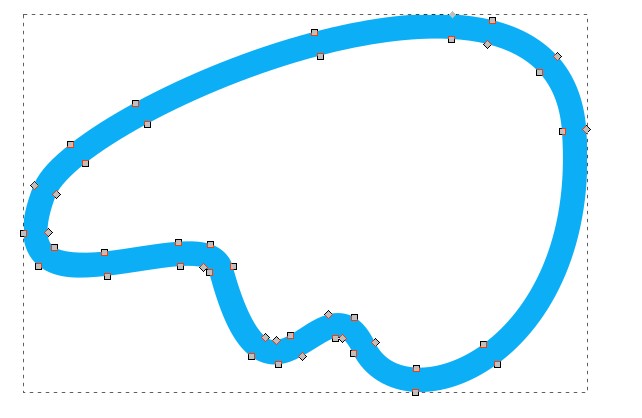 A red copy is made and Dynamic offset is applied to the copy:

The Dynamic Offset is fixed by applying Path > Object to Path and the combined shape is broken to 2 separate paths with Path > Break Apart. 2 separate closed shapes was generated. Both of them are quite nearly the midlines of the original curve. Another of the shapes is moved aside, both have got a thin stroke:

Dynamic offset isn't faultless. At sharp corners it can decide wrongly (=create a shortcut) and some edits are needed.

I would be tempted to redraw it, so that the black lines are strokes rather than expanded and filled. Then you can set the width of stroke to anything you want. It's not exactly complicated and should take less than 10 minutes. The results will be better than anything automated.

Examples of the same icon with different weights of stroke applied

Not the answer you're looking for? Browse other questions tagged adobe-illustrator svg illustration or ask your own question.

0
Making an image with thicker lines in a pattern

4
Group paths into fillable objects/Join open paths in Illustrator?
0
Illustrator cannot add stroke to path
1
Adobe Illustrator Save For Web SVG becomes empty
2
How do I combine paths to make a clipping mask in Illustrator?
5
Measure Path Length in Illustrator CC
2
Exporting only outline in SVG from Illustrator for 3D model
2
Resizing problems
0
Outlined font much thinner when saved as SVG
0
Multistroke object in illustrator - need to make individual strokes
0
How do I Seperate A Stroke from a logo or shape layer in Illustrator?