I have my primary skills listed as follow on resume (example), 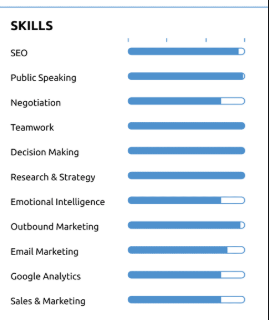 I want to make it more i̶n̶t̶e̶r̶a̶c̶t̶i̶n̶g̶ to the point and show the exact information recruiter wants to see e.g. number of years for each skill.

Anyone could think of interactive way of adding number of years and how ?

At the present it's just a picture, but I can use photoshop, gimp, word etc.. to make it look like anyway I want.

Related: Is having a skills bar chart on a resume a good idea?

Such graphs are largely pointless.

If you want to show experience in specific areas, then list things with actual usable information:

If you want to show such data in a visual, then use actual quantifiable information. 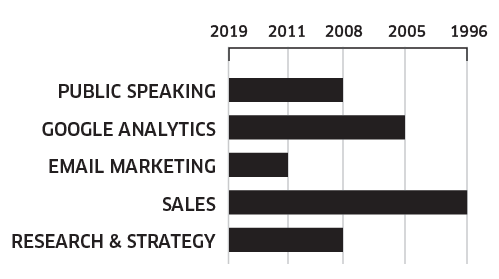 This way the visual actually means something. In addition, there's no "subjective" stance on what you think you are good at. It's merely hard, cold, numbers... years doing something. It's assumed by most that the longer you do something the better you are at that ability. Let the subtext express your level of skill, don't try to pull it off with a pretty bar chart or anything.

There are some areas that simply make you look worse because they are included -- Emotional Intelligence, Decision Making, Negotiation?? How would these ever be measured? Including these nonsensical "skills" merely makes it appear as "puffing" and I would absolutely be uncertain how much "puffing" there is in other areas. Meaning, once I saw a silly skill such as "emotional intelligence" I would entirely dismiss everything in that area.

10
Is having a skills bar chart on a resume a good idea?
0
How to make clear the intent of résumé status bars?
4
Should I include experiences as a freelancer on a resume? If so, how?
0
How to add ability to scale your skills in your resume/CV
3
How to style links on a resume/CV?