What is the difference between brightness and luminance? (HSB vs. LAB)

I've read this short article on xrite which claims that luminance is objectively measurable, while brightness is subjective.

From what I understand from the article, since luminance is measurable in candela/square meter, it's possible to get consistency across monitors that are properly calibrated. While brightness is measured in % and differs from monitor to monitor, so 70% brightness would be different across monitors, even if they were calibrated.

That said, is this the only difference? Specifically, do they have different effects on colors?

user287001 answered on a technical level much better than I would've known. My answer is going to be brief and focused on what the main difference is that I see in a practical application.

HSB is not a color mode

That bares repeating now, HSB is not a color mode.

HSB is simply an alternative way of looking at the RGB color mode. But its not its own color mode. You can't go to Image Mode and change it to HSB. You will never see the Channels defined as HSB.

On the opposite site Lab is a color mode and you will get separate channels for each. 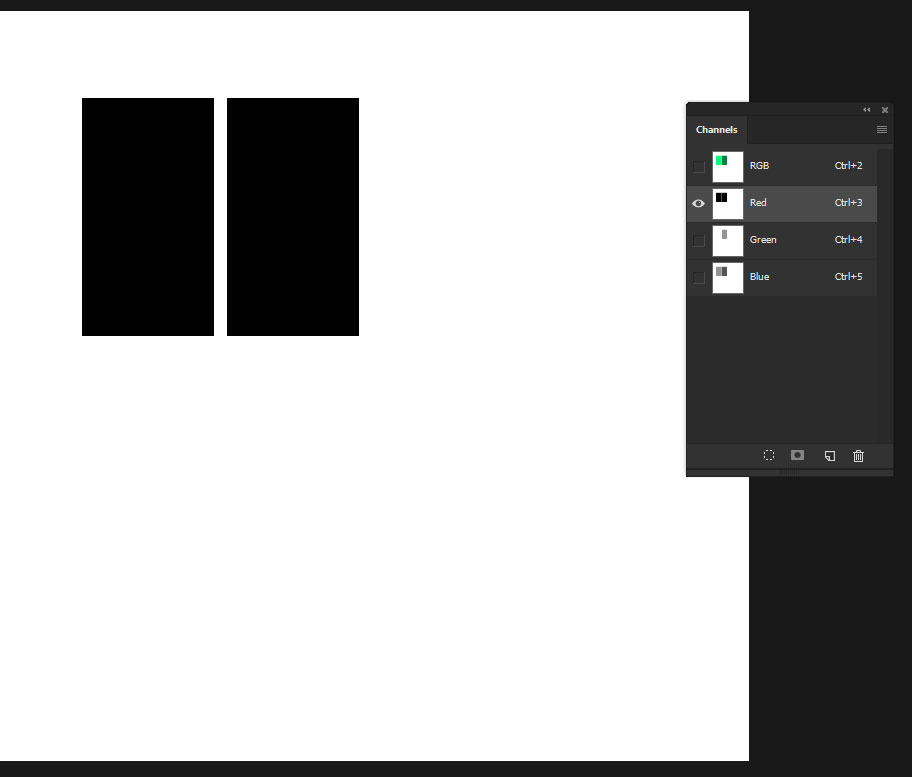 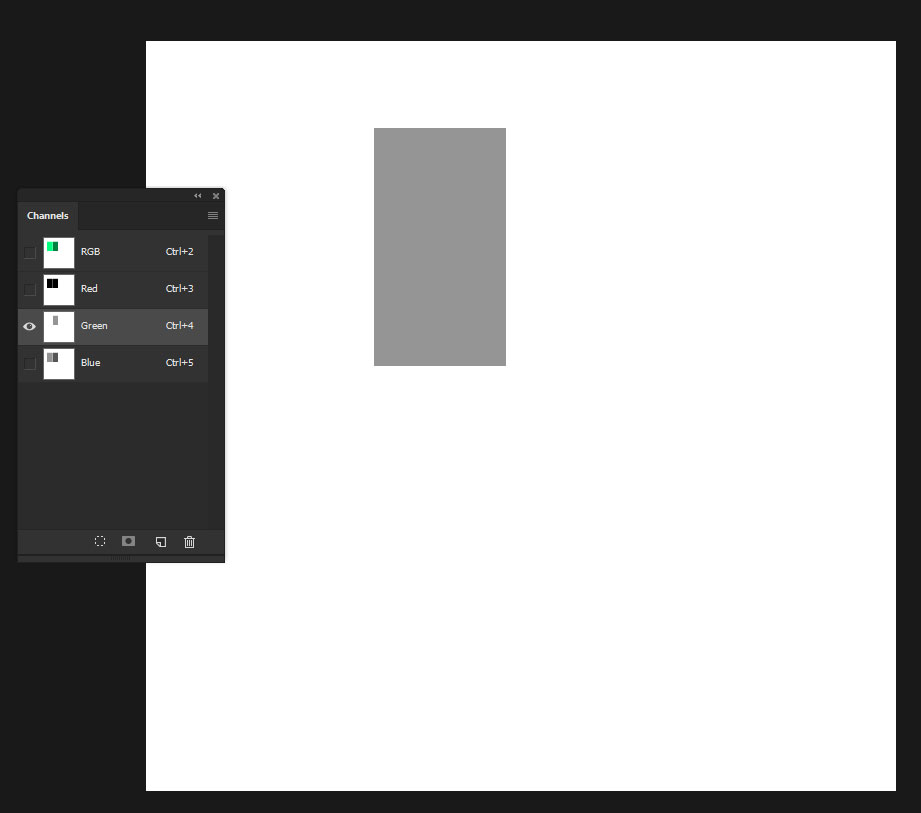 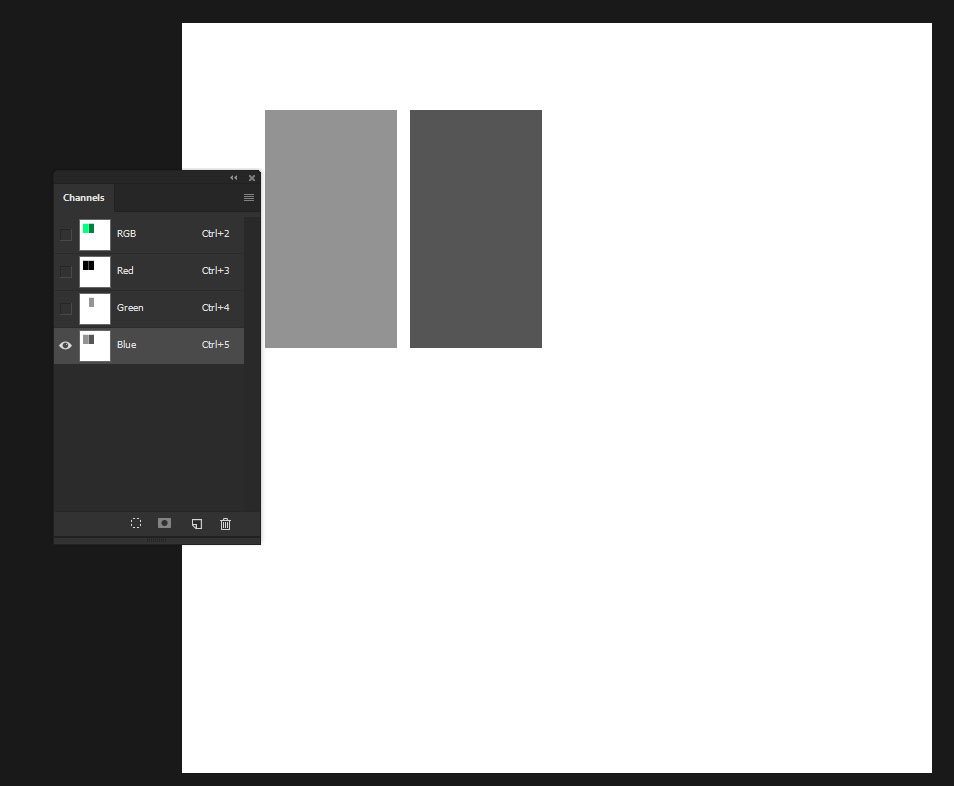 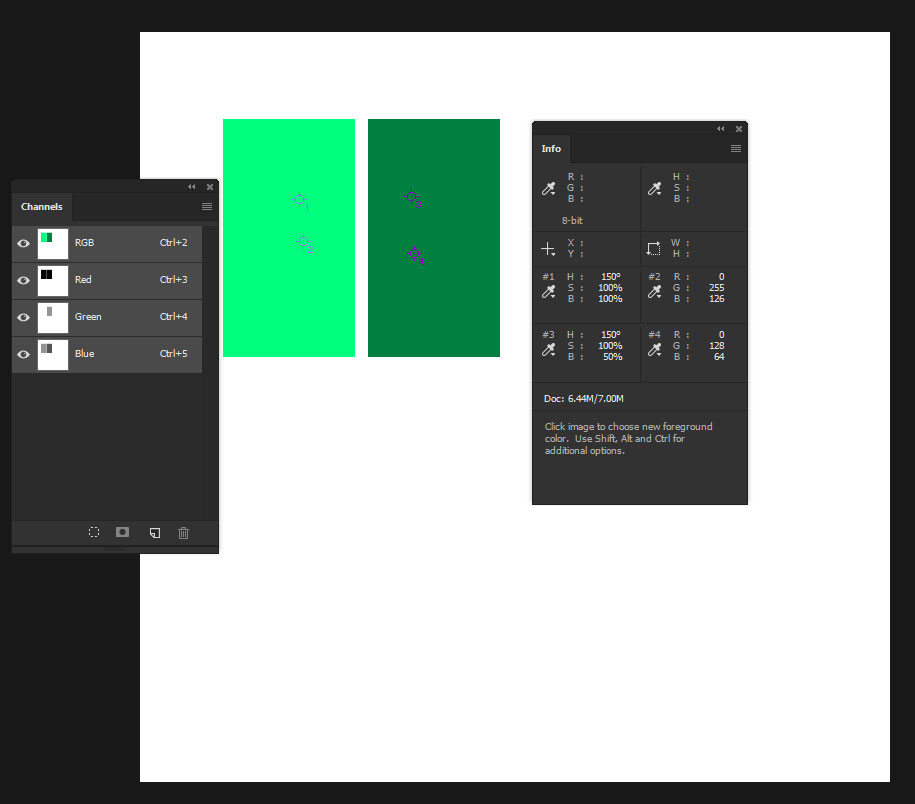 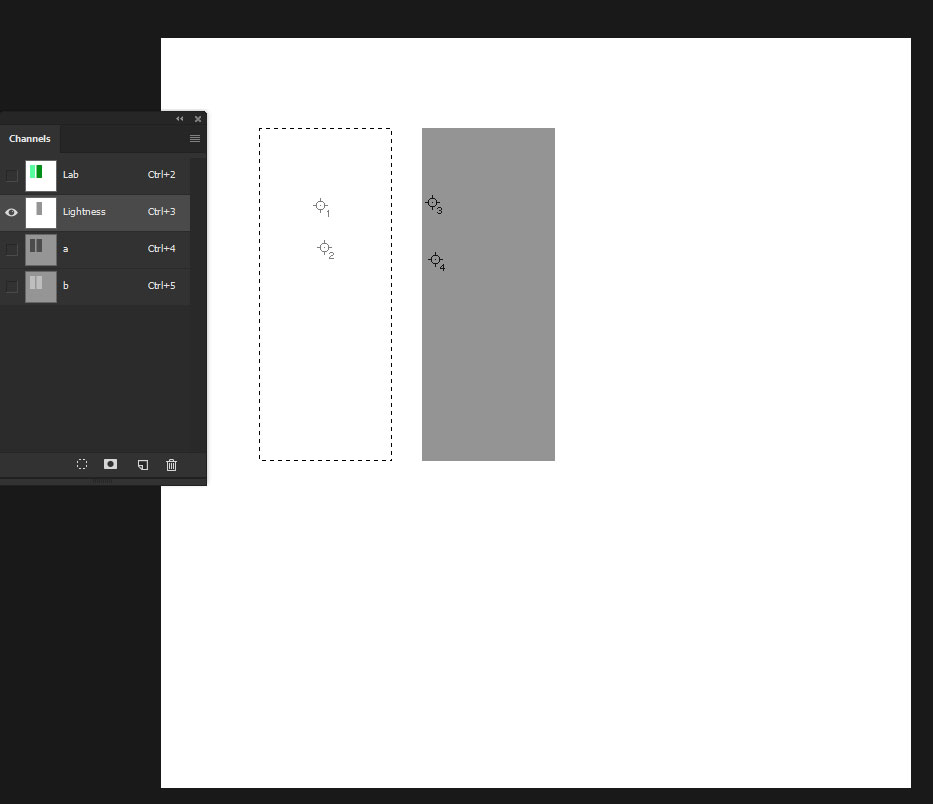 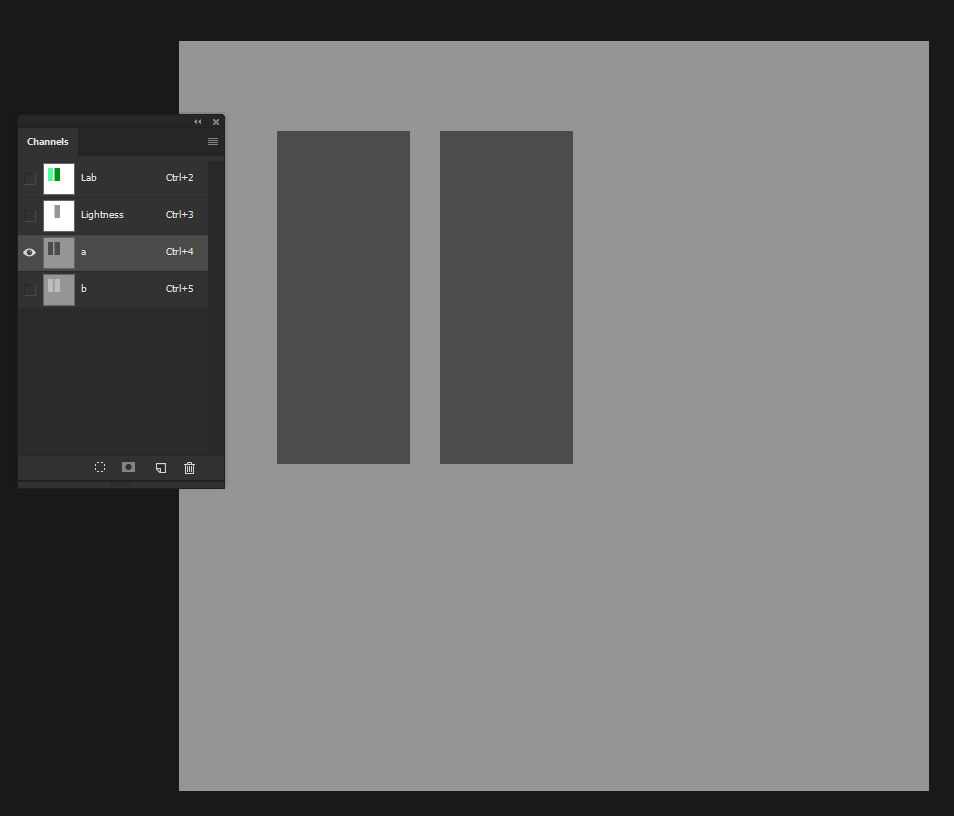 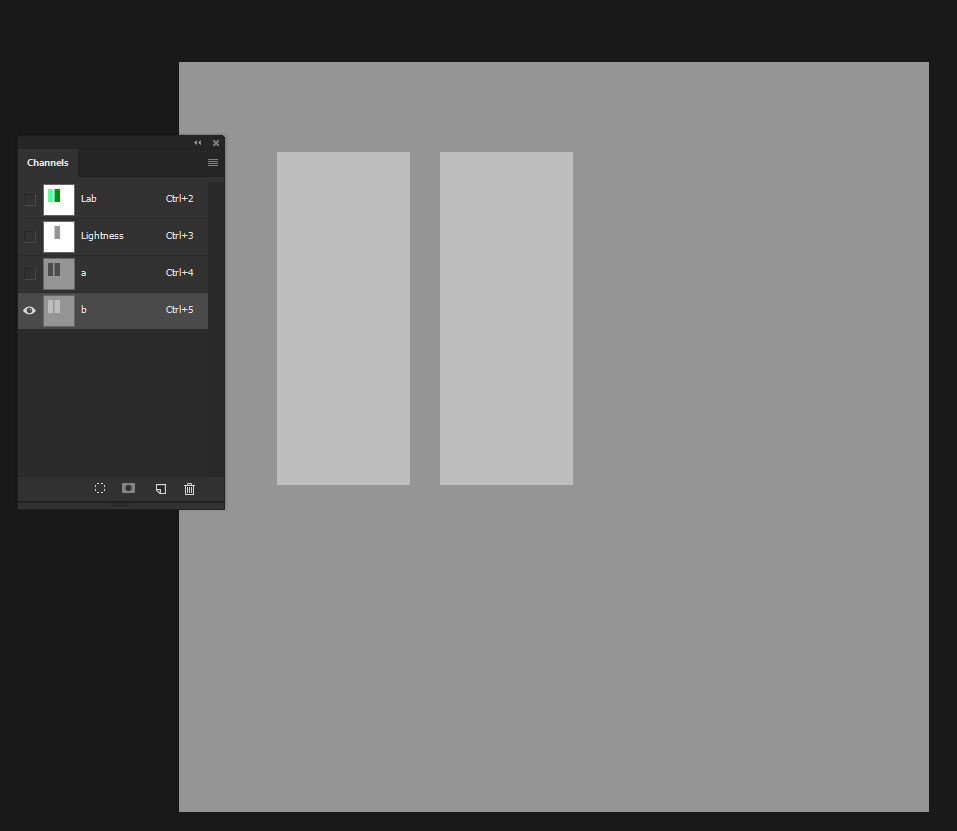 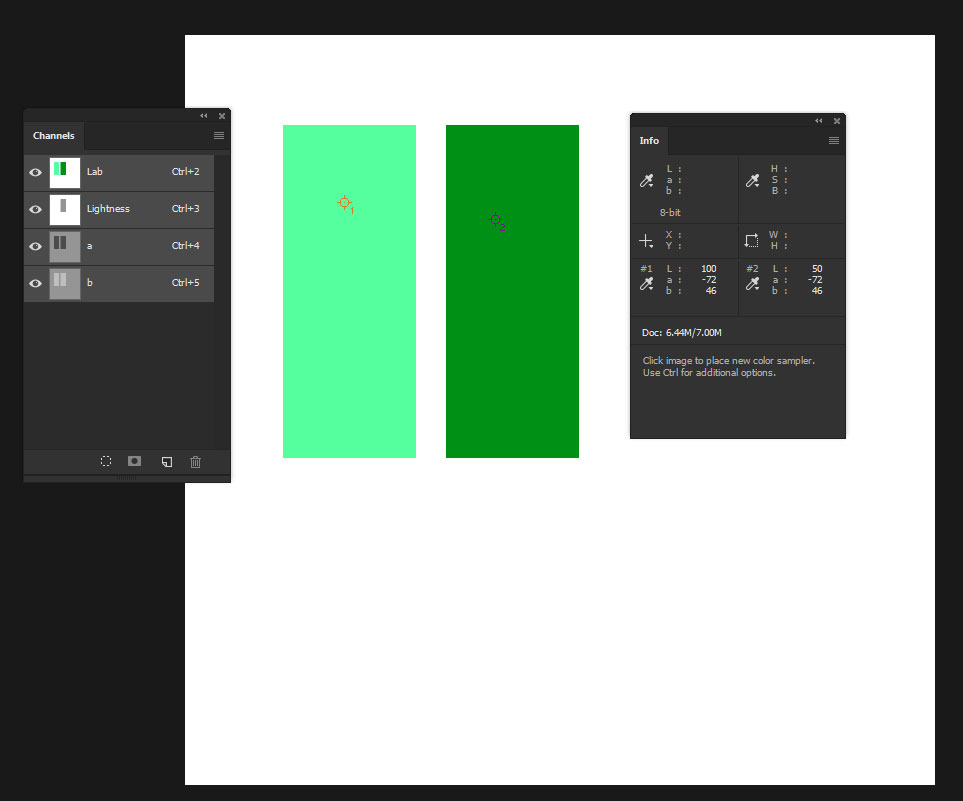 Notice in looking at the a and b channels the two squares are identical. This is confirmed in the info panel. Adjusting the Lightness didn't alter the color at all.

My point being the two aren't really comparable. Brightness and the HSB is a way of explaining RGB differently. Lightness in LAB is an actual color mode that gives you different channels. The Lightness channel as you see doesn't shift the Hue at all because Hue only reside in other channels. The Brightness however as you can see in the 4th screenshot did shift our colors adjusting the amount of Green and Blue.

HSV is an alternative numbering system for RGB colors in computer software. Photoshop uses it, too, but V (=value) is named B (=brightness) in Photoshop.

V (=Photoshop's B) is calculated from RGB numbers with the following formula:

Computer screens have an adjustment named Brightness. It affects the amount of light produced by the backlight of the screen or it modifies the apparent brightness with some other method. The exact method and how it is presented in numbers is proprietary. Thus it's useless to compare brightness settings between screens.

More: As soon as one modifies the brightness adjustment of their display, they ruin its color calibration (if it was calibrated).

CIELAB color system (=Photoshop's LAB) uses L, which is often said to present perceived lightness. But it's not absolute, it's compared to a standard illuminant. That illuminant isn't absolutely fixed in the CIELAB system, but one used is named D50, which is an attempt to simulate diffuse daylight at certain conditions.

I have read from several sources that Adobe uses D50 as its reference white in Photoshop's LAB color mode. This is one of the sources: http://www.color-image.com/2011/10/the-reference-white-in-adobe-photoshop-lab-mode/

L=100% means the color is seen by the assumed standard watcher as bright as D50. It's not direct sunlight, it's more like what's seen in the sky near the horizon in the middle of the day.

If one gives certain CIELAB color numbers, he assumes certain color and relative lightness. A computer+program+display can produce that color if it's possible to produce in that system and the system is properly calibrated, but the meaning of the numbers LAB is known as soon as one knows the used standard illuminant.

RGB numbers or their equivalent HSV numbers mean a certain color only after one has also specified the used RGB implementation (sRGB, NTSC, Adobe RGB etc...). So, if you have two monitors which are both calibrated to show for ex.sRGB range absolutely right, you can believe both of them show sRGB range in the same way.

Not the answer you're looking for? Browse other questions tagged color-spaces hsb or ask your own question.

9
Convert to four hues while preserving values/brightness in Photoshop