How can I improve at drawing calligraphic font glyphs 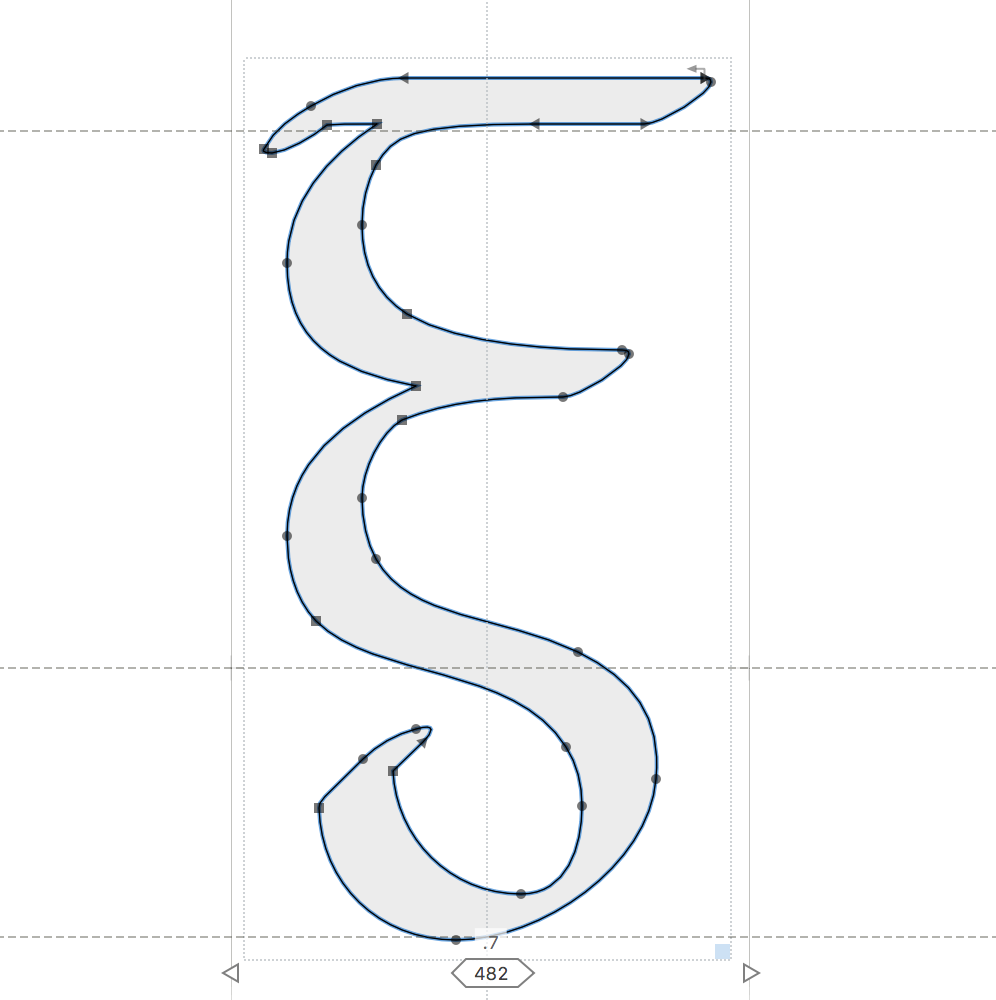 You'll notice a few things about it:

Of those 4 things, it's been hard for me to find a tutorial that teaches you how to "get good at" designing a good looking glyph whose continuity is continuous rather than discrete primitive geometric shapes, whose style is calligraphic, whose segment alignment is non-uniform, and whose consistency is present. Pretty much every video and written tutorial either (1) assumes simple geometric shapes make up the glyph, or (2) that you are tracing a handwritten font (which ends up looking not even close to as good as a well designed natural font like the glyph above, they're always way more "hand-drawn" looking).

None of them describe the in-between.

How do you draw such a glyph as this?

Do you draw it on paper and trace it? If so, how do you go from the inherent ugliness/sloppiness of a hand-drawn sketch, to a smooth and consistent (across multiple glyphs) design? I know there are smoothing tools but it's not that simple. How deep do you need to go with the pen tool. Are you manipulating the bezier curves directly? Or is there some secret technique for adjusting the look of the "fill" in your glyph until it "feels right". If so, how do you do that quickly?

Right now basically I start with a blank canvas and the pen tool, and a hand drawn sketch off to the side. I try and recreate the sketch with the pen tool one painstaking point at a time. But it's not intuitive enough to really be able to concentrate on capturing that calligraphic, non-uniformly aligned effect that makes this glyph look so good and natural. What I end up creating looks like some janky primitive randomly-jolting-around curve or line chain with different bumps and such that don't make any sense and doesn't feel or look good.

So while there is a lot here on the surface, what I'm really trying to get at is how you learn to get good at drawing font glyphs, and what you need to be doing along the journey.

In my head I have a pretty clear vision of what I want the end result to look like. That is, I can find what I'm looking for if I browse long enough through font design inspiration, or if I don't find it, I know still what I'm looking for. I can even somewhat draw a rough sketch of what I'm trying to accomplish using a pen and paper....

However, when it comes to jumping into the vector editor, I feel like something is missing. I feel like I'm trying to build a house with a plastic hammer and nails, while I really need a whole garage full of machinery. What do I need to do to get good at drawing font glyphs? (Specifically in Illustrator).

You need to learn the pen tool. [Period].

There's no details, there's no meat on the bones.

Instead, go into some detail, and it will help not only me but the next person who tries to get into font stuff. Write something like this perhaps:

The secret is you need to master the Wacom tablet, and these 5 tools: 1, 2, 3, 4, 5. But how do you do that? When you start a glyph, you need to be thinking about where the end point is that you're drawing. You need to visualize the curve in your head, the bezier curve, and know the math behind it. You then slowly move your wacom pen to adjust the further control handle of the bezier curve, and switch back and forth between the control points until the first step of the curve feels right. Sort of like sculpting. Then ... more and more details to help get into the mindset of the expert font designer.

Something like that would help me get into the shoes of the expert and know what to look for, what personal goals to set for myself the next glyph I try to do.

It's important to find common elements to only design them once and implement them in the characters with repetitive features. As an example, in the case of the Latin alphabet, the unions between straight and curved strokes of n, m, u, a, b, d, g, h, r can be simplified in a common feature with formal adaptations.

In the image of the question, it's clear that the vector design is based on a handmade brush stroke. The endings give the pattern of the tip type of the writing element (red in the image below). Taking this reference, in any vector program that allows to create a calligraphy brush, Illustrator in this example, you can emulate the brush tip: 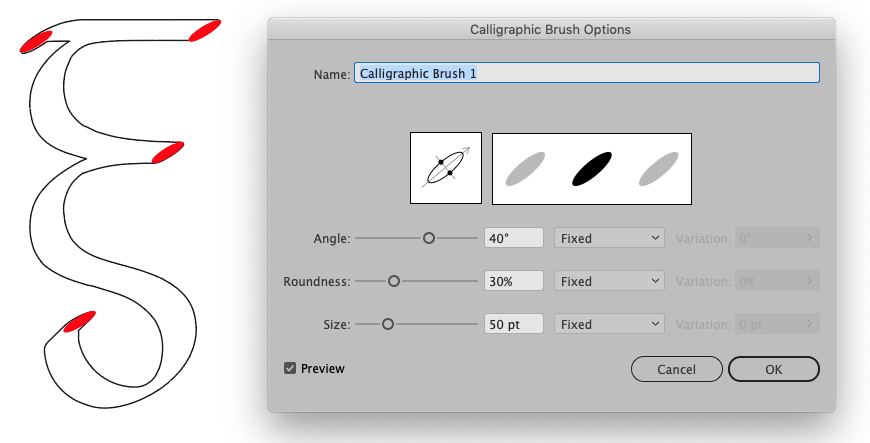 Starting from the character structural axis (blue in the image below) a base character form can be created using this calligraphic brush: 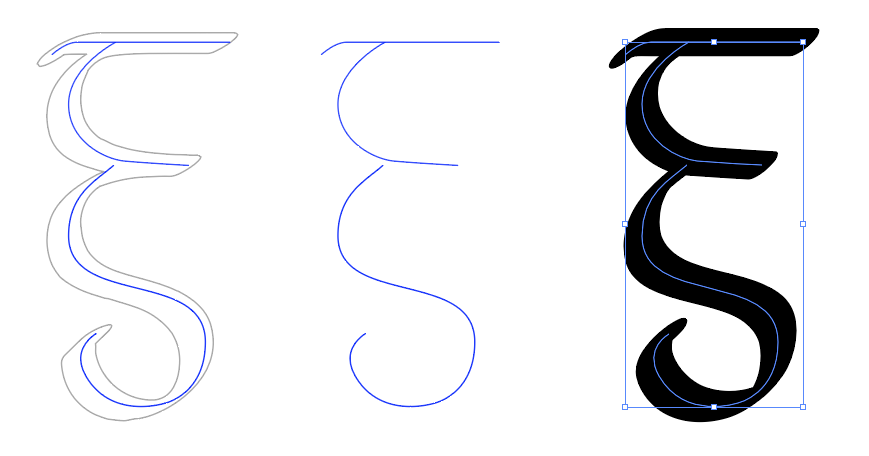 When expanding the stroke the result is not very clean: 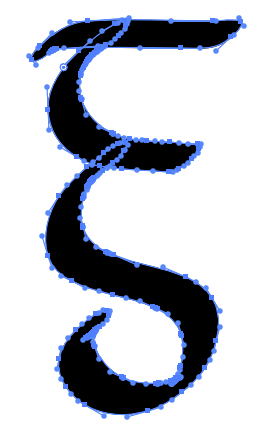 Here is where the work of design adjustments and character optimization begins. Using guides, the Pencil and Smooth tools and an extreme zoom of each stroke you can redraw and clean the most conflictive areas:

The advantage of working with a calligraphic brush is that the most difficult areas to achieve, such as changes in thickness in the different directions of the curves, are performed by the application. In my opinion a good starting point to continue with the other formal adjustments.

If your interest is the typography design, it would be useful if in addition to the basic concepts of typography, you get (or study) a good calligraphy base. In this case, the concepts may be easy to learn, but the implementation takes time.

6
How to know which of my fonts do or don't support certain glyphs?
3
Central, simplified, "pen" strokes of a font glyph
0
How to Create Compound Characters Inside a Font
4
How do you create alternate font glyphs/characters?
1
How to get font glyphs out of OTF/TTF font and into Illustrator
4
How can I continuously transition between a monospaced and a proportional font in text?
3
What is the maximum number of glyphs a TrueType font can hold?