Setup GREP Style to move numbers to next line InDesign

I'm working on typesetting a book in InDesign that has verses. Each verse starts with a number. The numbers can't be at the end of the line as it is the beginning of the text on the next line. I learned here that GREP styles would be able to do this. I just don't know how to set up the grep style to find the numbers and move them to the next line.

Here's a sample block of text with the numbers in question highlighted: 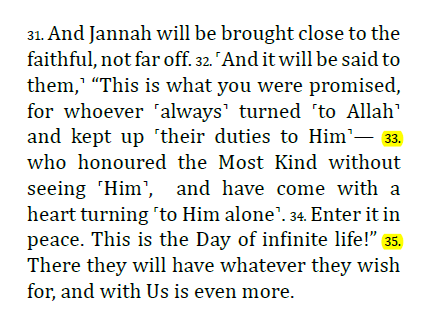 Also, a side question - would it be possible to apply a character style to a specific type of text in InDesign using GREP? I'm currently applying character style manually to each number :|

Grep styles are designed to apply character style to a specific pattern. They don't allow you to replace a character by another one. In your case, you might think that you should replace the normal space after numbers by a non-breaking space (NOT a hard return!).

But you can create a character style in order to format your numbers, the dot and the following space and set the whole thing as "non-breaking":

could do the job. Be aware this regex will apply the grep style to all numbers if followed by a dot and a space, so be careful.
If you don't want the space to be styled like the numbers (smaller font size, background color, etc.) then you'll need to create 2 characters styles: one for the numbers and the dot, and one for the space (if preceded by number + dot).

Grep are great but very picky, so it's almost impossible to give the perfect answer without seeing the entire design.

Not the answer you're looking for? Browse other questions tagged adobe-indesign typesetting paragraph-styles grep character-styles or ask your own question.

2
Get the start and finish of text in a certain character style in Indesign GREP
0
How to make GREP match everything between two markers, regardless the Forced Line Brake occurance
1
GREP - Apply Character Style until carriage return
1
In InDesign, how to get rid of the First Line Left Indent after a "mid-sentence" Frame Break?
2
InDesign Next Style not applied when pasting text?
6
InDesign: grep style to move single i words to next line
2
inDesign GREP styles
1
InDesign: Using GREP to style URLs, email addresses, phone numbers, social handles, and hashtags
0
Indesign GREP capture only next line