Screenshot taken from a popular game (LetterPress), where a user has his name in a right-to-left script (which looks like arabic). 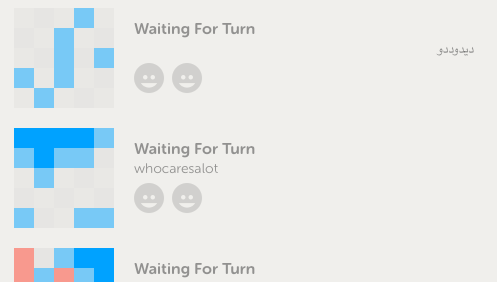 This typesetting is clearly surprising, as the name is out of line with other usernames (e.g., “whocaresalot”). However, I can see the logic at work behind it… So: what are the general rules guiding typography of right-to-left text in a left-to-right context?

I think the general rule is to communicate clearly.

This website handles it rather ugly. Even though I read the post, I still had to look for the name.

Aligning the name to the left side should be okay, because in this context you are expecting names to align to the left. Suppose left-to-right text was aligned to the right on a Hebrew page; it wouldn't be such a big deal.

If they really wanted to align the name to the right, it might have been better to set the containing div to a fixed width, so the name doesn't jump to the other side of the screen.

I'm not a fluent right-to-left language speaker, but the general rule is, each chunk of other-direction text sits in the flow of the document where same-direction text would be, but oriented its own way within its own inner content.

The easiest way to find examples is to go to major Arabic or Hebrew websites that include a large volume of content about English / Western topics, therefore, plenty of snippets of correctly-formed opposite-direction text. These are more common and less frequently quirky than Western sites trying to accommodate Arabic/Hebrew/etc.

For example, here's the Arabic Wikipedia entry on the US sitcom Two And A Half Men: http://ar.wikipedia.org/wiki/Two_and_a_Half_Men You'll note that:

So as a general rule, not just for text direction,

There's one possible exception where I'm not totally clear and where, from sites I've seen, there seems to be some inconsistency: the alignment within the text of other-language full-width multi-line block elements (e.g. block quotes).

Again I'm struggling to find good examples, but from memory I'm pretty sure that, on sites where other-language, other-direction blocks are rare exceptions in unusual articles (e.g. blogs, news sites where the original language wording is important to the story - rare cases), their inner text is aligned to match the master language and follow standard styles, breaking the above rule. Where they are a major part of the content of the site (e.g. a language learning site, or an English site about the Koran where most pages include many block quotes in Arabic), they more often have their own style which includes alignment as per their own language, as per the above rule.

Basically the rule if there is one seems to be a pragmatic one: are X language quotes a sufficiently important regular fixture on this site that they are a common type of content needing its own refined, perfected style, and where it's worth sacrificing a little consistency to maximise their readability and conventionality? Or maybe (perhaps more likely) it's just not really been thought about at all in the cases where it's an occasional anomaly, and so the style is just the default output. Just an observation.

If they are on a website that reads left-to-right, then things should stay left-to-right. Visual consistency is important. I didn't even know the first one had a username to it, because of the lack of consistency.

You could do something as Maarten suggested, which is to align it to the right within a smaller div. But to be honest, even if someone is reading right-to-left, if they are on a left-to-right website they should expect things to be left-to-right.

I don't see the purpose of a website that has some elements that read one direction, and other elements that read another way. I think everything should be left-to-right or everything should be right-to-left. The exception would be if you had, let's say, a block-quote or something similar that was in a language that reads right-to-left, then it would be appropriate to change your formatting for that one element. But generally you shouldn't even have multiple language on a page unless it's for educational purposes or something similar.

If the item in question is just a username, then it wouldn't make a bit of difference where it was aligned. I can just as easily read text aligned to the left or right of my screen.

7
Proper typesetting guide
6
Arabic website - design for right to left languages
1
Indicate that text is a proper noun (such as a product name)
4
How do you force right-aligned paragraph text to respect trailing whitespace in illustrator?
1
Animation (Adobe After Effects): Text rotating around object with proper "3-dimensional" perspective
2
Formatting: left aligned vs. justified body text?
1
How do I make a hanging indent on right-aligned text in InDesign?
15
Has there been any significant scientific research on the readability of flush left text vs. justified text?
5
Typographers' "canon of exemplars": What are some books that typographers think are examples of great typography?