What's the term for text around and across a circle?

What's the term for text that's both in the shape of a circle and across it?

The Creative Commons Free Cultural Works seal, pictured below, is an example of this. 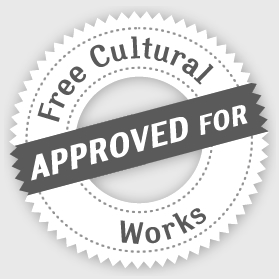 The Creative Commons Free Cultural Works seal. By The Noun Project, I think, and licenced under CC BY 4.0. Content unmodified.

(Note that this is not intended to violate the terms of the "Creative Commons is not a party" paragraph. If it is deemed by the appropriate bodies to be an infringing use of a Creative Commons logo, let me know and I'll find a different example instead.)

Edit: I'm talking about an element that has both

These have the convention—and distinction—of being read front-to-back rather than top-to-bottom.

You used it in the question... "Seal"
Like a notary seal or a government seal
i.e. the "Seal of the President of the United States".

In some instances if the banner across it is wider
than the seal itself, it may be referred to as a "cigar wrapper".

And much the thesaurus uses would also work....
emblem, stamp, icon, symbol, marker, insignia ...
...depending upon the actual design.

Depending upon usage, it could be called a "burst", a "callout", or a "bastard element".

It's very subjective. I don't think there's a hard-and-fast, one-size-fits-all, rule as to the terminology. "Seal" is the most prolific and intuitive for an overall circle shape.

If reference is requested, the Meriam-Webster dictionary defines Seal
states under Legal Definition 1....

: a device (as an emblem, symbol, or word) used to identify or replace a signature and to authenticate (as at common law) written matter

a piece of wax, lead, or other material with an individual design stamped into it, attached to a document to show that it has come from the person who claims to have issued it.

a stamp, medallion, ring, etc., engraved with such a device, for impressing paper, wax, lead, or the like:

None of these are specific to a circle or type placement. The circle itself and placement of type is merely a subjective aesthetic choice. Art, in general, does not always have exact terminology based upon some specific placement of some specific element, such as text.

Think of the term "poster". That term alone could define myriad designs from tall and thin with text vertical to short and squat with no text at all...but they all would still be defined as a "poster".

The word you are looking for is Circumlocution. From circumference and locution. Or " words around the outside of a circle."