What are the eyes of this character doing?

NOTE: I have read the Help Center guidelines for asking questions, and did not find anything against character design help. This is my very first question here on Graphic Design SE, so if this is not the proper site for this question, please help me migrate it.

Whether you think it's cute or not is irrelevant. What I'm trying to do is figure out exactly what is being represented by this face, so that I can give the face different expressions without ruining the "feel" to the character.

After spending hours messing around with it, I have concluded that the character is "winking" in the original image above. See the following:

This face gives me the same feeling as the original face, but the eye on the left is vertically larger. This means that the difference in eye size is not something integral to the feeling of the character.

My main problem is due to the open boundary for the eyes. Because it is an open shape with little detail, I'm having a very hard time deciding what truly defines them. I tried closing them, and the result look like the following images:

None of these images look right to me. I've tried experimenting with:

I just can't seem to figure out exactly what this character's eyes are doing.

What I do know:

The mouth is not the focus of the question.

What are the defining features of this character's eyes?

I can't draw it in different poses or angles and give it different expressions unless I can figure this out.

UPDATE: To provide more context into the character, it is a smiling cloud in the sky. It is innocent and cute.

Beyond which is the gesture the character has, the point is to find out what is the drawing technique essence and from there start developing the character and understand what's the visual perception it transmits. There are several formal exercises you can do, at list in a formal perception way, here some of them.

Here's a boat with a sun and a bird, what's the formal element that unifies them? 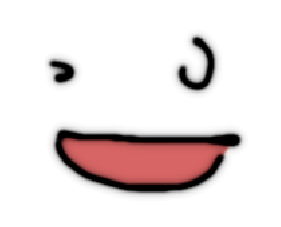 These are three characters of a hieroglyph, what's the common unifying element?

This will make you understand the relevance of each component.

A boy with a cap whistling: 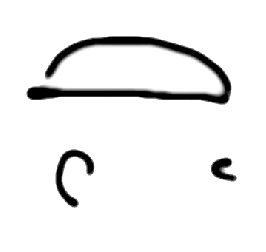 A man with a bow: 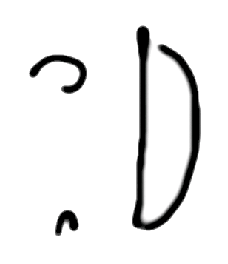 Defining a gesture without its context can induce to stereotyped images. This is a character running: 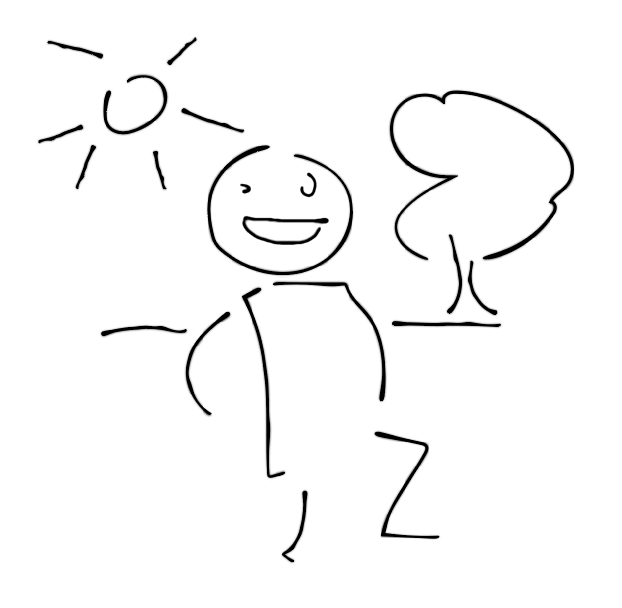 Describing each of them helps to understand which one is in use and what it represents. Example: image with strokes, with filled shapes, with regular and irregular strokes...

Apply the same drawing technique to other shapes

I don't think you can understand what a stroke conveys without previously understanding the stroke itself: it's almost impossible to understand a universe with only three elements. Try to create a hypothetical alphabet using the same stroke style as the illustration, in this way you will understand which ones are valid and which ones are disposable and consequently what each stroke can convey alone or combined.

At first: It's well possible that you are exploring new waters far beyond the beginner level. If that's the case skip this and let me apologize.

Something for beginners: Sending and receiving data via facial expressions has been essential for Homo Sapiens. It's all about how to survive, so also sparse information is automatically taken into the account. Many people can see faces in nearly anything without having a mental illlness.

Do not skip the mouth. It's as essential as the eyes. The decision of the mental state of your shape needs both. If you want to focus to the eyes, make the mouth less expressive, for example let it be a horizontal line. Now the mouth presents good mood and everything what the eyes do should fit or the interpretation is "do not trust"

I wrote "mental state" because it's something which regulates the actions and gives a possibility to predict and understand them better. That's a key factor in surviving among other people. In addition a consistent story of a person needs information of the mental state, a list of actions isn't enough.

The eyes really should have outer border and the pupil to reveal the direction of the focus. That outer border can well be an open curve, the eye is closed if there's no pupil. With no pupil the eye is ambiquous, but from large amount of other information one can still decode the meaning. Your few shapes in the question do not give that information. Much more is needed to learn the language.

You have already got a suggestion "draw hundreds of images". That's a good idea. I tried to draw a few, too. I made an assumption the square is the outline of the character. See NOTE1. 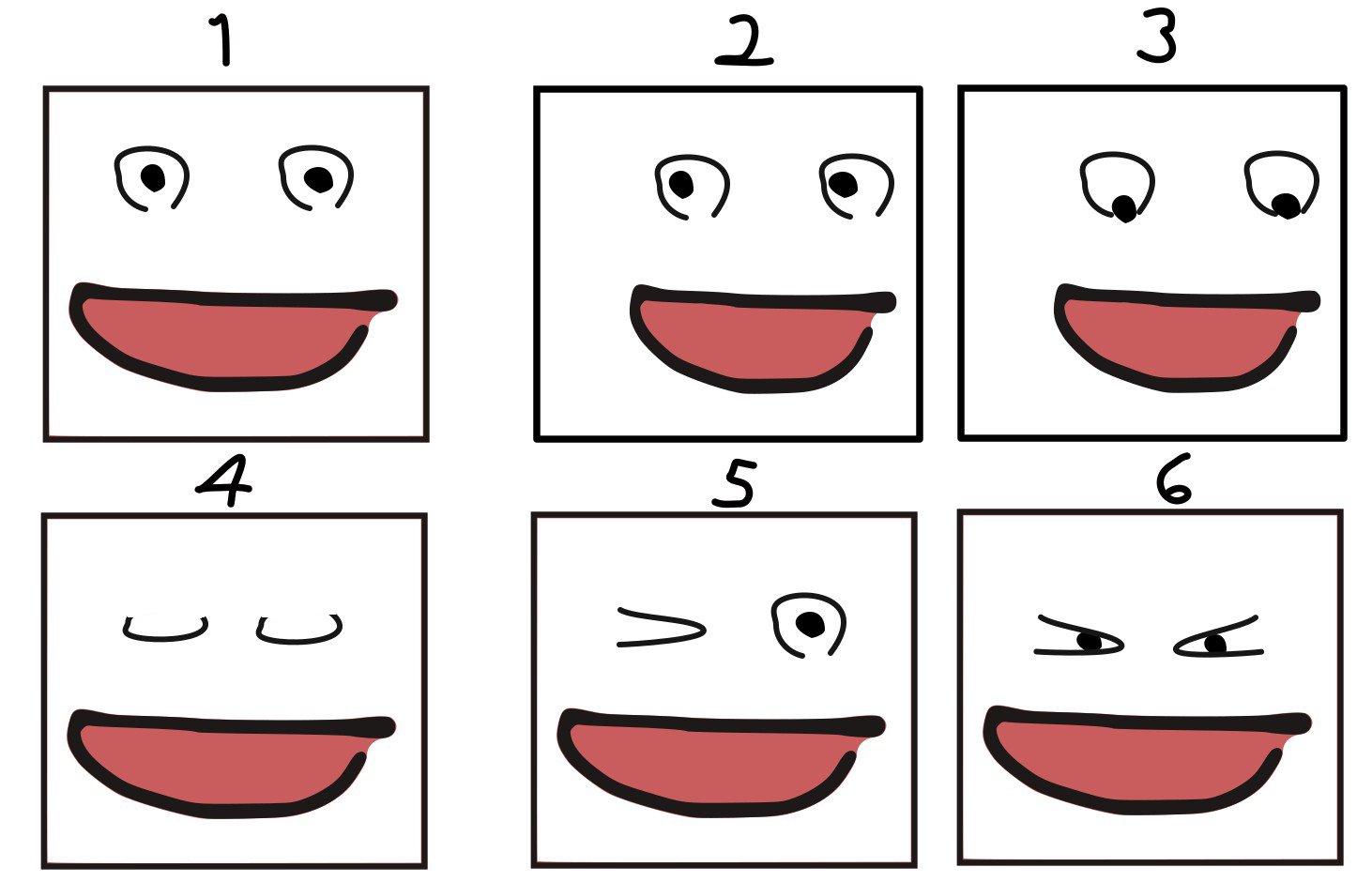 They all have the same good mood mouth. I aimed these interpretations:

You must develop the expression language of your character and make the others to learn it by presenting consistent stories. If you do not use pupils you can still success, but I wouldn't try it. Eye pupils are far too powerful information transfer device to be ignored.

NOTE1: That's my unfortunate limitation, I cannot imagine an individual which is distributed to separated parts with no common outline. I guess you have the same limitation because you have added a comment which tells the squares are the borders of separate images. You must limit the space that one individual can occupy.

Not the answer you're looking for? Browse other questions tagged critique character-design or ask your own question.

7
What is the type of these coarse drawings?
0
Design tips for a web design by a beginning developer
4
Critique Request: CAD drafting contractor logo
8
Critique: logo design for an engineering company that makes machinery
0
What is the name of this kind of character illustration?
0
Save the animation process of a character for another character
1
How to display better a product on a outdoor photo, without making it look childish and unrealistic?
0
What steps I can take to make this banner less crowded or with more empty space?
6
Critique request: Vtuber logo