I want to draw my own diagrams of functions such as the following: 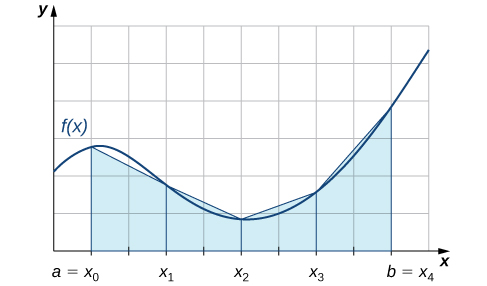 What is a good software I can use to draw my own smooth free-hand functions and add shapes like rectangles to represent areas?

It would be easy to say "draw in Microsoft Office Word or Powerpoint or take a rival freeware for ex. Libre Office Draw". In theory the suggestion is good, because all needed elements (=lines, polylines, rectangular boxes, arrows, freeform curves, circles, textboxes etc...) are there. In addition you can build readable math equations with common symbols.

BUT: just drawing math illustrations is a nerve cracking job in office software because you cannot place items easily. Try to draw a new line via the crossing of two curves. It simply refuses to snap. You can turn all automatic snaps OFF and zoom in to the maximum. Then you can get an item placed so that with normal zoom the result is acceptable. Aligning everything with an underlying grid helps in some cases, but this problem stays.

General vector drawing programs are less resistant. But you must have a week for climbing over the first steps. Without patient studying and practicing you'll get nothing but a mess. The next drawing can be done with Inkscape (freeware) in few minutes if the basic tricks are learned properly. There's used no underlying grid for snapping and all blue polyline corners meetthe red curve exactly. 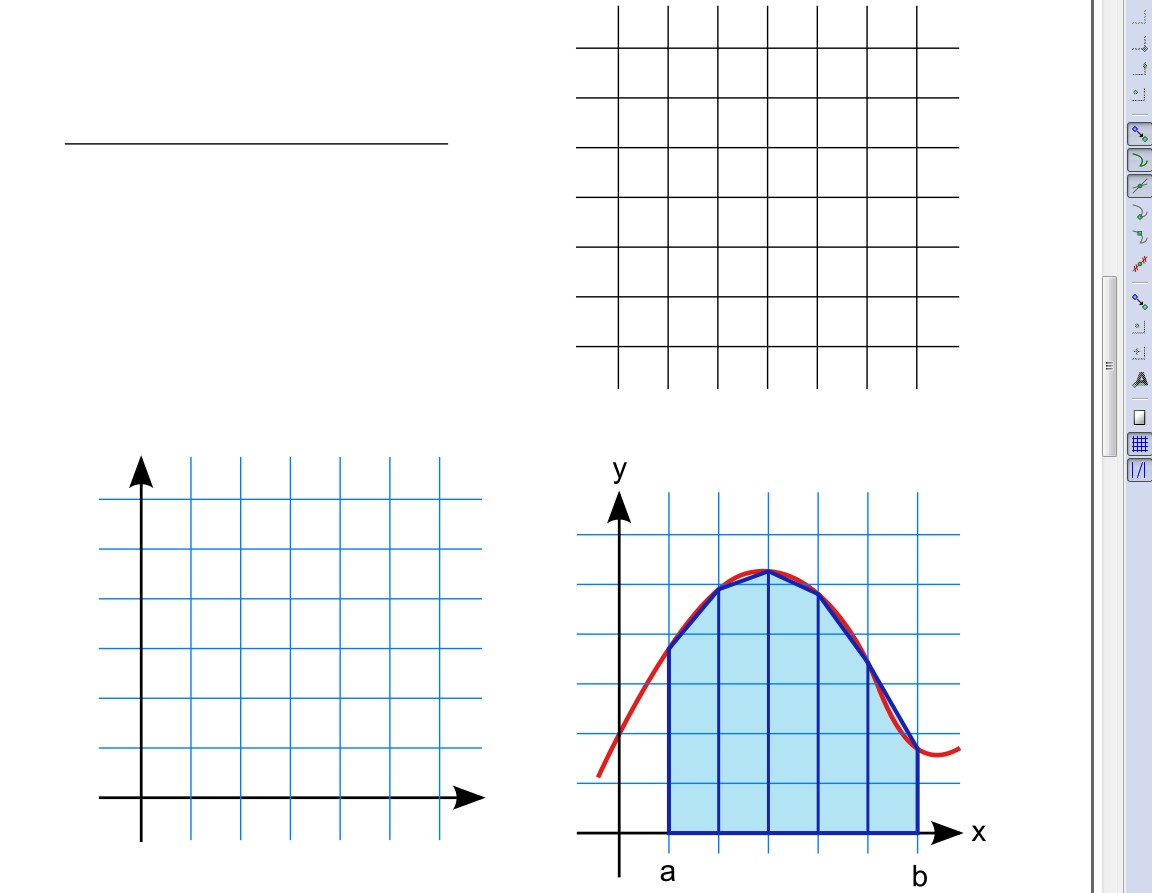 Adobe Illustrator makes the same and can be considered to be more effective than Inkscape, but it costs money. Inkscape's special strength are the numerous included path functions and extensions which make useful things such as draw numerically exact curves, you input the needed expression. But Inkscape is created by an army of voluntary enthusiasts which quarantees somehow splintered user interface if you use all those extras. The basic drawing process is developed to a coherent state.

I have recently found a commercial but low cost drawing tool which helps in creating math illustrations: https://mathillustrations.com/index.php The product has been around a long time. Drawn image can be copied and pasted directly to vector drawing programs such as Inkscape. Only apply Extension > Arrange > Deep Ungroup and the result is as editable as drawn from the start in Inkscape. The next screenshot is a pasted image which is taken under edits in Affinity designer. A side of a polygon is crunched to a freeform curve: 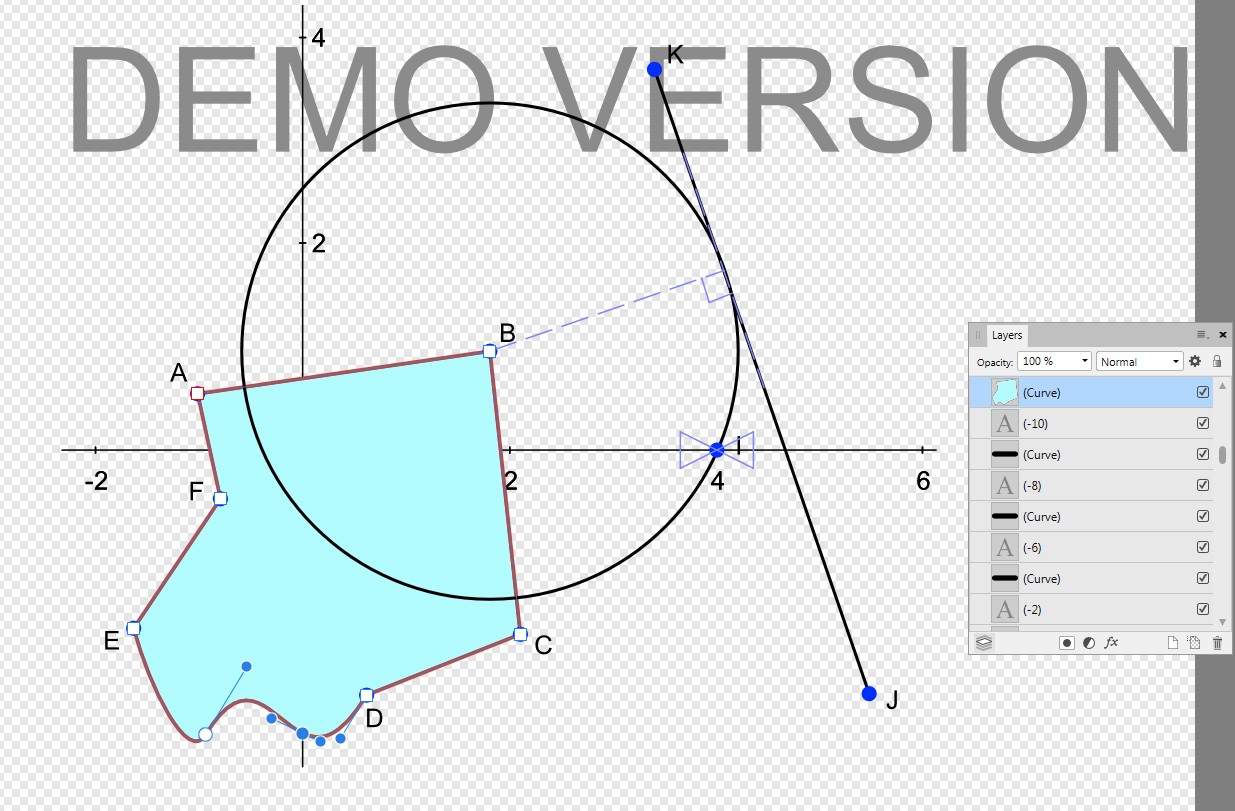 Suprisingly pasting to Illustrator gave a directly editable image without a need to ungroup.

MathIllustrations is useful as well for MS Office users, because a pasted or imported image is also there an editable vector, but editing is even more painful than drawing in office programs because the pasted version is obviously a Windows metafile which has no curves. A circle for ex is a 100-gon. In Libre Office the result was the same.

I guess no single drawing tool alone is satisfying. Sooner or later you'll need also standard math style equations and numerically perfect drawings. I suggest you try to get Illustrator for drawing, a tool for making and pasting or importing numerically exact drawings (see NOTE1), a CAD extension to Illustrator to be able to draw easily normals, tangents and tangential circles. You can get math equations from office software quite easily.

NOTE1: There's a comment which suggests Geogebra. It's a very capable superset for MathIllustrations. Geogebra exports SVGs which are editable at least in Illustrator, Inkscape and Affinity Designer. But you cannot copy and paste directly to your drawing except as screenshots. That can also be seen as a plus which forces you to work a little more systematically.

I have worked in a place which allowed only MS Office for all graphic work. Low level workers without academic status couldn't get anything else. So it was ever been there. But all documents were ordered to be computer files. The most effective workaround was to scan or take a photo of a paper drawing. Nobody ever commented not so exact geometry.

You can double check your formula against Wolfram Alpha.

It will also show you a sample graph of most functions: Example for f(x)=x^2

If you get a pro (paid) account with them, they also let you customize and save/download generated graphs.

Not the answer you're looking for? Browse other questions tagged mathematics or ask your own question.

1
BA (Baskerville) Math Font from micropress available?
1
Math fonts available for Mac CS4 systems?
37
Is math needed for graphic design?
3
How do I write this math symbol in Sketch 3?
2
Creating numbering for math compendium in Adobe InDesign CS6
1
What software should I use to create editable mathematical vector images like these?
8
Software for graphing sophisticated geometrical shapes
0
Automatically Insert Ink Traps
1
Finding proportions in perspective