Does anyone knows a good course for depth and shadows in illustrator?

Does anyone knows a good course for depth and shadows in illustrator? I'm searching for an online course for making the character more realistic The left one is how i bought the photo and the right one is how I made it look like, I'm searching for a course to improve my skills and to do more complicated stuff, I'd appreciate it if anyone could send me the link of the course. Thanks all for your time.

There are so much already said by others that I cannot add much. I do not recommend any courses, because you'll find easily tens of free video lessons about the subject. In addition there's plenty of books. 3D-like shading has been an essential skill in painting and drawing hundreds of years.

But I can suggest one thing: Start with simple things.

One could easily think that inserting solid dark and brighter areas for shading is simplest. But it isn't. Its extremely difficult because the illusion of shading needs an intuitive assumption of the 3D form. Solid color shadows and highlights give very little information of curvature. 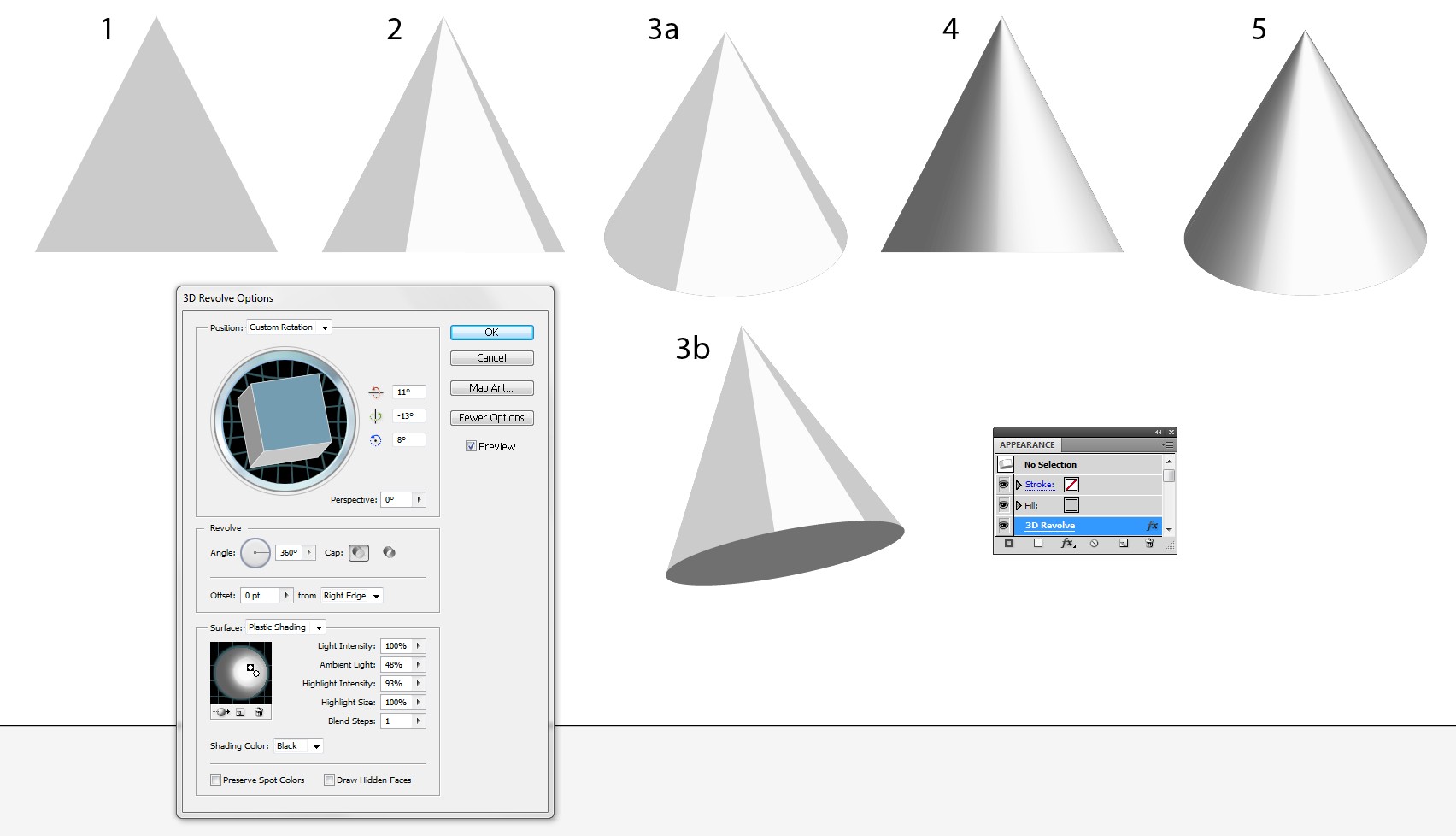 Your cartoon shape can be quessed to be a 3D animal character because such characters are commonly used. But when you have started to insert solid color shadows and highlights for 3D appearance, you have seen how difficult they are to make look right. This is why you are here now. They seem to fit as well as the white in my cone 2.

Actually they probably would look better if they were drawn with consistent light direction idea. And if you had several versions of the shape seen from different directions + preferably doing something interesting, nobody including you, would see no reason to complain of the shading. Drawing enough versions (hundreds of them) would fix the style and you would have developed the needed confidence to consentrate to the story.

Start practicing with the simplest possible way. Draw only darkening gradients for 3D curvature in the shadow side. Solid darkened color presents natural way only a plane. An example: 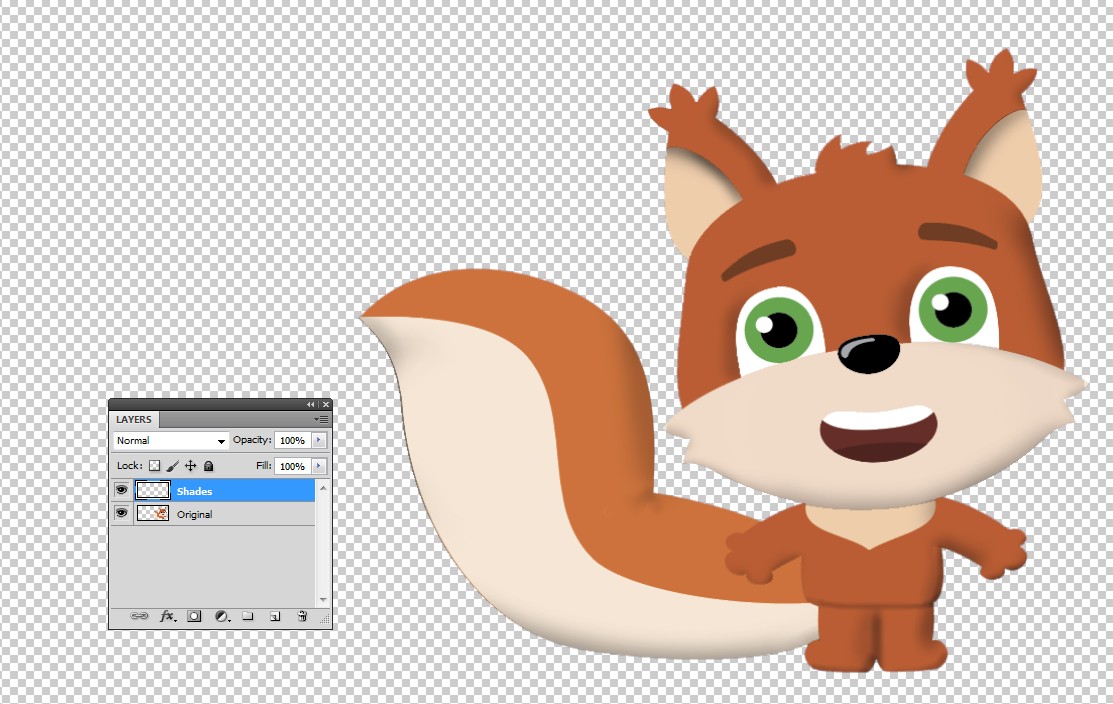 The eyes and the nose have the gloss you gave, but your other shadings are replaced by hand painted gradients. Before it the areas were filled with their major colors.

The job has been done in Photoshop because it's there easier. I had maximally soft black brush with painting opacity about 10%. It's edge leaves a gradient. For fixing I had even less opaque soft brush eraser. I made a colored area selection with the magic wand. The selection prevented painting and erasing over the edge.

Before computers airbrushes were used (and are still used) to create gradients. Making a selection to limit the spread replaces the masks that airbrushers use.

All darkenings were made to a new top layer to be able to make the right selections with the image layer.

The following isn't a link to a course, but hopefully enough to get you started. Rather than an Illustrator specific course you might have more success searching tutorials on adding shading to drawings/illustrations, since it would be directly applicable to anything created using any graphics software. I have found Youtube to be a good source for finding drawing tutorials. This one is rather nice and is specific to Illustrator and drawing cartoon characters.

Since we don't like link only answers here on GDSE, I thought I should share my own experience on a method I have used myself.

To get more realistic shading, you need to think about the light direction, and be aware where both shadows and highlights would fall on a 3D character. Surfaces facing the light should have highlights, and those facing away from the light should be in shadow.

Here's a rough example below. I used Illustrator's Knife Tool to cut up pieces of the design for adding shadows and highlights. I'm sure you get the general idea. 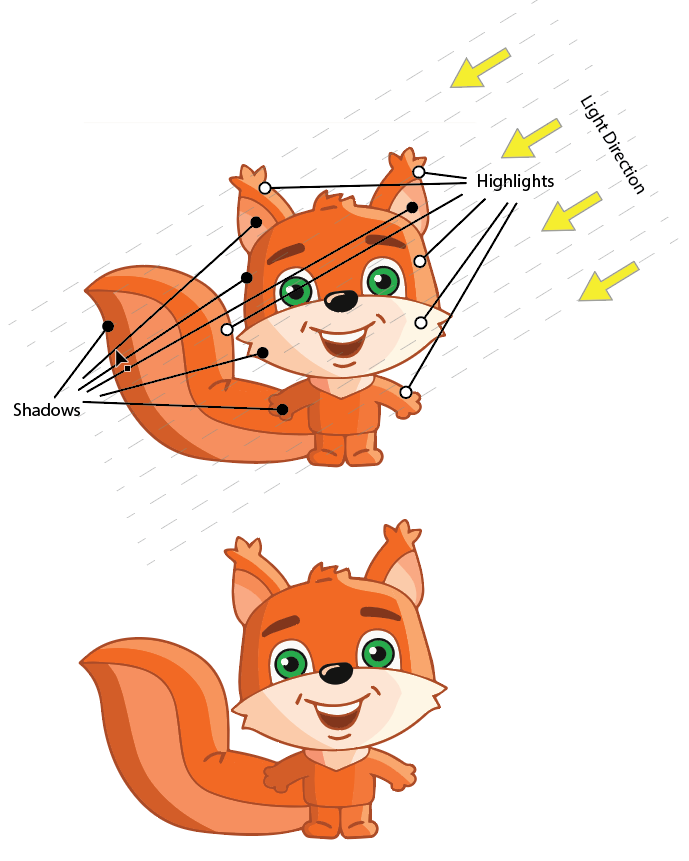 Not the answer you're looking for? Browse other questions tagged adobe-illustrator adobe-photoshop shadows or ask your own question.

3
Compensating for darkening that occurs during lamination
3
How to create a realistic shadow between wall and floor in Photoshop or GIMP?
0
how to make inner shadows on objects?
2
Are there any tutorials on how to emulate MBE's style?
1
How to easily determine shadows and highlights of objects?