Alignment of word mark and tagline

I've done this a hundred times, but this time I worry I am overthinking it! This clients company name happens to be two words of similar width. The second word slightly wider, and it's confusing me as to the best strapline size and placement.

See below four versions, all of which have faults to my eyes. We can eliminate the fourth of course as "silly", but the first the tagline is somewhat small (relative to the wordmark) and the second two suffer from obvious "alignments" with the start and end of words.

Does this have to be done by eye, or is there some kind of grid, or ratio that might steer me in the right direction and break through my block? 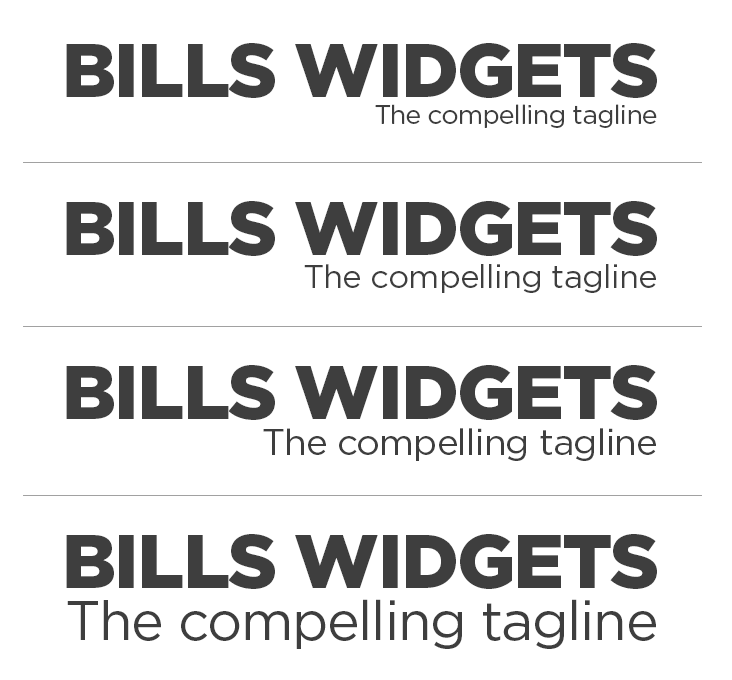 I don't think there are formulas, but some perception theory can help.

Placing some basic shapes on a baseline, this is interpreted as a horizon where the shapes are supported:

The ones that offer the greatest firmness are those which have two support axes perpendicular to the baseline: square or rectangle. These support axes generate some structural lines.

In the case raised in the question there is another element: the text alignment, which creates a third visual component and the problem is where to stop it to create a balanced composition.

By combining the example of the basic shapes and their structural axes with the thrust of the bottom line, we can establish different levels of force.

This is much more understandable by contrast, changing the lower line direction. From left to right these levels totally change and the weakest disappear (would be the case of A, O or V central axes).

From there everything depends on the design guidelines. Personally I would choose one of the strongest structural support axes:

Not the answer you're looking for? Browse other questions tagged logo typography or ask your own question.

9
Connecting A and T in a custom typographic mark
5
Design rule toward Alignment? Is this important?
11
Is there any typographic mark for chapter?
1
Different font thickness between InDesign and Word
7
What is the usage of an underline, an overline, or both, around small word such as "the" and "and" called?
0
InDesign line composing for left alignment
6
alignment issues with logo design
1
geometrical alignment based on grid
0
Single word/phrase for "unindent and unalign"?