Can't get Windows 10 font to show in PDF using Inkscape

As in the answer shown here, I'm trying to convert an SVG to PDF using Inkscape on Windows:

My SVG has a font that I just added to my system via the Microsoft Store, but it's not showing up in the PDF, even though when I view the SVG in Chrome (and print to PDF) it works.

It's working with other fonts I've downloaded and installed in the past.

Investigating the SVG, I opened it in Inkscape 0.92.4 where I see that the font family for the text is crossed out, e.g., :

Opening up Font Settings from the Windows 10 Start menu clearly shows this font is installed on Windows. 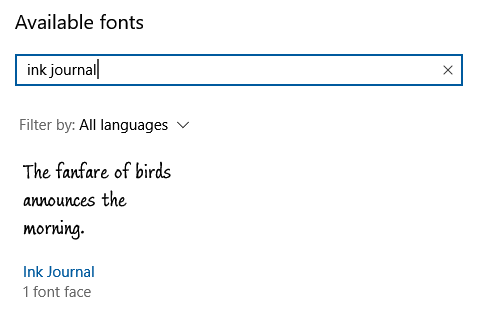 Going back to Inkscape, I see it's not in the list of fonts at all. To be sure, I rebooted my Windows 10, but it's still not there: 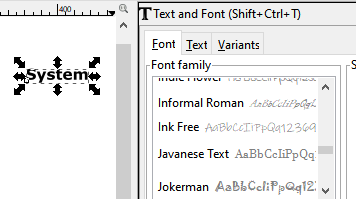 Why won't Inkscape show me all my fonts?

It turns out this is a two-part problem. First, there is a change to Windows 10, where when you install a downloaded font, it's not placed in C:\Windows\Fonts unless you install it for all users. This feature allows users who aren't Administrator to install fonts (which is a good thing for lots of people on Windows 10 machines that are locked down).

Inkscape does not yet take into account this new way of listing fonts, but until they change it, you have to install the font for all users.

If you installed a downloaded font with Install (as opposed to Install for all users), you'll find the font in C:\Users\<username>\AppData\Local\Microsoft\Windows\Fonts. Just right-click and select Install for all users (but you need to become Administrator for this to work): 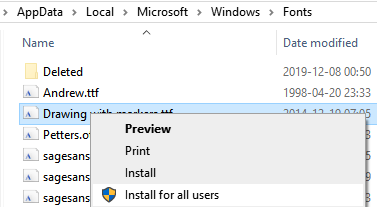 In my case, the Ink Journal font came from the Microsoft Store and it doesn't show in that local folder or even C:\Windows\Fonts as above. A supposed solution was discussed in Reddit and leads to a Microsoft forum, and is quite heavy:

If you do not see the font listed, then, in the Fonts folder, on the left hand side, click on the option “Download fonts for all languages”.

I tried it, and Windows 10 took a long time to download lots of Supplemental Fonts. However, in my case, I still don't see Ink Journal from the Microsoft Store in any of the directories where I can right-click and install it for all users.

To try to narrow down where the font file for "Ink Journal" is, I searched using PowerShell and couldn't find anything like a *.ttf in the C:\Windows tree.

In RegEdit I found lots of entries for InkJournal (no space) when I searched (not for novices). Eventually, I found an entry that was C:\Program Files\WindowsApps\Microsoft.136853439117B_1.0.1.0_neutral__8wekyb3d8bbwe\Inkjournal.ttf (surely a unique key on my machine).

If you search for your font (or any *.ttf) using Windows search inside C:\Program Files\WindowsApps\ you can probably find the Store-installed .ttf easily. Since it's installed as an App by the Store, it makes sense finally it would not be under C:\Windows.

Using that info, you can Install for all users as above.

The crux of the problem seems to be that Inkscape depends on fontconfig, which apparently doesn't read the Windows registry to get font info (an issue raised in 2015). A fix to Inkscape to include user-installed downloaded fonts in ~/AppData/Local/Microsoft/Windows/Fonts is on the way.

But I'm pretty sure it will NOT solve the Microsoft Store font problem, since those fonts don't wind up in that directory (nor any obvious directory). The request for fontconfig to support the font registry in Windows is over 4 years old, which doesn't look good for Inkscape supporting fonts from the Microsoft Store any time soon. At this point, it seems it's not possible to use them in Inkscape.

Not the answer you're looking for? Browse other questions tagged fonts inkscape pdf svg windows-10 or ask your own question.

58
How to export an Inkscape SVG file to a PDF and maintain the integrity of the image?

2
PDF font embedding; any utility to batch test font collection?
1
How to use Windows Type-1 fonts in Inkscape on a Mac?
10
Why won't a font allow embedding in a .pdf? Will it print right anyway?
3
Font style doesn't change in Inkscape
7
How to determine correct font name between OSX and Windows with Adobe "Find Font"
4
Alternative Font Family for text in SVG-file