How to achieve this "wrapped Effect" in photoshop?

I try to get this effect. 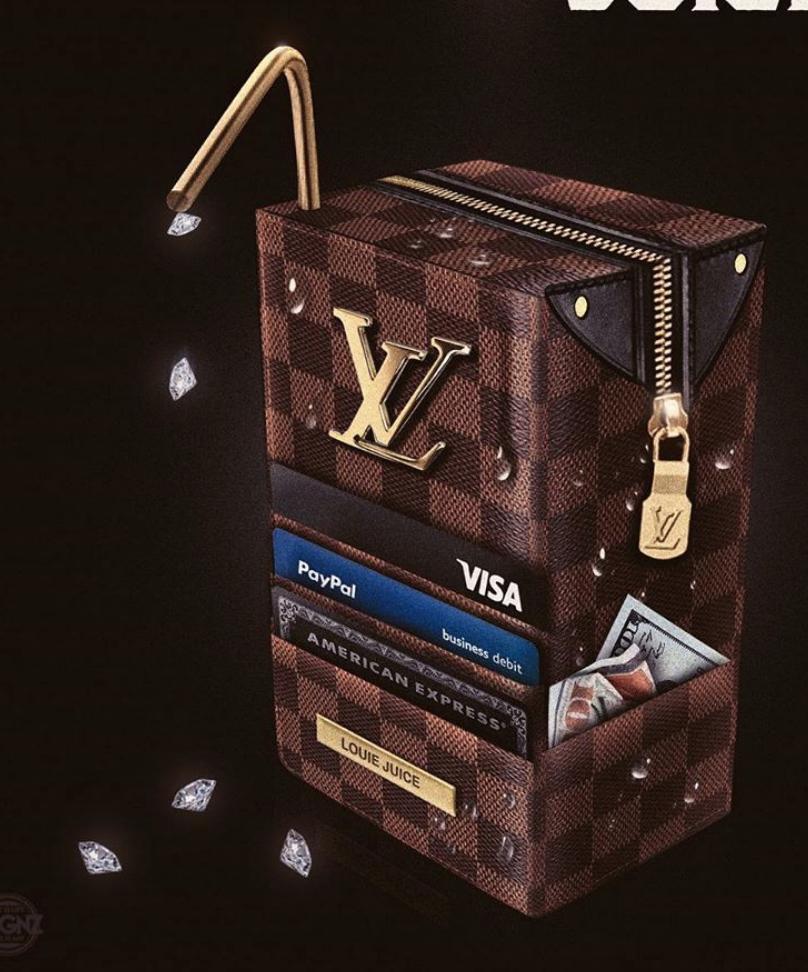 I assume it was just a louis vuitton texture, with a mulitply blending mask but when it try, i get this effect. 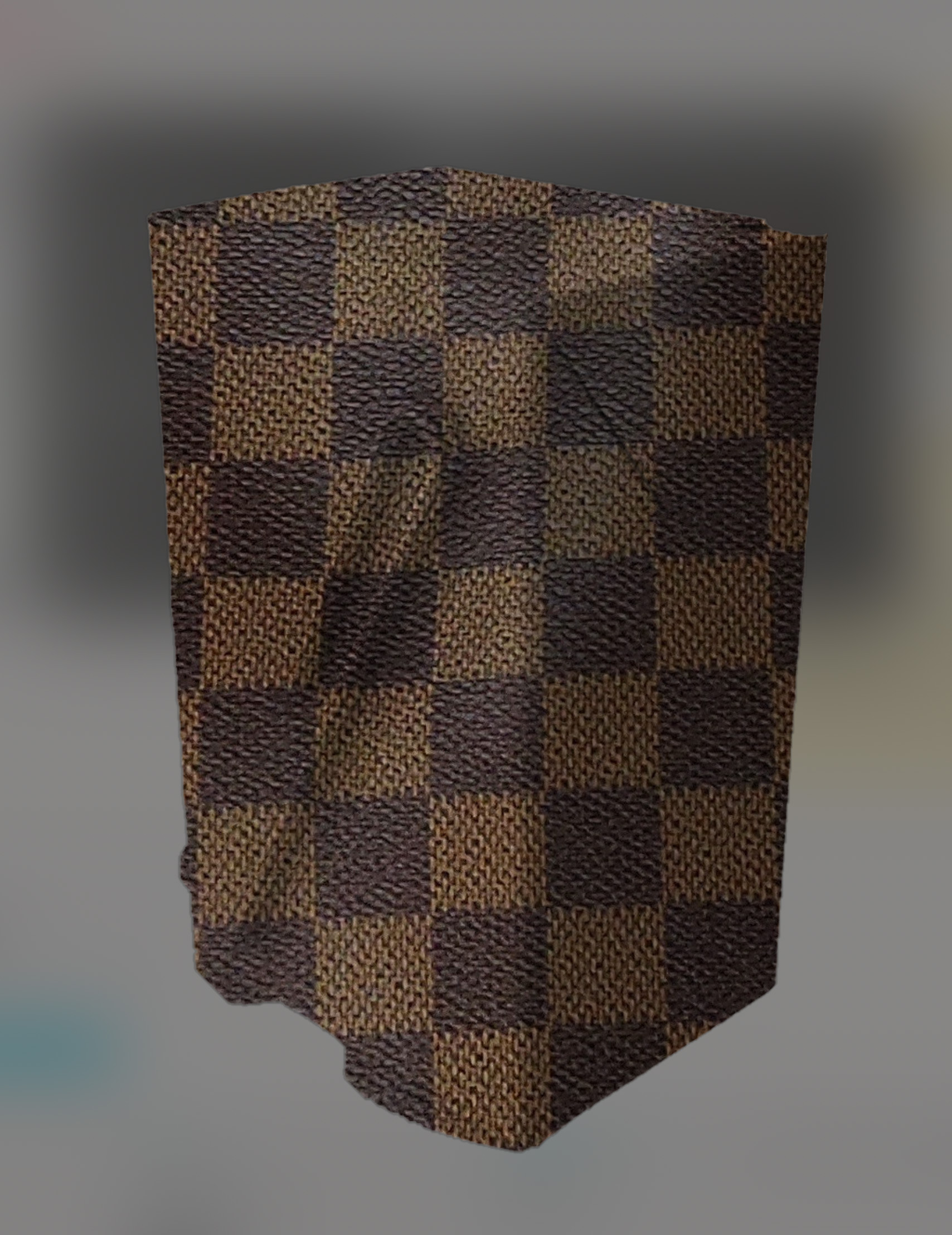 The given example with credit cards, a straw, metallic items, water drops and crystals is quite a complex composition. I guess you want a box and a straw both covered with a texture pattern, but the pattern should be seen as placed on the surfaces of the items. Your current attempt has the texture as it was cut from a piece of flat cardboard. Making parts of it darker doesn't remove the apparent flatness.

In theory you could stretch several copies of the pattern to the right shapes with distortion and combine them. It's quite possible if the geometry is simple - a rectangular box. You can find easily numerous tutorials where rectangular images are placed on the sides of a rectangular box. But you seem to be aiming for more general approach.

Also curved surfaces can be covered with planar images, but Photoshop's warping tools are very inflexible. Here's an example of using Affinity Photo which has a somewhat more realistic mesh warp. how do I warp a rectangle to part of umbrella/sphere?

There's also something about how to use Illustrator. In 2D it's Envelope distort handles texture photos well, too. Illustrator's 3D with Map Art can often place images onto simple surfaces quickly, but often the result is a mess due the limitations of Illustrator's 3D.

The straw cannot be made with Illustrator's 3D effects, but it can be drawn as a 2D shape. This older case presents several versions of it:Drinking Straw stripe pattern Illustrator

Photoshop has some 3D functions, but you are limited to a set of preset shapes. In Photoshop you cannot properly create your own 3D models. Placing and even creating textures is supported but the available control isn't like in real 3D modelling programs.

For the best control you must get 3D. Here's an elementary example: 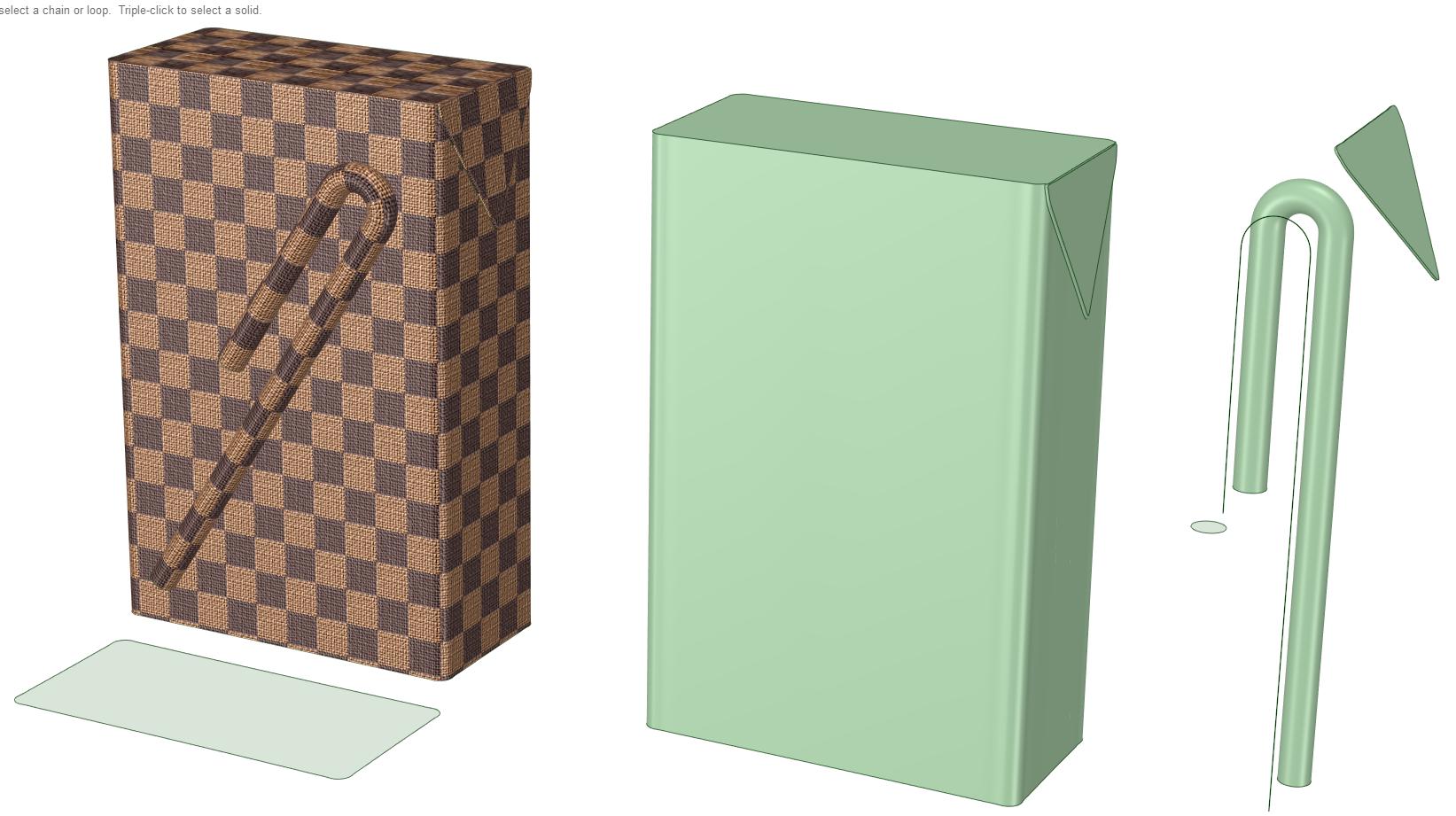 There are some drawn 2D shapes, an extruded box and a bent straw which is actually a circle extruded along a drawn U shaped curve. Drawing this all and placing some images on the surfaces is a quick job, less than ten minutes.

It's possible to see some fuzziness on the textured box. It's caused by unfortunate interference between the screen pixels and the texture details. It vanishes if the zoom is changed: 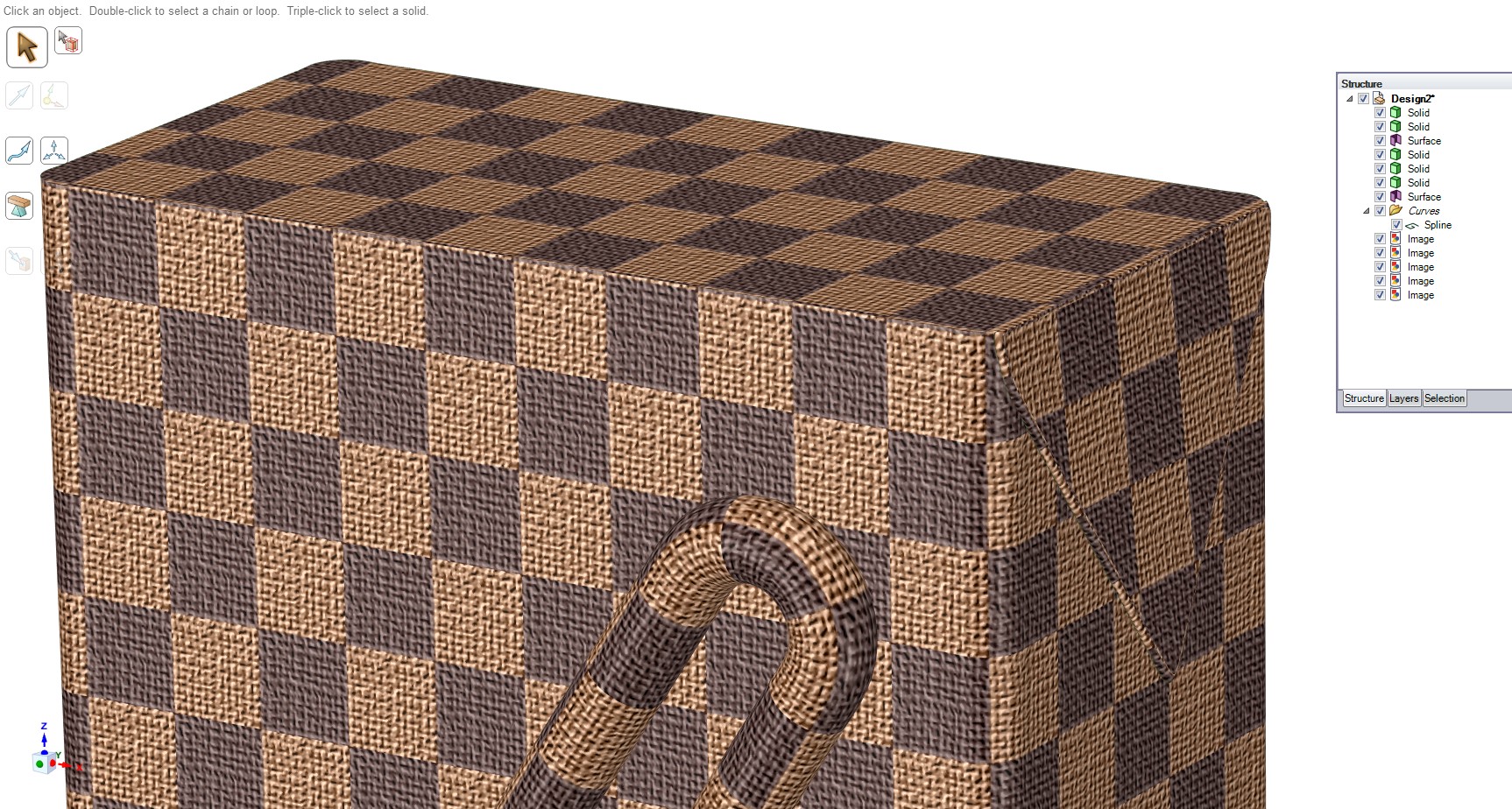 This is not a realistic bent cardboard sheet + a pipe, it's only a few extruded solid blocks which are placed side by side and covered with pasted texture images.

The brown texture also is fake, it's an image drawn in Photoshop. It has no thickness like professionally modelled 3D textures. Originally it was this piece of Photoshop's default burlap texture, colored, defined as new pattern. 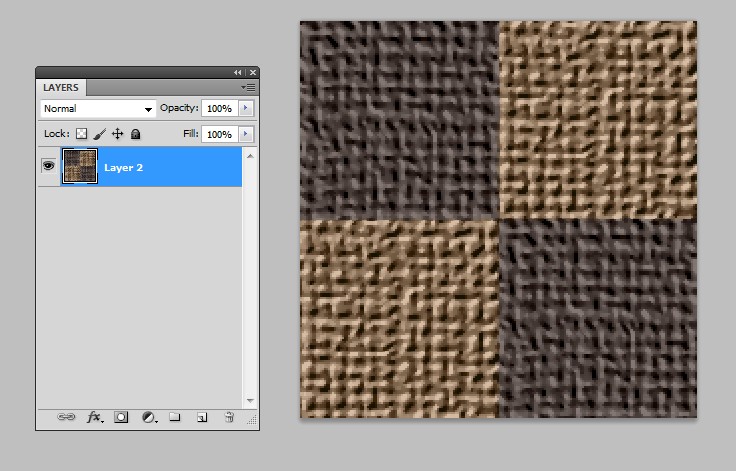 A 4000 px high image was filled with this and copied to the clipboard. From there it was pasted to the surfaces.

Used 3D program = DesignSpark Mechanical, free version. It's intended to be a 3D CAD program for beginners, but also so good and easy that beginners do not lose their interest. It doesn't have photorealistic materials nor rendering with realistic lights and shadows. Better shading is possible to be inserted in Photoshop. There one can add to the rendering result a couple of painted layers for glossy highlights and shadows.

I guess much finer results are available with artistic 3D modelling programs such as Blender(free), Maya, 3DSMAX etc... But starting with them needs weeks of time and some real ambition to defeat the unavoidable complexity.

ADD The questioner has recently added that he wants "how to work it in Photoshop". Of course it can be painted as 2D image, but the needed amount of work is high if something like this is wanted: 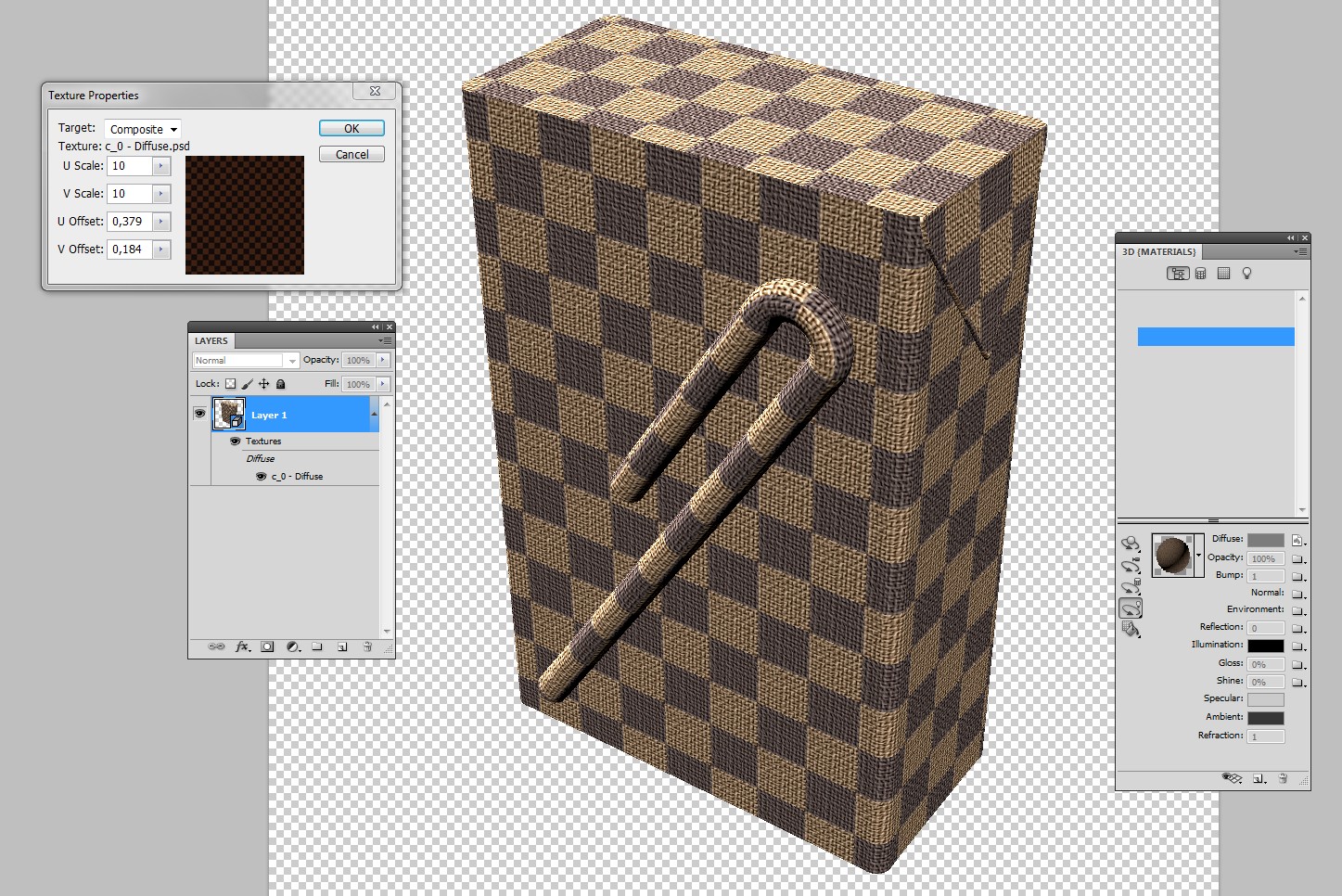 Inserting manually apparent curvature to some surfaces and the shading is a demanding task. 3D program can give them nearly for free when compare to working in 2D.

But this is not painted. It's my 3D model exported as OBJ file and opened in Photoshop.The texture is added as "new texture". The texture image is this: 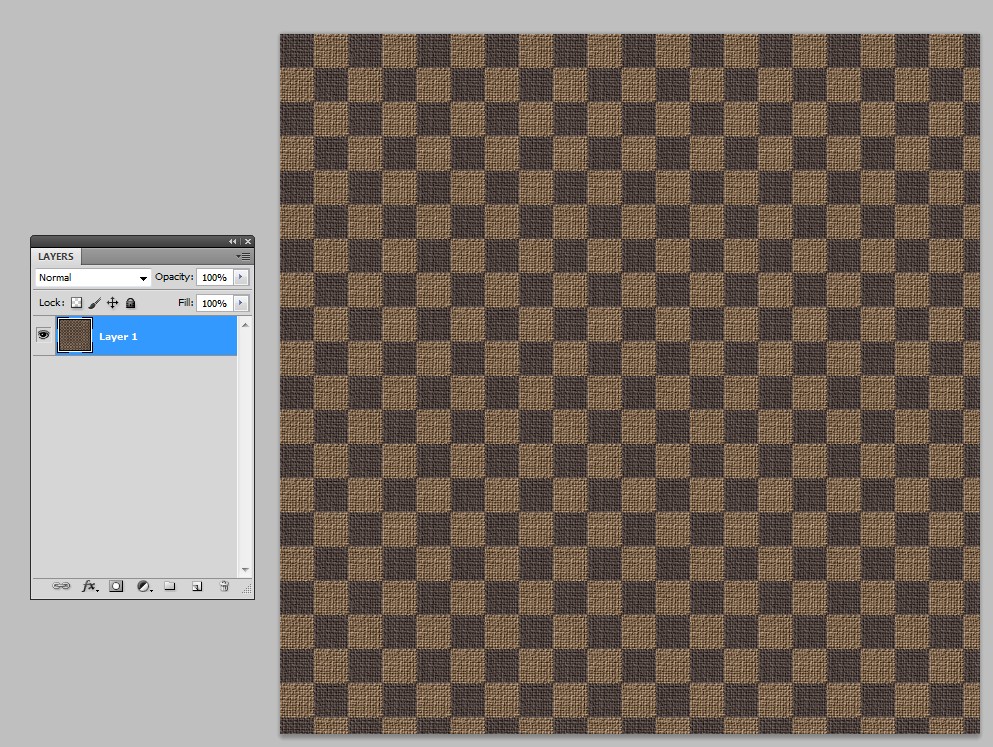 Without texture Photoshop shows this: 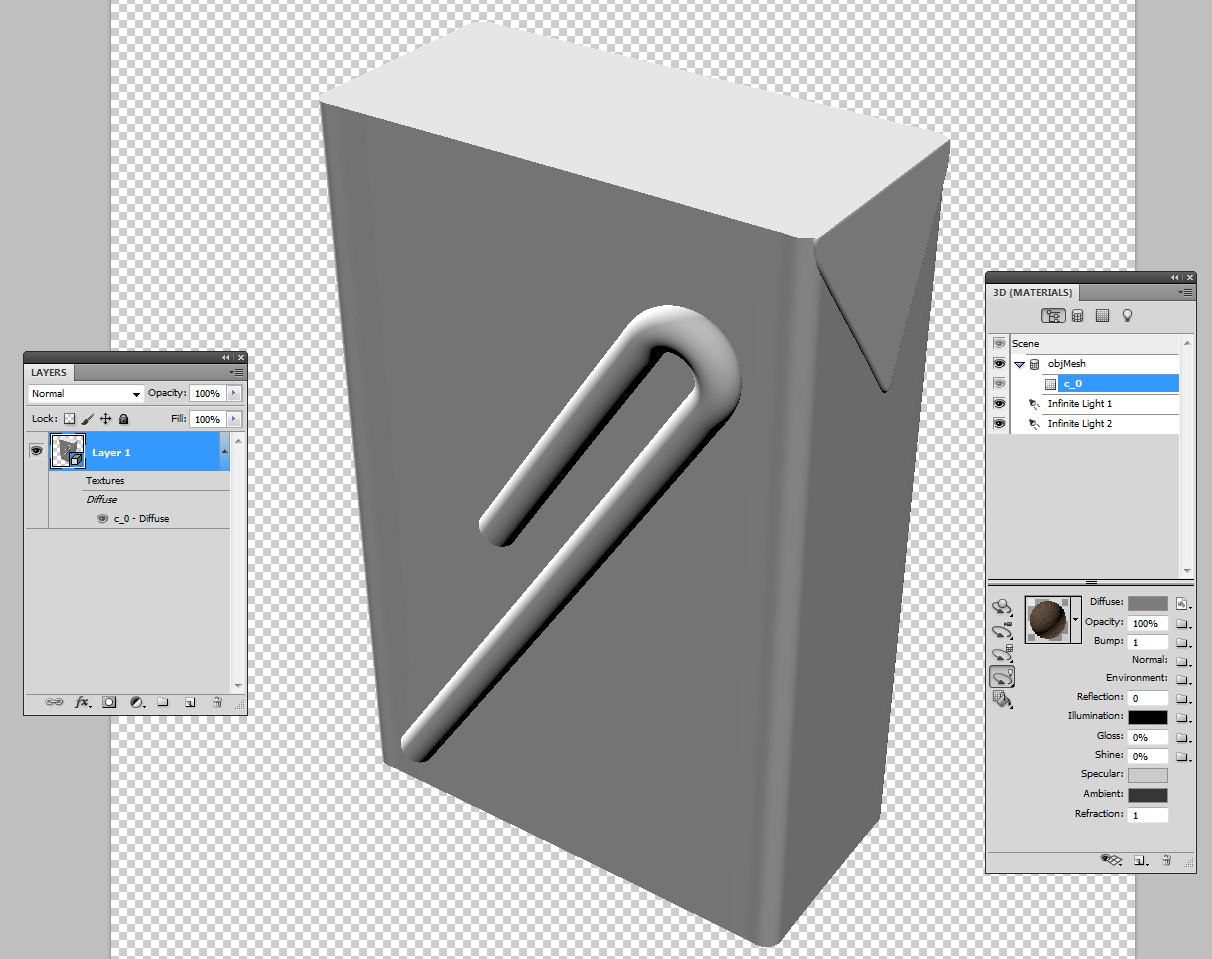 You can see that I have placed two differently directed lights for better separation between the box and the straw. Photoshop succeeds quite well in this.

Generally difficulties appear because building multishape assemblies isn't supported and you have very little control how PS maps the texture image onto the model. The model here is a single 3D mesh (box and straw are united before exporting). This time I succeeded to select texture image dimensions, UV-scaling and UV offset so that the worst non-fitting seams are in the dark side of the shape. The top side isn't well aligned with vertical sides, but there's no easy way to adjust texture placements on surfaces separately. In 3D CAD program it was easy.

It's a lot of manual work on Photoshop without a 3D software package (the reference image doesn't look like it was made on a 3D software). Short of a full tutorial:

3
Drinking Straw stripe pattern Illustrator
0
how do I warp a rectangle to part of umbrella/sphere?