Lets say I have a cube in an isometric pixel art with the 'normal' color #ff0000 (red) and I want to shade remaining sides, is there a rule for selecting the top (brighter red) color and the darker color?

I guess I want to know if there is a formula for calculating the color values, and also what side is most used to be darker, left or right?

There is no rule for shading isometric pixel art. It's an aesthetic design decision which depends on the vibe you want your artwork to have.

Even though pixel art is often highly stylized and mostly doesn't involve realistic lighting, adding shading is an emulation of a light source. It can be helpful to be aware of some of the basic principles of light and shadow.

The shades of the front faces reveal the direction of light.

I wouldn't say that there is a real convention for the direction of light. In user interfaces (and graphic design with "artificial depth" in general) the light mostly comes from the top left (like the light from an ordinary desk lamp), so my initial guess would be that the same goes for isometric pixel art, but a google image search for isometric pixel art reveals that different light directions are common.

The contrast between the shades on the faces can tell something about the diffusion and reflection of light and the amount of ambient light. It's probably most common to use the same contrast for all colors, but it's also possible to use different contrasts for different materials.

The color of light can altered be by tinting the shades, highlights and the black and white contours.

There are many different approaches to achieving consistent shading depending on your personal taste, which application you use and your workflow. Here are some general examples.

Mix with black and white

Mix only with black

Pixel art emerged in the 1980s and back then the computers had very limited fixed palettes of for example 4, 16 and later 256 colors. The artists couldn't choose carefully calculated shades, but had to make do with what they had at hand. This limitation actually served as a catalyst for creativity as artists were forced to choose more sophisticated color combinations.

Have a look at the default EGA 16-color palette used on PC from the mid 1980s.

If we were to only use these colors we would be forced to introduce inconsistent contrast and to allow hue shifts. This can, in my eyes, add to the artistic value of the coloring.

A way to achieve a wider array of perceived colors with a limited palette is to use dithering.

Here I've just used Photoshop's Indexed Color with Pattern dithering, but a true pixel artist would of course do the dithering "by hand" to have maximum control.

Lots of pixel art doesn't 'calculate' any shading or other lighting colours, for they use a fixed palette. Just find the most appropriate colour (or the least unappropriate, in some cases) in the palette you're using and go with that.

This palette limitation is to emphasise pixel art's simplicity and it harkens back to the old computer systems the medium was born on: those couldn't display more than a set amount of colours. As 'restrictions breed creativity' (— Mark Rosewater), lots of pixel artists like to limit themselves colourwise as well as resolution-wise.

Good examples of palettes are Fleja's Master Palette and the PICO-8 palette.

Because exact lighter or darker versions of colours are (most often) absent in these palettes, pixel artist usually apply hue shift in their lighting. That is, if a lighter or darker colour variant is needed, the colour is slightly changed around the colour wheel. For a lighter red, a pixel artist might use, in sequence, a dark orange, a light orange, and a yellow. This 'ramp' as it is called, pushes the lighter colours to the warmer side of the colour wheel. Darker red ramps can be made with purples, blues or even deep greens, pushing towards the cooler side of the spectrum.

Pixel art custom palettes are commonly built around these ramps. The Fleja Master Palette I mentioned earlier is a good example of this.

Here's an example of one of @Wolff's cubes with (rather extreme) hue shift for lighting, and some shading: 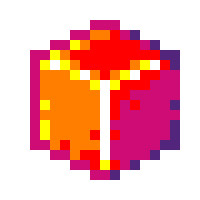 Well, there is a formula (or many formulations) but that depends on what material you have and what direction your light is shining from, the formula uses stuff like Sin and Cross product.

However, nobody uses this, because they can just choose colors by themselves. After all if you are manually drawing the isometrics its mostly about taste.

OTOH, if you are making a computer program to do this. Then i suggest you look up a tutorial to 3D graphics programing

Not the answer you're looking for? Browse other questions tagged color color-theory pixel-art isometric or ask your own question.

11
In GIMP, how do I use an image as a color reference to colorize a black-and-white photo?
2
Compare temperature of two colors
13
How do I convert a red color scheme to a green one without making it look “brighter”
2
Photoshop CC 2014 - Selecting a pixel art isometric line
7
Pixel art Randomness
3
User Input Color Restrictions
1
Is there a way to get correct color mixing without posterization, working with 8 bits only? Or something better than Linear RGB color space mixing?
2
Exporting isometric cube to png results in incorrect sides and rough edges of the cube