I am making an illustration of a hot air balloon in Adobe Illustrator CS6 through following this online tutorial. I am at the following stage in the tutorial: 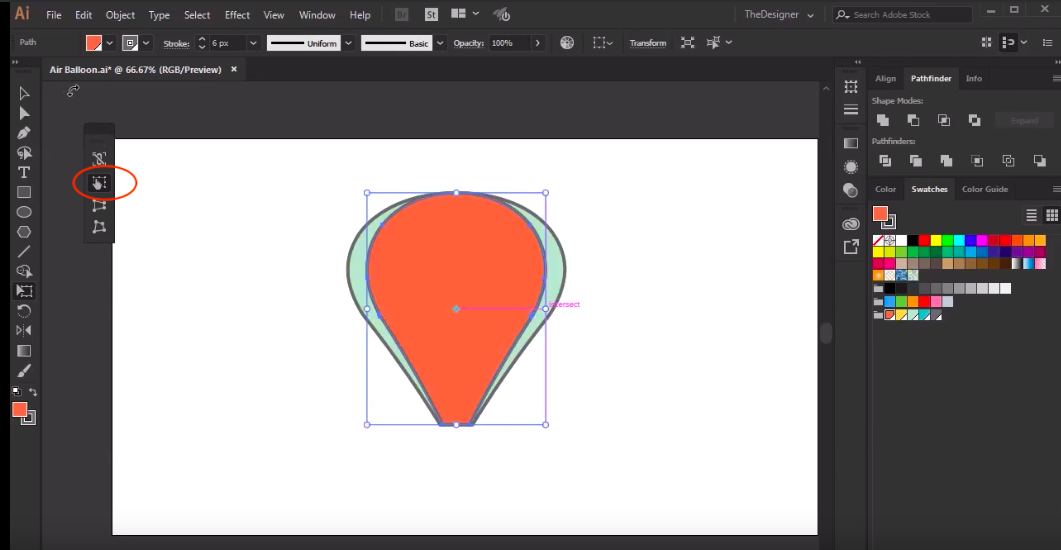 This stage of the tutorial uses the Free Transform Tool. However there is a second menu, and there is another tool selected (see red circle in above image). I currently have the following:

I am not sure what the tool circled in red is and how to get it. Any insights are appreciated.

(Did not watch video)

As with any tutorial, you will generally find that if you use a version of the application which is older then the tutorial author's version, you will run into roadblocks due to missing features in older application versions. Many times, there's no way around that.

However, that's not the case here.... You can perform the same action merely using a different way to access the same feature.

The screenshot from the tutorial shows a newer version of Illustrator. The secondary popup toolbox was added to Illustrator CC. You will not find it in Illustrator CS6. It does not exist in CS6.

To use the Free Transform Tool and apply the exact same distortions as the secondary toolbox, you need to use Modifier keys in CS6.

With the Free Transform Tool....

In your screen shot, it appears as though you want to use the Option/Alt with the Free Transform tool to move both sides of the shape at the same time (from the center).

Be aware, the order in which you use these modifiers is important.
You must follow this order precisely....

If you fail to follow this order, the distortions won't work. It can be tricky to learn the timing of the actions, but it will absolutely work in CS6.

This difficulty in timing the order correctly is precisely why Adobe added the secondary toolbar. The new popup toolbar simply does all the same things as above, but without the need of modifier keys or the precision in the order.

Note that all these modifiers still work in Illustrator, all versions. So, you can use them in Illustrator CC as well and ignore the popup toolbar if you prefer. I traditionally find pressing a few modifiers faster and easier than switching tools.

Not the answer you're looking for? Browse other questions tagged adobe-illustrator cs6 or ask your own question.