How can I connect a path to an object in Inkscape?

I created a sankey diagram (using the awesome sankeymatic.com), which I then saved as an .svg and opened in Inkscape.

The resulting diagram has nodes represented as objects and flow represented as paths. The path stroke width represents the flow quantity (in this case dollars), and each object is the same width as the total of the connected flows widths. 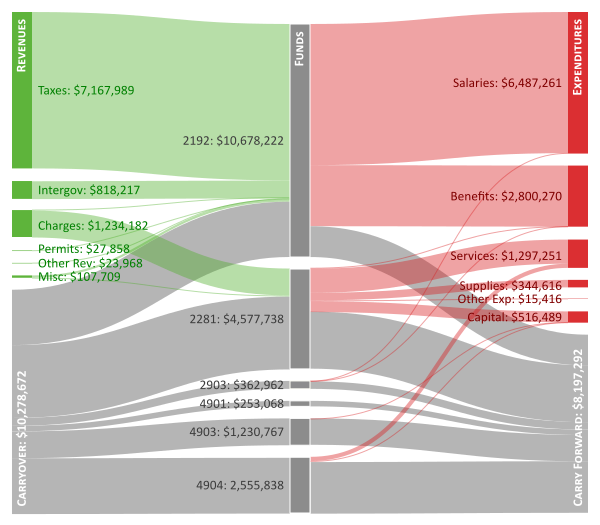 What I'd like to do is connect the paths to their corresponding objects so that I can move the object and have the associated path endpoints move together. Is that possible? And, if so, how can I do it?

I've tried adding nodes to the object, but can't get them to properly lineup with the path endpoints, or to connect them to move together.

There's no way to connect a path to a filled object like that. You can't connect an open path to a closed path in vector image editing software. It's not possible.

It is possible to have nodes overlap using snapping to get them exact, and you could move the object and an open path together by selecting the nodes with the Edit by Nodes tool, so that they move together. This is not a physical connection that can be made permanent.

One solution that I've discovered is to

7
Create and Edit Parallel Paths in Inkscape
4
Inkscape: how to reuse part of a circular path (inner boundary) and connect it to another path inside of that
2
How can I outline a path in Inkscape to make an object?
5
How to snap a path to a node in Inkscape?
3
How to split an icon into 3 different objects?
3
How to convert inkscape arrow to single path?
4
How to join multiple path objects into a combined path object in inkscape?
1
Inkscape - breaking object apart
0
Substitute object file path in Inkscape