How can I measure the “colorfulness” of an image?

Alright Ive looked at https://www.quora.com/Is-there-a-way-to-measure-color-saturation-in-Photoshop and read Color Theory: Is there a measurement of "colorfulness"? but need an applicable solution. In Photoshop (or another creative application) I dont know how to get the colorfulness of an image as a value.

I pulled up histograms of a light BW image (colorfulness should be low/zero):

And a dark BW image:

And a colorful image: 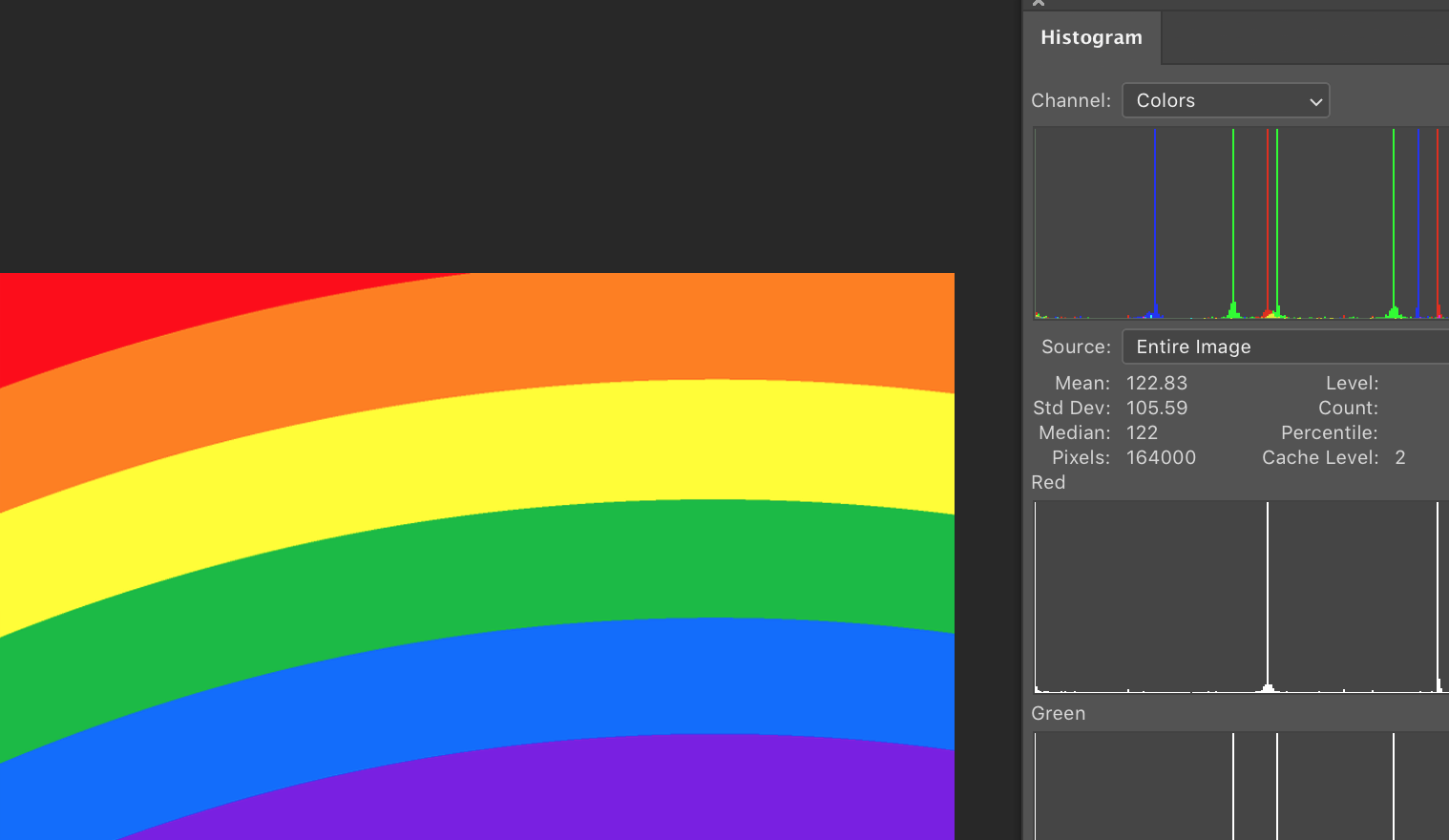 this is measuring the color channel as an average of the whole image, however the mean value doesn't help me here. The light BW image and the colorful image both score high due to luminosity I think, but the dark BW image is a low value.

How can I effectively measure/rank colorfulness of images?

We have got two samples how the wanted colorfulness ranking method should work: Colorless BW photo should give a low number and a rainbow which has some colors which at least on a normal sRGB screen look quite bright and saturated should give a big number.

You have already got a hint to redirect your activity to a scientific website and to use CIELAB color system which is designed to be a math model of how colors are seen. RGB and its alternative formulations HSL and HSV (=HSB in Photoshop) present how colors are produced in computer screens.

The suggestion is not bad because most of us have quite thin understanding of the mathematical theory of color perception. We are more effective in making and mangling images and layouts.

Both reduced saturation and reduced brightness reduces the colorfulness in this ranking system. BW image has zero colorfulness.

These are achieved by multiplying the saturation with the brightness in every pixel and by calculating the average over the whole image. 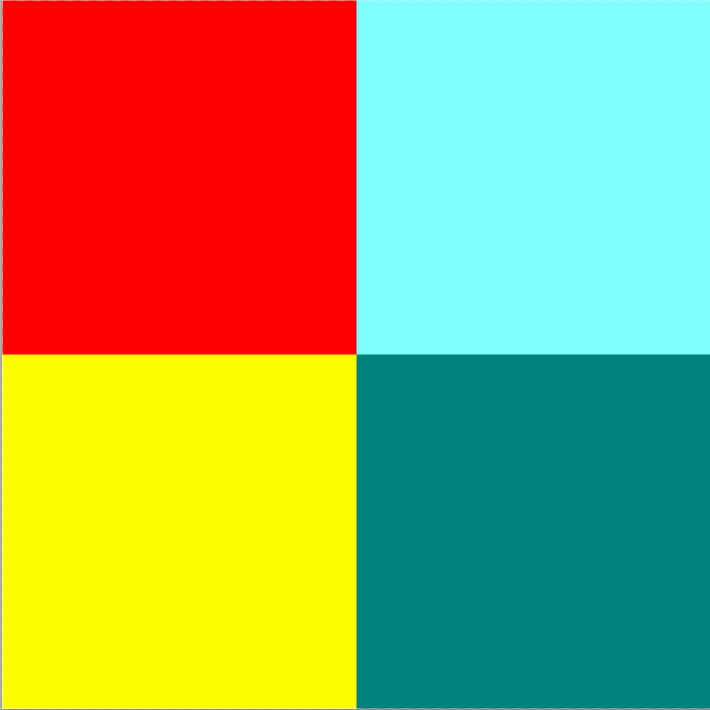 Photoshop has HSB/HSL filter which extracts hue, saturation and brightness or luminance and places them to R,G and B channels of the image. NOTE: In legacy versions of Photoshop the filter is an optional download.

We extract with that filter H, S and B of our test image: 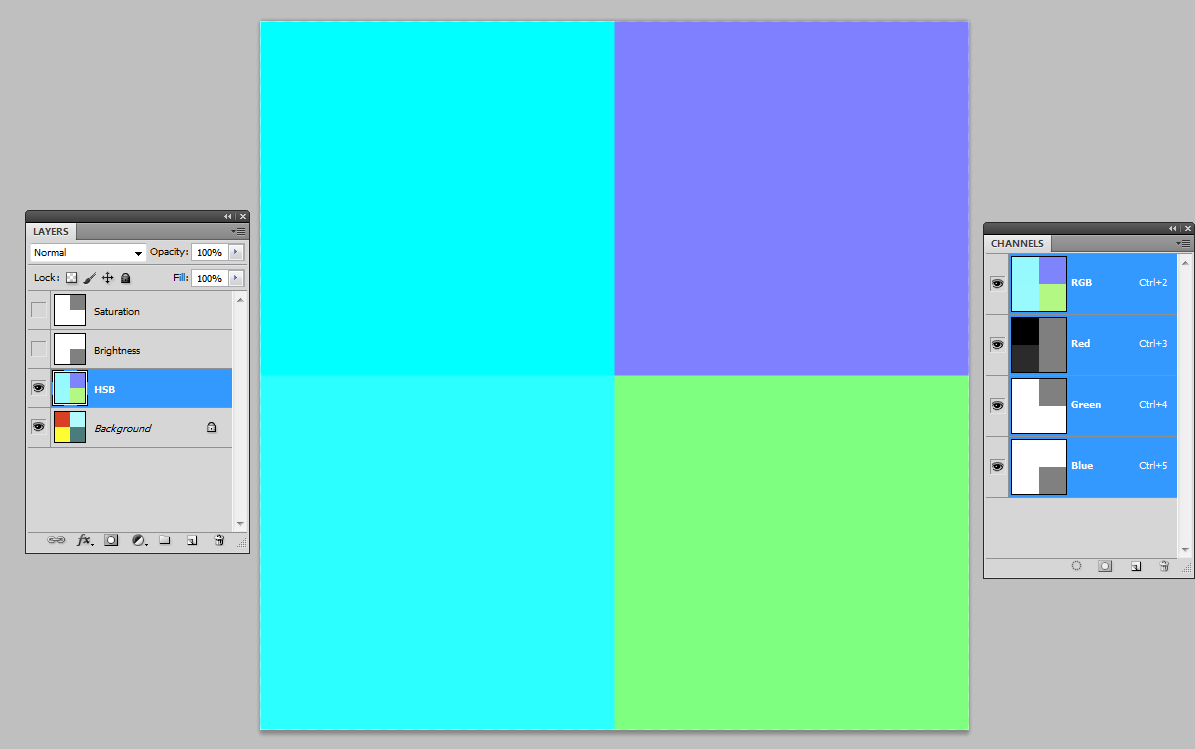 The color looks weird, but that's meaningless because R channel has hue, G has saturation and B has brightness. Saturation and brightness are copied to the clipboard one channel at a time and pasted as new layers on the top. See the disabled pasted layers in the layers panel.

WARNING: Turn the color management off (=none) in the Edit > Color settings dialog. Otherwise everything fails because the channels are handled as grayscale images and pasting them to a RGB image changes the brightness substantially if grayscale images are color-managed like they should be for printing.

The next step is to multiply the saturation and the brightness pixel by pixel: 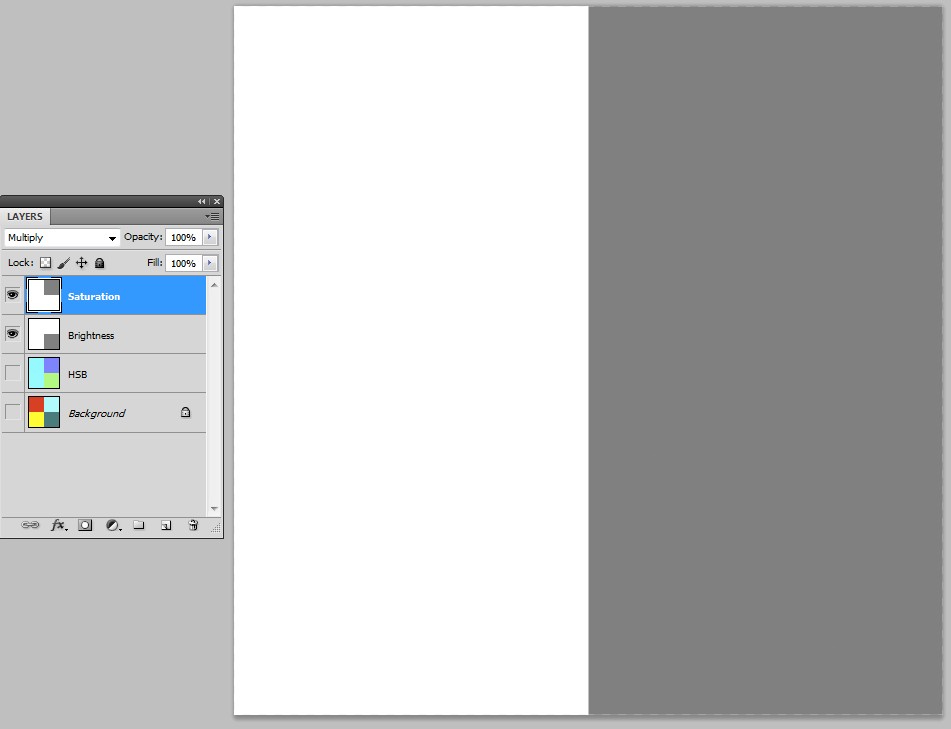 The top layer has blending mode multiply. This image already shows the pixelwise colorfulness. The left half has 100% and the right half has 50% colorfulness.

Merging the layers and applying Filter > Blur > Average calculates the overall colorfulness. Picking the color with the eyedropper gives R=G=B=192 or as well the brightness=75% as expected: 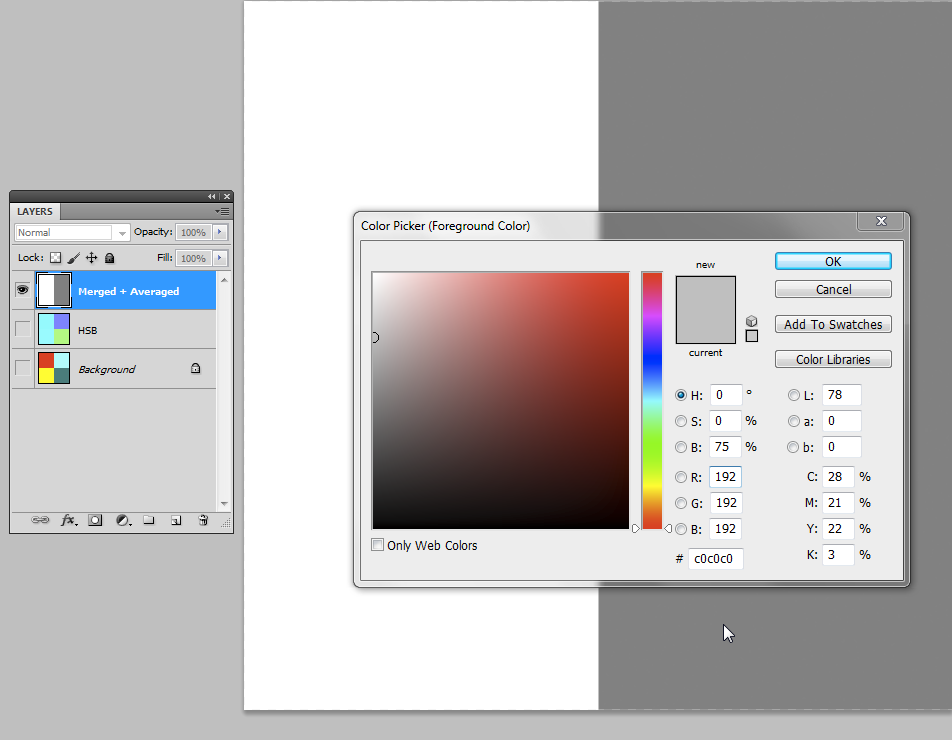 I'm not a programmer but I guess programming this method to a script is an easy piece for programmers.

As said, this ranking method is not perception based. But in Lab color mode one in theory could present a subjectively more truthful colorfulness ranking method. A simple mode change doesn't work because Photoshop hasn't HCL (=the polar version of Lab color system "hue, chroma, luminance")nor channel decomposition filter for it. The job needs a programmer or a workaround must be found. I'll return and insert it if I find one.

I have no idea how to measure "colorfulness", but we can measure saturation. In fact, you used that word to describe what you need

Here is the saturation channel of the first image, where you can only see the slight green tint of the histogram on the top-right:

And here is the saturation on the second image: 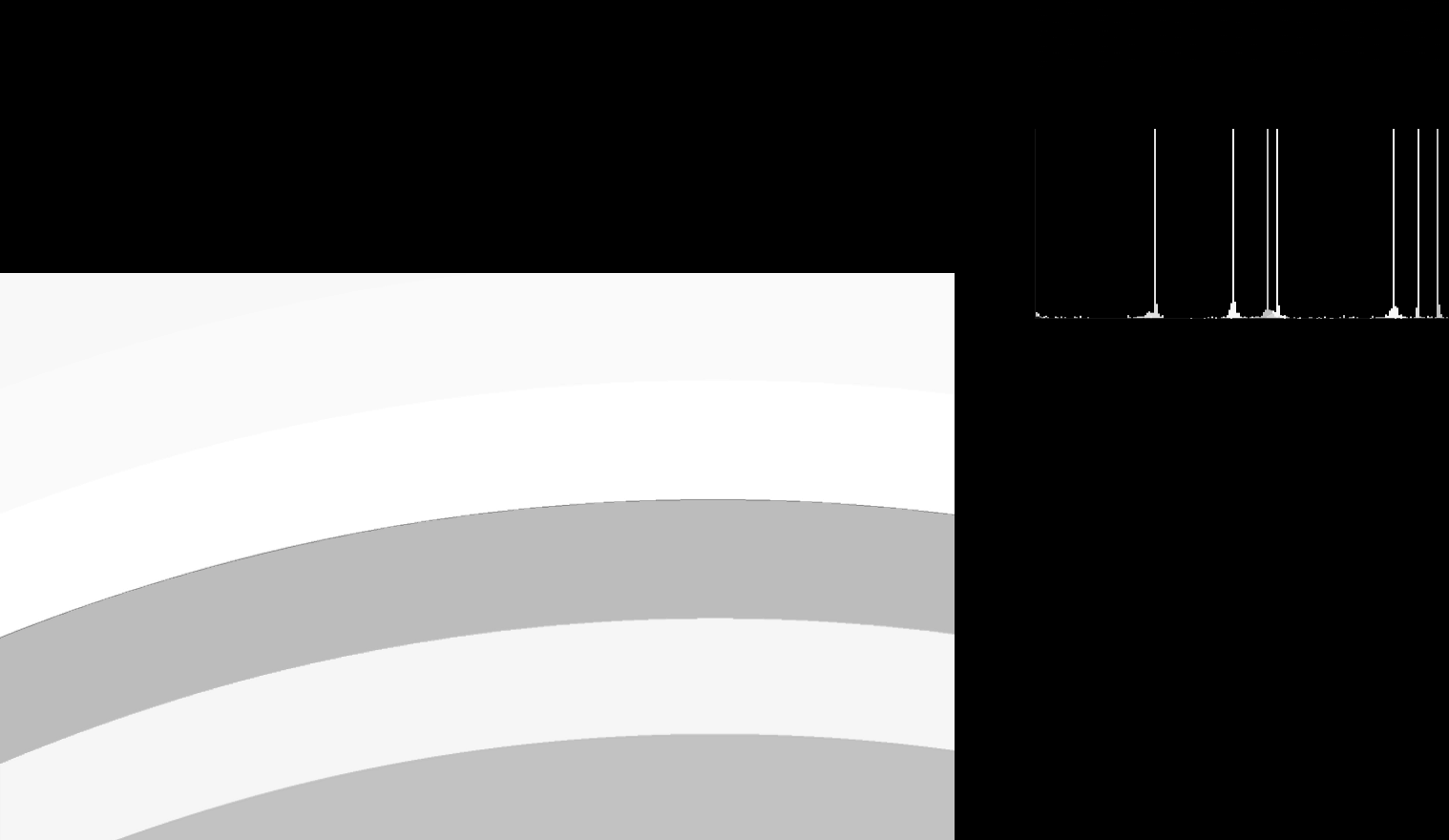 Now, that is something that you can measure with the method you already applied.

I used Corel PhotoPaint to split the HSB channels. You can use GIMP that has Decompose or extract Channels

Not the answer you're looking for? Browse other questions tagged adobe-photoshop color color-theory saturation or ask your own question.

10
Color Theory: Is there a measurement of “colorfulness”?

1
How to create an art asset that can be dynamically colored in software?
10
Color Theory: Is there a measurement of “colorfulness”?
1
matching color tones and lights of 2 images with photoshop
1
Critique: What UI colors to use in an image-based design?
6
How to apply the difference between 2 colors to another color?
1
How to determine the difference of color vibrance of a pair of images?
2
Why does an almost solid line appear in this image?
1
How to get a color scale representing reflected light
0
How do I make a set of images exactly the same hue/darkness as a sample image?
0
How to convert blurry edges to be one of the colors it is blurred between?