How to isolate a cat's whiskers from background in Photoshop 2020?

This is our cat: 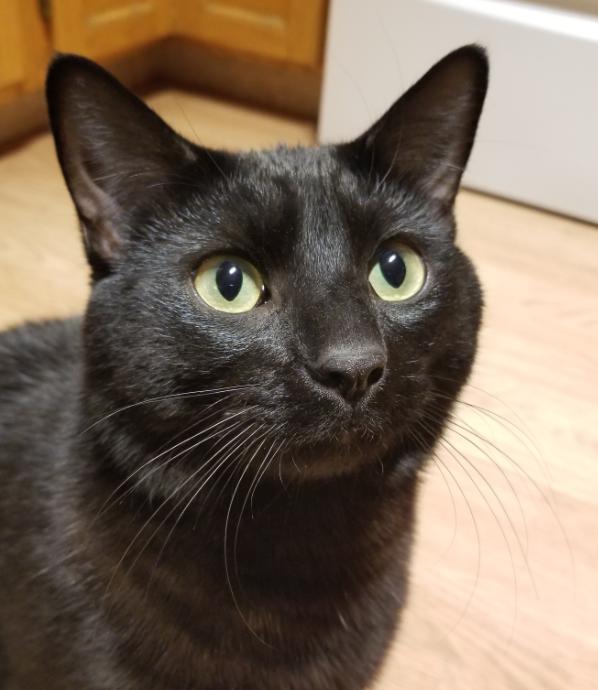 I am attempting to isolate her whiskers from the background: 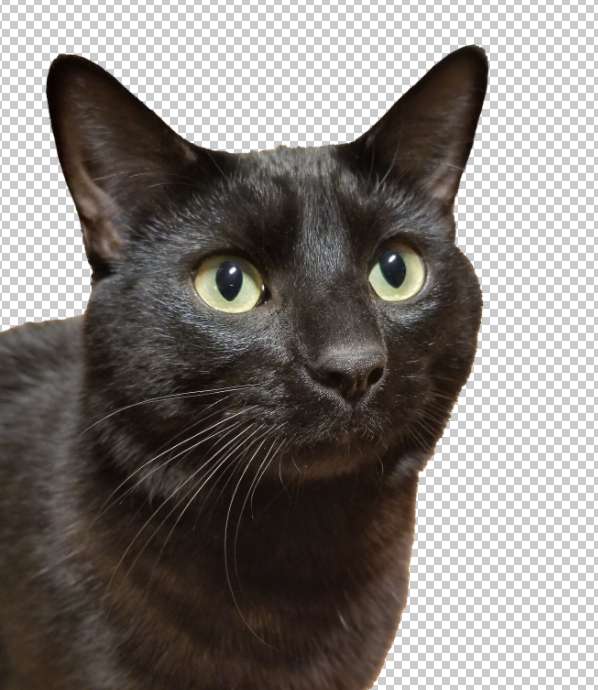 The Object Selection Tool does an excellent job of identifying the cat and selecting it but it struggles with the whiskers.

What would be the most effective method to include the whiskers in the mask selection?

Any advice on the best way to approach this would be much appreciated!

I was able to create the following image using Billy Kerr's brilliant advice: 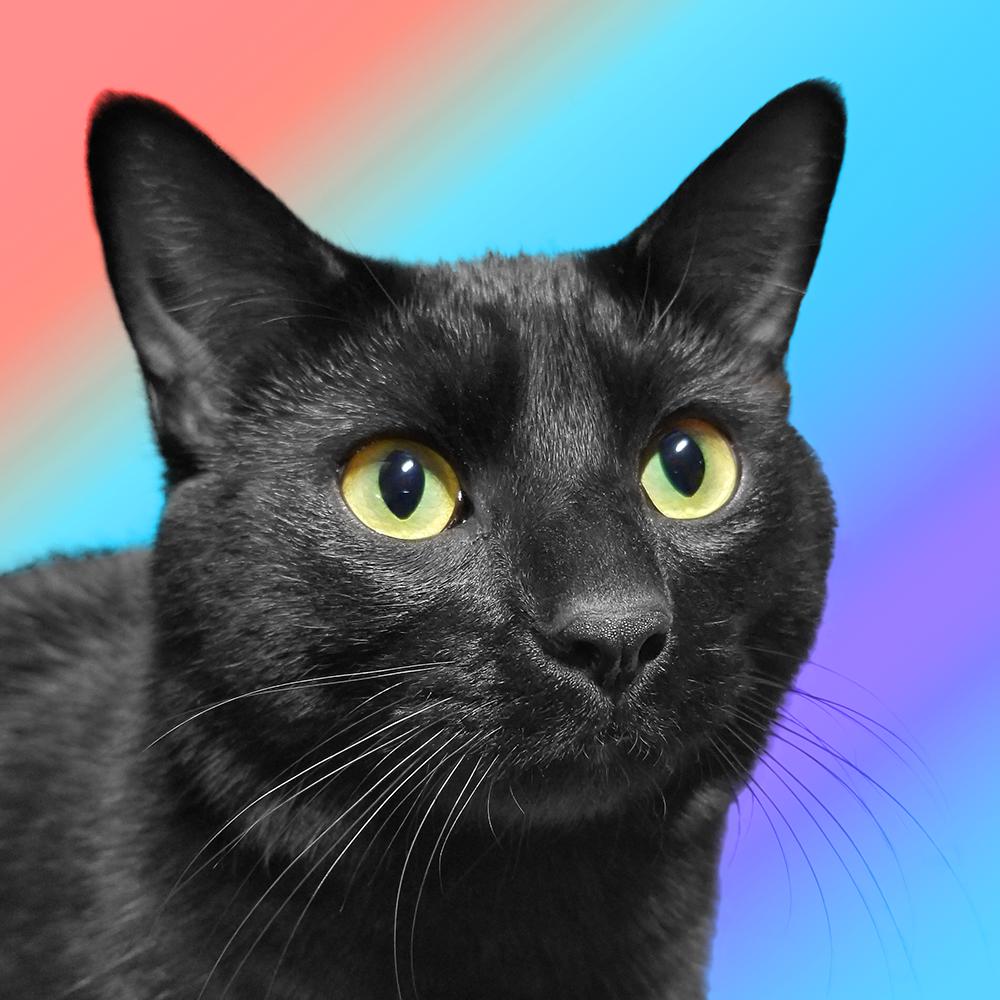 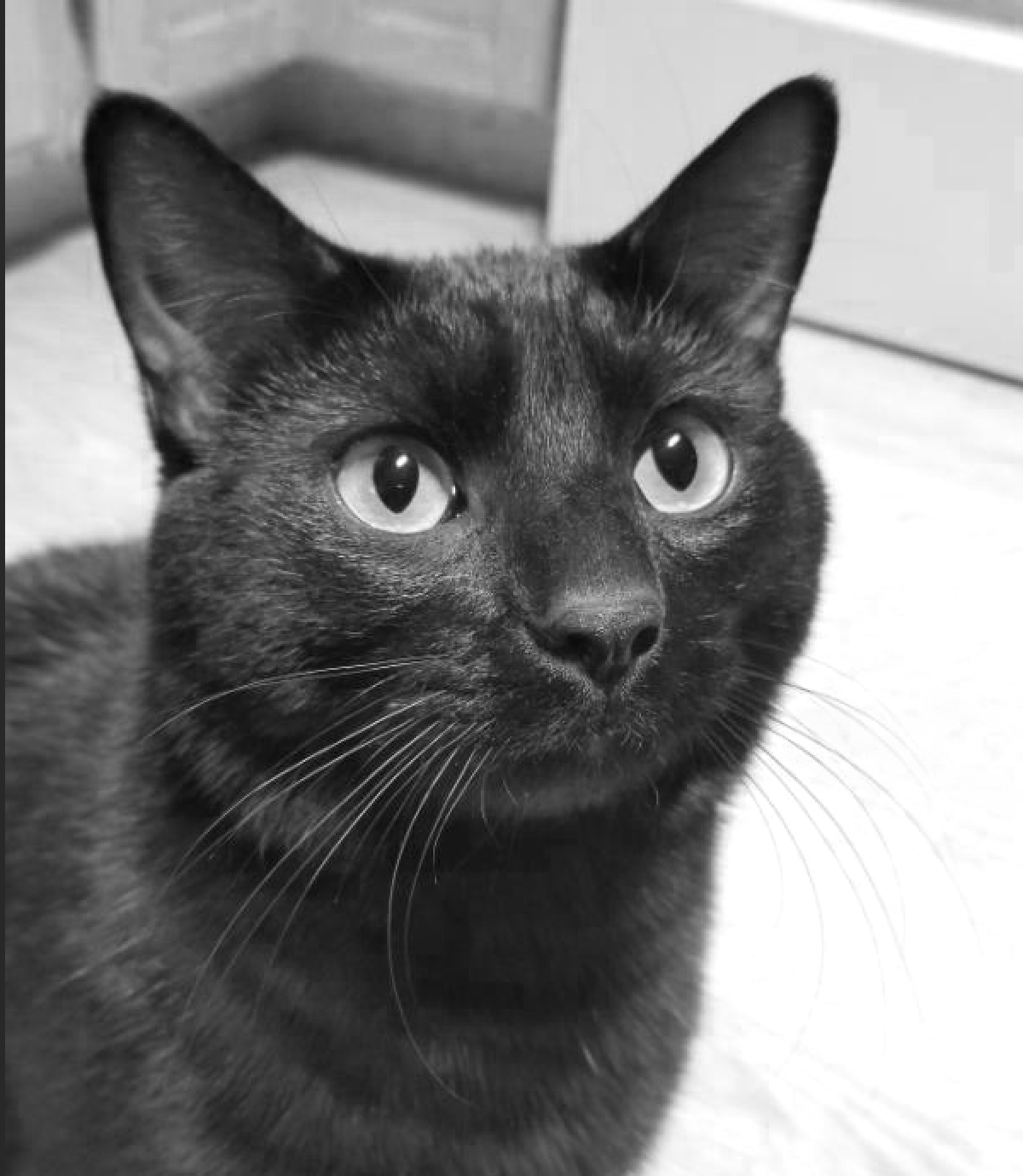 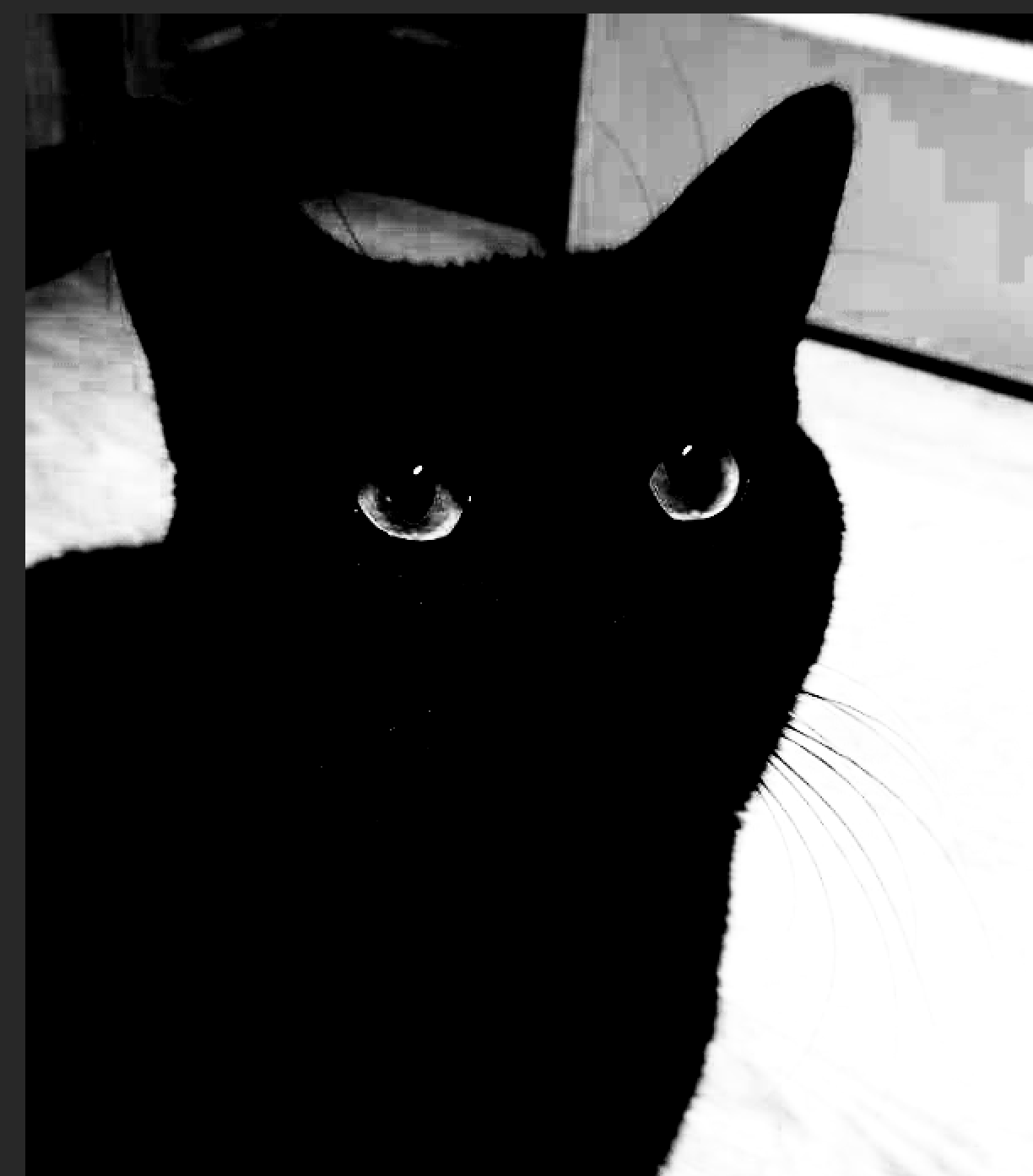 cleanup and use as mask 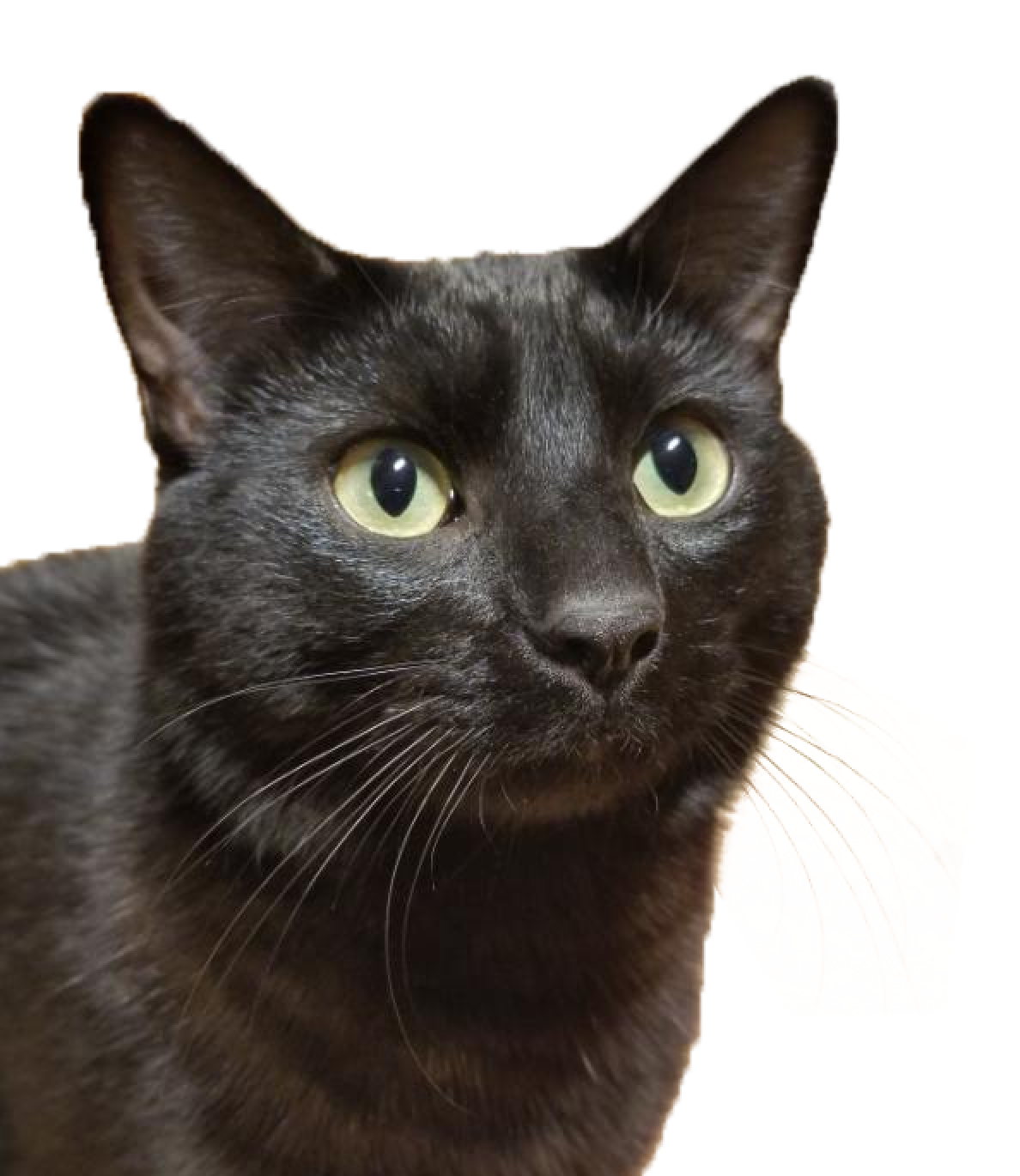 The trick is to photograph against a very light background then this is easiest to mask.

Single hairs and whiskers are often badly mixed with the background because they are so narrow. A great part of the width has pixels which are a mixture of the background and the right hair or whisker color. Low resolution and JPG compression artefacts make the situation even more difficult.

Pro photographers use very high resolution and they especially prepare the light and background so that the masking of hairs and whiskers is possible.

Your image is a lucky case and you have already got a method which can save a substantial part of the whiskers. If there were more complex or darker background the masking by increasing the contrast would have been less successful. 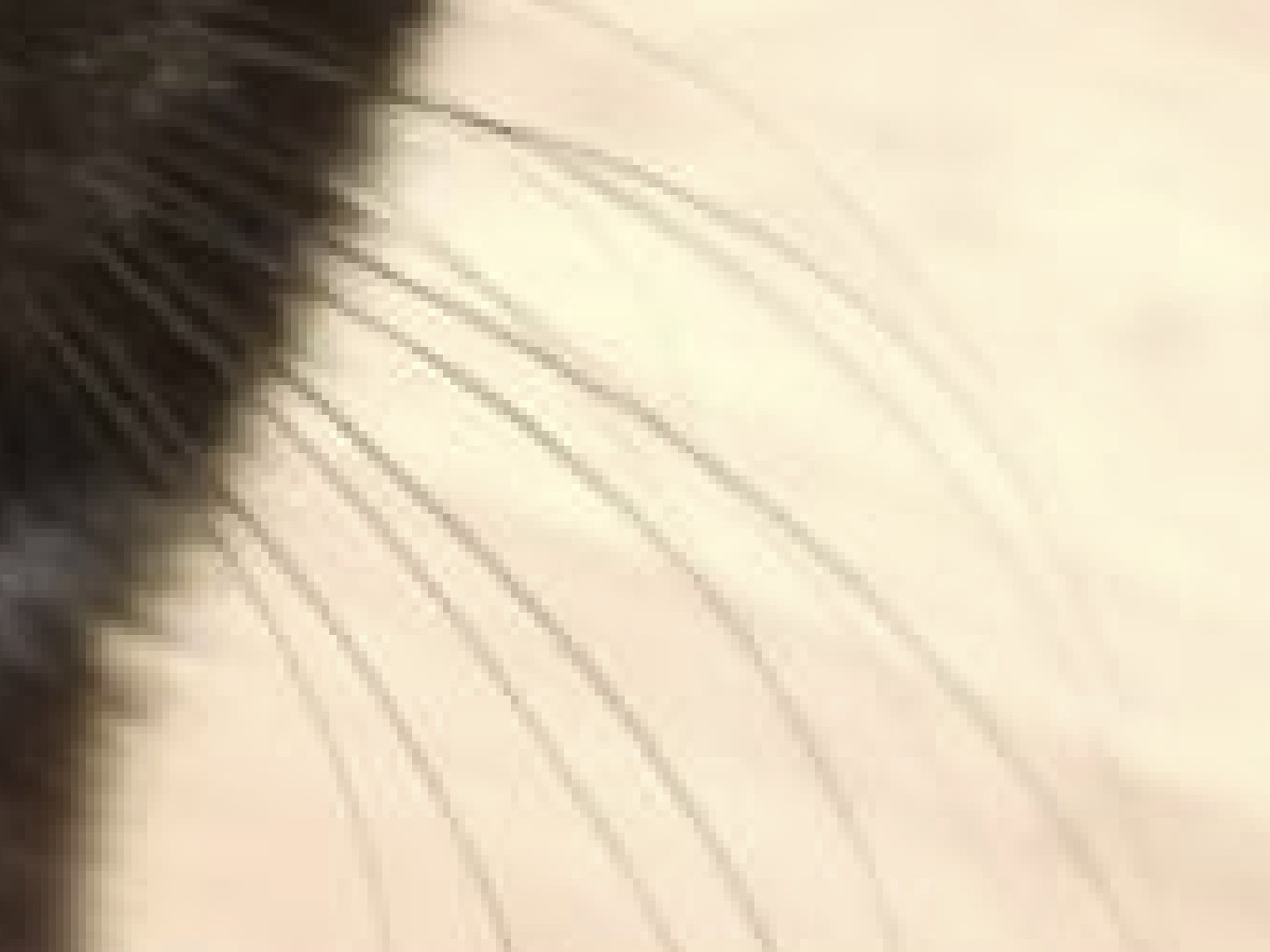 Your original idea (which has been lately removed from the question) to draw the lost whiskers with the pen was just about to be a success. The only missing thing was the lack of flexible enough brush, but that exists in Illustrator. You can make an art brush. Draw a narrow long grey horizontal triangle, drag it to the brushes collection and draw with it the needed curves. Use the pen tool and apply the brush after the curves are right. Use your original photo as a reference (lock it!) 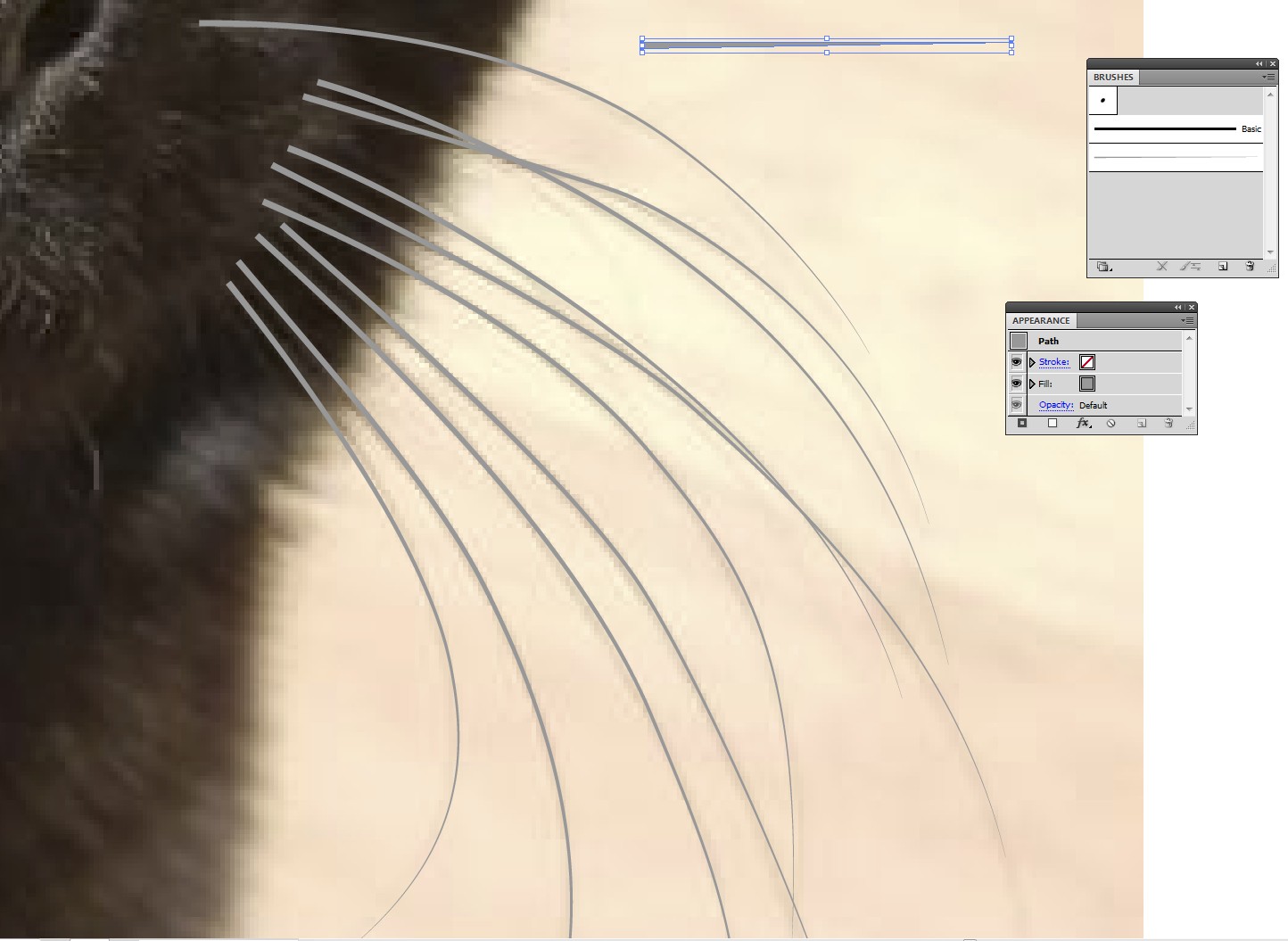 Copy the drawn whiskers to the clipboard and paste them in Photoshop as a new pixel layer to a image where the background and the whiskers along it has been erased. Adjust the brightness, contrast and layer transparency for good appearance. 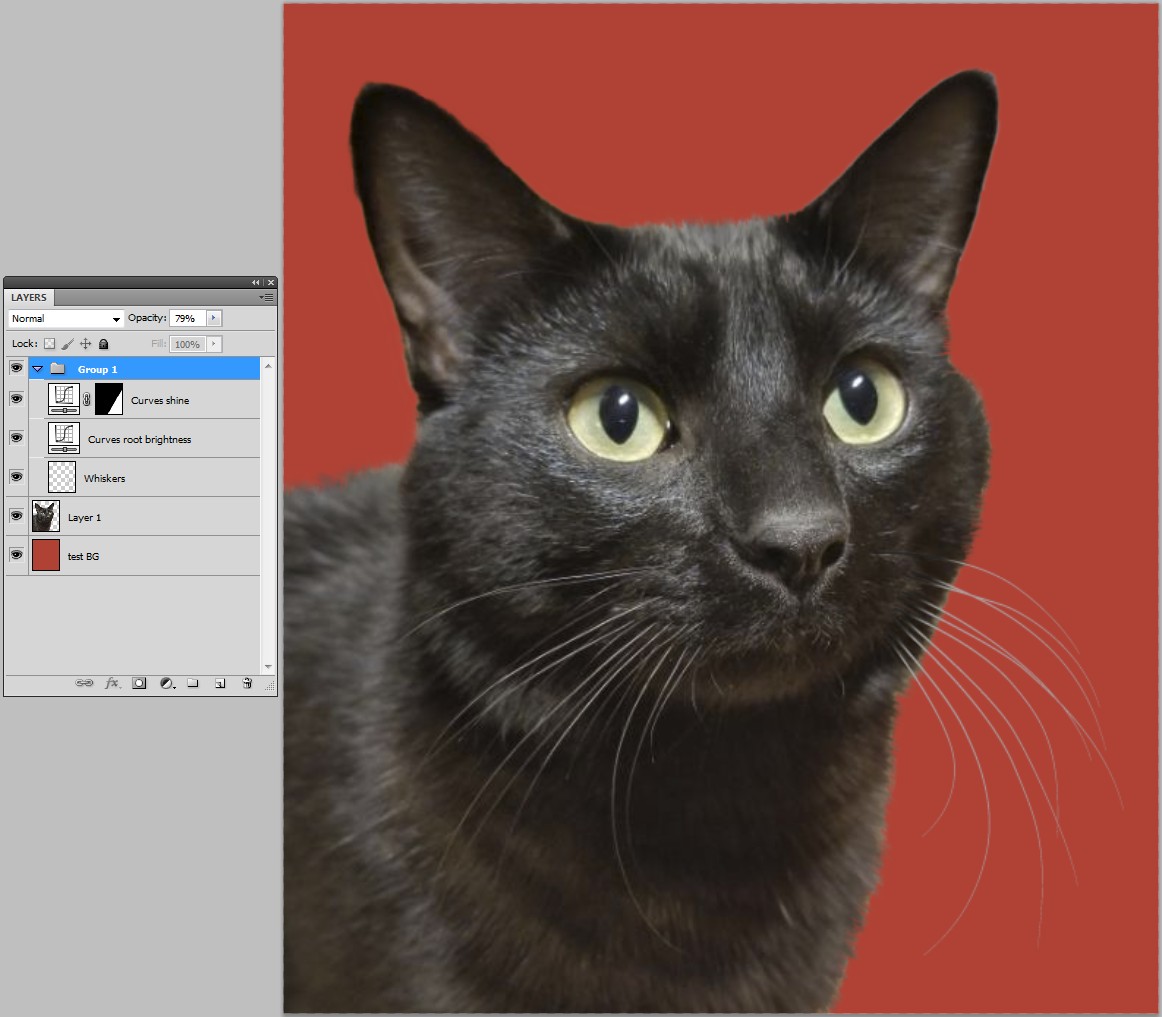 There's a colored test background for proper adjustments. The whisker and it's color adjustment layers are grouped to a layer group which has reduced opacity like the real whiskers in a normal photo do have.

There's 2 curves adjustment layers. The lower curves layer changes the base grey to something which fits the fur (=quite dark). The upper curves layer has a layer mask which makes the whiskers only somehow brighter in the middle to simulate how they shine

This is the color which is matched with the fur: 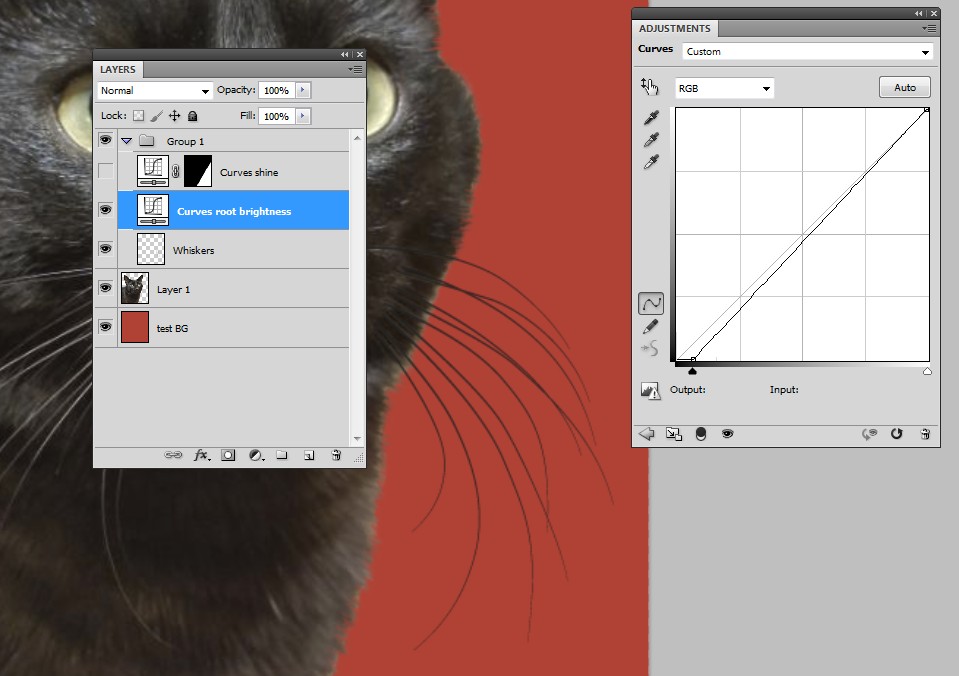 And this is the effect of the upper curves layer: 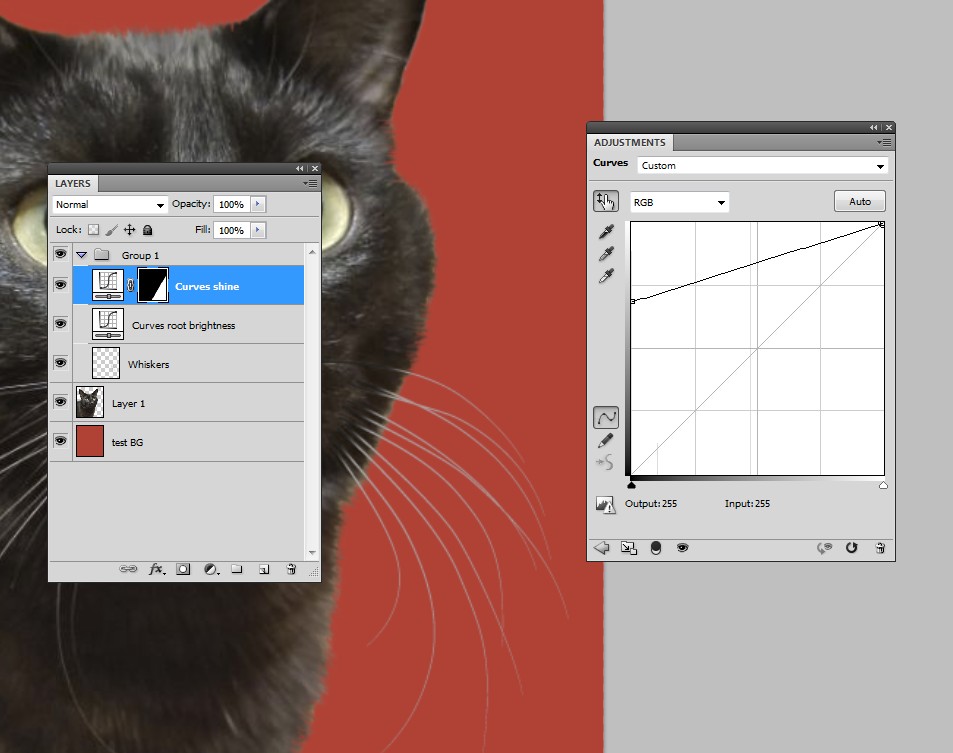 A high zoom view shows that the whiskers are as badly mixed with the background as in your original image, but so it should be to look plausible. The difference is that now you have the control: 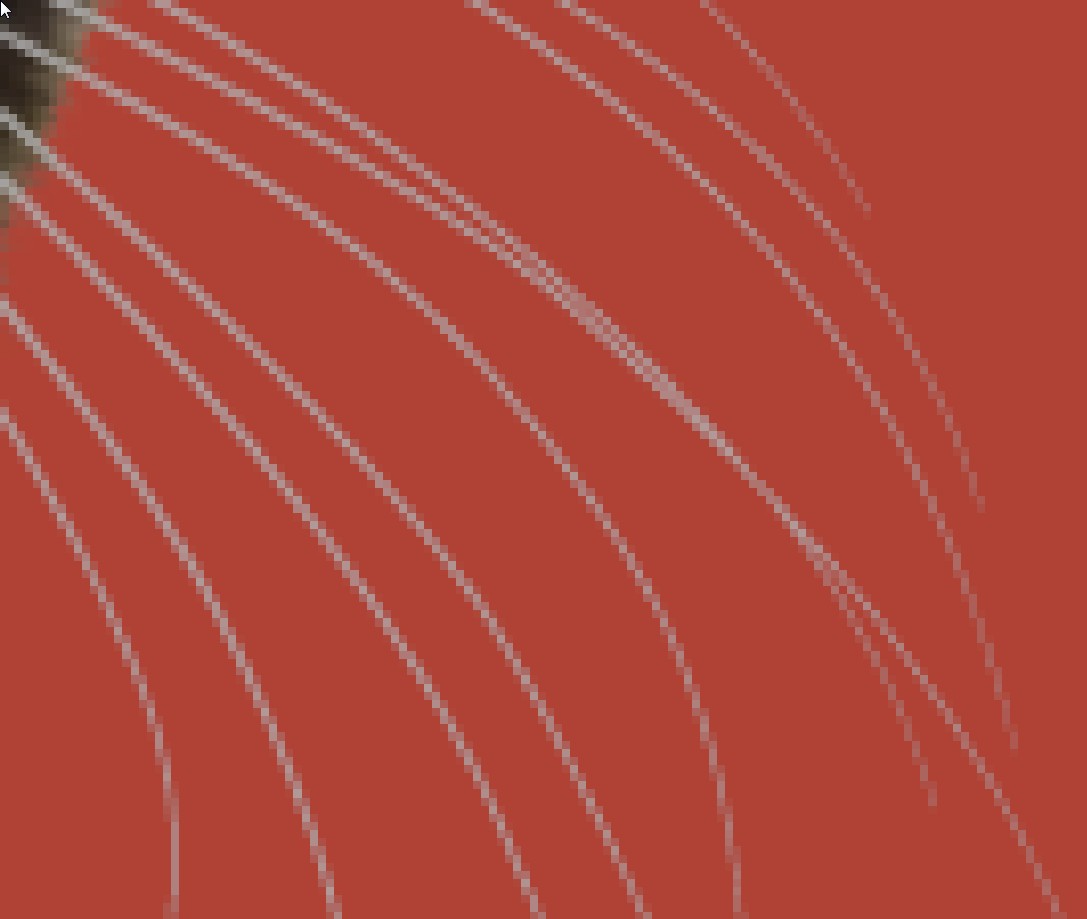 NOT ASKED: The edge of the cat was too clean when a simple BG removal with the quick selection tool was applied. That happens often when one tries to be fast. The edge is re-roughened with the smudge tool. The used brush was one of the default multiparticle brushes.

Not the answer you're looking for? Browse other questions tagged adobe-photoshop workflow background-removal or ask your own question.

2
Isolate a Collection of Thin Lines from a Photograph
1
How to align the object on every page to the bottom for multiple pages in InDesign?
4
Print true black from Photoshop
1
Remove white background from white object in Photoshop
3
How to prepare pencil sketches for printing in a book?
3
Quick method for adding bleed to masked images?
1
How to make the cropping edges hard - no automatic feathering wanted!
2
How do I create a fuzzy fade-out-to-transparent blur effect on the background of an image in PhotoShop
2
How to remove a digonal line that intersects mutiple background patterns?
4
Rendering 3D model with animation as pixel art