Line lengths on paper for a resume layout

I want to layout a resume.

The requirements slightly conflict, but are:

I especially want to ask about line length fitted onto A4 paper.

The optimal line length for your body text is considered to be 50-60 characters per line, including spaces (“Typographie”, E. Ruder). Other sources suggest that up to 75 characters is acceptable.

My current layout looks like this (too small to read, 30% regular size, to not be spammy):

I think it looks good and is readable -- because it has different kinds of information in different places, and when you are reading text then it's clear what section that text belongs to.

My immediate problem is that I'd like to get more text onto the page -- especially two or three more items into the "chronological resume" on the first page, possibly instead of (i.e. replacing some of the space that's occupied by) the "functional resume" on the second page.

A simple way to get extra usable space is to use two/both columns on the first page, like this: 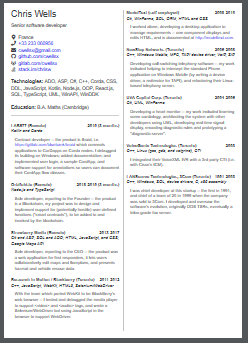 To fix the above I spread the header information across the top of the page: 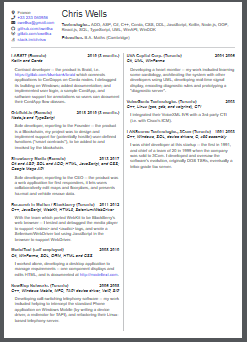 For reference the one-column version looks like this -- so there's no room there to add extra text; you can see why it's inefficient (wasted whitespace); and that's 110 characters per line: 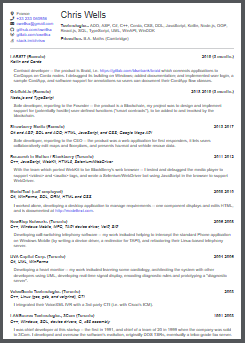 50-60 characters per line is indeed within a 'recommended' range, but that's subjective. With the right design, you should not worry about this number too much. Certainly nobody's going to count how many characters you have per line.

Version 3 looks ok, but needs a bit more spacing on the margins and in between columns. Also, main header section on page 1 could be centered and better spaced out. Second page should also use a 2-column setup from top to bottom.

To keep page count under control you have a few options:

Also, don't be afraid of a little white space here and there. Whitespace is the key to good design, and making everything fit from one corner to the other will pretty much signal a bad (or at least, crammed) design. Allow decent spacing around the initial section (name, contacts, etc).

What is the main difference between photos 1 and 2? 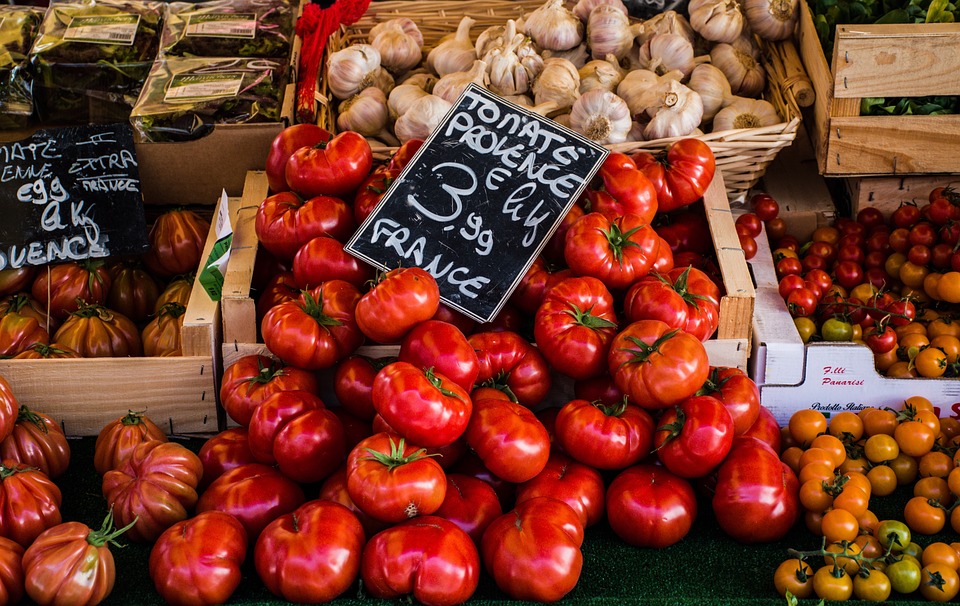 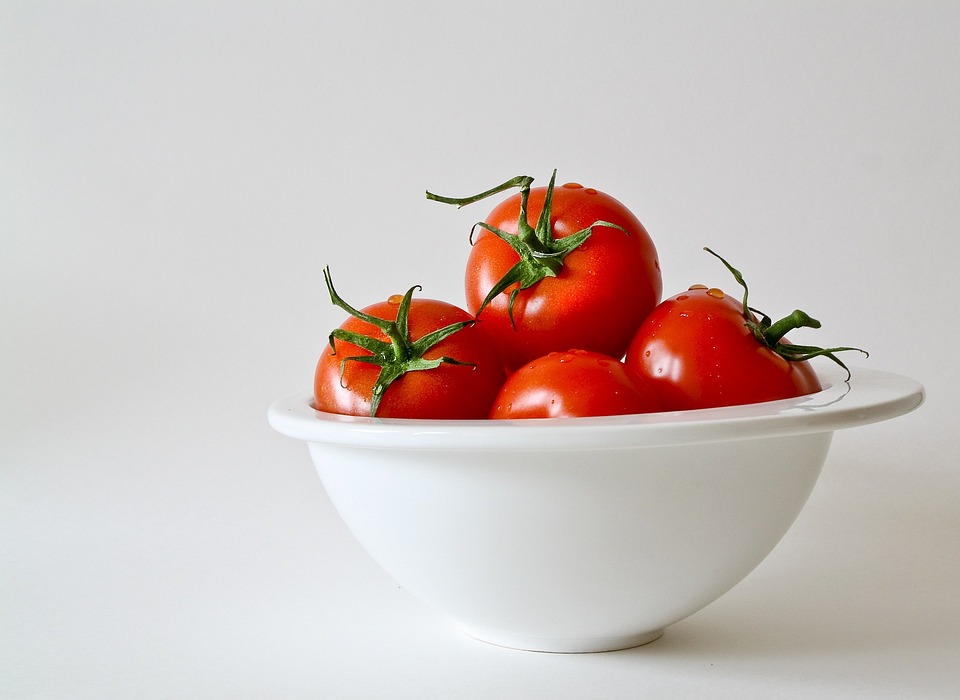 Do not clog information. People want to see specific information, not all of it, but the relevant one.

You are worried about a specific issue, characters per line, where that is not important. One more relevant question is if you are organizing your information, both hierarchy (structure) and visually (space).

Here there is no visual clue on where a section starts and where is the next section... if it is any.

Here is an image with exactly the same image layout with those tips applied.

Space and visual clues on sections. 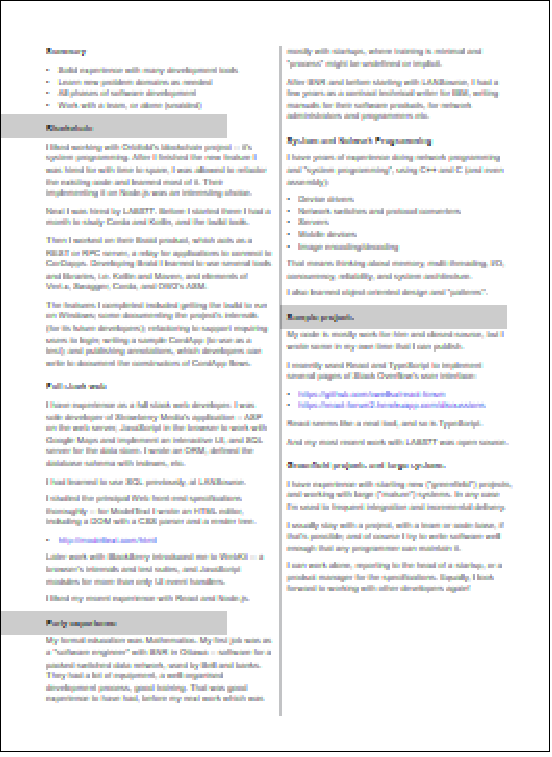 But you can do that in the gutters, in the paragraphs, in the title.

Take a look at some premade CV templates and analyze those 2 aspects: Space and sections.

Thank you, Lucian and Rafael, for your answers.

Here's a revision (of my "version 3") which includes most of your suggestions. 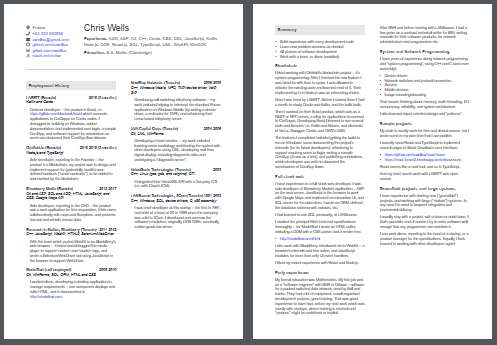 I also removed the vertical line from the column gutter, but I kept the horizontal line (plus more vertical space) to separate the header on the first page.

Thank you very much -- I think it looks more adequate and interesting, and is more readable.

Then here is the same, changing only the fontface -- this uses "Roboto Condensed" for all the details, and "Roboto" for all the headers: 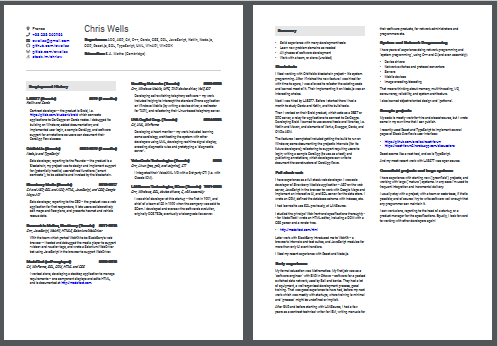 As I expected, it doesn't save very much space -- e.g. 3 lines of text in the left-hand column of the first page.

It was interesting to compare the two reading experiences (when it's full-size):

If space isn't an object (and the choice of font doesn't affect that much), I wonder which is preferable.

Here's a final version after some further discussion in chat. 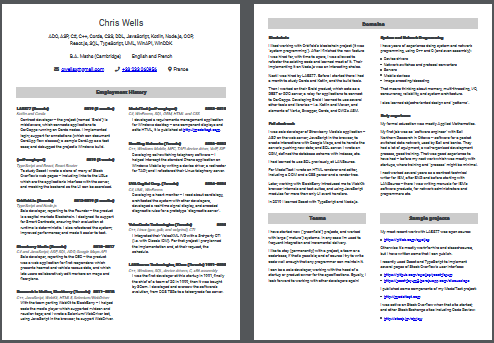 2
Simplest Program to create alternating page layouts
1
How do I make overset text automatically flow into adjacent columns, in Photoshop
2
indesign delete first page in layout
8
Is it possible to determine how many columns a web design grid has?
1
Long document with two independetly running columns
3
Is there a way to spread a paragraph over all of a text frame's columns in InDesign?
0
Which of the following layouts is best for a print/digital publication?
8
Critique / improvements regarding page layout