I need to process all images in folder from png to svg. My usual workflow is using Inkscape and doing it manually for each file. Since this is repetitive operation and I usually have image with 2 or 3 colors task is simple but time consuming nonetheless. When I found out that inkscape can be controlled from bash I went out to try and create batch script.

I have this script which opens image in Inkscape selects it and attempts to trace it to vector.

"image.png" is input image, --verb argument passes command to select all and to trace selection

And that is fine except that verb SelectionTrace simply opens up dialog box for that and I don't know way of controlling that window with bash or verbs. 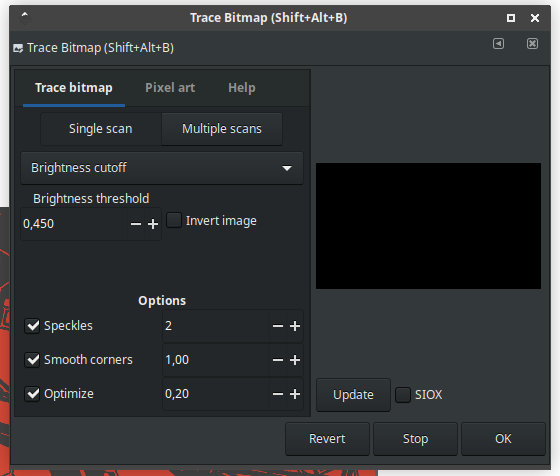 Somewhere I've read that you need to create custom verb(extension I guess) which does what you need to do and then use that in verb argument. Issue with that is that there is no example of similar extension already done.

Browse other questions tagged vector inkscape batch-processing or ask your own question.

1
Photoshop Batch save under unique names when cutting images apart
4
Using imaging software to turn images into colouring-in activities
2
How can I 'flatten' thousands of paths quickly in a vector image?
11
Inkscape - Feynman Diagrams
1
inkscape: how to keep raster quality/detail when scaling down?
0
How can I use clipping masks in libre software without side effects when creating a print-ready EPS file for fabric?
1
Inkscape multi-closed-region multi-lined path
0
Batch polar coordinate conversion