I am looking for information on what software to use to create renders like these. I specifically refer to the Bottle and liquid.

I have seen a few bottles done in different angles and I think they look fantastic! I also want to be able to create this shape of bottle and cap in said program. The bottle in this image may look like a photograph but there are renders that can be done like this. 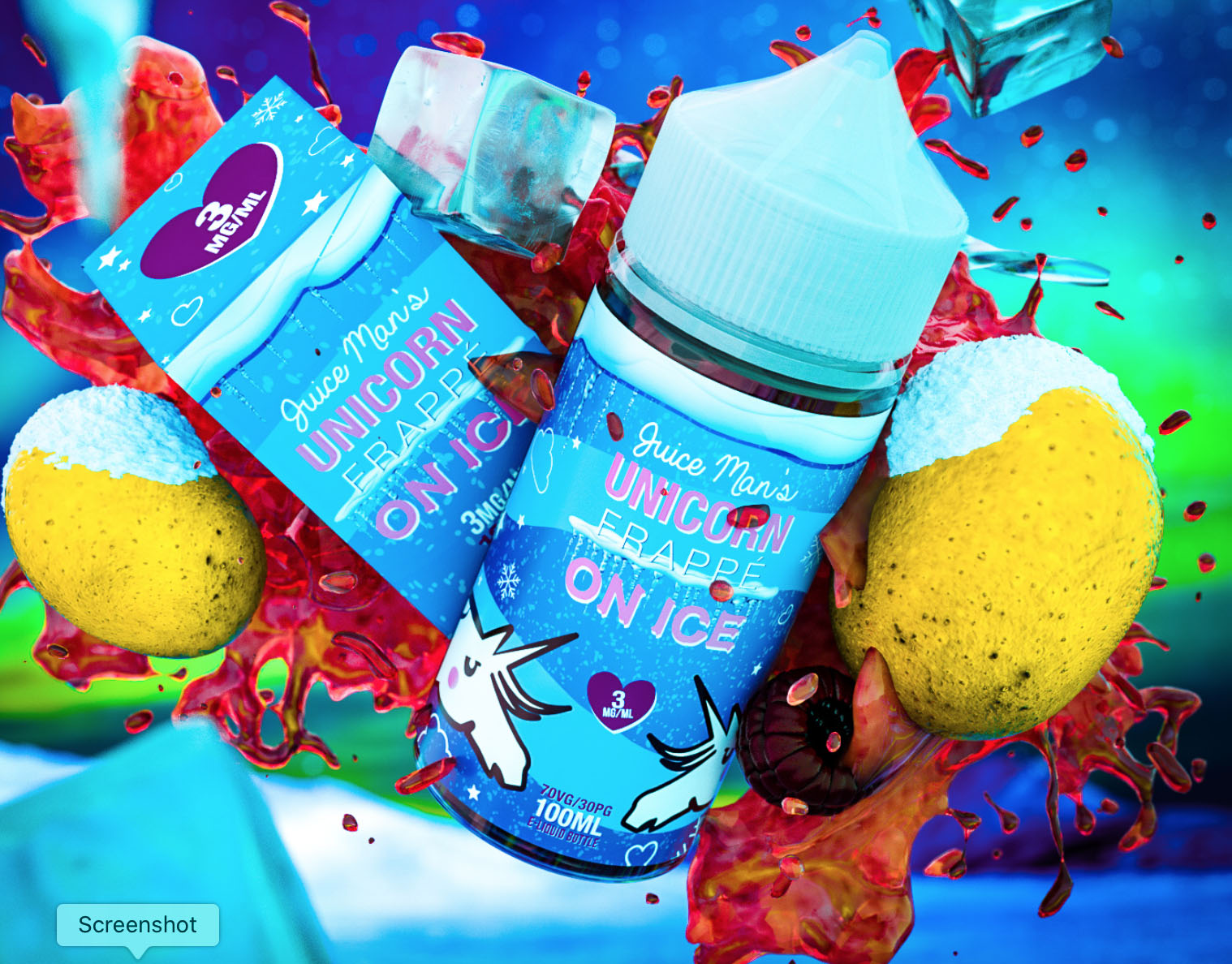 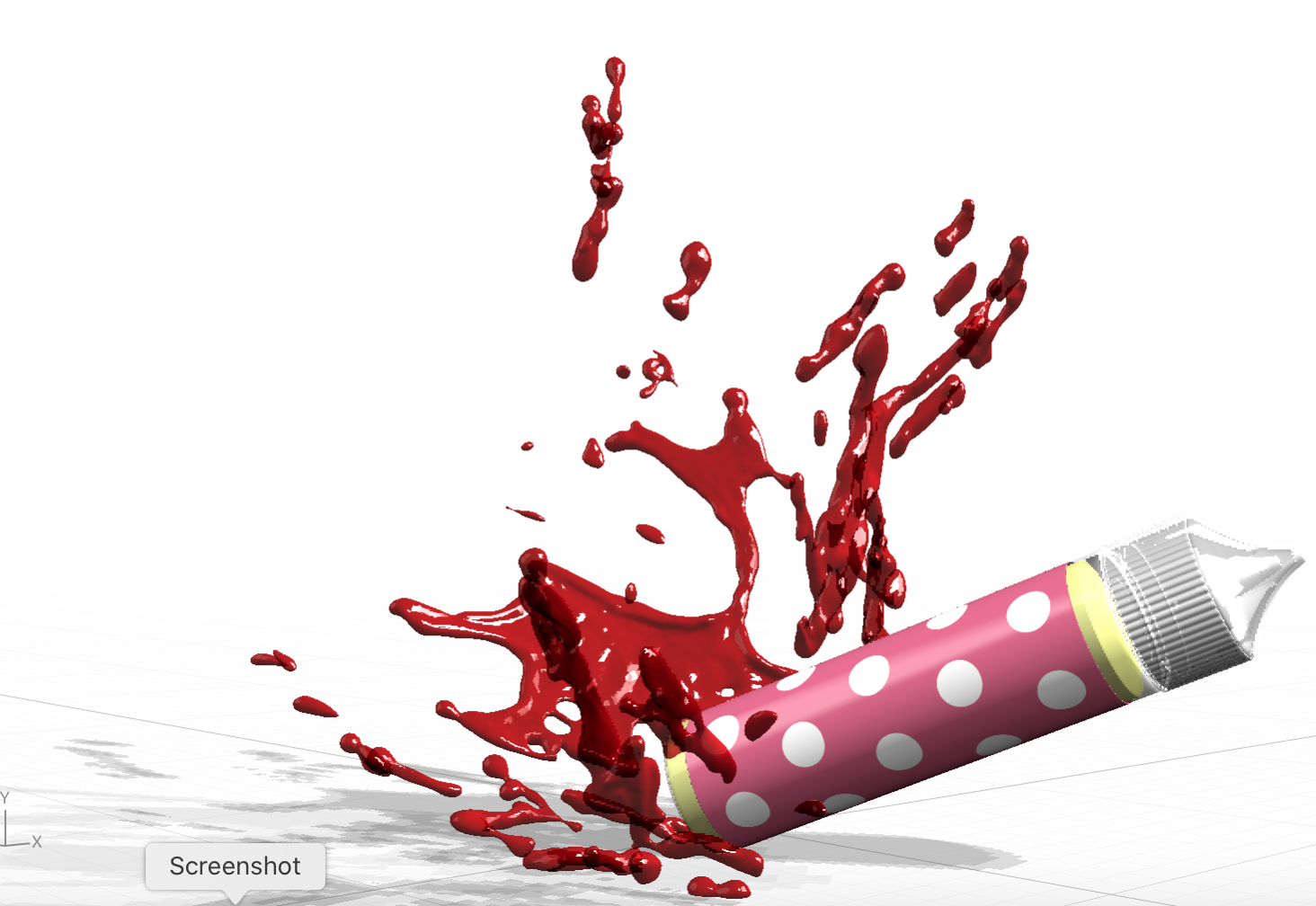 Now, in 2020 I would not use commercial software for this unless you are in a specific pipeline (with some VFX studio) or have a specific feature you need that is not included in Blender, and I must say they are very rare.

Let's take a look at some good examples.

First of all, Blender has a built-in fluid simulator, smoke simulator, photorealistic render, real-time render, sculpting tools, physics, particles... and it's free, (but not cheap).

Take a look at a general gallery: https://blenderartists.org/tags/featured

Some specific for fluids.

And it has a community here: https://blender.stackexchange.com/

I must add something. You can make a lot of things with the built-in fluid simulator. But if you want to spend some bucks take a look at add on which makes additional things, like the foam formed when a fluid is agitated and smaller particles. The difference is the scale.

With the internal simulator, you can easily make the scale you have on your image, let's say the splash made with a bucket. With the add on it simulates the scale of a tsunami.

You've already been pointed in comments to one 3D DCC (Digital Content Creation) tool - Blender, which is an amazingly powerful and feature rich program, especially given that it's both open-source and freeware. It's a great choice.

I'm going to point out there are dozens of such 3D DCC (Digital Content Creation) tools out there, and one often used in the packing design industry is one I myself use a lot - modo.

There are both already in-built tools (see video link below) dedicated to that kind of design need, and even some package-design specific expansions to modo which make it a super-efficient and effective tool for this kind of task - see PACK kit.

Note that as is the case with most / many 3D DCC (Digital Content Creation) tools, they offer a 30-day free trial - and there are no watermarks or anything annoying like that - it just works.

Here's a render from one of my experiments some years ago with Modo and glass and liquids - everything modeled and textured and lit by me - no add-ons or pre-made content at all. 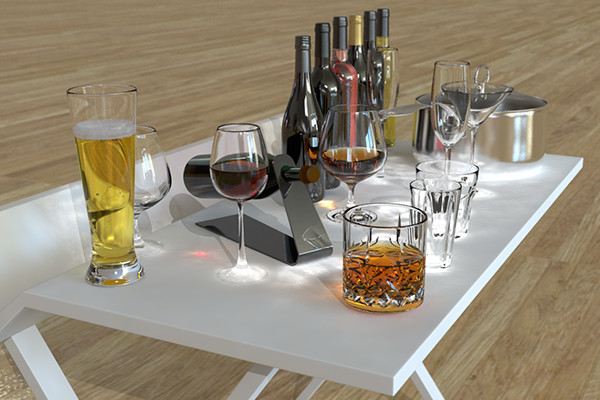 And this is a more recent model in the style of a well-known building toy whose name we shan't mention... 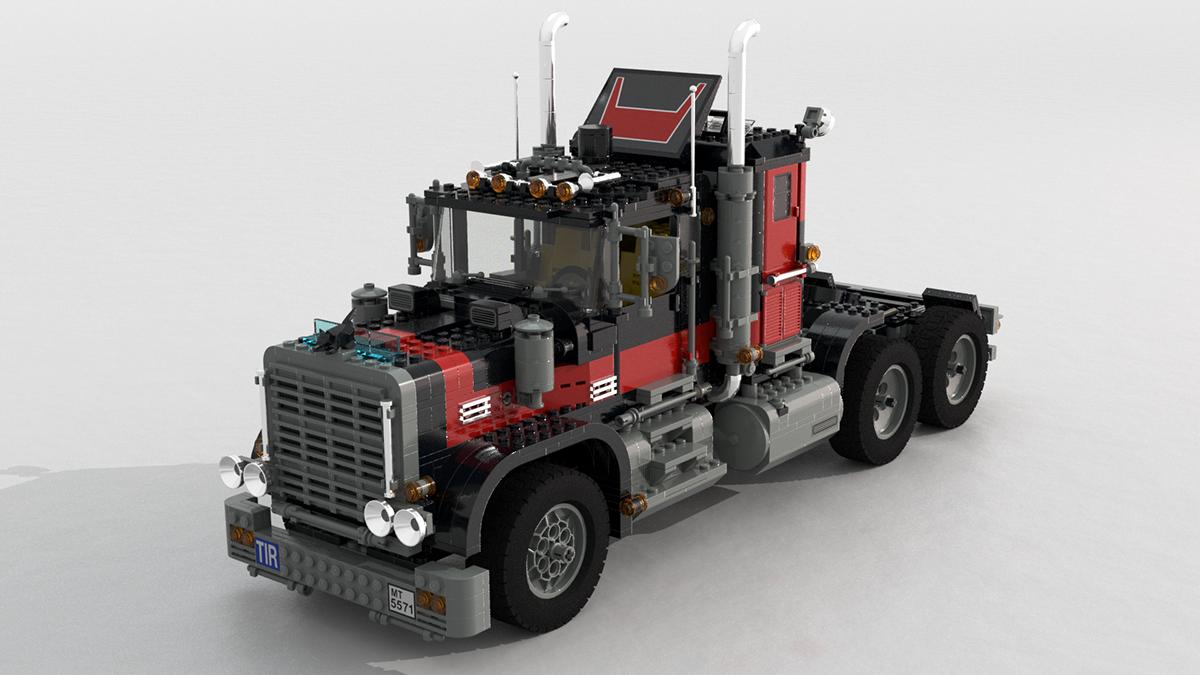 For my workflows and way of thinking, I find that modo is the way to go - that said, as I said initially - Blender is an excellent choice for any general 3D tasks.

Simple 3D programs do not have photorealistic materials nor rendering. They cannot for ex. handle glass transparency, light refraction nor metallic glosses.

Illustrator's 3D is even more limited. You can have only extruded or revolved shapes, the grooves in the cap of your bottle is unreachable in Illustrator.

If you can accept non-photorealistic shading and limited control on light and camera placements, you can use some entry level CAD program to create the geometry. The rendering result unfortunately will be quite plastic. Placing images on surfaces is the only way to get something else.

The next example has one elementary attempt to make the bottle from scratch in such entry level CAD program. A GDSE screenshot is used as the label. There's 3 differently rotated copies of the same bottle: 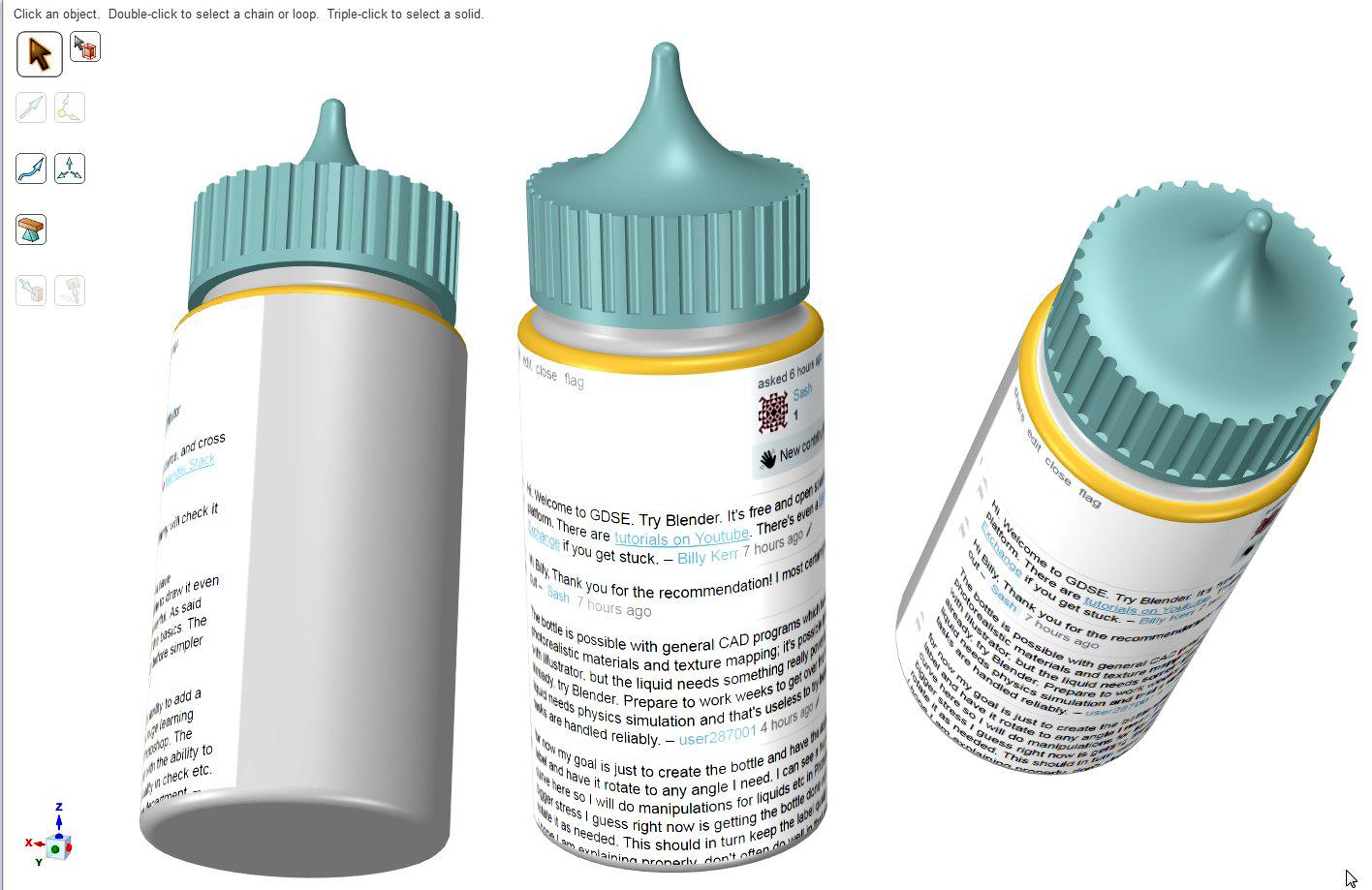 The program is DesignSpark Mechanical (Win 64bit). It's free and so simple that one can be productive in days instead of weeks or months. It has SpaceClaim under the hood, but with quite reduced geometry creation options. That's common with free versions of commercial programs. But it's still much more flexible than Illustrator's 3D.

Sometimes there's a need to place a photo of an existing bottle to an image composition. It's tricky but it's surely useful to know something of it, too. Placing a new label is as necessary. See these, if you are interested:

How do I wrap a label around a bottle

ADD: You have seemingly already got something. Tilted bottle with horizontal liquid surface in 3D needs the liquid inside the bottle. You have got another answer which shows how well high end 3D modelling can make it. A simpler approach is to insert inside the bottle a transparent solid piece which fills the same space that the liquid would take. To make it seem plausible one must have photorealistic materials and rendering which take optical effects refraction and reflection properly into the account. Here's an example with my simple non-photorealistic CAD program:

The green part is a revolution shape sliced to 2 pieces with a 30 degrees tilted temporary plane. The revolved sketch was the same which was used to make the hollow bottle interior, but scaled to 0,5% bigger size to be sure that there's no random gaps caused by rounding errors when the green part is placed inside the bottle.

In the next image the cap is again visible, the yellow ring is colored to grey, the green fill is placed, the composition is tilted 30 degrees and the bottle body is made 50% transparent: 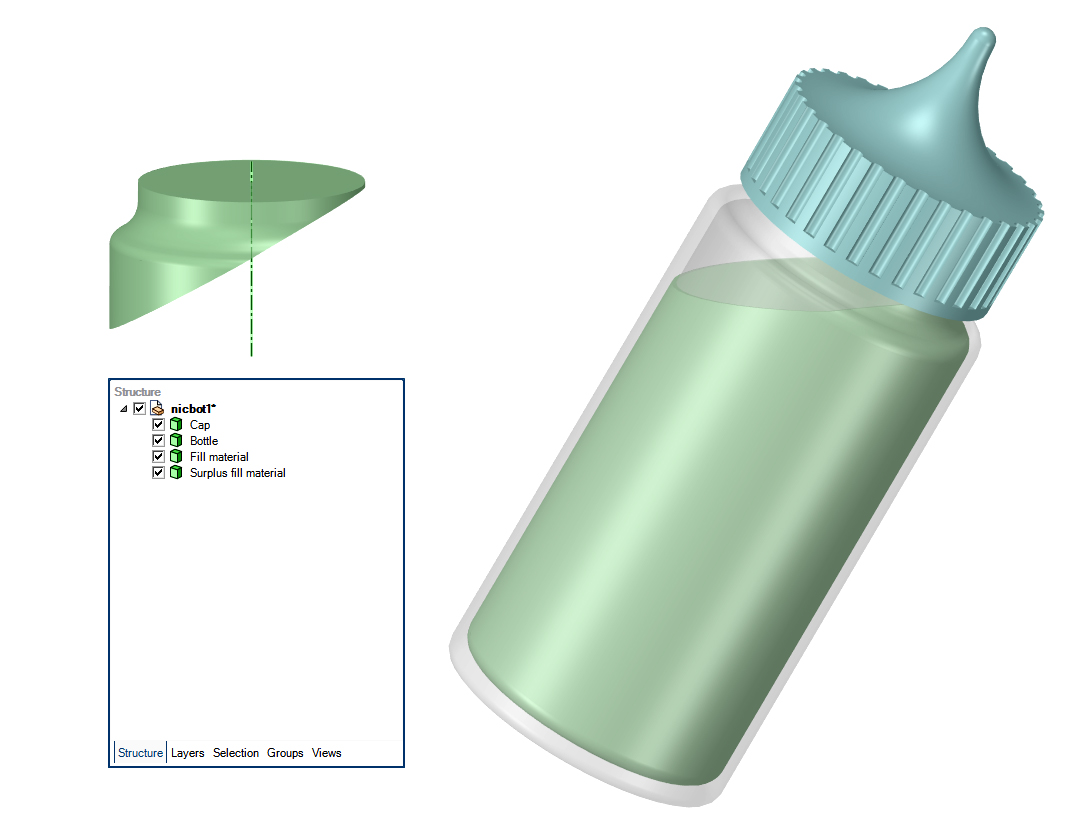 As you see it's not at all plausible due the lack of photorealistic materials and rendering. Transparency without optical effects doesn't make it glass.

So what did you end up doing for this project? I think you'd be better off using stock images of liquid? Maybe find a freelancer to create it for you in 3d? How does the final result look?

2
Photoshop: How to make shadow more realistic
0
How do I wrap a label around a bottle
-1
First steps in learning to create 3D models to use in mockups?

14
Which software renders a planar projection of a 3D object as a vector graphic?
1
Photoshop 3d extrusion renders pixelated paths
3
How can I make consistent designs for similar items?
3
Repetitively place different images mapped to the same bottle?
0
How can you achieve realistic closeup perspective in Photoshop using 3D Postcard feature?
0
Does this fall under 2D Animation or 3D Animation?