How to manually blur more layers at once in Photoshop

I am working on a map exported from GIS software. It is on a white background and has very sharp edges. When I try to automatically blur the edge it is not working well because it is curved a lot. I am doing it with 'refine edge' tool (there might be a better one?).

Best for me is to manually blur the edge on the whole image. It will take time but I am willing to do it. Problem is that I have more similar maps. All of them are the same spatially, just with different colors.

It will be great to be able to blur the edges on all of them together. Or maybe to make some kind of manually blurred mask which I would later apply on the other maps.

Is there such an option? Thanks a lot. 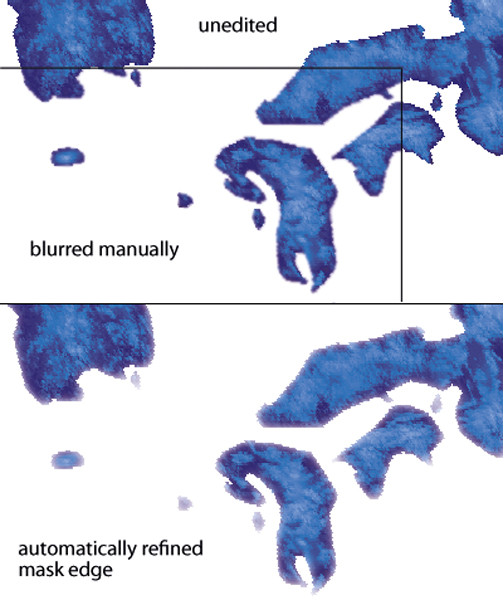 One way to blur just the edge of something is to remove its background, duplicate it and blur the lower layer. That way you retain a sharp top layer and jus get the blurred edges. It may require some additional cleanup from the top layer, but with something like a map, maybe not. In most cases, this is pretty simple to do and also not incredibly helpful. Especially in this case, which is pretty extreme.

In this case, since the goal is to make the edge quality better, I would try the automatic image trace in Illustrator and use its edge. I mean... looking at the map I wonder if you could just use the vector image traced by AI and call it a day... but assuming you have to keep most of the raster map as it is, you could try this:

Not the answer you're looking for? Browse other questions tagged adobe-photoshop mask blur or ask your own question.

0
How to select an edge in Photoshop CS6 that is not quite horizontal or vertical?
1
Smooth color edges
4
Adjustment layers do not apply after merging layers. Why?
1
Match the brightness on X layers at once in Photoshop
2
Achieve a tilt-shiftesque effect in Illustrator
1
How can I copy from and scale multiple images at once?
5
How to represent blurry artwork with vectors (Illustrator or SVG)?