I took a photo of my grandfathers medal cabinet. 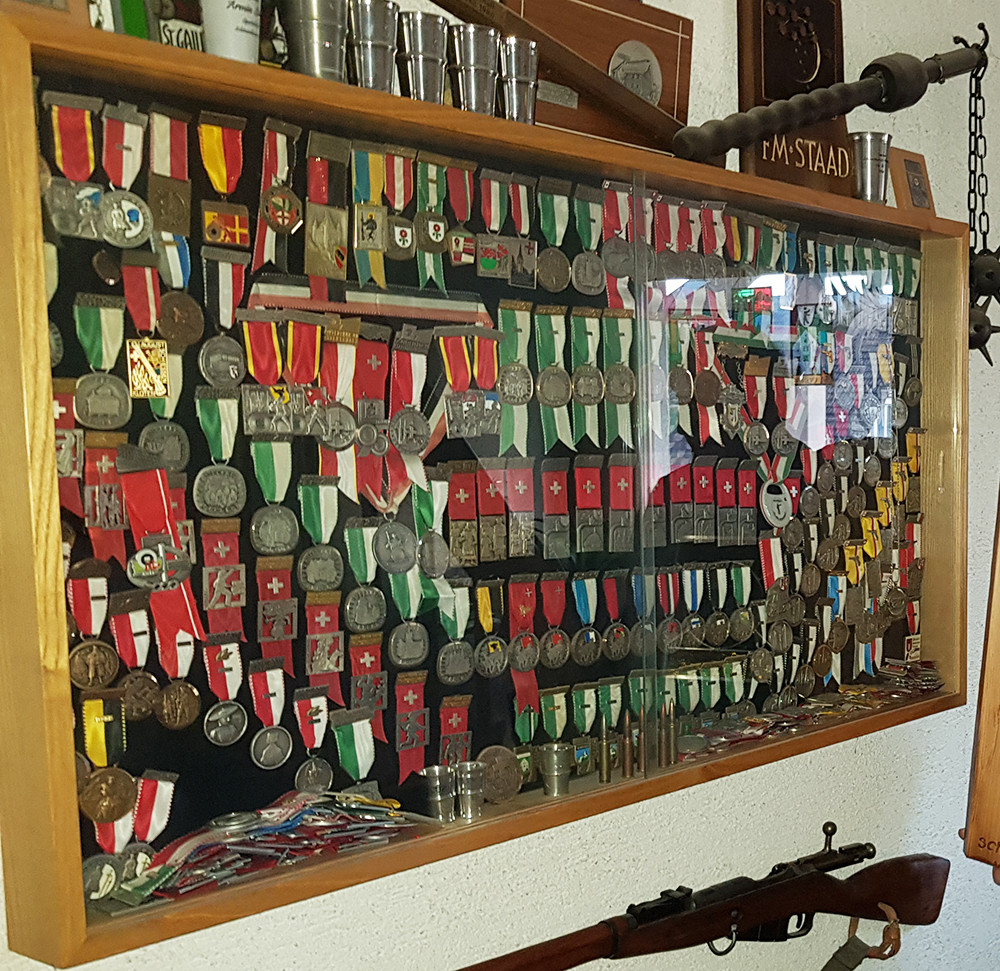 I want to get rid of the reflection and make the medals below it visible, just like the other medals.

I found this article but either I'm doing it wrong or I have the wrong tool since my Photoshop is in German and I can't find the correct tool.

Does anybody know a trick what to do here?

Someone who appears to be smart when nobody asks probably has already suggested that delete the glossy area and let Photoshop insert a content-aware fill. I guess it will not work, but trying it costs only few seconds.

I guess this is a hopeless case if you expect exact results and you have nothing else but this JPG file. What's under the nearly white gloss can only be guessed. If you had a RAW image file the higher resolution of it could reveal a substantial amount of details.

At first RAW processing alone can fade large glossy areas if one inserts local contrast. Developing the RAW to 48 bit per pixel (=16 bit color depth) RGB image instead of the usual 24 bit (=8 bit color depth) gives a possibility to insert in Photoshop a level shift adjustment layer which uses the gloss as a layer mask to limit the effect to the gloss area.

Other possibilities: copy (=clone) the missing content from elsewhere (useless if nothing acceptable is available). A photo taken from different direction can be used if one can distort the copied content to the right viewing angle. You must rebuild the missing items one by one. That's a big job but it's doable if the missing content exists in other photos or can be duplicated from this photo (+distort). Photoshop's multi-layer workspace will be in a good use.

The best solution is to reshoot the image without a glossy background or removing at first the protective glasses temporarily. Polarization lens filter and having only polarized light is a common trick if the glasses cannot be removed. TFT computer screens (not all models) with white image produce perfect linearly polarized light. Its gloss from glass can be neutralized by adjusting the polarizing lens filter in the camera.

If you have several shots of the target taken from different directions so that everything can be found as gloss-free in some photo you can try Photoshop's automatic panorama stitcher or any other photo panorama stitcher. Input the images cropped so that the glossy area is out of the every image.

Finally here's an fixing attempt in Photoshop. It cannot find the lost details, but at least the gloss doesn't jump on the face: 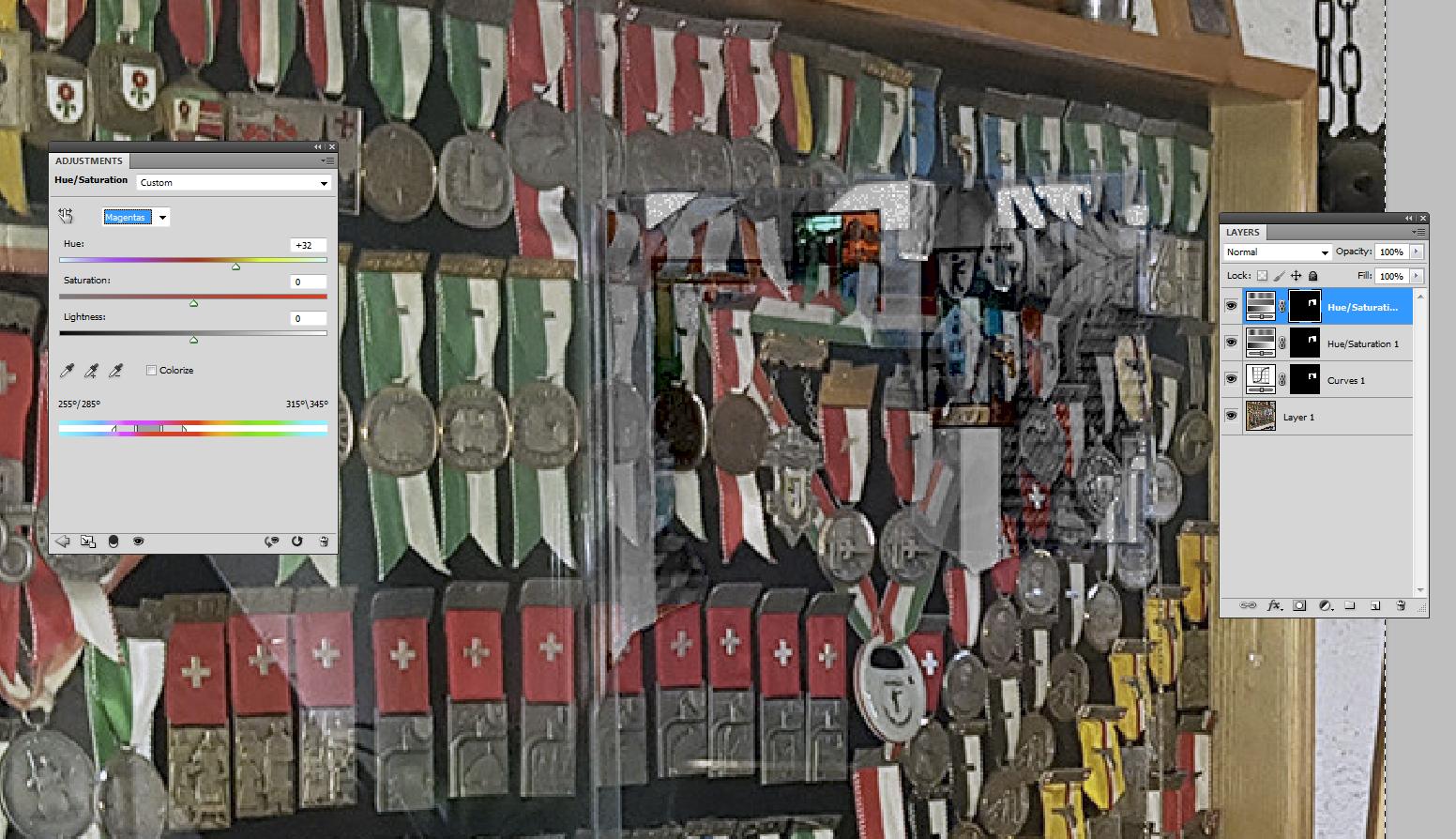 At first the white balance were adjusted to less yellow.

Then the color mode was changed to Lab to make lightness and color less dependent on each other.

3 adjustment layers were inserted. The curves layer simply tries to subtract the gloss, the black end of the curve is shifted to the right to make the dark end linearly darker. Lab mode prevents this to increase the color saturation.

On the top the other hue-saturation layer shifts the distorted nearly magenta reds back to red.

The light grey areas are the clipped full whites in the original image.

BTW. This was got with delete and content-aware fill: 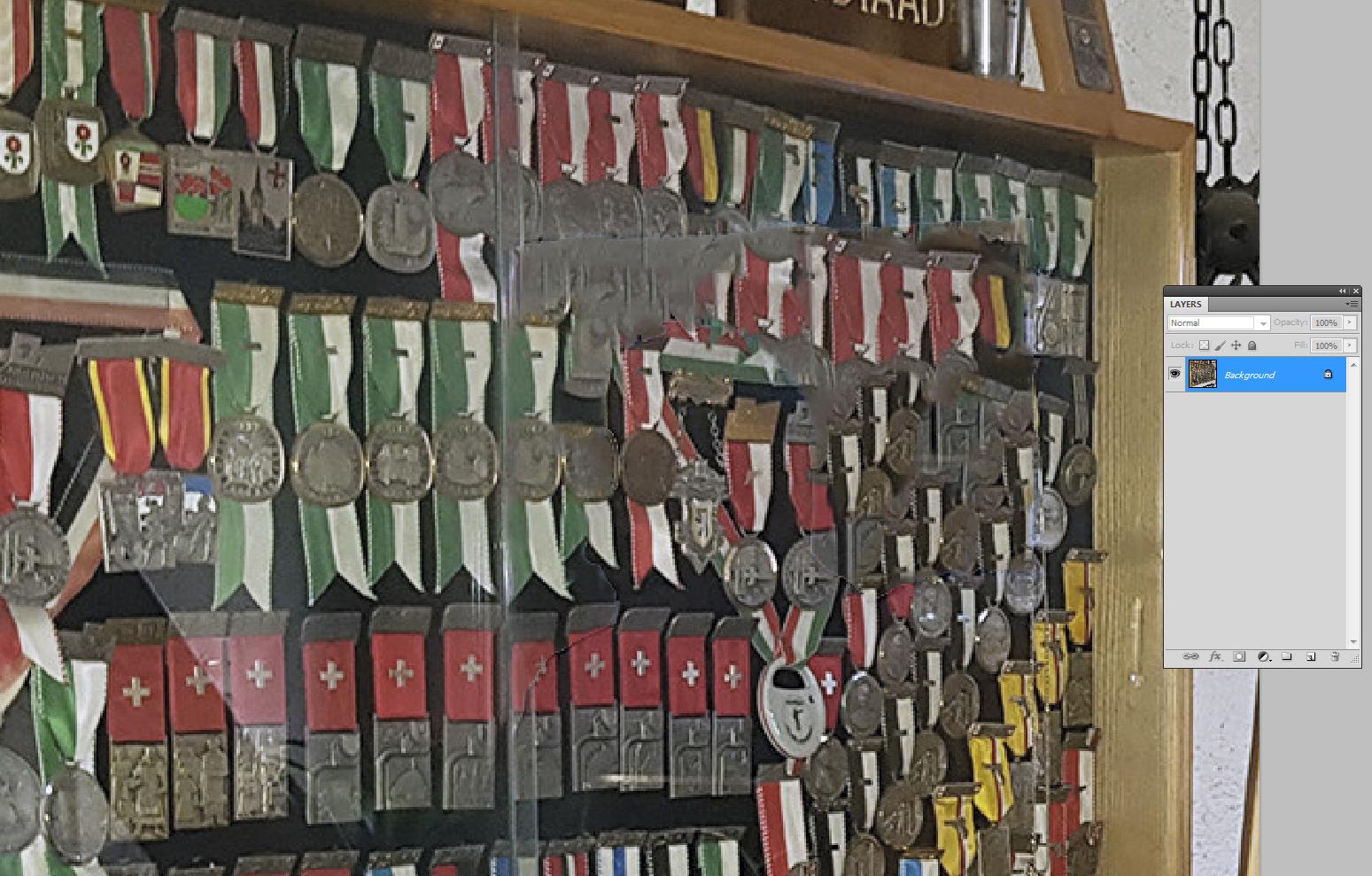 It's not worse that trying to make the impossible with adjustments.

Not the answer you're looking for? Browse other questions tagged adobe-photoshop photo-editing reflection or ask your own question.

3
Blurred Stroke on Circles in Photoshop
1
What is the name of the old manual sizing tool for measuring photos, to be used in offset printing?
0
How to create matte black paper on Photoshop?
1
Is there a fast way to correct color differences in Photoshop CS6
0
Photoshop Composite: Glass Reflection
0
What is the best way to increase a selected area over another area in a image using photoshop
3
How do you find right plane/perspective to place a product on a photo?