How to deduplicate paths from a LiveTrace operation?

I vectorized a raster image with LiveTrace and want to turn it into a line drawing for children to color.

Here is part of the design, which covers the mouth:

Here is the original design as a line drawing (stroke and no fill):

I want a line drawing similar to the above where the paths are simplified, otherwise tiny children will lose patience coloring every small patch.

When I expand the LiveTrace object, each anchor point is specified twice, e.g. once for the white of the teeth and again for the light green of the gums. In the above line drawing, the result is that the outer line looks lighter than the inside lines. As another, in the image below, I moved one of the anchor points on the right and not the other, and it created a vacuum between them:

I want to remove color and deduplicate paths, so I can then use the Object > Path > Simplify tool. When I run it now, the simplification moves each of the duplicate lines in different ways, so it creates either an overlap or a vacuum. I used an extreme case of 60% accuracy and 10º angle so the result shows:

How can I deduplicate the paths to avoid vacuum and overlap in path simplification?

Simplifying a path will change its position in almost all instances.

Adjusting the amount of simplification will cause less path modification. However, almost 100% of the time if two paths overlap exactly and one or both paths are simplified, the paths will no longer align. It is simply how the Simplify command functions.

If you want accurate path positions with minimal anchor points, you need to manually create or adjust paths.

Because you only want a path for each area, you can probably manually remove many pieces of the trace. There's nothing automated that is going to refine an Image Trace a great deal.

One approximate solution is to delete the areas with alternating colors. In the example above, I deleted opaque green, left dark green, deleted middle green, left light green, and deleted nearly white green. I cleaned up manually one path that had redundant anchor points. Then I ran Path > Simplify with 80% accuracy and 40º angles.

The result with white fill in shapes is: 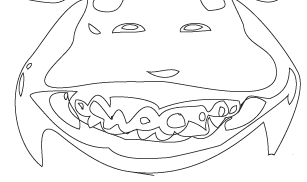 and this overlay shows that it is reasonably close to the original: 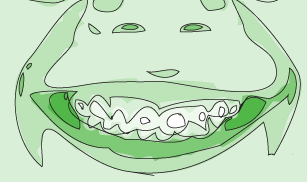 Of course, if two areas with alternating colors are deleted, e.g. opaque green next to middle green, that detail is lost. But the result seems good enough for the purpose of children drawing a fill-in sheet.

Not the answer you're looking for? Browse other questions tagged adobe-illustrator vector path live-trace or ask your own question.

3
How to select paths by size of area or length of perimeter?

14
Can you draw a constrained straight line with GIMP's paths tool?
6
Change all stokes and paths into a 'flat' vector shape
3
Joining Paths to form closed shapes
0
Reopen path or connect two paths that are closed in Illustrator
0
Align grouped paths to other paths
6
Crop closed paths into open paths
1
Joining 2 Paths in Adobe Illustrator
0
Make shapes or objects follow a path symmetrical in illustrator with no overlapping?