I have been using Illustrator's Image Trace (LiveTrace on or before CS5) for many years. I would like to replicate a similar result with open-source software. I assumed that Illustrator would first quantize the raster image into the determined colors and then apply edge-detection with a version of Ramer-Douglas-Peucker for vectors. I get different results in Illustrator or Inkscape, with the original image or with a quantized version of the image.

Here is part of the original image showing a mouth:

and here is the quantized version with 5 clusters (following the OpenCV documentation):

I used these settings for Image Trace: 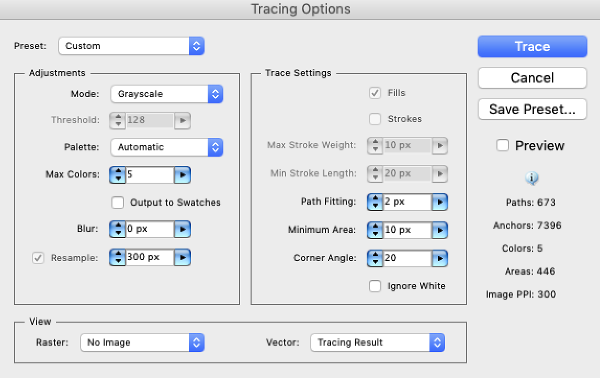 The result with the original image is:

The result with the quantized image is:

The settings in Inkscape are below. I'm not sure if the settings in the top box affect the bottom one. It has fewer settings than Illustrator. 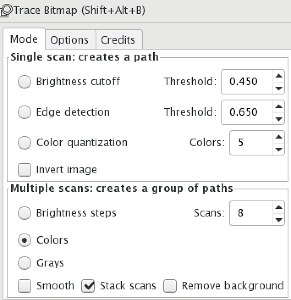 The result with the original image is:

The result with the quantized image is:

I once found a link describing the Image Trace algorithm in a few papers and now can no longer find it. Thanks to @BilleyKerr's comment, I understand that Image Trace is proprietary and probably a trade secret, so I will never know exactly how it works. My questions are:

1
How to image trace halftones in Illustrator
0
Including detail in Image Trace with Adobe Illustrator
6
How to get rid of these outline artifacts in an Inkscape SVG trace?
17
Convert a line drawing from raster to vector **LINES**
2
Possible to link raster Photoshop image to Illustrator to trace real time?
1
Illustrator Image trace: want outline of image, getting unrelated shape
2
Outline-like artifacts in Inkscape bitmap trace?
0
How to deduplicate paths from a LiveTrace operation?