I'm trying to create the following image of a Mobius Strip in illustrator: 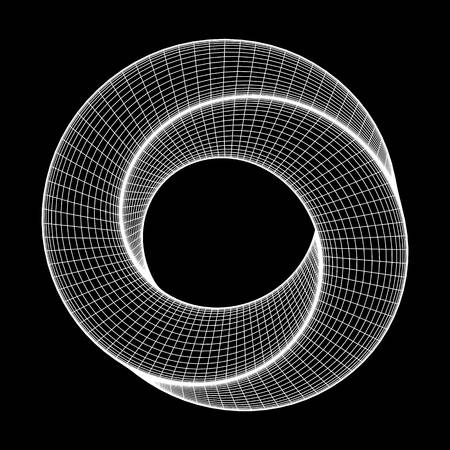 Now I can create the following image in illustrator, by intersecting two circular shapes and using the same tool. 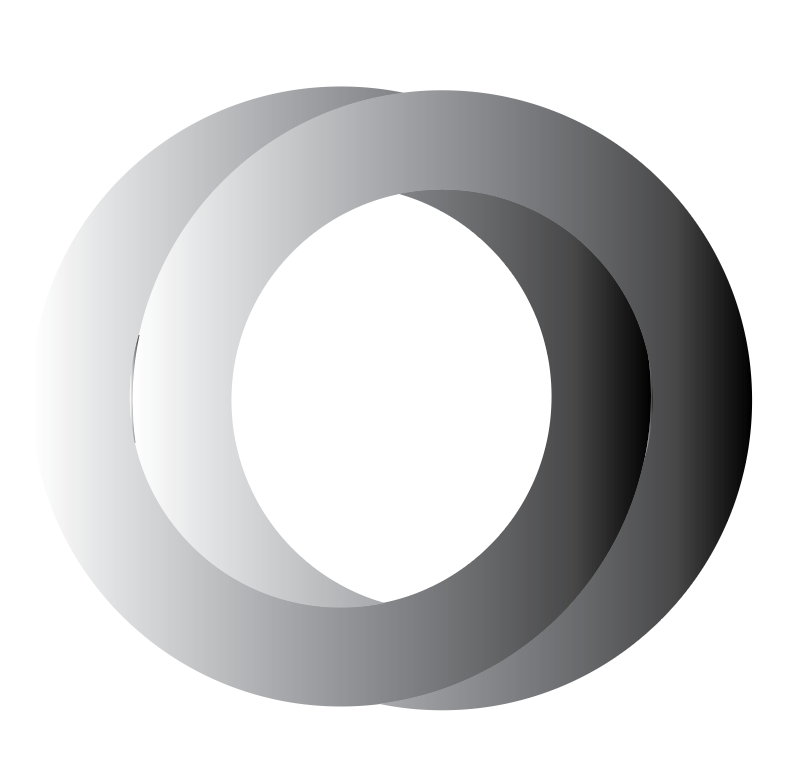 This is kind of similar, however, instead of using a gradient on it, how do I make it with the geometric lines. Thanks in advance!

It's really difficult to achieve this effect.

I used two different shapes to test using them as Art Brushes.

I applied the first one and I use the Widht tool to make the endpoints smaller.

The second I used it as it is.

Some tweaking to the spiral shapes were necessary.

Unfortunately, I could not make the lines interact making them fluid as you can see.

I think it's a good start but there are some other methods probably. 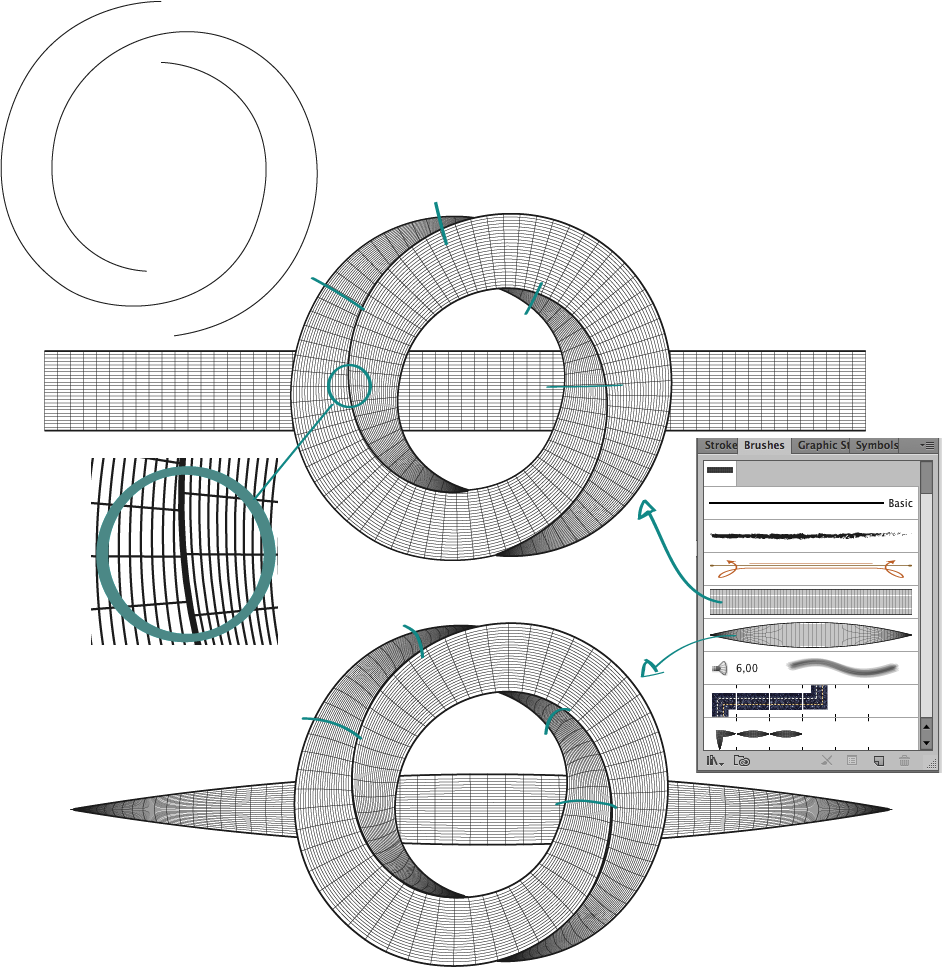 A tricky case as the already existing answer says!

This answer unfortunately must be considered as an oversized comment because it is based on extra tools and the question was about how to make it in Illustrator.

To see how the surface division to squares actually should be drawn in 2D I made a 3D piece in Moi3D, which is a low cost cousin of Rhinoceros. Your Moebius strip isn't a thin strip, but a square profile rectangular bar at first twisted 180 degrees and then mapped along a circle. A grid of squares is mapped onto the surface: 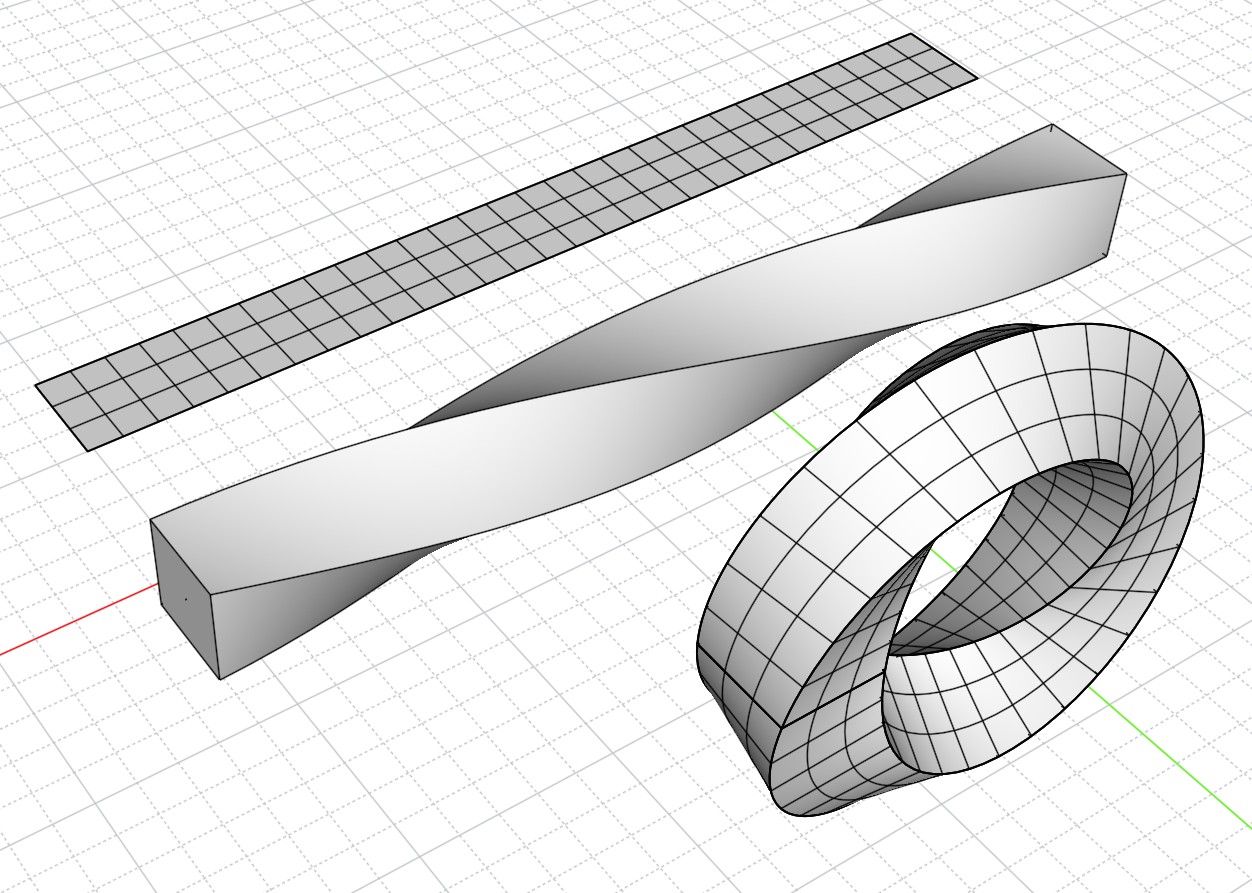 NOTE1: One can spot an error. The square grid is actually 50% too short. The 3D Moebius block has only 2 surfaces, but they are 100% longer than the square grid. It was fixed by placing the grid total 4 times

NOTE2: The cross-section of the twisted bar in your original version is somehow curved, it's not an exact square with straight edges. User GerardFalla has written an analysis of the difference between my version and the original.

The straight on the face projection shows how the radial lines should be in the 2D drawing: 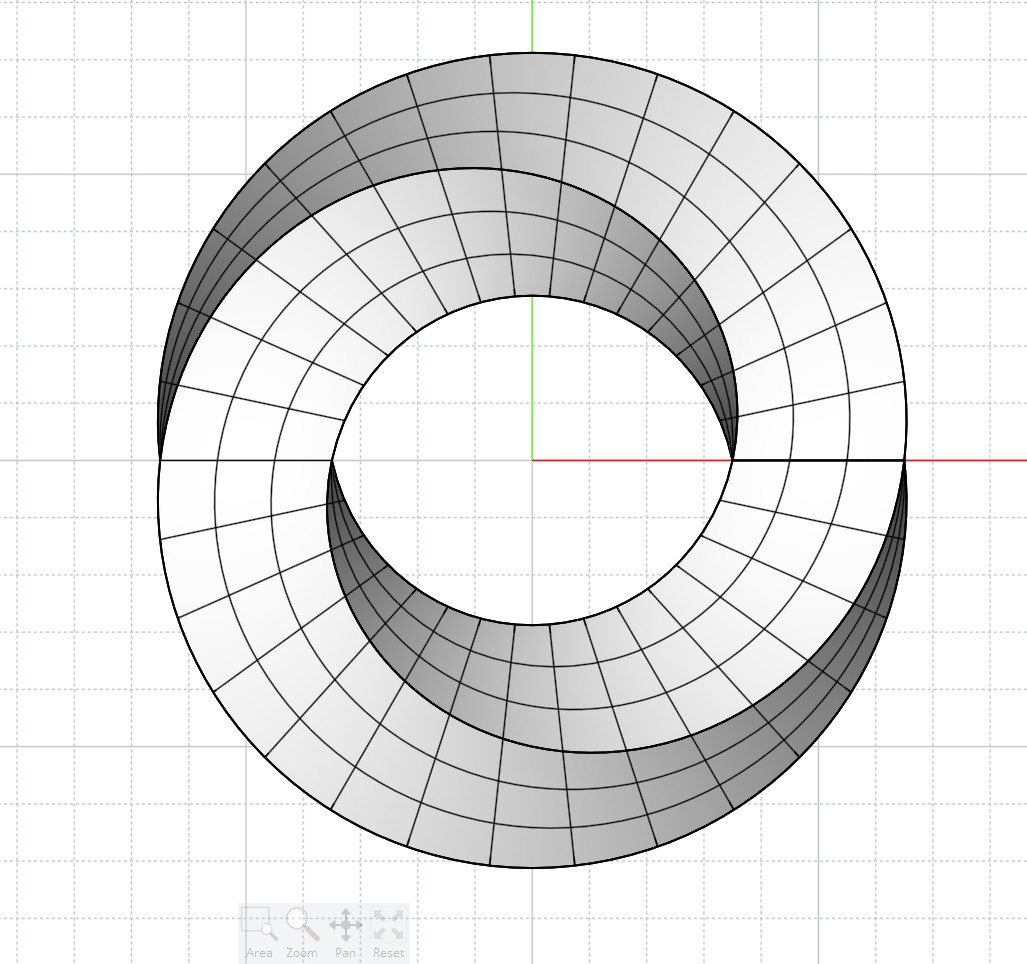 They are still straight, not curved. And they apparently continue over the edge. They are on the straight lines which start from the centerpoint and have equal angular spacing. One can probably use these facts and fix manually LeoNas' drawing in the other answer.

Program Moi3D allows exporting the result as wireframe PDF. Illustrator reads it, but it needs some fixing. Many curves are doubled because the grid edges are 2 in the same place. In addition PDF generator makes own extras. The next screenshot is taken in Illustrator. The garbage in the left has the redundant paths: 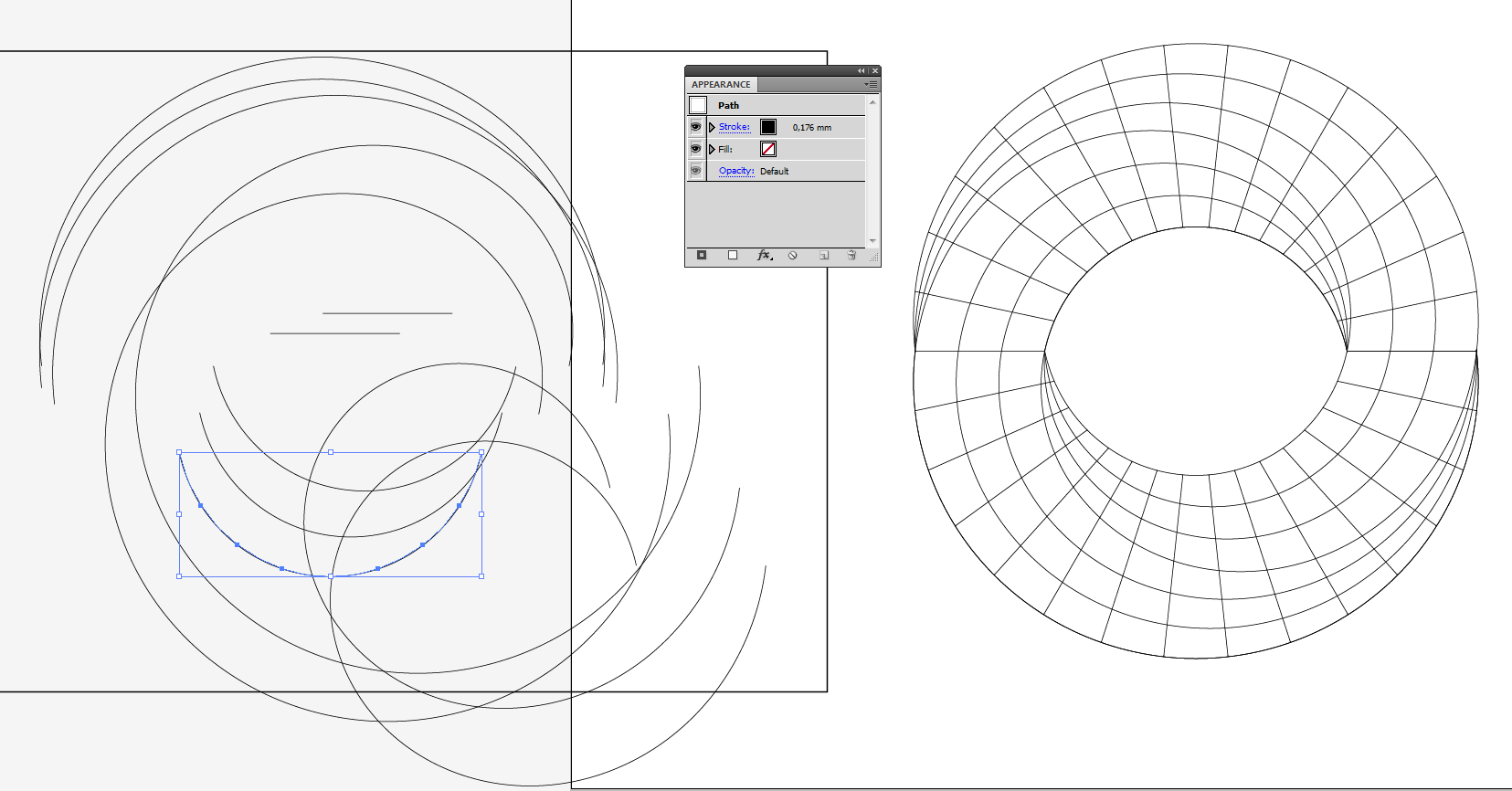 One method is still left: It can be drawn! Having my screenshot from Moi3D as reference one can draw a plausible copy fast. And there can be a shading and a denser surface division, if wanted: 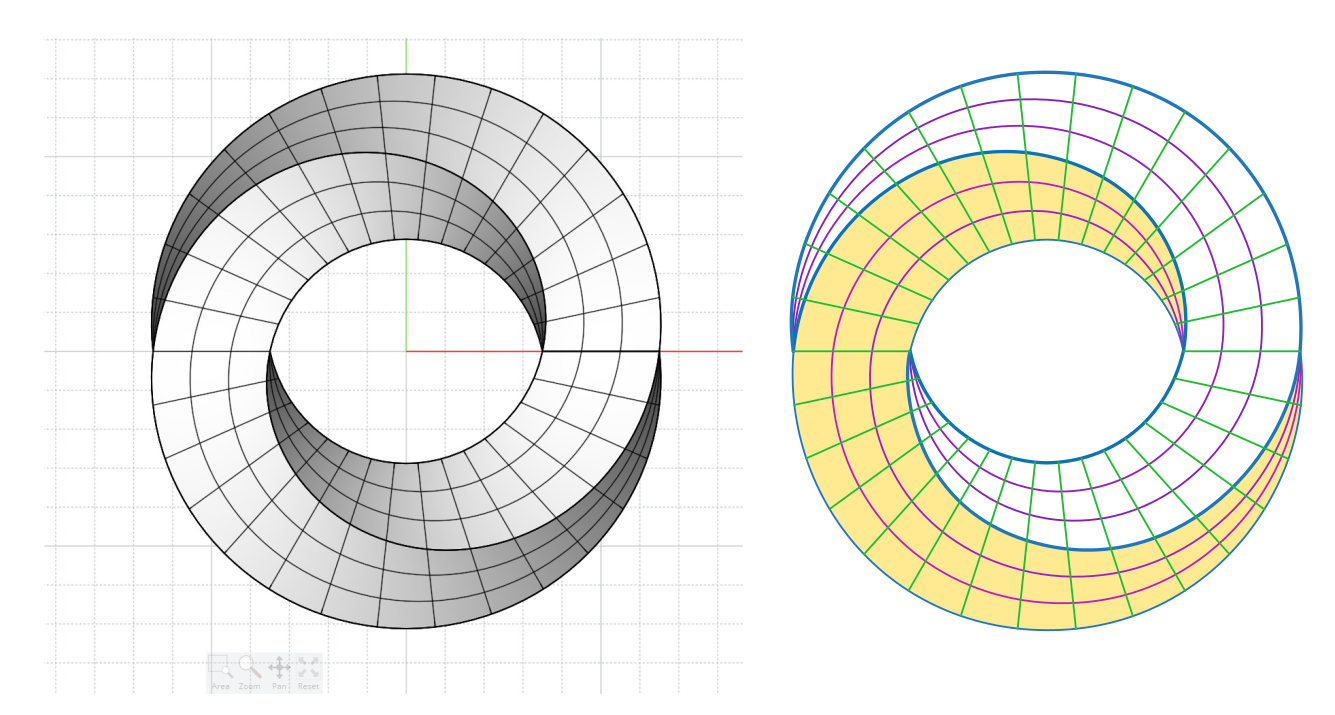 Actually only the blue edges around the yellow fill are drawn with the pen. They are coarse, but that cannot be seen after the original is moved aside.

The magenta intermediate curves are made with blending.

The radial lines are rotated copies of a horizontal line. Pathfinder panel has "Outline" which can be used to split the lines at the edge crossings. Copy the edges for it because they are splitted, too.

The extras are deleted after ungrouping and restoring a visible stroke. It's useful to place the lines to a different layer before splitting them because otherwise they make filling the bananas with color tricky.