It's not immediately obvious, but when you visit Adobe Color aka "Kuler", you'll notice that the hue of the color-circle is not evenly spaced:

As you can see in the image above, a regular hue spacing of 120Â° should result in Red, Green and Blue, when starting at 0Â°. Over at Adobe, there's a much bigger span between yellow and magenta, covering almost 180Â°. So if we point our "triad" at red, we won't get Green and Blue, but a Yellow and something closer to Teal instead.

That discrepancy is also reflected in the numerical-output. If you switch to the "Triad" mode and choose "HSV" as color-mode, you can easily observe this in the generated hue-values.

This phenomenon is also visible in the image, the hue-circle seems to be stretched at the orange colors and compressed at Green/Cyan/Blue

Is there a name for the effect that can be observed here? I've looked around for hue scaling but wasn't able to find anything. Since I was trying to replicate the color-harmonics in code, any mathematical explanation of what is going on here would be highly appreciated too.

Color harmony should be a visual thing and Adobe has tried to implement a math rule for producing visually harmonic color combinations. That math rule isn't shown as calculation formulas, we can see only the result - tweak one and the rest move.

The RGB color system nor it's HSV math presentation aren't models for how we see colors, but how the colors in the computer screen are produced. The parameters H,S and V (=B in Photoshop) are not visually independent. Change for ex hue, the perceived colorfulness and lightness vary.

I guess Adobe's color harmony generator isn't trying to place colors symmetrically on the color wheel, but tries to find combinations which are visually in balance for presentation purposes. As I wrote, the used rule isn't shown as math.

Seemingly the triad strategy that you considered faulty because the colors aren't uniformly distributed on the color wheel lets us tweak the result infinitely, but the hue differences in HSV are not 120 degrees. I guess this is caused by the complexity of the rule under the hood. I guess actual calculations are made in some preceptionally uniform color mode and the results are converted to HSV.

But the color wheel in the harmony generator is matched with their rule. There the angles between the colors are 120 degrees.

Adobes harmony generator gives also CMYK combinations. Unfortunately they assume that computer screen RGB color range is printable. What color is actually printed with certain CMYK numbers depends on printing process. Also Lab mode allows you to input numbers which are not displayable in RGB screens, the shown result is clipped to displayable range, but the numbers are not. These things show that Adobes harmony generator should be treated with care. I guess it's useful in HSV and RGB.

ADD: As a related idea I tried to make an uniform color wheel where all colors have same lightness and chroma and all of them are originally displayable in sRGB. Try to make it more colorful or brighter then something will be clipped. It's this (or what's imgur has left) 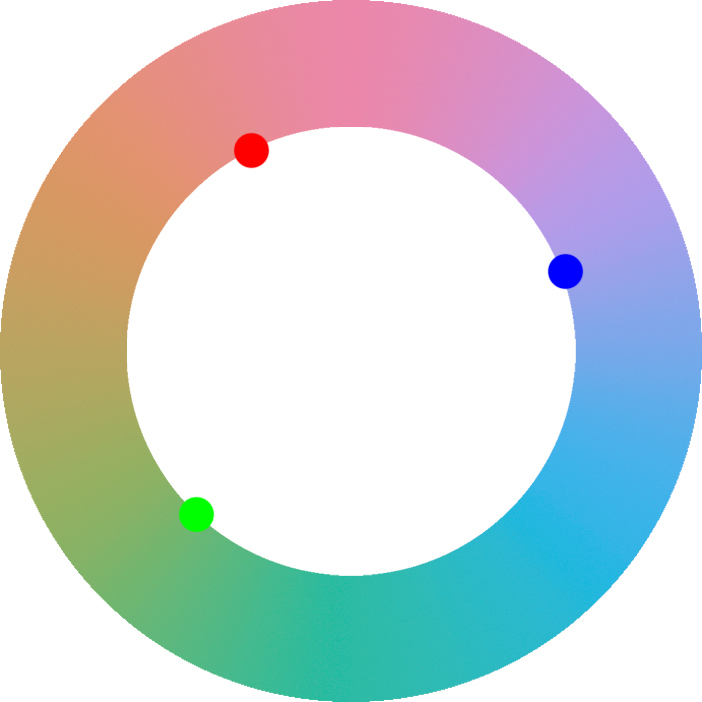 The colors are taken from GIMP. Its LCH color system is a polar implementation of the same ideas that Lab is based on. It was a linear gradient with stops at 0, 60, 120, 180, 240, 300 and 360 degrees in LCH hues. It's bent to circular. L and C are constant and so low that sRGB can show everything.

The hues of HSV system are placed differently than in the usual HSV circle. The dots show where are HSV hues 0 (=red), 120 (=green) and 240 (=blue) degrees. Their spacing is far from 120 degrees in this wheel.

At first the placement of the dots surely seems to be a damned lie. My blue dot is placed on something which is quite reddish. But try it yourself. Open the color selector in Photoshop or GIMP and take for example pure full bright blue RGB=0,0,255. In HSV (=Photoshop's HSB) that's hue=240 degrees. Turn the saturation lower and see how the color creeps towards violet. Nobody would claim it's blue. This shows that in RGB system hue, saturation and brightness are not visually independent. Lab and LCH are attempts to fix it.

Not the answer you're looking for? Browse other questions tagged color color-spaces mathematics adobe-kuler or ask your own question.

8
In color theory, what are primary and secondary colors?
3
How to get RYB complementary colors in RGB imaging software
2
Are there any colors besides black that will work with the tetris palette?
2
Change hue of image from one color to another
2
Why is azure used instead of teal as cyan in color mixing?
1
Blending Mode that imitates pigment secondaries
4
Is there a color system in which Red, Yellow, and Blue are primary colors?
0
How to divide circle of colors into named segments?
1
Do colors like these have a specific name OR special "category" of names for each?