Why is the effect called Dodge?

In the process of answering a question on Reddit, I got curious about why the Dodge and Burn tools are named as they are. I understand now the terms relate to photography, and "Burn" makes sense to me, since it's about over-exposing parts of the photograph to make them lighter, but where does "Dodge" come from? Is it because the photograph is "dodging" the light by being covered up during exposure?

The term originates in the photographers dark-room, and sadly I am old enough to have literally "dodged and burned" photos under the enlarger!

An "enlarger" is simply understood as a projector. It beams light through a negative and onto photographic paper. In much the same the way the lens of the camera "printed" the light onto the negative in the first place.

While this process is happening (and it takes a few minutes depending on exposure), you have an opportunity to vary the amount of light hitting the paper in different parts of the photograph. These techniques are called "dodging" (blocking light from an area) and "burning" making more light hit only a certain area (or blocking light from everywhere else if you will!)

The icons in Photoshop are amazingly accurate. A "pinched" hand to let more light through whilst covering the rest of the image (if supplemented by cardboard), and cotton wool on a stick will hold back light from a desired area - it simply "casts a shadow" and stops the light from hitting the paper. 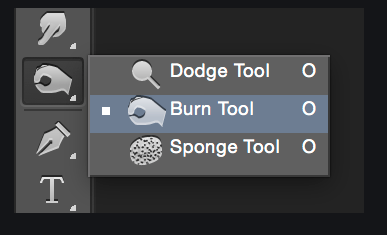 Dodging Dodging can be used performed using the hand or specific tools such as black cardboard. Dodging is best when used in a circular motion on the image to get the desired result. Dodging over an area has the effect of lightening that area. Specifically then - to answer the question - "Dodging" refers to the paper dodging the light (by way of a blocking mechanism)

Burning Burning is when the image receives more light (exposure) so the image can darken. Just like dodging, burning can be done by hand or by using objects that control the size and shape of the area. To avoid visible steps between the burned-in area and the rest of the image, the device should stay in motion.

Just to round out the answers so far, Billy Kerr found two early references to "dodge" in a photographic capacity in 1883 and 1889.

A manual of photographic chemistry : theoretical and practical by Hardwich, T. Frederick (1883):

An important advantage in this process is the following : That although it is one entailing the operation of a so-called “ development” — in truth, a substitution process — yet the undeveloped image is visible, and this to such an extent that not only is the proper time of exposure estimated by its appearance, but the important operations of “dodging” and “printing-in” are also easily carried out.

... If working on the back of the negative is resorted to, I would suggest covering the front of the printing frame with tracing paper; this will soften the outlines of the "dodging," and by diffusing the light before reaching the negative, will go far to make such working on the back a success. I always work with my printing frame so covered (using tracing linen to stand wear better), as I find another advantage from its use: it will often have been noticed when printing from a negative in which there exists very great contrast in some one part (say a tree in the foreground with very little detail), that in the positive, will be seen a white line, suggesting the criticism that "dodging" had been resorted to to make the tree print well, but so badly as to show its outline very plainly.

Both references use the term in quotes, and refer to it in passing with little explanation, indicating that it seems to have already been standard terminology. At this time, the most reasonable explanation seems to be that the term indeed originates from the idea of either the photograph "dodging" the light by being obscured behind cover, or by the movement of the blocking material in an effort to create soft edges.

ORIGIN OF DODGE First recorded in 1560–70; of obscure origin

In our darkroom we used to call it "blocking" the light, so the term "dodge" in Photoshop was quite foreign to me until I figured out what the feature does.

As an aside, we used all sorts of burn/dodge cutouts. Sometimes we would make a quick print, cut out the areas that needed to be dodged/burned and use the cutout as a perfect template during photo print exposure. The cutout template would be placed flat on the photo paper, and held with a tweezer or a piece of tape. Since it was not held somewhere in the air between the enlarger's light and the paper, perhaps "blocking" seemed a more natural word choice than "dodging".

"Feathering" was accomplished by shaking the template a bit during exposure. The amount of additional or withheld exposure was set by counting the seconds during which to apply the template. How much burn or dodge time was needed? That was determined by a separate "test strip" (a strip of photo paper), which we would expose in the dodge/burn area of interest, and we exposed sections of the strip by 1/4x 1/2x x2 x4 times the exposure. After developing the test strip we'd evaluate which amount of burn/dodge would yield the desired exposure.

Not the answer you're looking for? Browse other questions tagged terminology photography history or ask your own question.

6
What is the name of a photographic effect where there are subtle shadows in corners?
21
What's the term used when the first word of one page is repeated at the end of the previous page?
14
What are the origins of terms "em" and "en" as typographic units?
4
What are the gaps in a stencil called?
11
What are the dots at the ends of letters called?
2
What is Gmail's new login page effect called?
2
What was this 1970s scale drawing device called?
0
What is the visualisation in the picture called